Accessibility links
Trump Administration Will Send Asylum-Seekers To Mexico While Claims Are Processed Homeland Security Secretary Kirstjen Nielsen said Thursday that migrants entering the U.S. from Mexico — regardless of country of origin — must wait in Mexico while their claims are heard. 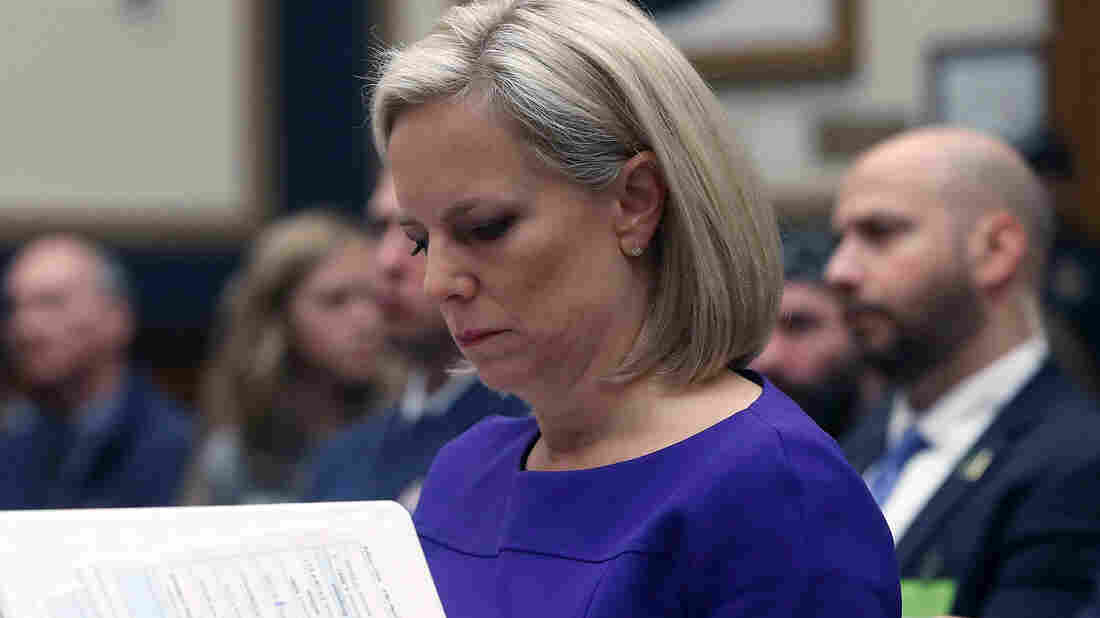 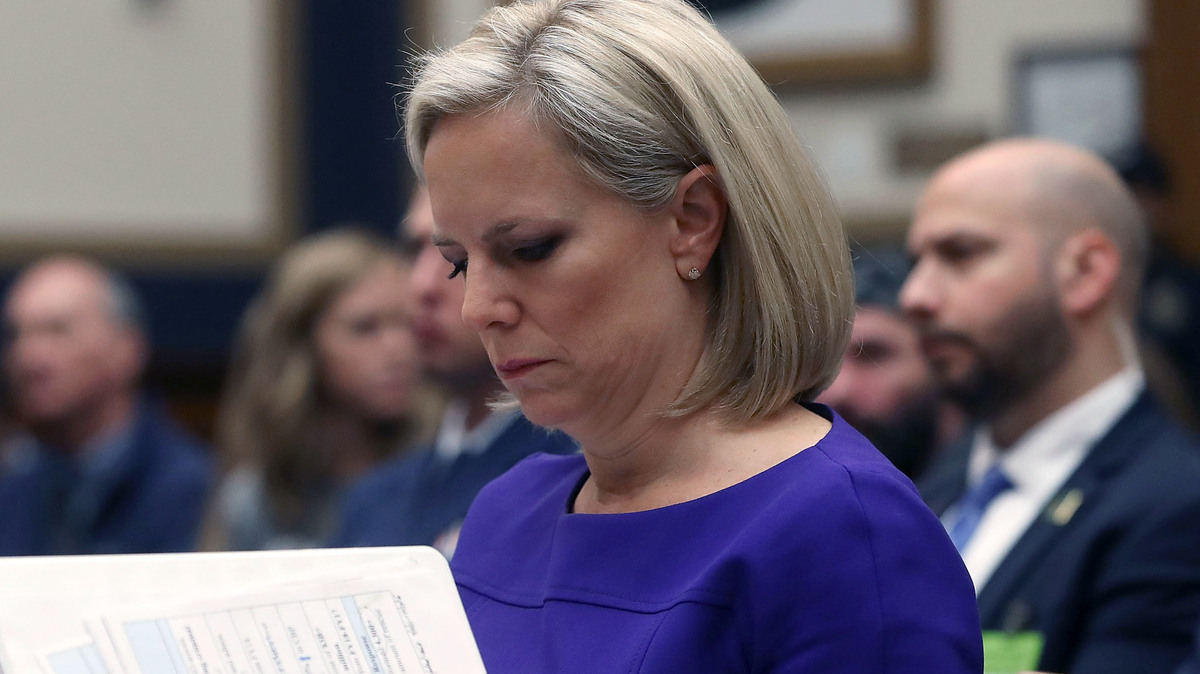 Homeland Security Secretary Kirstjen Nielsen looks at her papers while testifying before members of the House Judiciary Committee on Thursday in Washington, D.C.

Migrants who cross the U.S. Southern border and seek asylum will be required to wait in Mexico while their claims are being processed, Homeland Security Secretary Kirstjen Nielsen said Thursday.

Currently, most people requesting asylum are allowed to stay in the U.S. — sometimes in detention — while their claim is pending in immigration court. The new policy will send such migrants to Mexico for the duration of that process.

That's true regardless of the migrants' country of origin: Many people crossing the U.S.-Mexico border are not Mexican but are fleeing violence in Central America.

Seeking asylum means asking the U.S. to accept you — legally — because of persecution you are facing in your home country.

Crossing the border illegally is a misdemeanor; for a person who has already been deported once, it's a felony. Seeking asylum at a port of entry, however, is not a crime at all.

The right to seek asylum is protected by U.S. and international law.

The immigrants will still be interviewed by a U.S. asylum officer, but they will no longer be released into the interior with a notice to appear in immigration court. The Department of Homeland Security has long complained that many applicants simply disappear and never show up for their hearing.

Speaking before lawmakers on Thursday, Nielsen also emphasized that DHS cannot detain families with children for more than a few weeks under U.S. law, which is not enough time for an asylum claim to be processed.

Earlier this year, the Trump administration began separating children from parents who were being prosecuted for illegally crossing the border, a policy that horrified many Americans and was ultimately found to be illegal. Sending families back to Mexico would provide an alternative method for the administration to avoid releasing such families into the U.S.

Houston immigration attorney Ruby Powers just returned from Tijuana, Mexico, where thousands of immigrants are waiting in makeshift camps to apply for asylum at the San Ysidro Port of Entry. After learning of the sweeping DHS announcement, she said, "This is going to cause utter chaos."

Powers said migrant shelters in Mexican border cities are already full and can hardly handle asylum applicants who are told to return to Mexico and wait. She said immigration lawyers like her will find it logistically difficult to assist clients with their immigration cases since they will be in Mexico, some without phones or Internet.

"I think the ultimate plan is to prevent people from wanting to apply for asylum so they won't come to the United States," Powers said.

The Mexican government, while affirming its own sovereign rights to determine who enters the country, said it would allow the practice. Mexico also said it would extend some rights and protections to the non-Mexican asylum-seekers on Mexican soil who await immigration hearings in the U.S.

The migrants will receive humanitarian visas, have the opportunity to apply for work permits and have access to legal services, Mexico said.

This is a major policy reversal for the Mexican government, which has traditionally refused to accept third-country migrants from the U.S.

The new shift will very likely be seen as a capitulation by Mexico's new president, Andrés Manuel López Obrador, as he tries to maintain cordial relations with President Trump. The Trump administration said earlier this week that it will contribute nearly $6 billion toward Mexico's recently announced $30 billion development plan for the southern part of the country and three Central Americans countries, in hopes of creating jobs and opportunities so people from the region won't have to migrate.

Last month, The Washington Post reported that the Trump administration had reached a deal with Mexico to allow asylum-seekers to remain south of the border while their claims were processed. However, governments of both countries would not publicly confirm that a plan was in place, in part because the new president was days away from taking power.

The announcement on Thursday appears to confirm those early reports.

In late November, Lee Gelernt, an attorney with the American Civil Liberties Union, said there were questions about the legality of such a proposal.

"One thing we know right off the bat is that it cannot be legal unless they can assure all the asylum-seekers who will be stranded in Mexico ... will be safe — not only from persecution by state actors in Mexico, but by criminal gangs," Gelernt told NPR. "And from what we know about what's going on, we see no likelihood that that is going to be true."

On Thursday, Jacinta Ma, director of policy and advocacy at the National Immigration Forum, agreed that the proposal raises legal questions.

"I would definitely expect a legal challenge, especially seeing all the legal challenges filed against the Trump administration on immigration matters," she told NPR.

The news comes during a time of close national attention to issues of immigration and asylum, as Trump continues to denounce migration as a national security threat, and critics of the administration's actions accuse the White House of inhumane policies.

The recent arrival of a "caravan" of Central American migrants at the U.S. Southern border brought fresh attention to asylum-seekers, particularly after a clash between protesters and Border Patrol agents.

The death of a 7-year-old migrant girl in Border Patrol custody this month has brought fresh outrage to the debate, as did the killing of two Honduran teens last weekend. The teenagers were killed in downtown Tijuana, not far from a migrant shelter for unaccompanied minors, where they were staying while they waited to start an asylum claim with the U.S.

Meanwhile, Trump continues to seek funding for his border wall, which he had originally claimed would be paid for by Mexico. He recently said that Mexico is essentially paying for the wall through the new deal to replace NAFTA, a claim that is not true.