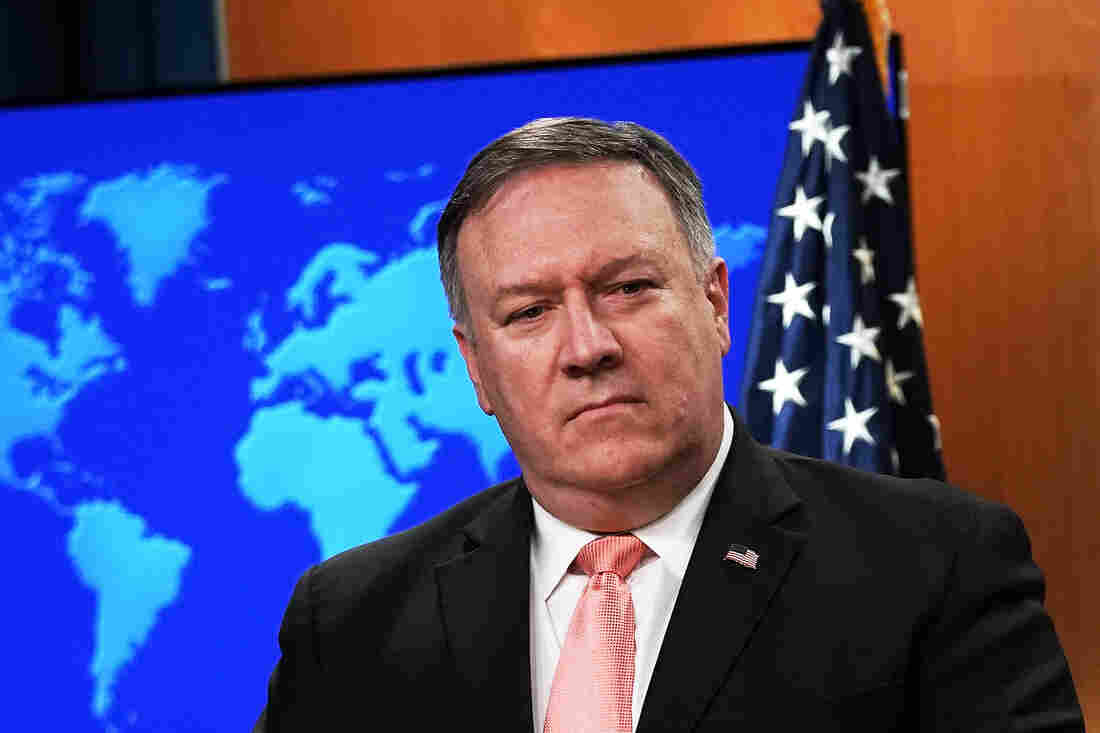 Secretary of State Mike Pompeo speaks to members of the media in the briefing room of the State Department on Oct. 23 in Washington, D.C. Alex Wong/Getty Images hide caption 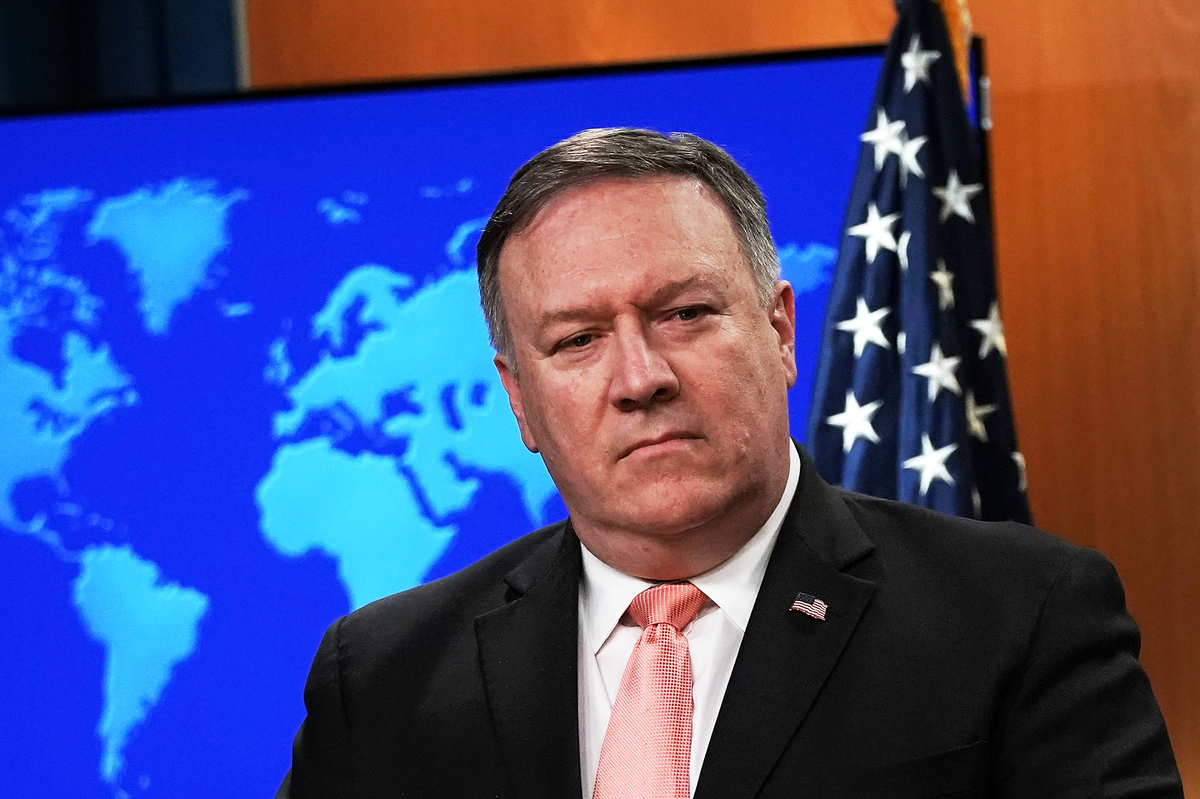 Secretary of State Mike Pompeo speaks to members of the media in the briefing room of the State Department on Oct. 23 in Washington, D.C.

Secretary of State Mike Pompeo: We've made the caliphate in Syria go away. We remember, you remember this, Steve, you remember cells with people in them being burned. The president made an enormous commitment to take down the caliphate. And that has been achieved. We now have the battle that is a longtime battle which is a counterterrorism battle not only against ISIS but against Al-Qaida and others — HTS, all the terrorist groups. President Trump remains just as committed today as he was yesterday and the day before and the progress that the Trump administration has made in defeating ISIS in Syria is extraordinary, and we're very proud of that accomplishment.

Pompeo: The U.S. Has Made 'Caliphate In Syria Go Away'

When U.S. troops leave eastern Syria, of course U.S. allies, Kurdish groups, will remain in eastern Syria. What obligations does the United States have to its Kurdish allies?

Here at the State Department we've been working diligently for a long time, including the entirety of my time in service here, to achieve the U.N. process led by Staffan de Mistura and now by his successor to get a political outcome in Syria that takes down the threat, the threat of violence, that attempts to create the conditions for what is now over 6 million displaced persons, some of them internal to Syria, some of them in Lebanon, Jordan and Turkey. We are committed to that. Ambassador Jeffrey is hard at work trying to implement...

Jim Jeffrey is the envoy for Syria.

Well let's talk about the Russians and the Turks. The Turks, who of course have been hostile to the Kurds, have already said they're preparing to move into eastern Syria. The Russians have said...

Would you warn the Turks against attacking the United States?

The history between the Turks, the history between the Turks and the... just, we have to, there's a lot of history, Steve, some folks want to just talk about what happened this morning. The history between the Turks and the Kurdish is a long one. It is a complicated one and the United States is deeply aware of the set of relationships there. And we have a very clear mission set. Our mission set in Syria was the defeat of the ISIS caliphate. We continue to push back against ISIS in West Africa, in Afghanistan, all across the world. That threat certainly is out there, the president has acknowledged that. He has also acknowledged the administration's continued commitment to that defeat, something that the previous administration could not accomplish.

But I'm asking about something a little different here. The Russian Foreign Ministry has said in the last day that the withdrawal of U.S. troops creates good prospects for a peaceful solution and they gave the example of Aleppo, where the Syrian government backed by Russia went and destroyed U.S. allies and took over. Would you warn the Syrian government against moving against the Kurdish allies that you're leaving behind?

I don't give much credit to the Russian statements on much of anything to be honest with you, Steve. Here, here's, here's what I know. The United States made a commitment. We led a global defeat ISIS campaign to take down the caliphate in Syria. We hae achieved that. The effort that, I've spoken to European counterparts, Middle Eastern counterparts over the last week to 10 days, this effort, this defeat ISIS coalition remains. And we are clear-eyed about the risks to the United States from terrorism. And we will yield to no one in our efforts to defeat it.

On terrorism. No commitment to U.S. allies left behind in Syria.

We always have commitments to our allies. We've done this relentlessly. You all report it differently, Steve. I get it. I get, I get the game. But you all report this differently. The, the, the American commitment to our allies — not just in this situation, but all across the world — you report that America is withdrawing from the world, when in fact just the opposite has taken place. President Trump and our State Department has led a global American leadership campaign that is unrivaled. We're incredibly proud of it. Our allies see that. We stare at things that don't work anymore and we demand that they begin to work. This is not only in the best interest of America but our allies as well, Steve.

I'll just mention I know time is short, but we can set aside, if there's a specific NPR story you ever think is wrong. Let us know.

Believe me, I assure you I'll do that.

Let me ask about another subject. Has North Korea's Kim Jong Un let you down?

We've known from the very first trip that I took when I was in a previous role that the challenge of denuclearizing North Korea was not one that would be something that would be easy or without bumps in the road or would occur in a way that was, like instant pudding. The world doesn't quite work that way. We have diplomatically, relentlessly worked to support the president's mission statement, which is to denuclearize North Korea. We got the commitment from Chairman Kim. We've made some progress. There remains a long ways to go but we are we are hard at it even today.

But they haven't agreed to give an accounting of their nuclear weapons, which is something you wanted. And as time passes they're beginning to get concessions. North and South Korea are talking about reopening roads and railroads. The United States is working to loosen travel restrictions. North Korea is getting benefits without giving things up.

The North Koreans have not suffered an economic sanctions regime like the one that the Trump administration has imposed and continues to impose. Ever. Ever, Steve. I mean you say things and they're just unfounded, Steve. You say we're going, we're going to loosen travel restrictions, when if you read the statement very clearly we're working to make sure that humanitarian assistance can be delivered.

It is a narrow, yeah.

It's in the statement, Steve. Don't read half of it, read it all.

I read it all.

It's important because this has deep connotations. You're suggesting to your listeners that somehow we're relaxing the economic sanctions campaign. Nothing could be further from the truth. The truth of the matter is that we are very consistent with what we've done before, making sure that where there is real need, real humanitarian need there, that we don't deny that to the people of North Korea. And sometimes it takes getting an American to be able to travel in there to achieve that and where that's the case we want to facilitate that.

I think it is fair to say they, however, have been evasive. They've been canceling meetings with your diplomats. Has Kim Jong Un let you down?

It's been a great process. They're not firing rockets. They're not conducting nuclear tests. We have a ways to go and we will continue to achieve, to work to achieve the president's agenda.

Second summit is going to happen?

OK. Let me ask about another thing briefly because I know this is something where you're making an announcement as we're speaking, having to do with the way that asylum seekers will be treated.

They'll be kept south of the U.S. border while they apply for asylum, which is something the administration has been working toward. There is a related matter that you commented on the other day. You said ideally you would cut off the flow of asylum seekers. They would not be coming out of Central America. What is the U.S. government doing to improve conditions in Central America, if anything, so that there are fewer people heading north?

Yeah, so the program that you spoke about that, Secretary Nielsen and I are announcing this morning is a fundamental shift. It's consistent with U.S. law and more importantly it is deeply consistent with the protection, the humanitarian protection of these migrants as they transit their way through Mexico. We will, we will no longer permit those who are seeking asylum to remain inside the United States during the pendency of their immigration process. They'll file a claim and then they will be returned to Mexico. The Mexican government will be, has, or shortly will be issuing a statement talking about how they will ensure that those migrants are protected and that they'll get access to counsel, visas, if they need them. This is both deeply lawful and deeply humanitarian.

With respect to reducing the flow, we think this will help. We think this will disincentive folks who think that if they can make the transit through Mexico, a very difficult and arduous journey where terrible things often happen to these migrants, we think they will realize that they won't be able to stay in the United States and disappear into our country. Something we do think creates an incentive for them to come here. So we think this alone will greatly reduce the migration flows and then we made an announcement on Tuesday about efforts that will make commitments, financial commitments, for good projects that, we hope, will lead to conditions where fewer folks will want to leave Guatemala, Honduras, El Salvador, and make this arduous transit.

And that's in U.S. interests to invest in Central America?

What would you say, Mr. Secretary, to officials in China or North Korea or Iran for that matter who may feel that they should try to outwait the Trump administration? That the president will not be here forever, that he's been politically weakened lately?

I don't talk about politics. I'm hoping I get to be the secretary of state for six more years.