Accessibility links
1968: When Apollo 8 First Orbited The Moon And Saw The Earth Rise In Space On Dec. 21, 1968, the Apollo program's second manned spaceflight lifted off from Earth to orbit the moon. Many people still remember the greetings from astronauts, sent from space. 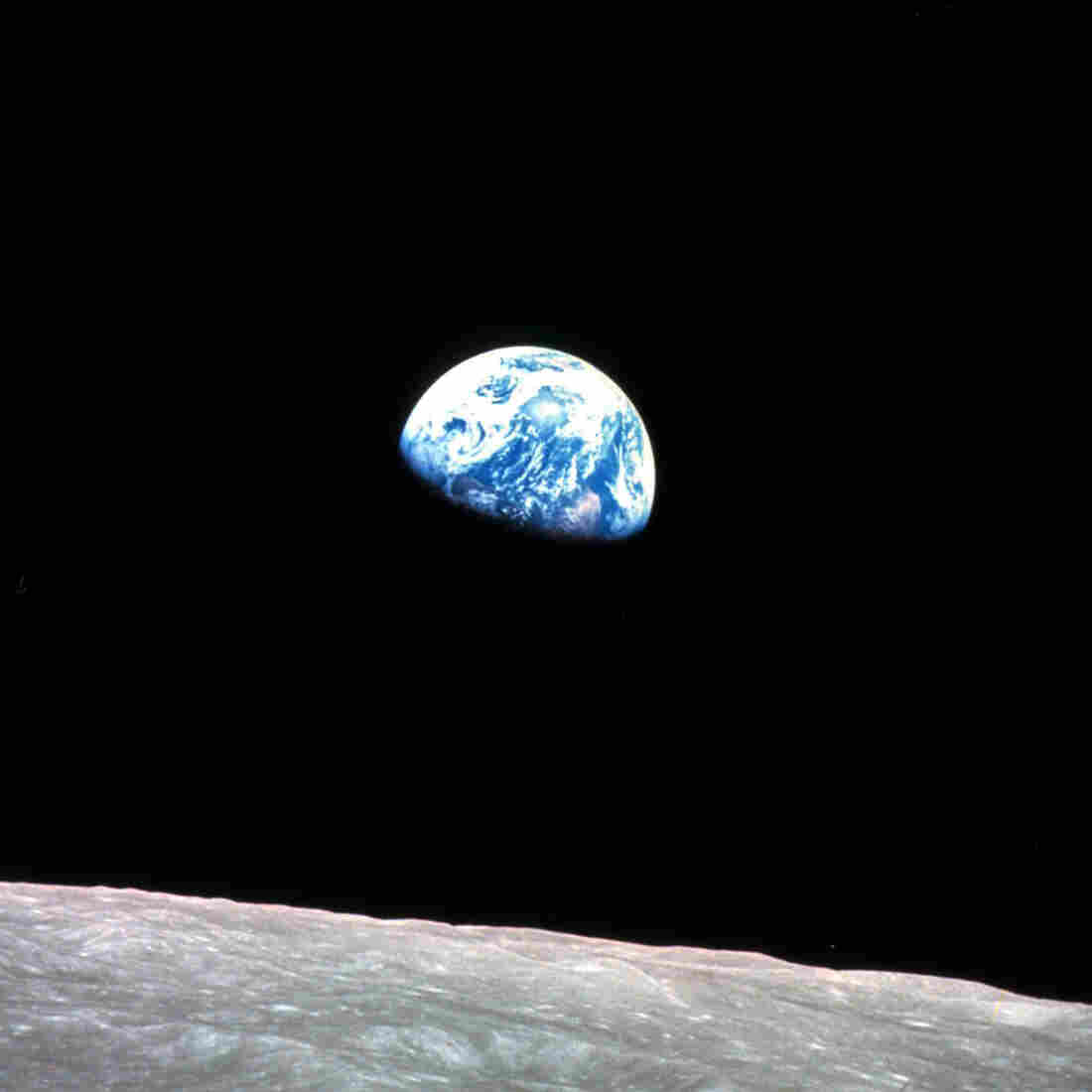 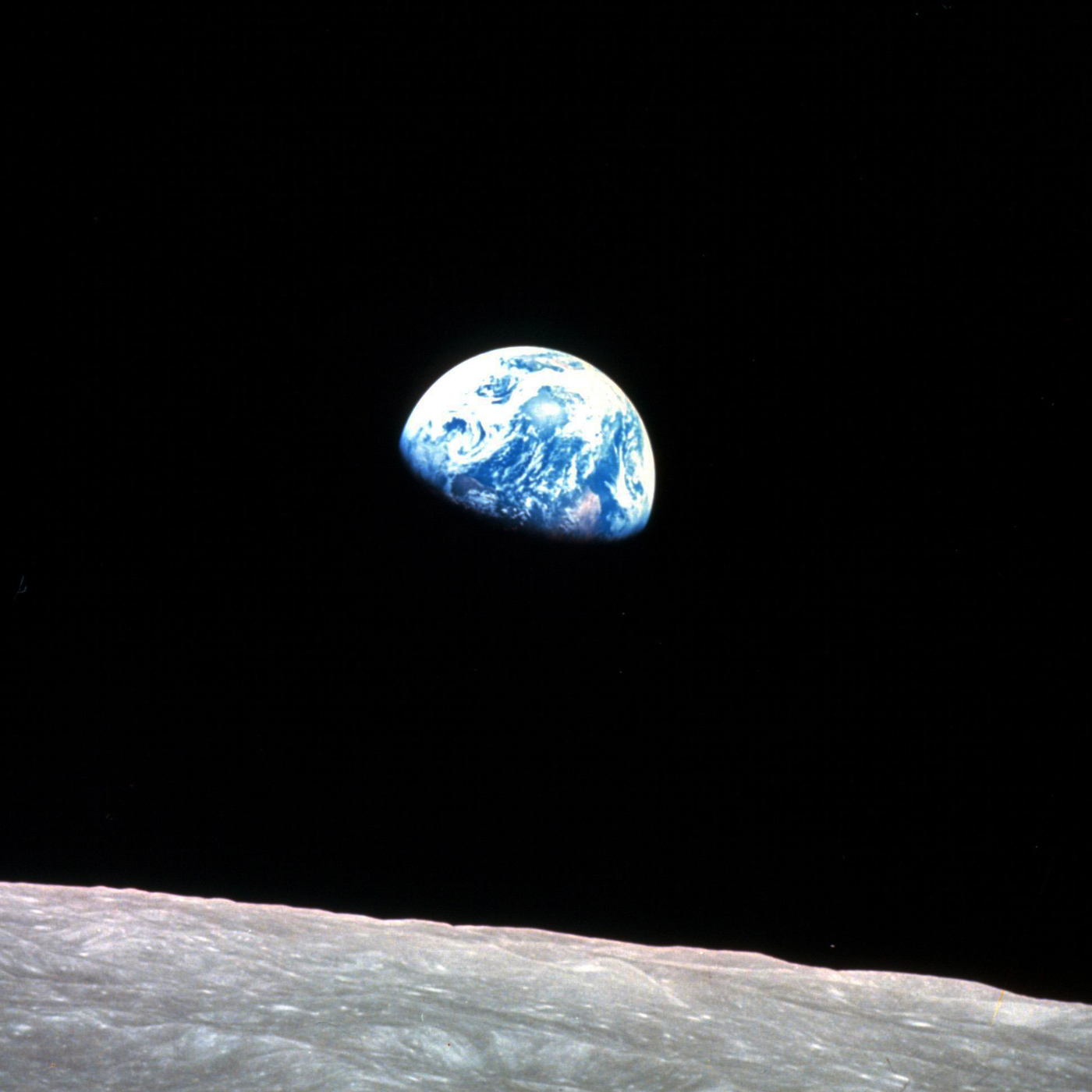 The iconic "Earthrise" image taken by astronaut Bill Anders on Apollo 8 on Christmas Eve 1968. Friday marked the 50th anniversary of the Apollo 8 liftoff.

Fifty years ago Friday, on Dec. 21, 1968, Apollo 8 lifted off, marking the first time humans left low Earth orbit and flew to the moon.

This was the second manned spaceflight of the Apollo program, and it was a nerve-wracking and remarkable flight that captured the world's attention. The mission capped a difficult and conflict-filled year in the U.S., offering a rare moment when people could feel good about their planet.

Any trip to space is risky. But a mission to the moon, nearly a quarter-million miles from Earth, was something else. There were many things that could go wrong and many unknowns about this first trip. But on Christmas Eve 1968, the capsule made it to lunar orbit.

The U.S. and the Soviet Union had spent the 1960s locked in the space race, and getting to the moon first was a thrilling achievement for most Americans.

But 1968 was an especially turbulent year in the United States. The Vietnam War was raging. Both Robert Kennedy and Martin Luther King Jr. were assassinated. Protests roiled the Democratic National Convention.

During the six-day mission those things seemed to fade away as people were captivated by what they saw and heard.

On Christmas Eve, on what was at the time the most watched TV broadcast, crew members Frank Borman, Jim Lovell and Bill Anders read a passage from the Book of Genesis:

"For all the people back on Earth, the crew of Apollo 8 has a message that we would like to send to you. 'In the beginning God created the heaven and the earth. And the earth was without form, and void; and darkness was upon the face of the deep.' "

There was also an unexpected moment during the 20 hours they circled the moon. As they focused on the lunar surface below, something else caught the crew's attention.

"Oh my God, look at that picture over there! It's the Earth coming up. Wow, is that pretty!" exclaimed Anders.

Anders rushed to snap a picture of the Earth, rising above the barren lunar landscape. The "Earthrise" image remains one of the most famous ever taken in space, and Anders says it forever changed the way people think about where we live.

"The only color that we could see and contrasted by this really unfriendly, stark lunar horizon, made me think, 'You know, we really live on a beautiful little planet,' " he says.

It wasn't just the crew of Apollo 8 that reflected during the flight. Author Robert Kurson wrote about the mission in a new book, Rocket Men. He says something unusual happened afterward: "At the end of 1968, when Apollo 8 splashed down, you saw hippies hugging old men in the streets. Something that was unthinkable just six days before that."

Kurson says that with the Apollo 8 mission, the political difficulties of 1968 washed away, for a while. In an interview with NPR earlier this year, Borman, the mission commander, noticed the same thing. "The only telegram I remember out of all the thousands we got after Apollo 8 said, 'Thank you Apollo 8 you saved 1968,' " he said.

Borman says there are a lot of parallels between 1968 and 2018, specifically how divided the country is — the anger, frustration and mistrust. He wishes there was something on the horizon today like Apollo 8 to bring people together.