Accessibility links
Aaron Sorkin Brings 'To Kill A Mockingbird' To The Broadway Stage After lawsuits and pushback from Harper Lee's estate, the beloved 1960 novel is now a play. But Atticus Finch looks and sounds a little different than he did in the book. 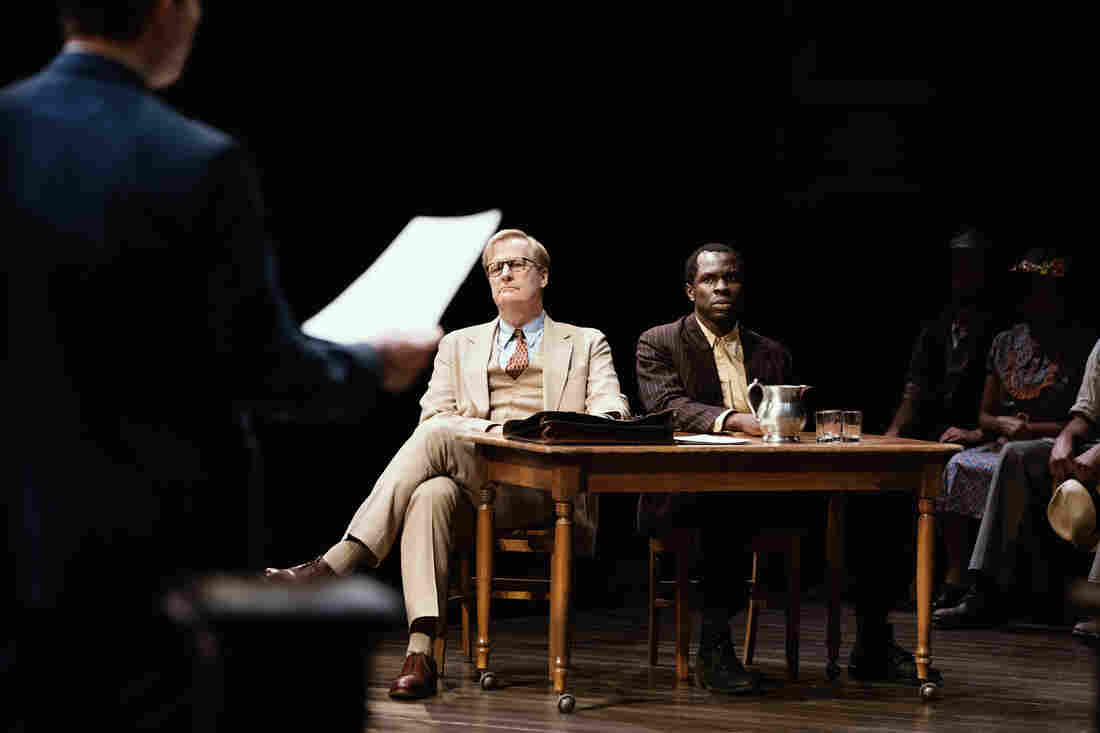 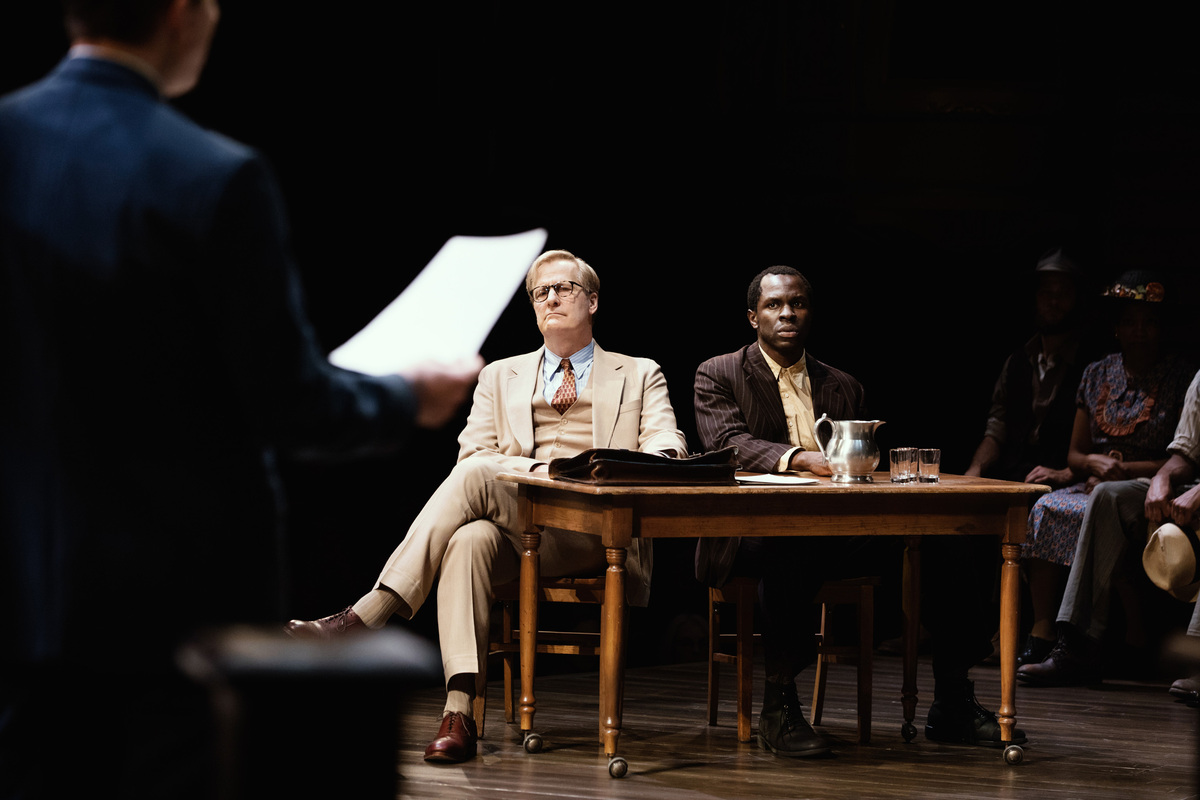 The new Broadway adaptation of To Kill a Mockingbird features Jeff Daniels as Atticus Finch and Gbenga Akinnagbe as Tom Robinson.

When Aaron Sorkin first sat down to write a stage adaptation of To Kill a Mockingbird, it didn't go well.

"My first draft of To Kill a Mockingbird was terrible," he says. "Really the best thing that you could say about it was that it was harmless — which is not something you want to say about a play."

This is the guy who made The West Wing and The Newsroom and who wrote A Few Good Men and The Social Network. And here he was taking on a classic — one that deals with race, sexual violence, the failures of the legal system and one man who has to navigate all those.

So after Aaron Sorkin turned in his first draft — the terrible, harmless one — he made a decision.

"I'm not going to swaddle the novel in Bubble Wrap and gently transfer it to a theater," he says. "It wasn't going to be an homage or an exercise in nostalgia. This was going to be a new play."

Quick recap: To Kill a Mockingbird takes place in 1930s Alabama. The book, by Harper Lee, is a coming-of-age story about a little girl named Scout. She witnesses her father, Atticus Finch, try to defend a black man, Tom Robinson, who is falsely accused of raping a white woman.

In the book, Scout sees her father the way any kid might see her dad: heroic, valiant, perfect. The play takes a more measured view.

"Many, many years had gone by between the first time I read the book and rereading this book a number of times for this play," Sorkin says. "And I kept being disappointed in Atticus."

Specifically, he noted the way the character holds empathy for others above everything else. 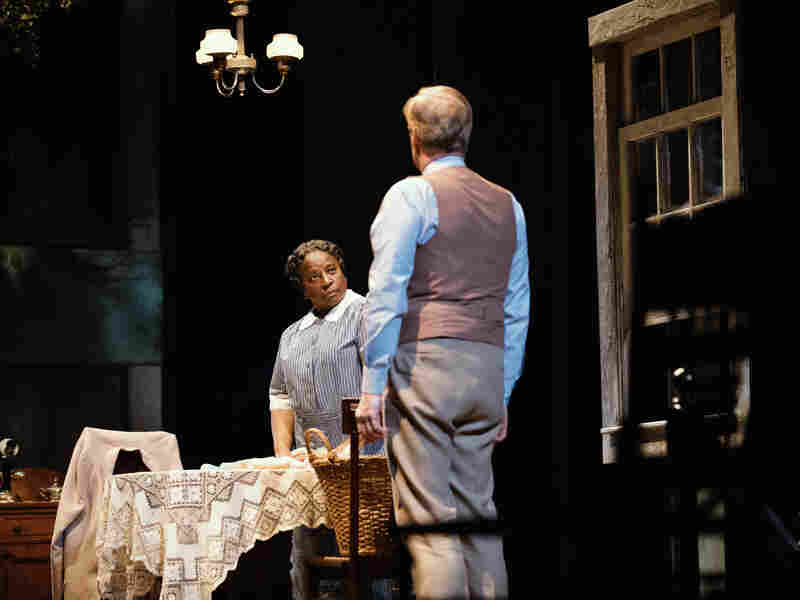 LaTanya Richardson Jackson, who plays the maid Calpurnia, said she consulted with playwright Aaron Sorkin about the roles of black characters in his adaptation of To Kill a Mockingbird. Julieta Cervantes hide caption 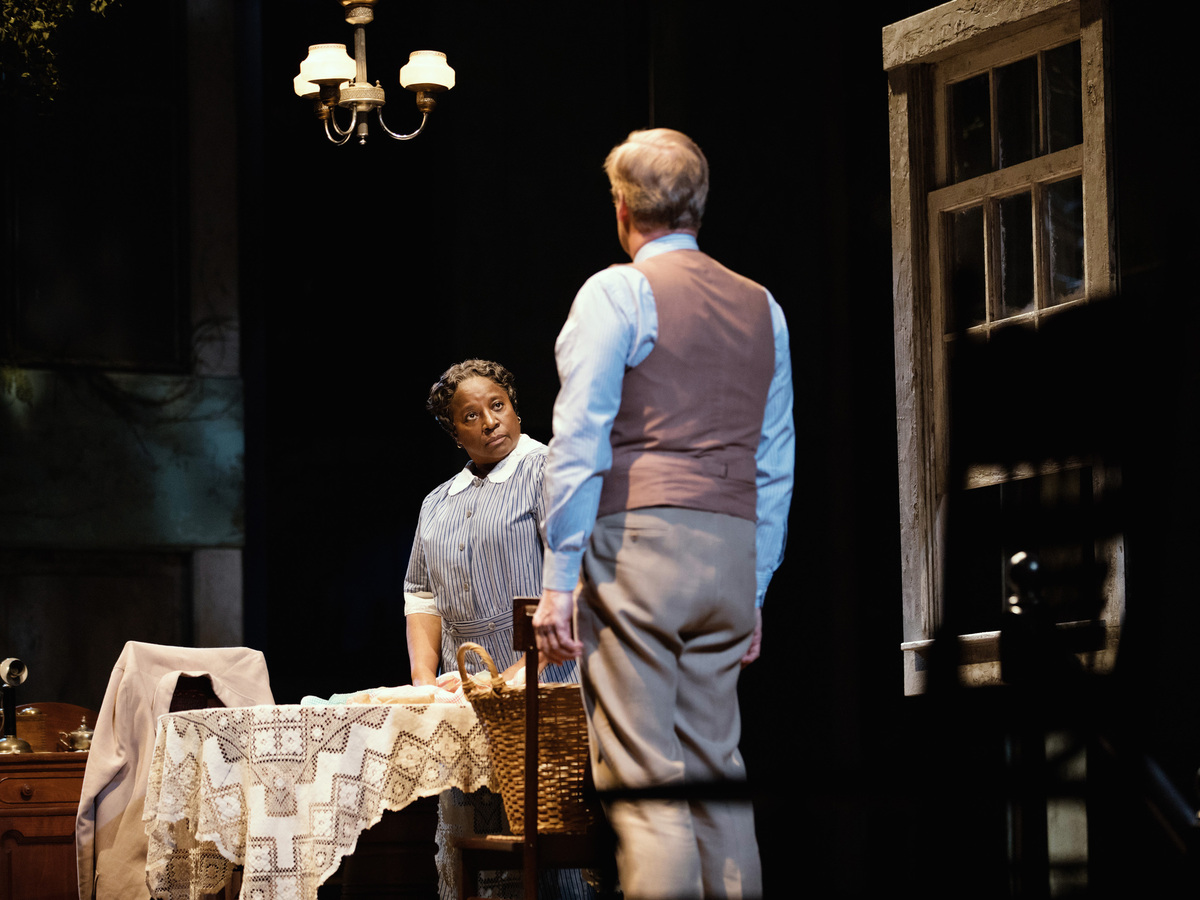 LaTanya Richardson Jackson, who plays the maid Calpurnia, said she consulted with playwright Aaron Sorkin about the roles of black characters in his adaptation of To Kill a Mockingbird.

It's an idealized version of the world, says LaTanya Richardson Jackson. She plays Calpurnia, the maid and cook of the Finch house.

She had discussions with Sorkin about the role of the black characters in Mockingbird and about how to get their input in a story in which the source material largely glosses over them.

"It is frustrating for Calpurnia that Atticus refuses to see that these people, whom he keeps giving all this credence to being good people, are not good people," Richardson Jackson says. "They just aren't."

Jeff Daniels plays Atticus in the new play. "Conscience can be exhausting," his character says. "It'll keep you up at night."

"Not only is Tom Robinson's fate on trial, but so is Atticus' belief in goodness, belief in other people, belief in generosity, belief in decency, civility, compassion, doing what's right," Daniels says. "All of those things are on trial, and he has to fight for those beliefs."

Kim Parker is an educator at the Shady Hill School in Cambridge, Mass. She has taught To Kill a Mockingbird in class.

"To even say that you don't like the book or [that] you think we should teach other books, you would think that we have committed some cardinal sin," Parker says.

Parker is also a co-founder of Disrupt Texts, a group that challenges teachers to think about books in the assumed classroom canon — books such as To Kill a Mockingbird.

"There's such a nostalgia around that book," Parker says. "It has meant something to my students' parents when I was teaching white students, and even some black parents also. And they don't want to think about: 'Oh, maybe Atticus isn't the best example of justice' — because he could've done more, but he didn't. And yet we still validate him; we hold him up as this hero."

That the Atticus of the play isn't completely perfect and righteous was one of the sticking points in the legal battle that faced this production.

Long story short, Harper Lee gave permission to producer Scott Rudin to adapt Mockingbird for the stage. In her will, Lee appointed Tonja Carter as her personal representative.

After Lee died in 2016, Carter saw a draft of the script that she thought deviated too far from the original source material. What followed was a long back-and-forth of lawsuits and countersuits and Rudin threatening to have the cast perform the play in the courtroom to prove that it tracked with the novel. The parties ended up settling.

Like any adaptation, some of the original source material gets tweaked slightly. In the book, we never get to see Atticus Finch meet Tom Robinson — we do in the play.

But Aaron Sorkin did make some concessions to his script.

At the end of the day, Atticus is still basically Atticus. And 60 years later, Mockingbird still has something to teach.

Charles Costello teaches religion at Bergen Catholic High School in New Jersey. He took a group of students to see a preview of the show.

Even though there's already a movie to go along with the original book, Costello says it's worth it to see the lessons of Mockingbird come alive on stage.

That holds true even — or especially if — Atticus is the one doing the learning this time.