Accessibility links
For Evangelicals, A Year Of Reckoning On Sexual Sin And Support For Donald Trump Evangelicals in 2018 had to defend their views on sexual sin, given their willingness to overlook Donald Trump's infidelity and reports of sexual misconduct by their own pastors. 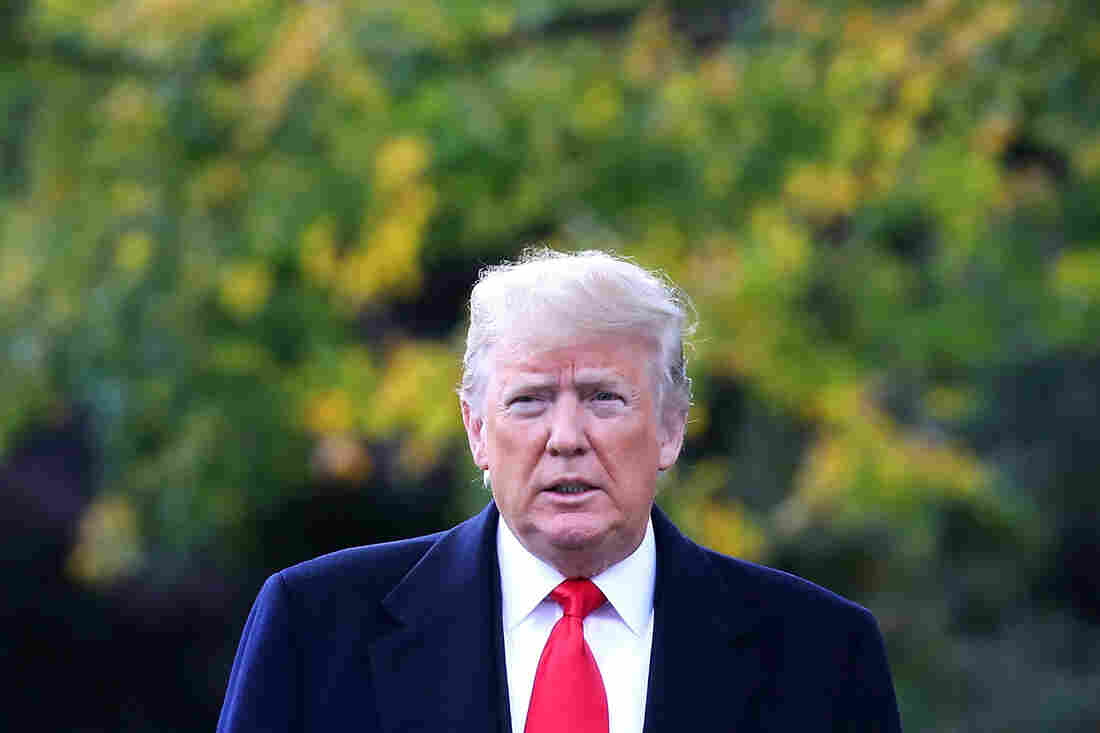 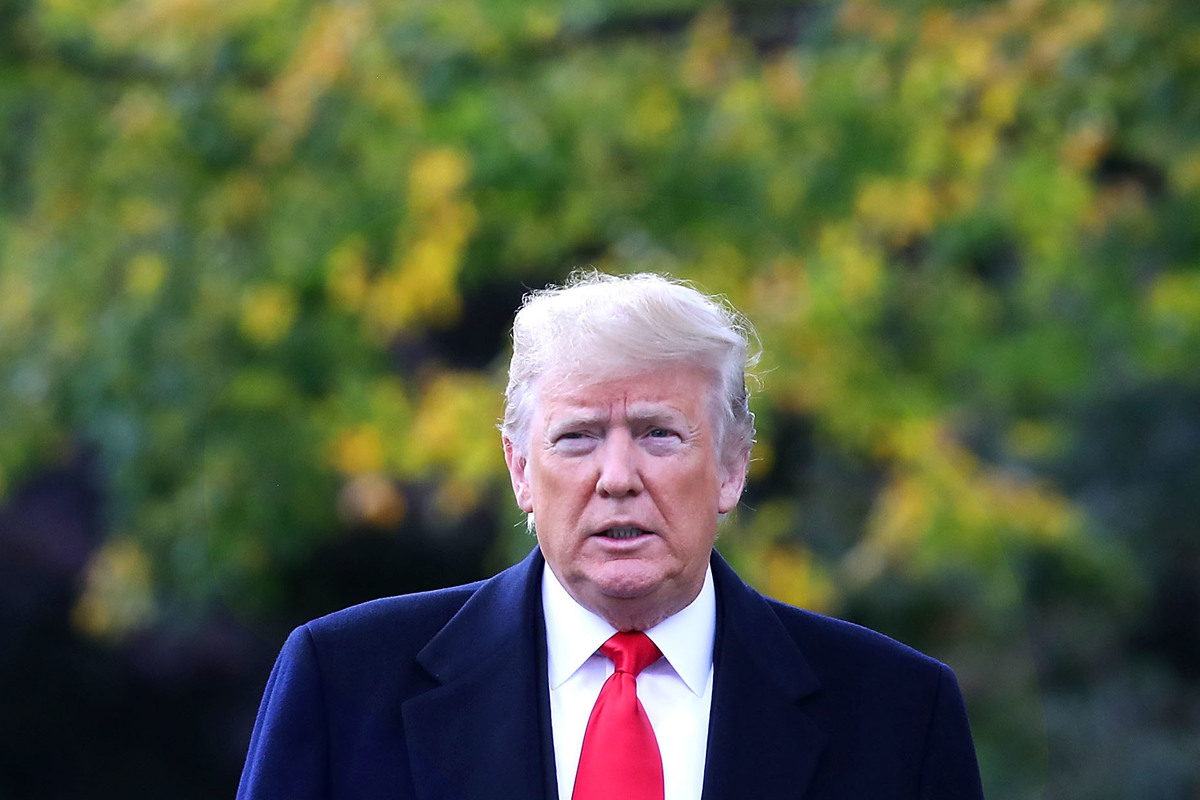 An overwhelming majority of evangelical Christians continue to support President Trump, despite allegations of infidelity.

Americans in 2018 got an overdose of stories about marital unfaithfulness. President Donald Trump was accused of making hush payments to at least two women with whom he allegedly had affairs, and the #MeToo movement highlighted sexual misconduct at all layers of U.S. society.

For conservative Christians, such stories were especially disturbing.

"Evangelical Protestants very much subscribe to the idea that sexual sin is the mother of all sin," says Samuel Perry, a sociologist of religion who trained at an evangelical seminary. "It is the most dirty, the most damning, the most shameful."

Despite that reputation, evangelicals this year repeatedly found themselves having to defend their views on the seriousness of infidelity. About 80 percent of white evangelical voters backed Trump in 2016, and exit polls from this year's mid-term election showed little or no erosion of that support.

They stayed with the president even after an adult film star, Stormy Daniels, and a former Playboy Playmate, Karen McDougal, came forward with detailed accounts of their sexual encounters with him during a period when he was married.

"I've not heard of any evangelical leader who has said that [Trump's] marital unfaithfulness was acceptable or anything but morally wrong, sinful, and [needing] to be repented of," says Wayne Grudem, a professor of biblical studies at Phoenix Seminary in Arizona.

Like most other evangelicals, however, Grudem says he's a supporter of Donald Trump.

"I strongly disapprove of adultery and being unfaithful in marriage," Grudem says, "but I still support [Trump's] actions as president. I'm glad he's president, and I would vote for him again."

Grudem and other evangelicals who support Trump often cite his appointment of conservatives to federal judgeships. They believe these judges will make decisions that further their evangelical agenda, including the restriction of abortion rights.

Others, like James Dobson, founder of Focus on the Family, justify their pro-Trump views with the argument that he has changed in recent years and become a 'born again' Christian.

A further mismatch in the evangelical world between questionable sexual behavior and conservative sexual views was highlighted when numerous women came forward this year to reveal misconduct by their own pastors. An eight-month investigation by reporters at the Fort Worth Star-Telegram uncovered hundreds of sex abuse allegations at independent fundamental Baptist churches around the country.

In addition, prominent evangelical preachers in Tennessee and Illinois this year were forced to resign in the aftermath of allegations made against them, and a conservative seminary president was dismissed from his leadership position after reports that he told a rape victim to forgive her assailant and approvingly quoted a lewd comment about a 16-year-old girl in his congregation.

Such stories, combined with evangelicals' willingness to overlook Donald Trump's extramarital affairs, have prompted some church critics to accuse evangelicals of hypocrisy in their attitudes toward sexual sin. Evangelical theologians find themselves under pressure.

Grudem, a former president of the Evangelical Theological Society, has a simple explanation for sexual misconduct among Christians and in the people they support.

There's an understanding [among evangelicals] that God designed men to be natural sexual initiators.

"Sin!," he exclaims, as though the answer should be obvious. "I mean, there is sin in the human heart, and people in positions of power may think they can get away with it."

This is not a trite observation. Evangelicals in particular emphasize their dark view of human nature, often citing Romans 3:23: "All have sinned and fall short of the glory of God." Everybody, from presidents to pastors, is in need of grace and forgiveness.

Men, meanwhile, are seen as especially prone to sexual sin.

"There's an understanding [among evangelicals] that God designed men to be natural sexual initiators," says Samuel Perry, who now teaches religious studies at the University of Oklahoma. "Being an evangelical man and confessing to being somebody who makes sexual mistakes almost validates your masculinity," he says. "It's indicative of, 'Look, I'm a man, I'm a red-blooded man who struggles with sin like everybody else. And I'm dealing with it.'" Perry lays out his views in a forthcoming book, Addicted to Lust: Pornography in the Lives of Conservative Protestants.

In this view, it is not surprising that a man engages in sexual misconduct. It may be wrong, but it is understandable. Some evangelical men holding this view choose to follow the so-called Billy Graham Rule: Never be alone with a woman who is not your wife.

One problem with such a rule is that it limits the work that men and women can do together, a consequence that evangelical women like Nancy Beach are now lamenting.

"We [have] come to this moment in our culture and sadly in our churches where so much seems broken between the genders," Beach said in remarks to a forum on sexual violence this month at the Billy Graham Center at Wheaton College.

Beach, a former teaching pastor at Willow Creek Community Church near Chicago, is one of several women who accused Bill Hybels, the church founder, of having made improper advances

"Our fear of potential moral failure may well drive us to conclude that the answer is to go back to our safe comfort zone," Beach said, "to separate the genders as much as possible, to not invite women to the leadership table, and to establish twenty more rules of how we can't be in the same elevator or anywhere near one another, so that no one will have the opportunity to sin. I believe any overcorrection along those lines would be a huge mistake."

Evangelical leaders have thought and written about sexual sin for a long time, but the stories of this past year have brought discussions forward. Politics, theology, and gender relations in church communities will all be affected.