Accessibility links
Review: Biopics About RBG and Dick Cheney Flatter And Demonize, Respectively What's your preference: hagiography or demonization? A biopic about Ruth Bader Ginsburg is blandly positive, while another about Dick Cheney offers an extended, if entertaining, screed. 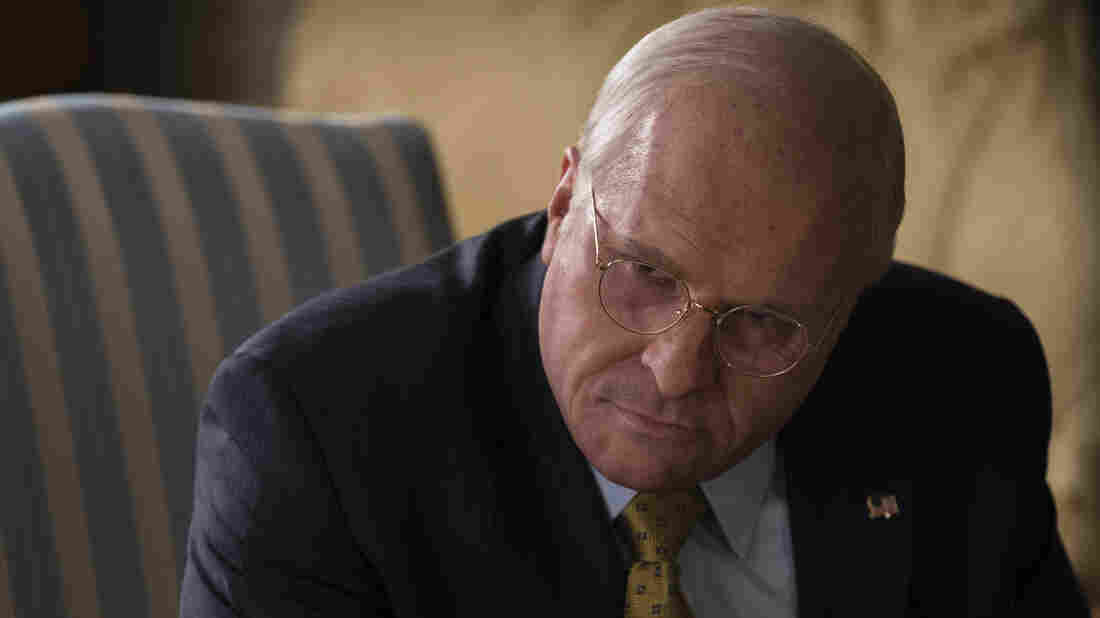 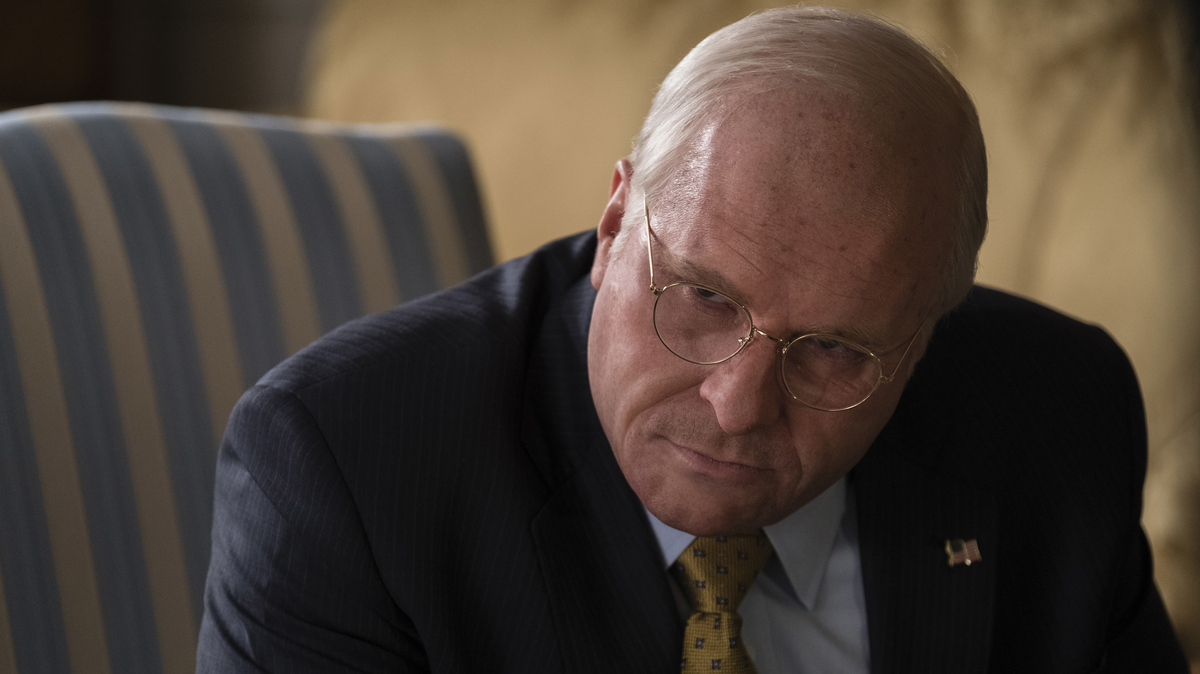 Not throwing away his shot(gun): Christian Bale's Dick Cheney smirks and glowers in Vice.

Two films open this week with titles that make them sound a lot sexier than they are: On the Basis of Sex and Vice.

They're both biopics — Sex about a liberal Supreme Court justice, Vice a conservative vice president. But they differ in ways that go far deeper than politics.

On The Basis Of Sex 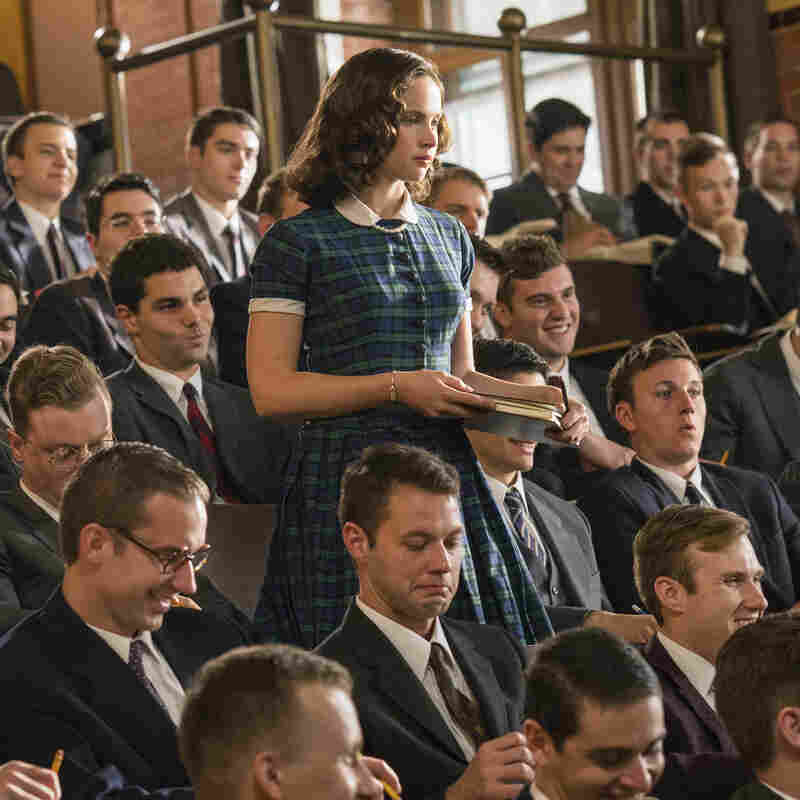 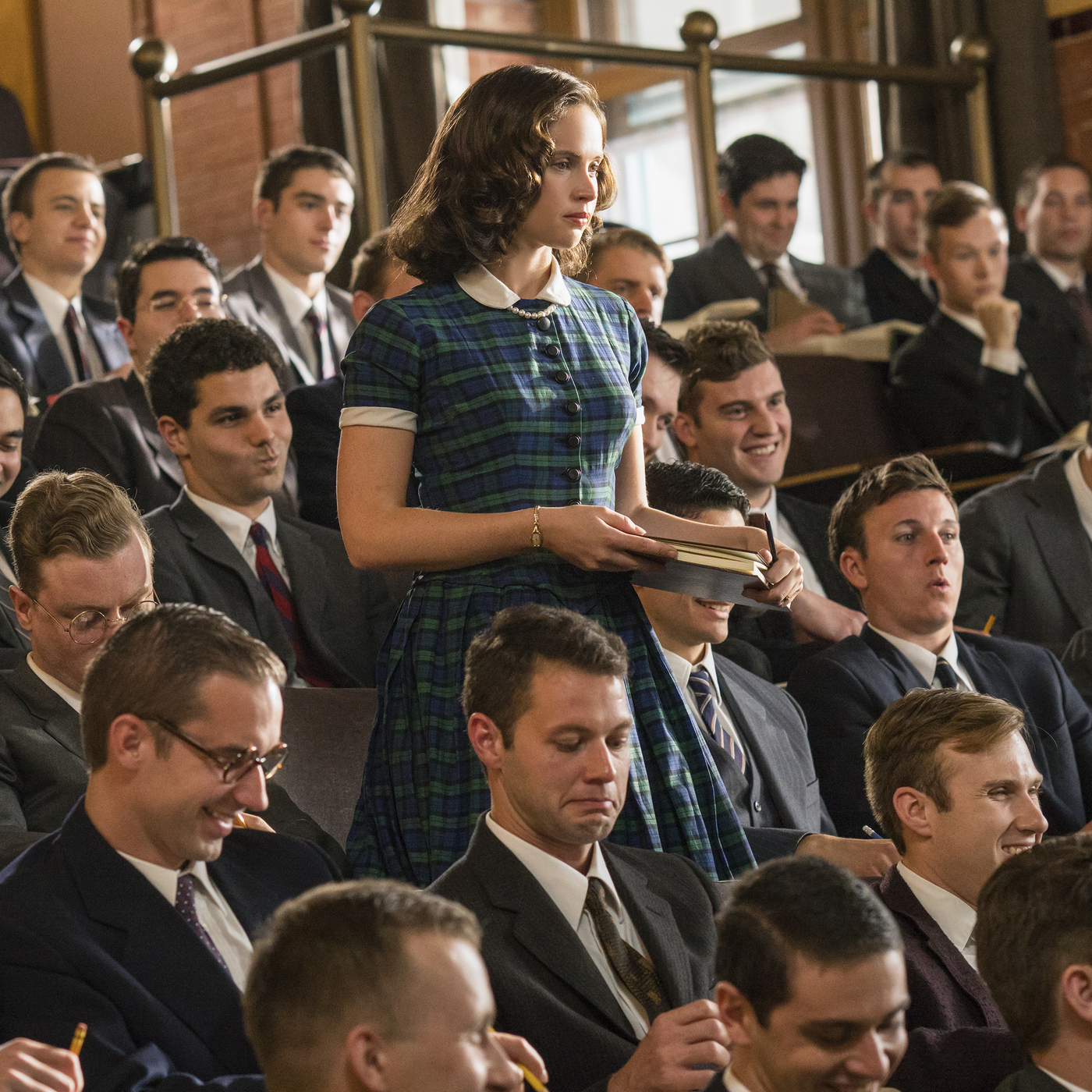 Notorious: A young Ruth Bader Ginsburg (Felicity Jones) stands and delivers at Harvard Law School in On the Basis of Sex.

You know exactly what you're getting from the opening moment, when a very young Ruth Bader Ginsburg (Felicity Jones) strides into Harvard Law School surrounded by a sea of grey, black, and navy business suits.

The year is 1956, and at first, she's the only person you see in heels (that's cinematic shorthand; times were different then). When the law dean hosts a dinner party for the nine Harvard women in a class of hundreds, and asks them to go around the table and explain why they're occupying a place at Harvard that could have gone to a man, you're encouraged to bristle, just as Ruth does.

After Ruth graduates, things aren't much better. New York law firms won't hire her; she ends up teaching law. And then her husband Martin (Armie Hammer) comes to her with a tax case he's working on that he thinks might be up her alley, one that involves sex-based discrimination against a man -- which if ruled unconstitutional, she realizes, could "topple the whole damn system of discrimination."

Director Mimi Leder's approach to the story of a genuinely remarkable woman is genuinely, remarkably ... conventional. There are hurdles jumped, doubts overcome, inspirational music, an earnest performance by Jones, and a climactic courtroom scene that On the Basis of Sex treats almost as a sporting event: Can she get her argument across the finish line?

On the basis of cinematic precedent, that is never very much in question.

You'd think a film about Vice President Dick Cheney would be equally unsurprising; it's not like we don't know how his story turned out. But Vice is by Adam McKay, the guy who made credit default swaps cool, or at least comprehensible, in The Big Short, and cut his teeth on Saturday Night Live. And he doesn't generally give audiences what they're expecting. Take the moment when a young intensely devoted Dick Cheney (played by Christian Bale, who gained 40 pounds for the role) is interning for a young-ish Congressman Donald Rumsfeld (Steve Carell) and asks his mentor a question what it is, exactly, that they believe ...

... which reduces Rumsfeld to a fit of mocking laughter.

That scene takes place early on, and Bale's Cheney is nothing if not a quick study — a downright Machiavellian one, with a wife, Lynne Cheney (Amy Adams) who's as hungry for power as he is.

At least that's how they're pictured by narrator (Jesse Plemons) who pops in occasionally to muse about, say, the impossibility of knowing exactly what the Cheneys were thinking when they realized George W. Bush was going to offer him the vice presidency:

"We can't just snap into a Shakespearean soliloquy that dramatizes every feeling and motivation," he says. "That's just not the way the world works."

Maybe not, but it is exactly how an Adam McKay movie works — the next thing we know, Dick and Lynne are enacting a scene in faux-Shakespeare, complete with peals of thunder.

Growling, gruff, and grumpy Bale makes the title character a lot like his Batman — basically a psychopath-turned-vigilante. Adams is sharp as his Lady Macbeth and Sam Rockwell makes a great foil as Dubya.

McKay views Cheney as responsible for most of the things that are wrong with the world today — and he pursues that notion with take-no-prisoners zeal. And also with considerable cleverness, from the fishing lures that take on the shape of Twin Towers or oil derricks in the final credits, to the waiter who offers Cheney and other diners a "menu" of governmental horrors:

"Tonight," he says, "we're offering the Enemy Combatant, whereby a person is not a prisoner of war, or a criminal, which means of course that he has absolutely no protection under the law."

Vice is as entertainingly negative about the former vice president as On the Basis of Sex is blandly positive about the future Supreme Court Justice.

So, it's Christmas ... choose your poison.

An earlier Web version of this review stated that the fictional Dick and Lynne Cheney re-enact a scene from Macbeth. In fact, they enact a faux-Shakespeare scene.