Accessibility links
2018 Brought A 'Tectonic Shift' In The Gun Control Movement, Advocates Say More than half the states passed dozens of gun control measures in 2018, including what are known as "red flag" laws, according to the Giffords Law Center to Prevent Gun Violence. 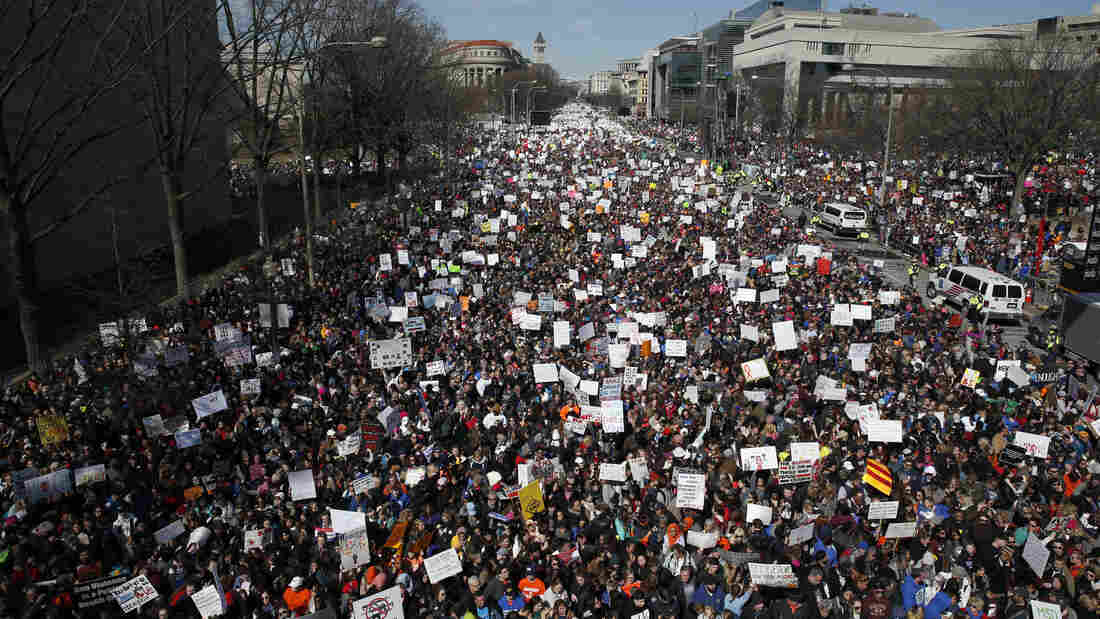 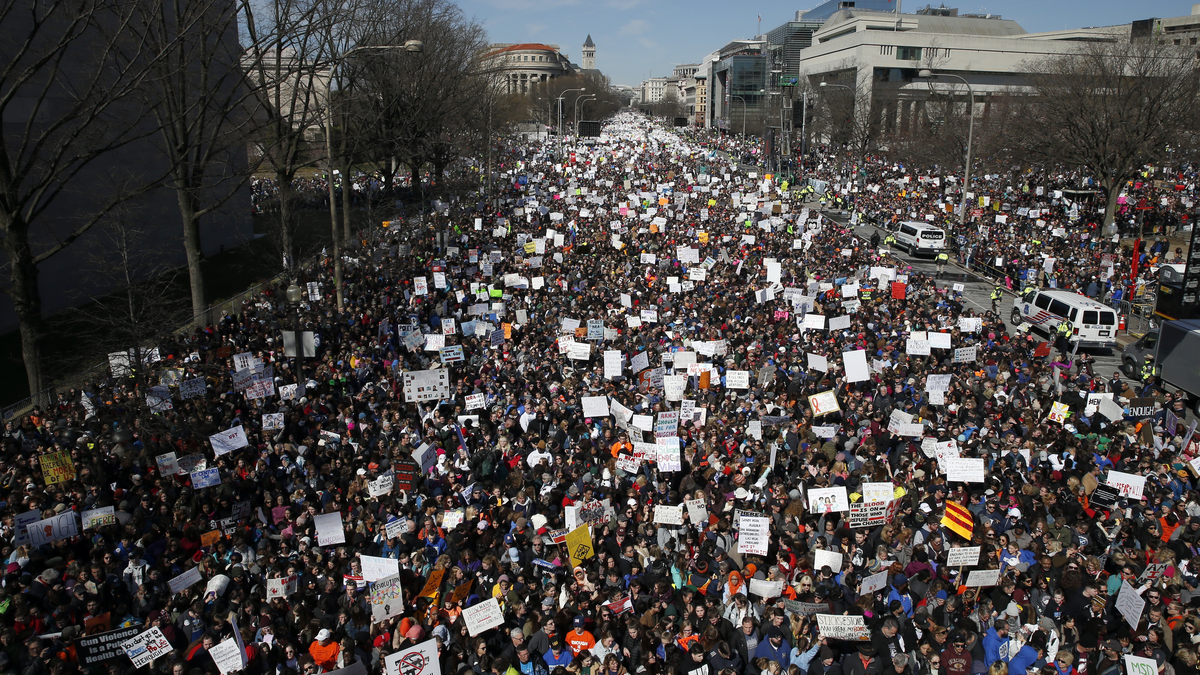 Student activists from Parkland, Fla., quickly mobilized after the shooting at Marjory Stoneman Douglas High School, becoming a vocal force calling for tighter gun laws. That movement led to mass "March for Our Lives" demonstrations around the country in March.

Gun control advocates view 2018 as a turning point in their campaign to strengthen the country's gun laws.

They cite widespread success in passing laws through state legislatures. They're also buoyed by Democratic victories in the midterm elections, which flipped control of the House of Representatives. Another benchmark: In this election cycle, gun control groups outspent gun rights groups for the first time ever.

The advocates' optimism comes after a series of devastating mass shootings in 2018:

Oct. 27: Eleven worshippers killed at the Tree of Life synagogue in Pittsburgh

Nov. 7: Twelve killed, plus the shooter, at the Borderline Bar and Grill in Thousand Oaks, Calif.

Within weeks of the Parkland massacre, Florida's Republican governor, Rick Scott — who previously had an A+ rating from the NRA — broke with the group and signed a broad package of new gun restrictions. 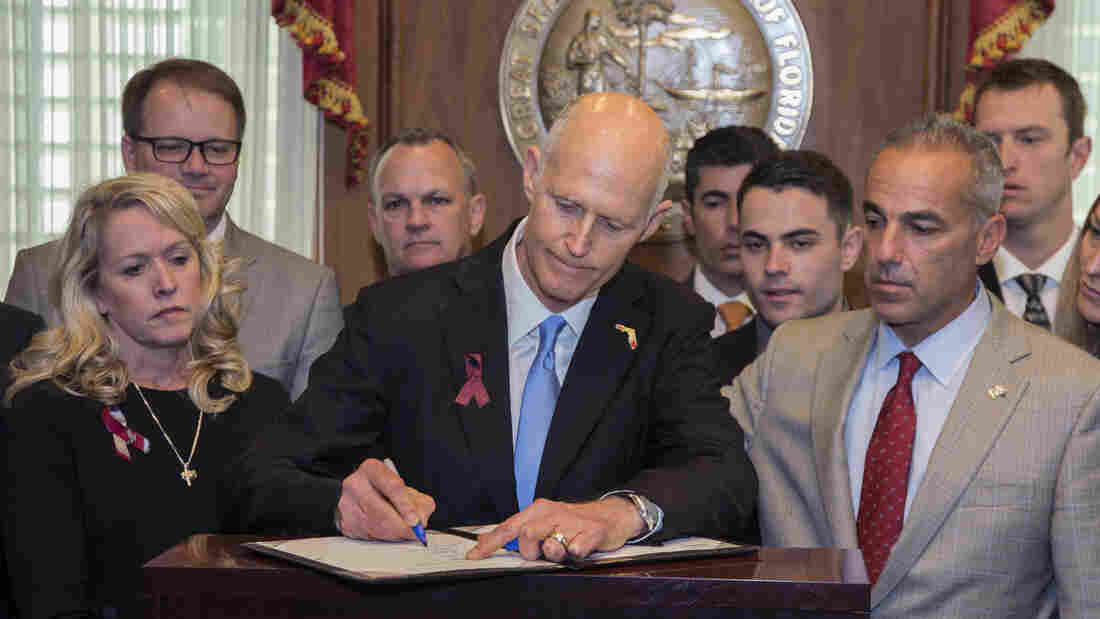 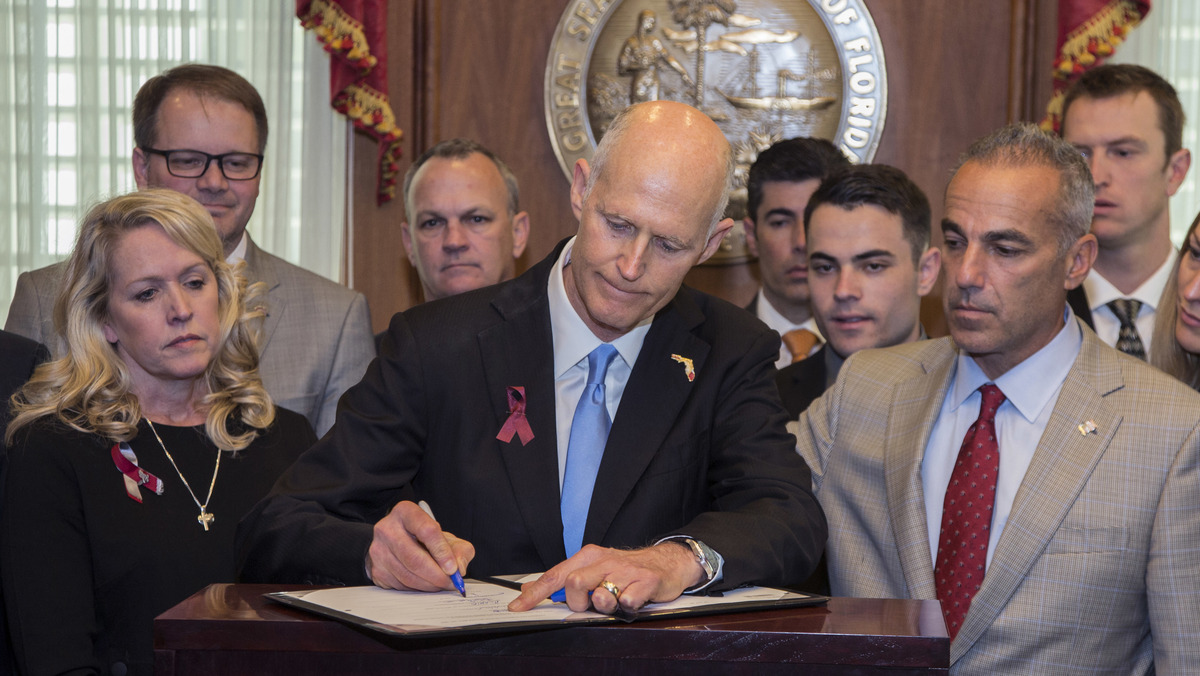 The scope of Florida's legislation was especially notable, coming as it did in a state that has earned the nickname "The Gunshine State" for its permissive gun laws.

Soon after that, Phil Scott, the Republican governor of Vermont — another gun-friendly state — signed the most extensive gun control measures that state has seen.

According to the Giffords Center, this year marks a "tectonic shift" for gun control legislation in the states. By its count, more than half the states passed dozens of gun control measures. That includes eight states, plus the District of Columbia, that passed extreme risk protection orders, known as "red flag" laws.

Contrast that with 2013, after the elementary school shooting in Newtown, Conn., when states passed more laws loosening gun restrictions, rather than tightening them.

Study: Kids More Likely To Die From Cars And Guns In U.S. Than Elsewhere

In state legislatures this year, Anderman says, "the bipartisan effort was significant, and not something that we have really seen in previous years."

She credits much of that momentum to the student activists from Parkland who quickly mobilized after the shooting and became a vocal force calling for tighter gun laws — a movement that led to "March for Our Lives" demonstrations around the country. "They have brought such a level of passion," Anderman says, "and a new voice, a voice from a younger generation that is saying, 'Look at what you have done to us, America. You have put us in harm's way. And we are not going to stay silent.'"

In the midterm elections, Democratic congressional candidates were galvanized to campaign on a gun control message, with winning results. "Of all of the races that we worked on at the federal level, we won 90 percent of them," says Kris Brown, president of the Brady Campaign and Center to Prevent Gun Violence.

In their Washington, D.C., offices, we walk past a board with bumper stickers reading "ENOUGH GUN VIOLENCE" plastered over the names of defeated Republican congressmen. It's a long list.

"In the House of Representatives," Brown says, "what we gained were about 40 seats where we defeated candidates who vote 100 percent of the time, every time, with the NRA."

Now, with a Democratic majority poised to take control of the House, Brown says, "We have individuals elected who are committed to changing this issue, and many of whom feel that they've been elected with a mandate to make this a top priority. That is a sea change. And it's the beginning of something. It's not the end."

In the final days of 2018, the Trump administration announced a ban on bump stocks — the devices that make semiautomatic rifles fire much faster, to simulate a machine gun's fire.

That ban was expected, after the October 2017 shooting at a country music festival in Las Vegas. There, the gunman used bump stocks to mow down hundreds of concertgoers, killing 58 people. This past March, President Trump said, "Bump stocks are going to be gone." 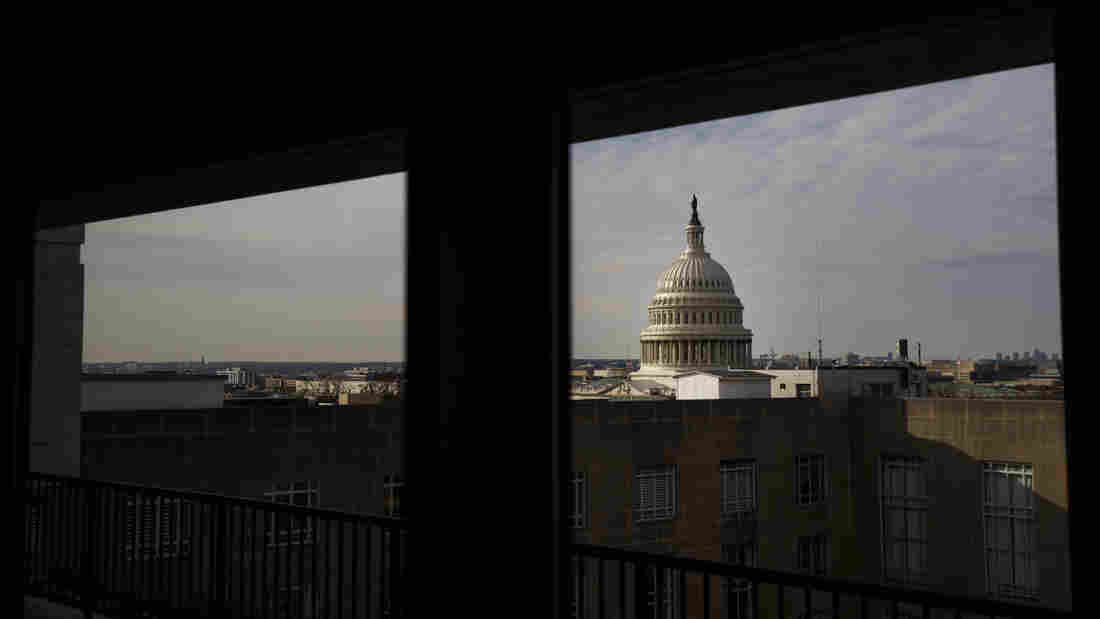 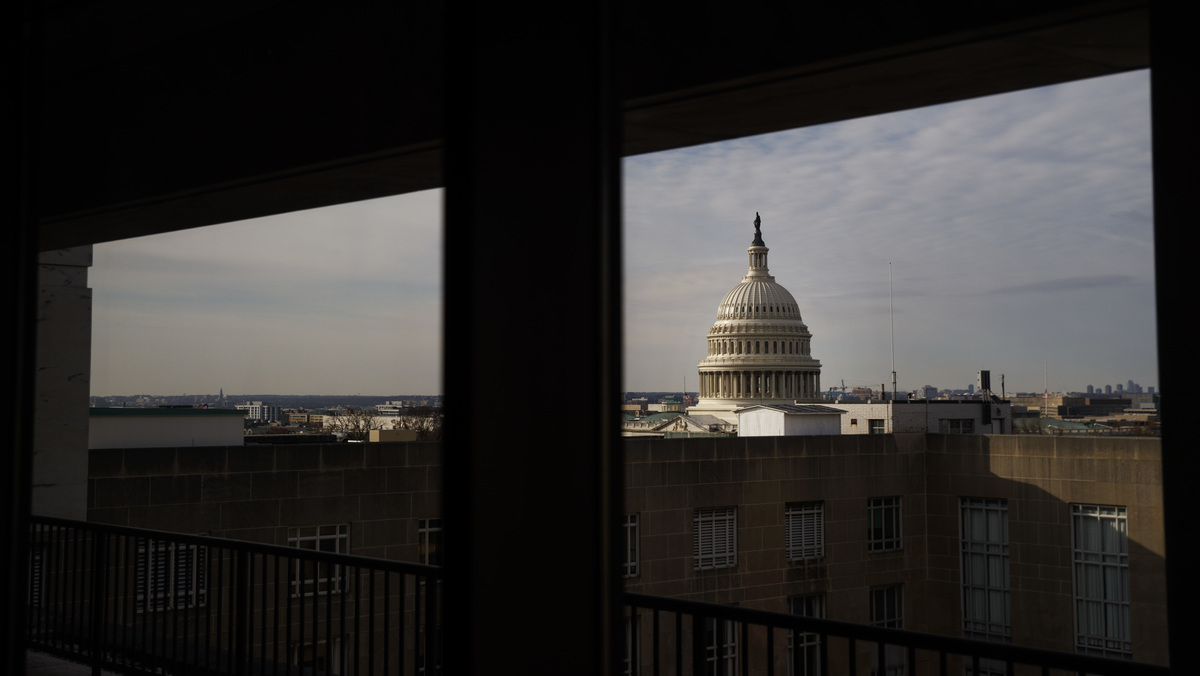 In the midterm elections, Democratic congressional candidates were galvanized to campaign on a gun control message, with winning results.

For gun rights groups, 2018 brought some gains at the state level, including laws in four states that expand "stand your ground" and self-defense laws, as well as successful efforts to fend off "red flag" laws in more than a dozen states.

But, says Michael Hammond, legislative counsel for the group Gun Owners of America, "I would be lying if I said I thought it was a victorious year for us."

Hammond's group bills itself as the "only no-compromise gun lobby in Washington," or, as he puts it, "We're the group that keeps the NRA honest." (For example, while the NRA has said it is "disappointed" in the new federal bump stock ban, GOA has vowed to sue.)

Hammond is frustrated that the Republican-controlled Congress failed to pass one of the gun lobby's key goals: concealed carry reciprocity, which would require states to recognize the concealed carry permits from all other states, including states with weaker gun laws.

Now, with Democrats in control of the House of Representatives, Hammond believes the outlook for gun rights groups is worse. "It makes it impossible, I think, to pass pro-active legislation," he says.

In fact, Nancy Pelosi, the House speaker-designate, has pledged to make passing universal background checks a priority early in the new Congress.

More gun control measures are likely to follow in the House, and lobbyist Lawrence Keane will be among those working to defeat them.

Keane is senior vice president and general counsel with the National Shooting Sports Foundation, which represents the gun industry.

"I would expect to see an age-restriction bill," Keane says. "I expect we'll see an attempt to ban modern sporting rifles again. But what can get out of the House and what can pass the Senate are two different animals."As Keane sees it, "that's a much steeper climb, given that the Senate became more pro-gun after the midterms," with Republicans increasing their majority by two seats.

Looking forward, Keane and other gun rights activists are heartened by one long-lasting effect of 2018: a strengthened conservative majority on the U.S. Supreme Court.

With this year's confirmation of Brett Kavanaugh, Keane concludes, "The Second Amendment is in a safer place."