Accessibility links
Girl Still Believes In Santa, Even After Trump Casts Doubt On His Existence The president caused a stir when he asked a 7-year-old caller to the Santa tracker hotline whether she still believed in Saint Nick. 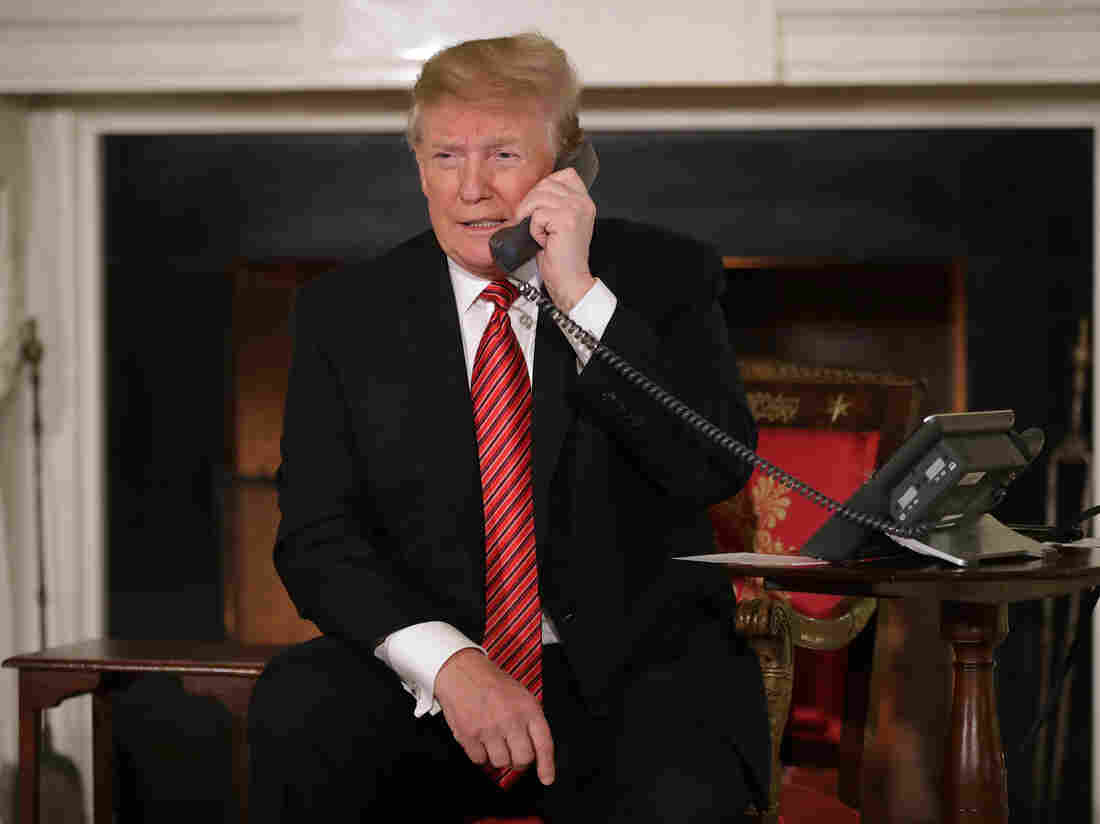 President Trump takes phone calls from children as he participates in NORAD's Santa tracker on Christmas Eve at the White House. He caused a stir by asking a 7-year-old caller if she still believed in Santa Claus. Chip Somodevilla/Getty Images hide caption President Trump takes phone calls from children as he participates in NORAD's Santa tracker on Christmas Eve at the White House. He caused a stir by asking a 7-year-old caller if she still believed in Santa Claus.

Ho ho ho, merry Christmas! What would you like this year, little girl? How about the president of the United States casting doubt on a story that American culture has worked tirelessly to make you believe, using a term you don't understand?

That's what happened on Christmas Eve.

As we reported Tuesday, President Trump and first lady Melania Trump were taking calls from youngsters wondering about Santa's whereabouts, as part of the NORAD Santa tracker — a long-running program whose mission is, essentially, to enlist the military in sustaining children's belief in Old Saint Nick, at least for one more night.

For kids calling the hotline, getting patched through to the White House is a rare treat — and 7-year-old Collman Lloyd of Lexington, S.C., was suddenly talking with the president.

The president's side of that conversation is already famous. Now, with a video posted by the Charleston Post and Courier, we get to see the other half of that exchange.

Chatting in her family's kitchen, Collman tells Trump the cozy preparations underway at the Lloyd household: "Probably put out some cookies and then we're hanging out with our friends, so that's pretty much all."

"Are you still a believer in Santa?" Trump asks.

Collman pauses a moment, and looks up at whoever is shooting the video.

"Because at 7 it's marginal, right?" Trump asks.

She says "yes, sir," once more — and then an adult in kitchen quickly tries to change the subject, imploring the other kids in the room to say hi to Mr. President.

Later, Collman told the Post and Courier that she had never heard the word "marginal" before.

But how marginal is it, to believe in Santa Claus at age 7?

Some studies on Santa Claus belief (like this one) ask adults at what age they stopped believing. As we've reported, adults say they believed up until nearly age 9.

But if you ask the kids themselves, it turns out age 7 is a crucial age for children in deciding what exactly the deal is with Santa. One survey of kids found that 83 percent of 5-year-olds believe in him. But researchers have found that that many children give up their belief in Santa at age 6 1/2 or 7, "following a period of gradually increasing doubts about various aspects of 'the Santa Claus myth', for example that his sleigh is pulled by flying reindeer." By age 9, just a third of kids still believe.

Where do kids get their belief in Santa? From adults, who populate malls and parades with live Santas at Christmastime. A 2016 study found that the more live Santas children are exposed to, the more they believe a live Santa is really the big guy. And it found that parents are highly involved in the charade: The more parents promote Santa, the less likely children are to question whether Santa is real.

It's not really news, then, that a 7-year-old believes in Santa. But it is news that someone answering the phone at the Santa hotline would suggest anything else.