Accessibility links
2018 Was A Year Of Drastic Cuts To U.S. Refugee Admissions America is rejecting more legal immigrants than ever before. Refugee advocates warn that President Trump's aim is to dismantle the U.S. refugee resettlement program. 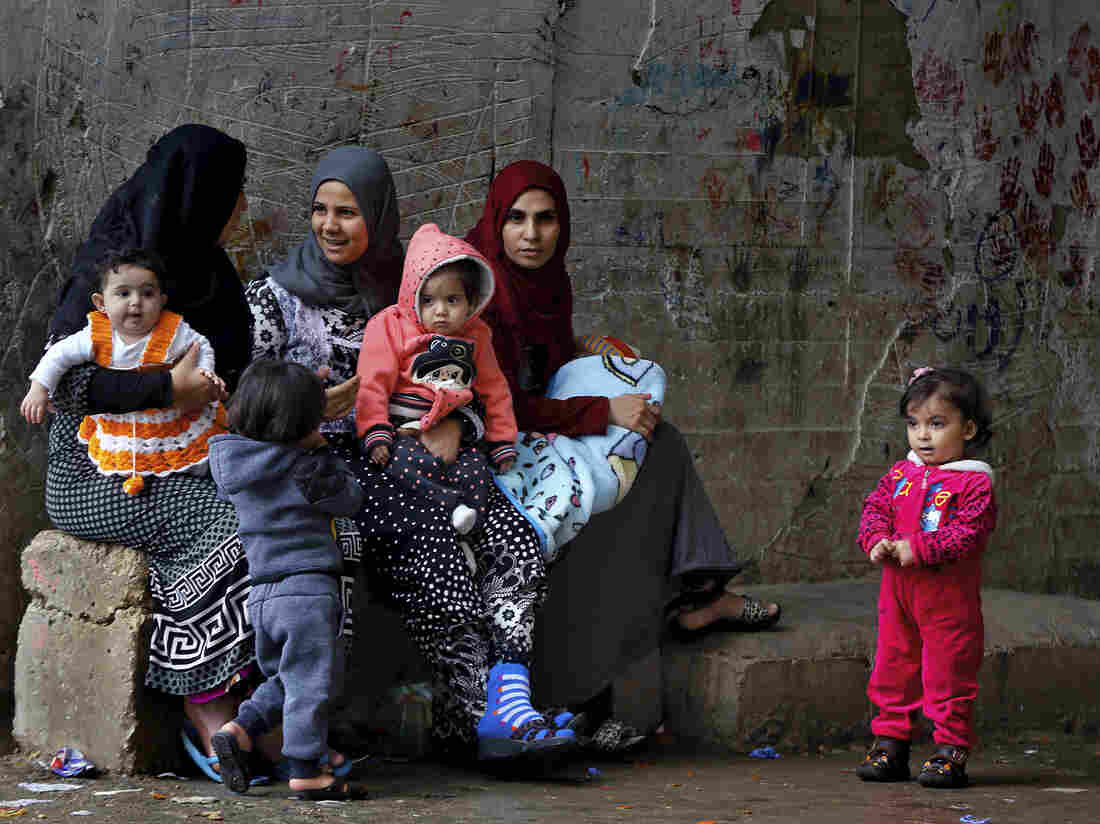 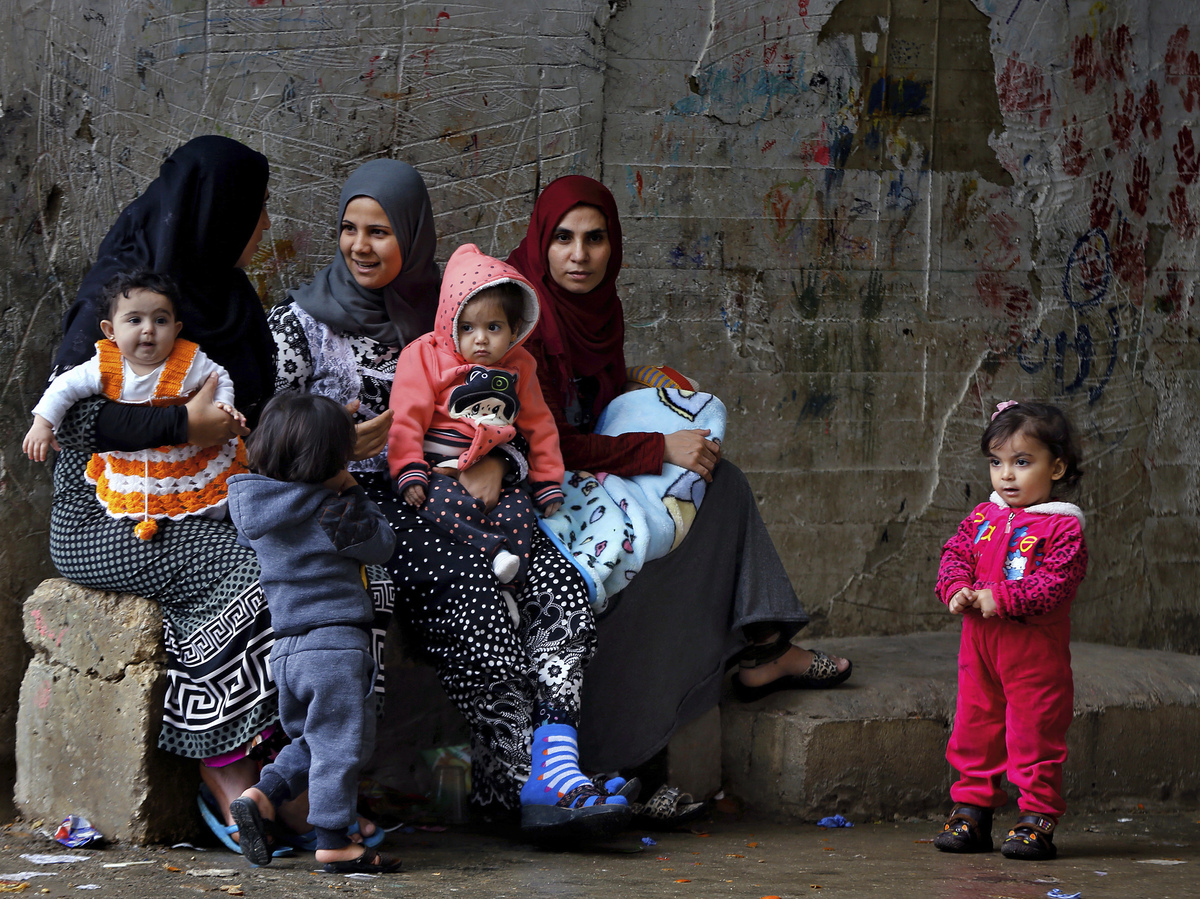 Syrian refugee women hold their children in a refugee compound in the southern port city of Sidon, Lebanon.

The first casualty in 2018 was the U.S. refugee resettlement program, says Larry Yungk, a former official at the U.N. refugee agency and now co-chair of the advisory committee of Church World Service's refugee program.

"This is one where the knobs were in reach," he explains, referring to the president's prerogative to set the yearly refugee admission cap. After framing refugees as a security threat, Trump slashed resettlement admission numbers for a second year to a historic low, says Yungk. Just 22,491 refugees were resettled in the U.S. in fiscal year 2018, roughly half the 45,000 cap.

"He has managed to convince people that somehow, out of the 75 million persons who enter the U.S. each year who are not American citizens, refugees are the ones we should worry about the most," he says.

Now, the refugees approved for resettlement are mostly from Africa and European countries from the former Soviet Union. More than 2,500 were from Ukraine in fiscal 2018, according to the State Department Bureau of Population, Refugees and Migration.

At the same time, the number of Muslim refugees is down by 90 percent since fiscal year 2017, and Latin American refugee numbers are down by almost 40 percent, even though these asylum seekers are coming from regions that produce some of the highest numbers of refugees due to civil wars and violence. Just 62 Syrian refugees were resettled in the U.S. in the fiscal year that ended Sept. 30.

The cuts have been devastating for resettlement agencies. There are nine voluntary agencies that receive federal funding based on the number of refugees they resettle. Drastic budget cuts and staff layoffs began in 2018 and are expected to continue through 2019.

"This is very much the dismantling of the program's infrastructure in the U.S.," says Jennifer Quigley, an advocacy strategist with Human Rights First in Washington, D.C.

She believes the president's aim is to zero out the refugee resettlement program. "We would not be surprised if we do not have this program at the end of this administration," she says.

Administration officials have offered different reasons for the cuts, including security concerns, protecting American jobs and support of the U.N. refugee agency for work in Lebanon and Turkey.

When Secretary of State Mike Pompeo announced in September that the U.S. would admit no more than 30,000 refugees in fiscal year 2019, he said the lower refugee ceiling would help improve national security.

Still, restricting the refugee program appears part of a larger administration aim to restrict or close paths to legal immigration, advocates say. A variety of programs are targeted and have new restrictions.

The Department of Homeland Security has its highest rate of denial on record for foreign-born U.S. residents applying for work permits, travel documents and applications based on family reunification and petitions for fiancés.

New policies slow or stop the admission of skilled foreign workers and entrepreneurs. The number of international students in the U.S. has declined in the past two years, in part because of visa restrictions.

The U.S. military has also abruptly discharged some foreign-born recruits who were promised an expedited path to citizenship.

Hundreds of thousands of longtime U.S. residents have lost temporary protected status and are now subject to deportation. The TPS program, established by Congress in 1990, was created to offer protections to foreign nationals of countries devastated by natural disasters or armed conflict. It allows them to get work permits, pay taxes and establish new lives in the U.S.

Even as the Trump administration's hard-line immigration policies have triggered a crisis on the southern border, another less-known crisis is brewing along the northern U.S. border with Canada.

Fearing Trump's crackdown, thousands have entered Canada at unmarked locations along the border this year.

The largest group is Haitians, fearing deportation with the cancellation of TPS protection, followed by Nigerians, Turks, Syrians and Eritreans.

In an interview last week, Trudeau cited "domestic realities within the political context in the United States" for driving people to flee across the Canadian border. The stream of asylum seekers has become a political wedge issue for Trudeau, who is up for re-election in the fall of 2019.

Polls show a majority of Canadians believe there is a migration crisis as opposition politicians hammer Trudeau for failing to control the border and disregarding public safety.

"You have political leaders on the right whipping up hysteria. The genie is out of the bottle in terms of political rhetoric, and I don't think we are going to be able to put it back," says Craig Damian Smith, associate director of the Global Migration Lab at the University of Toronto. "I think the danger is in the public discourse and eventually the violence towards asylum seekers and growing xenophobia. It's scary, especially when Canada is supposed to be this beacon of liberalism and multiculturalism."