Accessibility links
2018 Was A Milestone Year For Climate Science (If Not Politics) 2018 saw a string of more precise — and dire — assessments that a warming climate is affecting the weather. That didn't keep President Trump and others from questioning those scientific conclusions. 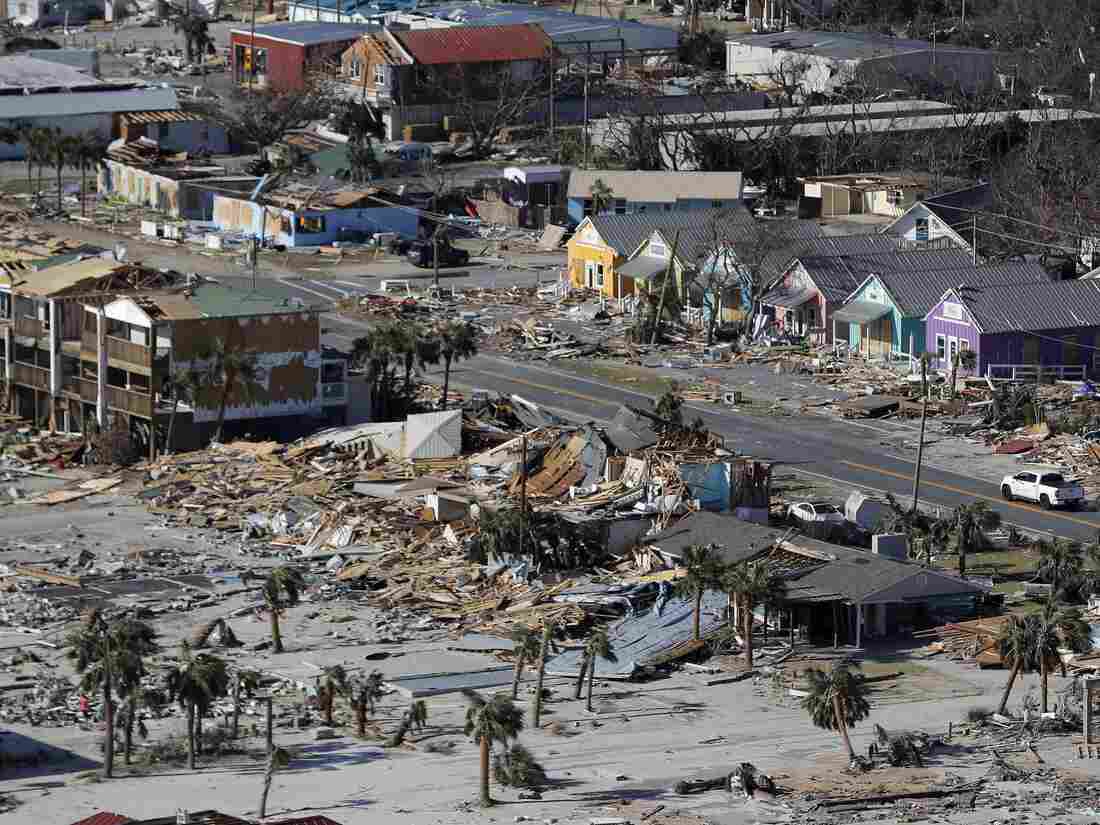 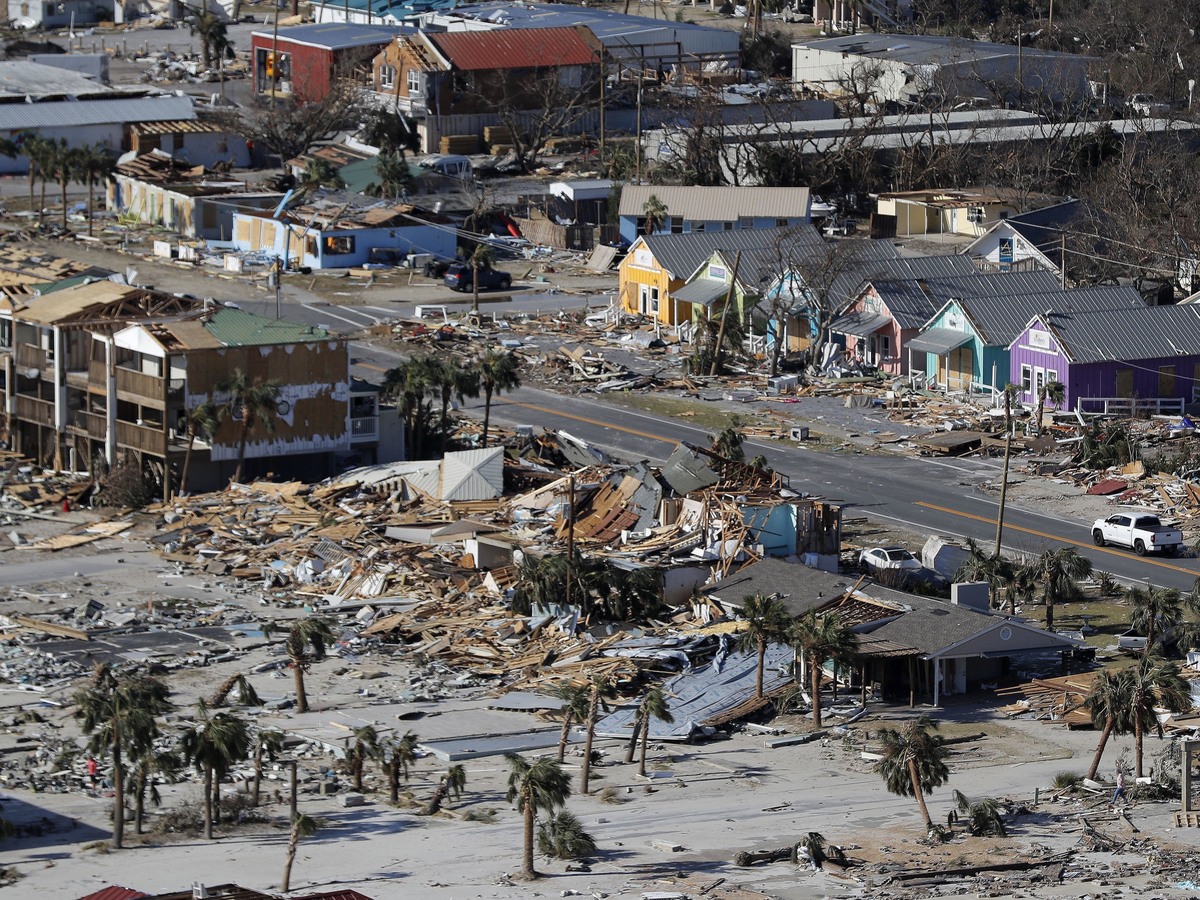 The devastation from Hurricane Michael over Mexico Beach, Fla. A massive federal report released in November warns that climate change is fueling extreme weather disasters like hurricanes and wildfires.

2018 was a hot year — in fact, the fourth warmest on record. The only years that were, on average, warmer were the past three, according to the World Meteorological Organization.

It has been warming for decades now. But 2018 brought several major new and markedly more precise reports from scientists about what climate change is doing to the weather and how dire they expect the consequences to be.

That didn't stop President Trump and others from continuing to question the evidence.

"Is there climate change?" Trump said to reporters from Axios on HBO in November. "Yeah. Will it go back like this?" he added, motioning up and down with his hand. "I mean will it change back? Probably. That's what I think."

Another politician who weighed in on the clear evidence of a warmer planet was Republican Sen. Ted Cruz of Texas, when he was campaigning this past fall.

"Well, listen," he assured a moderator at a televised debate. "Of course the climate is changing. The climate has been changing from the dawn of time. The climate will change as long as we have a planet Earth."

Both statements are at odds with the consensus within the climate science community.

"The climate has never changed this rapidly"

Many in that community met in Washington, D.C., in December at the annual meeting of the American Geophysical Union. "We're not seeing cycles" in which warming is likely to go back down, says climate scientist Martin Hoerling. "We're not seeing things that are going to revert back," as long as greenhouse gases in the atmosphere continue to increase.

What about that idea that the climate has changed from the dawn of time? Climate scientist Stephanie Herring says sure, that's technically true, but it misses an important difference happening now. "The current change that we are experiencing now is particularly alarming," she says, "and that's because in the history of human civilization the climate has never changed this rapidly." For example, 20 of the warmest years on record around the planet occurred in the past 22 years, according to the WMO.

The yawning gap between the views of some politicians and the vast majority of scientists on climate change isn't new. But 2018 was a watershed year in the amount of new evidence for continued warming and its effects.

Hoerling and Herring work for the National Oceanic and Atmospheric Administration, which, along with numerous other federal agencies, issued a national climate assessment this year. It says climate change is real, humans are causing it and it's worse than ever. Moreover, it is happening faster than anticipated and is already affecting weather.

In October, the highly regarded Intergovernmental Panel on Climate Change came to a similar conclusion. If the Earth warms up another half a degree Fahrenheit — which is very likely — the world's weather will change drastically. The report noted that the world's governments probably have about a dozen years to dramatically reduce greenhouse gas emissions to avoid the worst impacts.

But the weather is already changing. There was yet another study this year, issued by the American Meteorological Society, that examined extreme weather events in 2017. It found huge rainstorms around the world that the authors said were made more likely by a warmer climate. Hoerling says it's all about warmer oceans.

"To have more water vapor in the air is simply delivering heavier rains," Hoerling says. "The physics of what's driving heavier rains, even when it's not a hurricane, is virtually the same in many locations" around the world.

The physics isn't complicated; heat water in a pot on your stove and watch as it evaporates and rises. Rising hot air causes storms, and the water comes back down. Just ask people who lived through hurricanes in Houston, Florida or Puerto Rico. The past two years have seen abnormally strong hurricane seasons in the Atlantic.

The extreme weather report is all about "attribution" science — determining whether a big storm or fire or heat wave is statistically "normal" or is an outlier that has been pumped up by a warmer climate.

Hoerling says the science has improved and is revealing more than just bigger, wetter storms. "With seven years of these reports," he says, "we're seeing more and more evidence building that heat waves are not only happening more often, their magnitude is off the charts."

The United Nations in December gathered leaders from nearly 200 nations to a meeting in Poland to find ways to limit greenhouse gases. The upshot of the meeting was that the world's energy economy needs to change fast — faster than people realized until now.

The stronger link between climate and weather is making it harder to question climate science. It also has some people worried that they may be held liable if they ignore it and don't plan for the changes that are happening.

At this year's AGU meeting on extreme weather, attendees heard from prominent attorney Lindene Patton of Earth & Water Law Group, who specializes in risk and liability. Patton told them her clients include licensed professionals who build things.

"You need to go in as a practicing architect, or engineer, and plan for a different environment, especially for long-lived assets," Patton says. "Roads, buildings, homes."

Using ever more precise attribution science can help inform decisions, she says, and help keep professionals from getting sued for failing to build for a warmer and more dangerous world.

Patton says she is also getting more calls about climate liability from another group of worried people: politicians.