Accessibility links
Detroit's Big Comeback: Out Of Bankruptcy, A Rebirth Five years after filing for bankruptcy protection, Detroit has achieved a financial feat few experts predicted. But some worry the growth is leaving long-time Detroit residents behind. 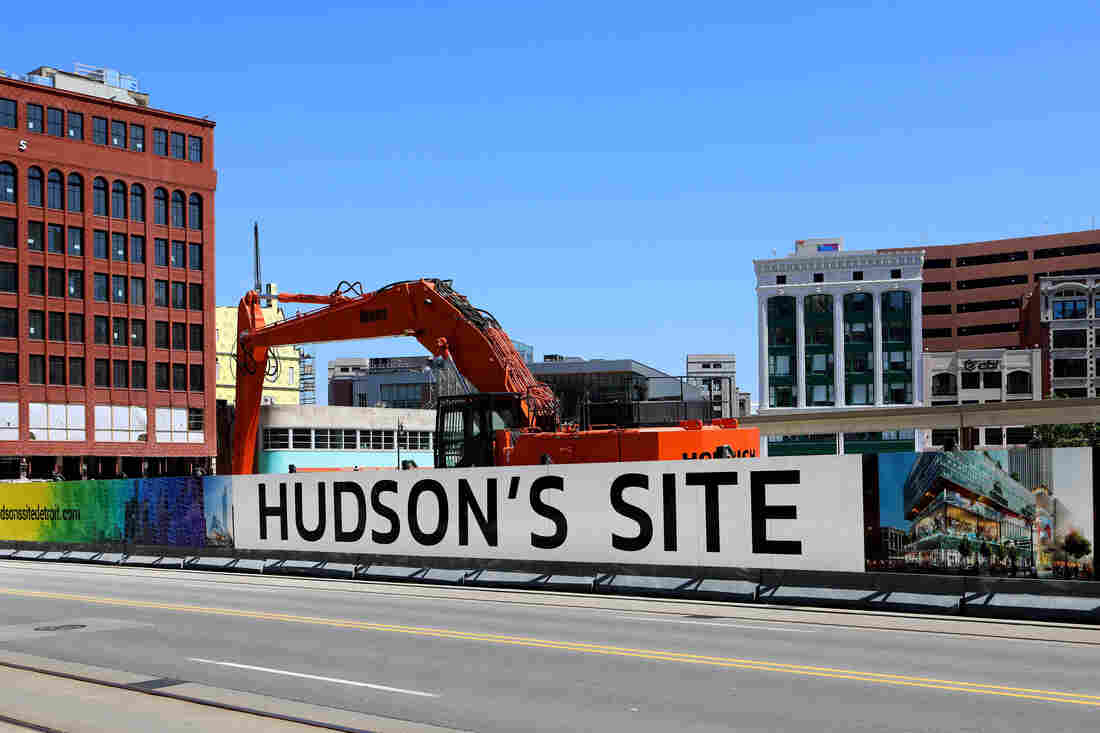 Construction at Hudson's Site, one of Dan Gilbert's projects in downtown in Detroit. Gilbert has invested or allocated an estimated $5.6 billion in about 100 Detroit properties through his Bedrock real estate firm. Raymond Boyd/Getty Images hide caption 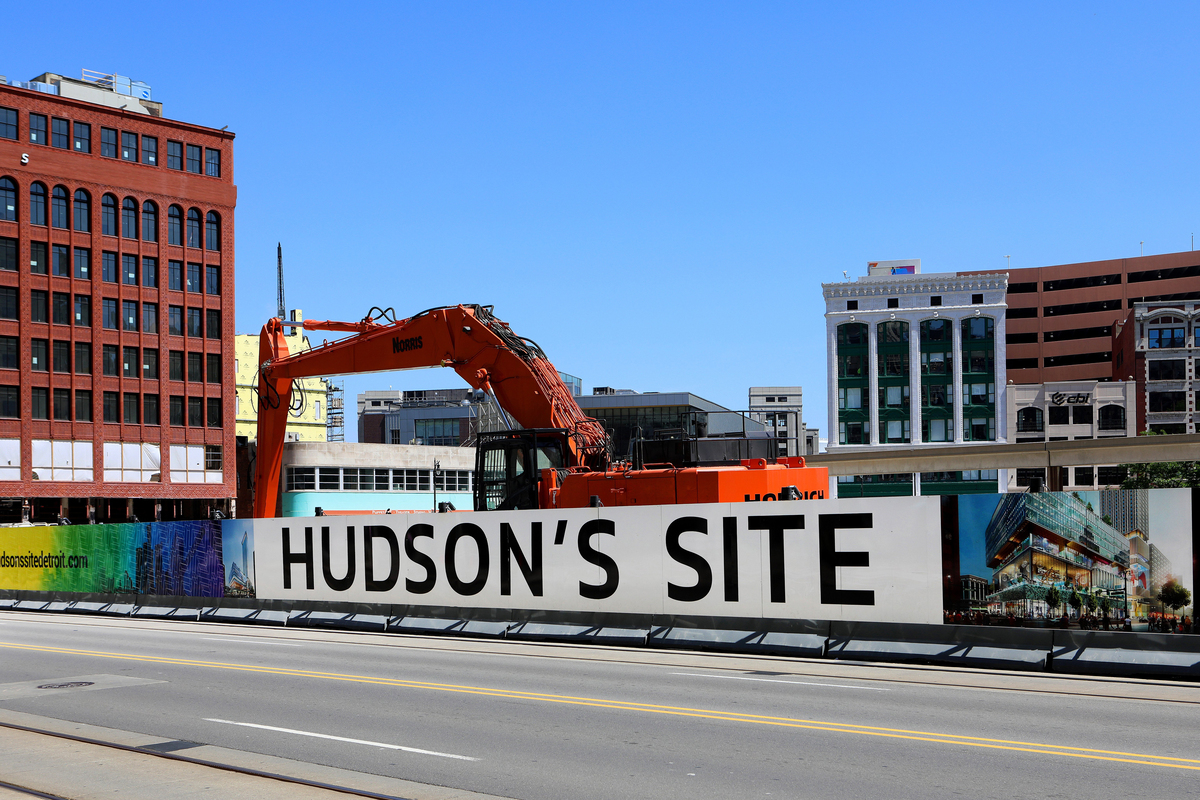 Construction at Hudson's Site, one of Dan Gilbert's projects in downtown in Detroit. Gilbert has invested or allocated an estimated $5.6 billion in about 100 Detroit properties through his Bedrock real estate firm.

The city of Detroit has reached a major milestone.

Five years ago, the Motor City filed for Chapter 9 bankruptcy protection, saddled with more than $18 billion in debt.

Now, Detroit is not only out of bankruptcy, but is also issuing bonds backed by its own credit, instead of bonds guaranteed by the state government or insurers.

It's a financial feat few experts predicted could happen so quickly.

But while the city's economy is still improving, some Detroiters fear it may be leaving behind those who toughed it out when times were bad.

Detroit shed about $7 billion dollars of debt when it exited bankruptcy.

Officials from Detroit and the state of Michigan declared the city once again open for immediate investment.

'Mingus: Jazz In Detroit' Catches A Giant At A Moment Full Of Possibility

The billionaire owner of the NBA's Cleveland Cavaliers has invested or allocated an estimated $5.6 billion in about 100 Detroit properties through his Bedrock real estate firm.

Gilbert also moved his Quicken Loans mortgage company headquarters to Detroit's downtown, bringing with it tens of thousands of workers to the city's central core. He is now reportedly Detroit's largest private employer and taxpayer. 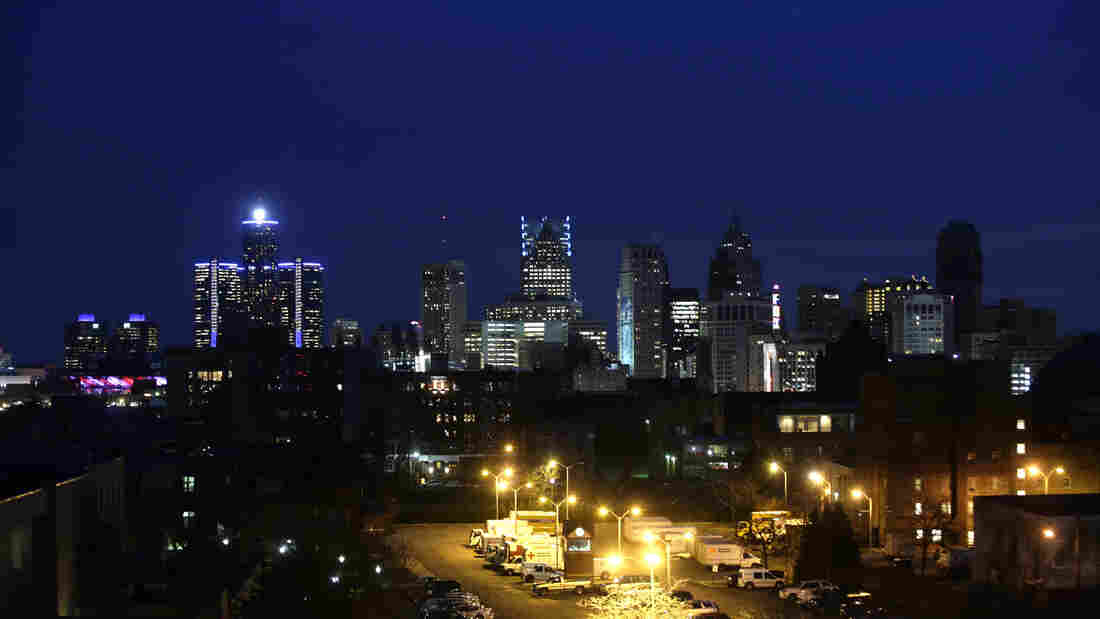 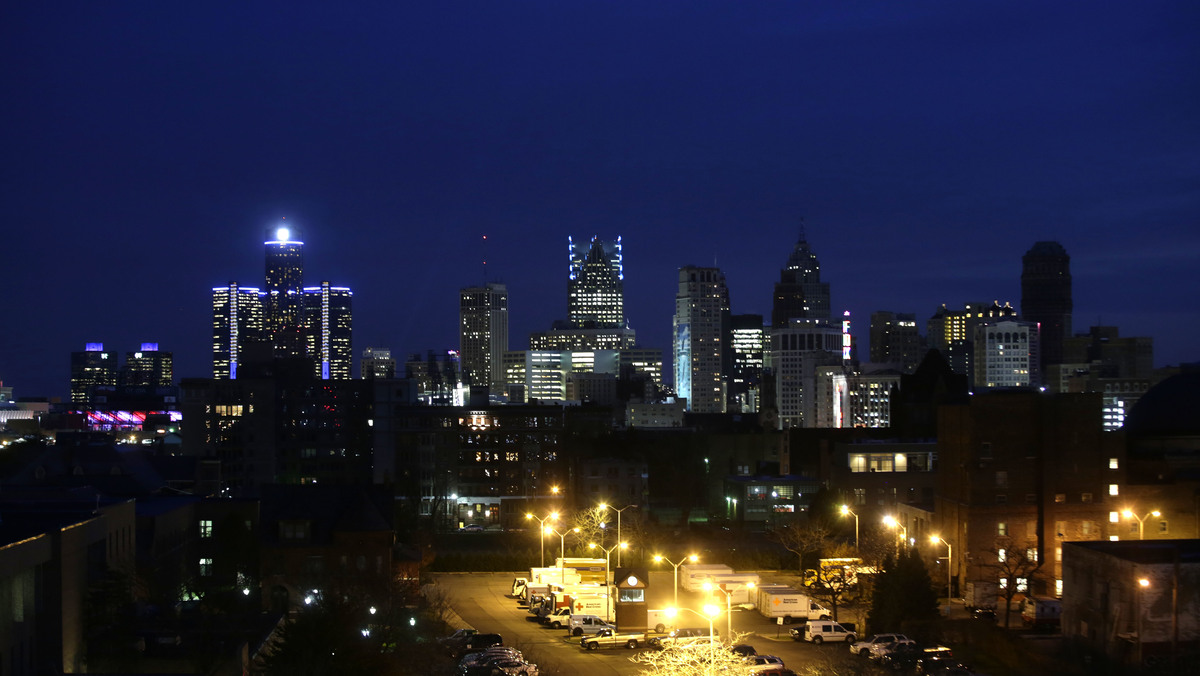 Gilbert is also one of the most visible faces of Detroit's rebirth.

At a recent groundbreaking for the Gilbert-backed Monroe Blocks project, a new downtown office tower and mixed residential-retail development set on a site mostly-vacant for decades, Detroit Mayor Mike Duggan marveled at both the billionaire's efforts and just how fast the once-bankrupt city is changing.

"Isn't this an amazing week in Detroit?" Duggan gushed. "We started Monday with an historic commitment by the corporations to help transform the neighborhoods. And three days later, on Thursday, we're here with Dan Gilbert and Bedrock and an announcement that's going to help transform the skyline of the city."

Isn't this an amazing week in Detroit?

That corporate funding for Detroit's neighborhoods is key.

Gilbert and many others say the single biggest roadblock in Detroit's path forward is pushing progress beyond the city's central business district.

A fear of neglect

The lack of development in the long-moribund neighborhoods is one reason some experts still see Detroit as bit of an iffy financial proposition, even though officials have made significant inroads into repairing the money-management problems that led it into bankruptcy.

Moody's Investors Service analyst David Levett notes the city's government is consistently balancing its budget now, while saving funds to cover pension obligations Detroit will have to resume paying in 2024.

He also estimates that impending job cuts in Detroit's signature auto industry really won't hit much of the workforce in the city itself.

And he worries that investors are not spreading their wealth across all of Detroit.

Some critics complain that investment seems skewed towards bringing new upscale residents downtown, neglecting the neighborhoods where most Detroiters live.

Yet even though residents are still leaving the city, the exodus has slowed to a mere trickle of what it's been over the past few decades.

In some neighborhoods, people are actually moving in.

It's the weekend before Christmas Day, and shoppers are examining the paintings, earrings and other hand-made items lining the shelves of the Art in Motion studio and gallery. 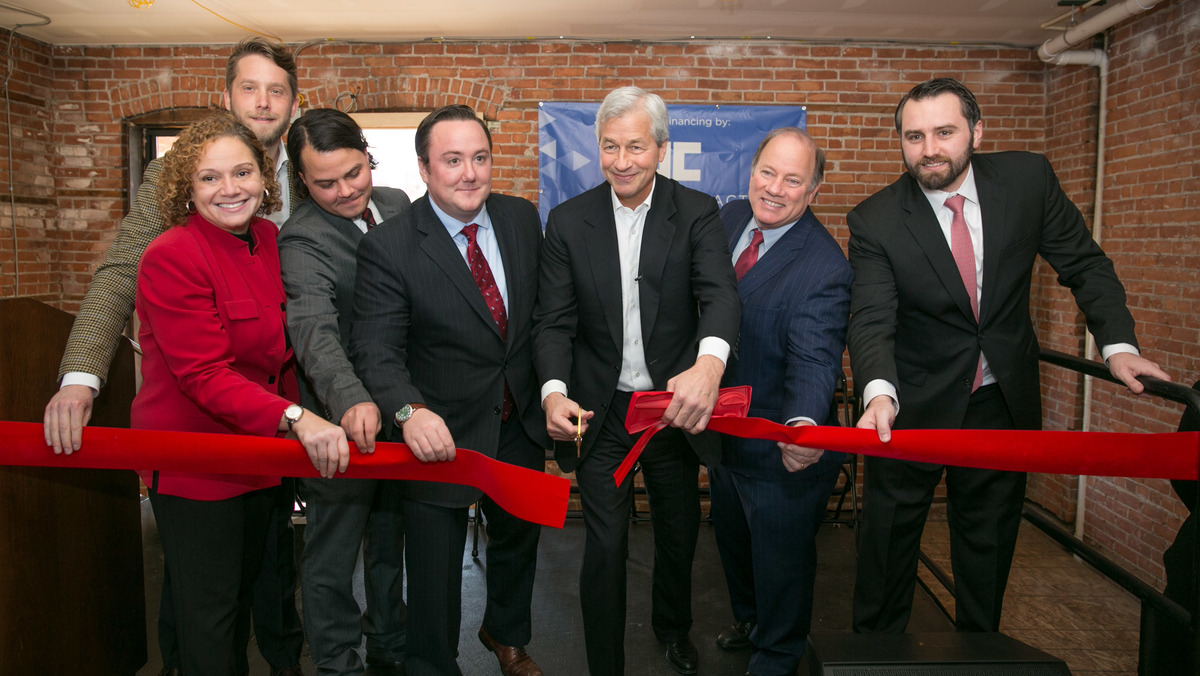 The shop sits in one of Detroit's most-stable neighborhoods, along what's called the Avenue of Fashion.

It was once a prime shopping area until the advent of malls and fears over racial unrest caused some Detroiters to flee to the suburbs.

Willingham is one of those who stayed in this neighborhood. She says she's called it home for almost 50 years.

Willingham says, like in any big city, there are some issues with crime here.

But she adds that in the past few years there has also been a renewed vibrancy.

Detroit officials are targeting hundreds of millions of dollars to build up neighborhoods already doing well, like those near the Avenue of Fashion.

Willingham says that can be a mixed blessing.

"Now we're getting ready to go into construction next year, which is a good thing. They're getting ready to take the median out, they're expanding the sidewalks, putting in bike lanes. But that's going to be a two-year process. So for a small business that's a lot to endure to keep business going," Willingham said.

It's a problem residents in other neighborhoods stretching across Detroit's 143 square miles say they are longing to face.

There was soft rain falling on heavy traffic during a recent evening along Jefferson Avenue, which connects a mostly-barren edge of Detroit with the affluent Grosse Pointe suburbs.

Detroit officials have plans to lure new business to the area by providing tax breaks, assembling parcels of land and even offering to match investors' money with grant funding.

But those plans are likely years away from becoming reality.

And for Detroit community activist Luther Keith, this area seems worlds away from the thriving progress downtown.

Keith gestures through the raindrops at what he says are too many stores still sitting empty.

Keith leads a non-profit called Arise Detroit, designed to bring neighborhood leaders together with agencies and programs in hopes of improving individual communities.

He notes that city officials recently announced they will renovate two vacant buildings in this Jefferson Chalmers area to create new residential units, half of them affordable housing for people with low-incomes.

The Detroit City Council has mandated that developers receiving a certain percentage of taxpayer funding for projects, or a discount on land purchased from the city, must ensure at least 20 percent of the units they build are affordable housing.

But he says he still hears from many Detroiters barely making ends meet who fear the city is clearing land and tearing down tens of thousands of blighted buildings to make way for new, more upscale residents

Those Detroiters, Keith says, wonder if people currently living in the city's desolate neighborhoods are being forgotten.

Or worse, simply being swept aside.

Yet Keith believes the enduring challenge to transforming Detroit is much more basic.

"The real issue in Detroit is not gentrification, its poverty. Poor people. We need jobs, we need investment, so folks can take care of themselves," Keith said.

Although Detroit's poverty rate has dropped slightly in recent years, it's still the poorest big city in the nation.

Almost half of Detroit children live below the poverty line.

City officials say there are employers clamoring for new hires, just not on the auto assembly lines of old.

Many business and government leaders, especially Detroit Mayor Mike Duggan, are pushing workers to seek training in skilled trades, everything from construction work to database administration.

Yet some city residents say monetary pressures are forcing them to make do with what is already at hand.

We're strong. We're resilient. When we fall we get back up.

Detroiter Thomas Sampson says he moved back to the city to help family care for his daughter.

Sampson says that means he has to put food on their table now, with no way to take time off for new training.

So he supports himself by driving for the ride share service Lyft.

But Sampson estimates he and others like him might actually be earning more money now than when they worked traditional jobs.

It's a case, Sampson says, of making Detroit's post-bankruptcy economy work for them, even if they're not the kind of new property owners the city wants to fill its tax base.

"Because we have the decisions that was made and now we got all these folks that's coming down here, it enables me to do well in the ride share program," Sampson said. "And that's what's the most important thing about Detroiters. We're strong. We're resilient. When we fall we get back up."

That's a mantra Detroit officials have, in essence, adopted as well, touting the resurgence of a Motor City moving past bankruptcy far faster than experts anticipated, but with many miles to go on the road to resurrection.