Accessibility links
What 3 Deaths Among Thousands Tell Us About Afghanistan In 2018 Thousands of civilians, soldiers and police were killed this year in suicide attacks, bombings and airstrikes. The lives and deaths of three Afghan men shed light on the challenges the country faces. 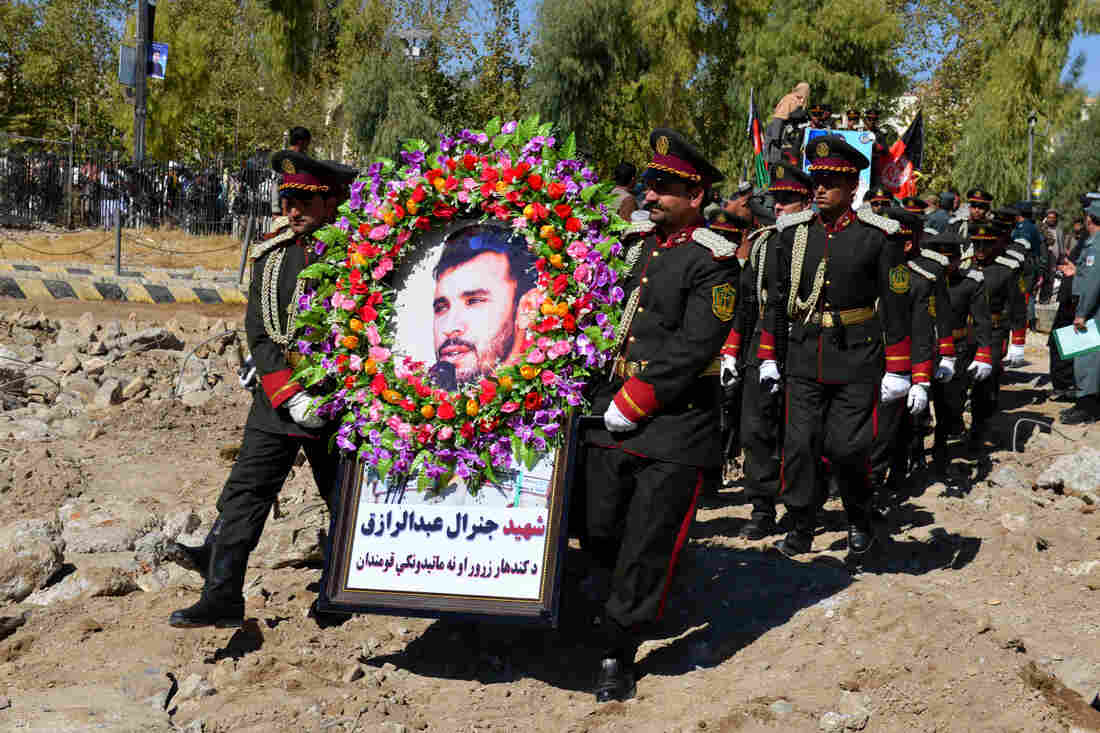 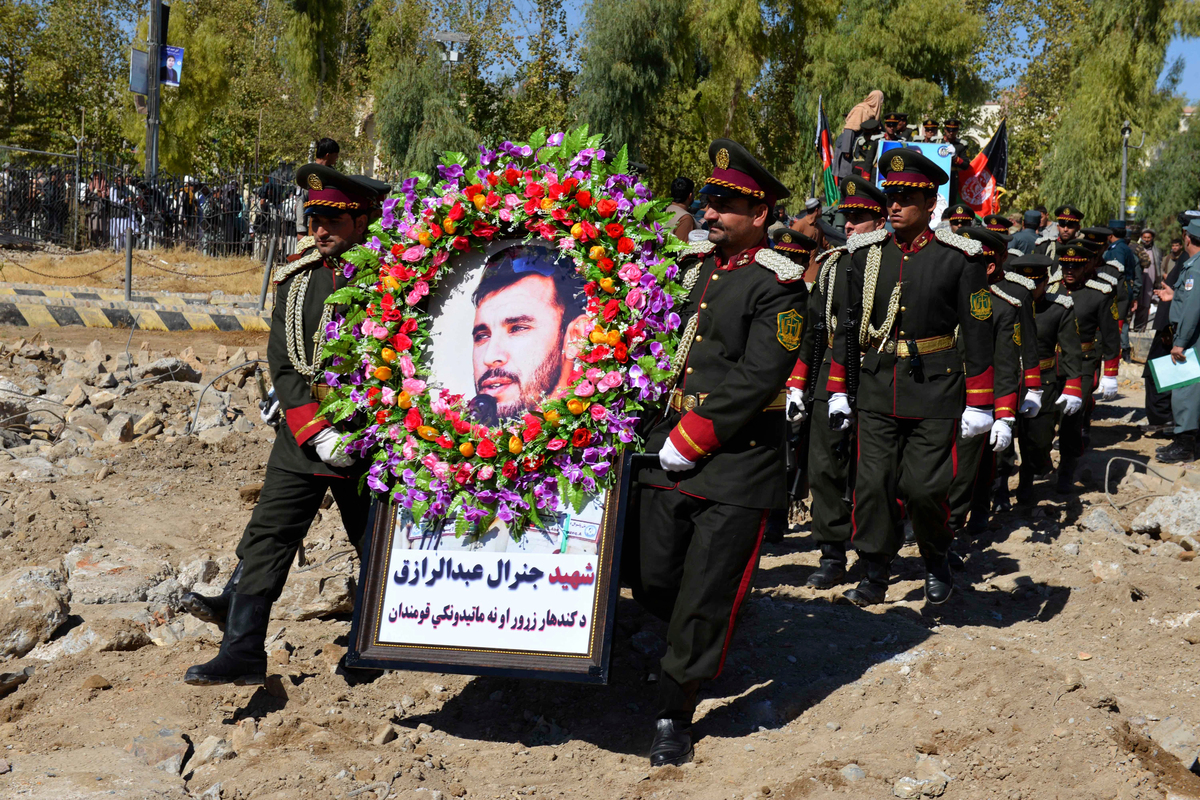 Guards of honor carry a photo of Brig. Gen. Abdul Raziq, Kandahar police chief, at his burial ceremony in Kandahar in October.

In 2018, Afghanistan bled. Violence claimed the lives of nearly 3,000 civilians between Jan. 1 and Sept. 30, the highest number in that same period since 2014. The death toll of Afghan security forces — which some estimates put at more than 9,000 this year, between 25 and 30 deaths a day — has been called "unsustainable" by the U.S. military.

The leading cause of civilian casualties was the use of improvised explosive devices, according to the U.N. There were suicide attacks and bombings at voting centers, schools and mosques. And there were U.S. airstrikes.

It all took place in this, the 17th year of America's longest war. U.S. combat troops have been in Afghanistan for nearly double the time they were in Vietnam. And the war has touched generations of Afghans.

Of the thousands of lives lost this year, three stand out. The lives and deaths of these three Afghan men help tell the story of Afghanistan and shed light on the challenges the U.S. faces there.

To be a commando in Afghanistan is a great accomplishment and honor. Commandos are the nation's special forces, the best trained and equipped personnel in a military that struggles for resources. They make up a tiny proportion of the armed forces. Both the U.S. and Afghanistan want to increase their numbers by the thousands.

Maj. Shoaib Moradef, who died at age 33 on Sept. 2 in a military airplane accident in northern Afghanistan, was a commando. He was a patriot and a U.S. ally whom NPR first met in the late spring of 2016, when he was in charge of planning all missions for his unit in Kandahar. He worked side by side with American Green Berets, was fluent in English, well-traveled, razor-sharp and fearless. 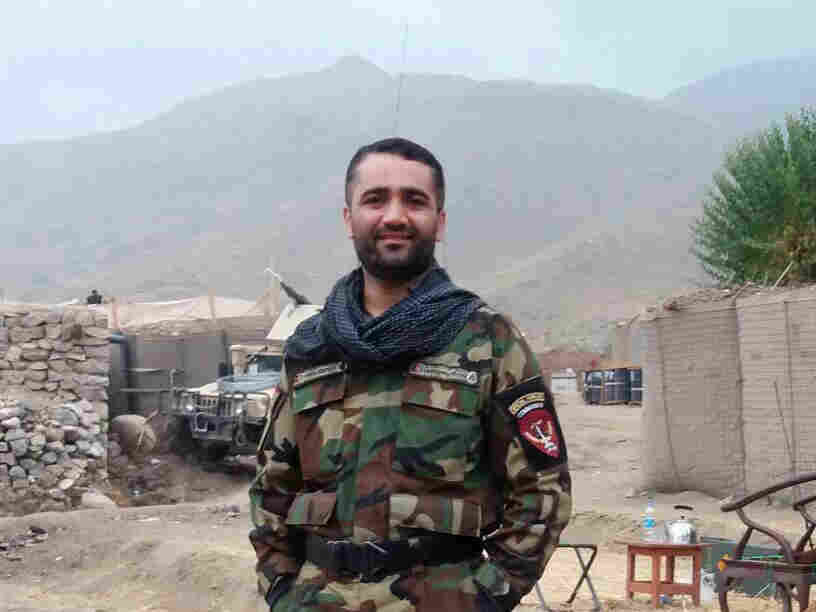 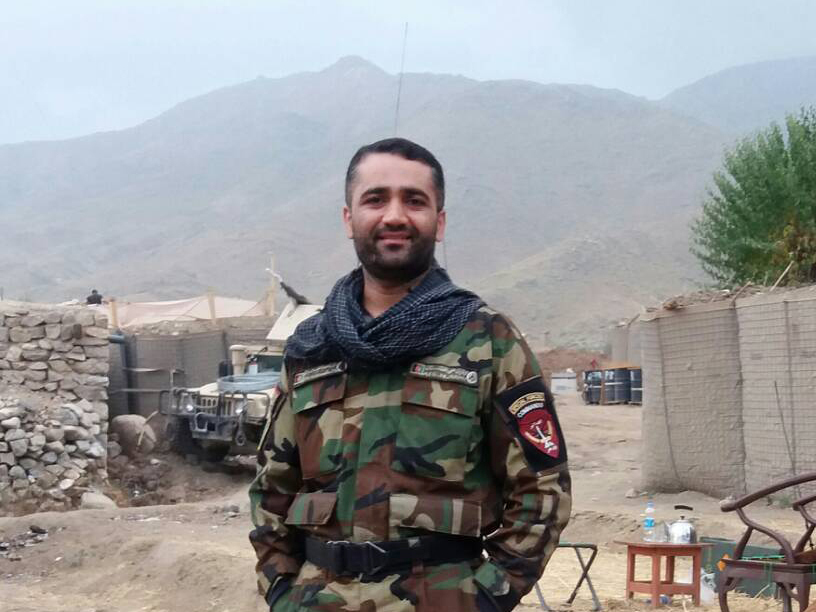 Moradef trained every day. He was a fast runner. He knew his men. And he was entrusted with some of the hardest missions.

In January, when Taliban gunmen stormed Kabul's Intercontinental Hotel, Moradef and his men helped secure the hotel. It took them 14 hours. Moradef also fought ISIS in Nangarhar Province for weeks at a time. He nearly died twice: once from an explosion and another time from an airstrike that missed its intended target.

His final mission, in August, was helping flood victims and negotiating peace talks between a warlord and Taliban forces in Faryab Province. Moradef brought them all together in a room. They even stopped fighting for a while, something he told NPR made him proud.

Abdul Jabar Qahraman, a former general, was running for election to Afghanistan's parliament when he was assassinated on Oct. 17 by a Taliban bomb in his office in Helmand Province.

By all accounts, Qahraman had been one of the most powerful men in the province. In 2016, President Ashraf Ghani appointed him as his special envoy to Helmand and put him in charge of security in the most violent area in the country. But he didn't last long in the job. And many distrusted him.

He had served as a commander in Afghanistan's Soviet-backed military in the 1980s and as a pro-government militia leader in the early 1990s, according to the Afghanistan Analysts Network. Then he went into exile in Russia. He returned to Afghanistan after the fall of the Taliban and reinvented himself as a politician. 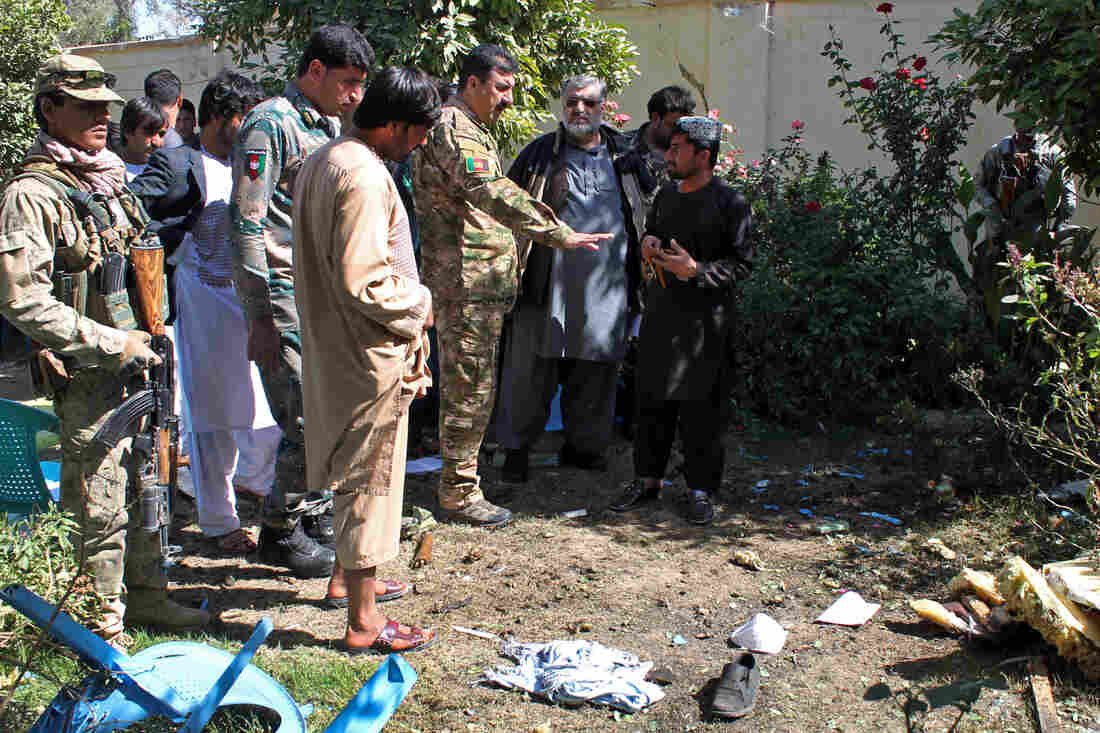 Security forces investigate an explosion that killed Abdul Jabar Qahraman, a candidate in parliamentary elections, at his home, in Lashkar Gah, the capital of southern Helmand Province, in October. AP hide caption 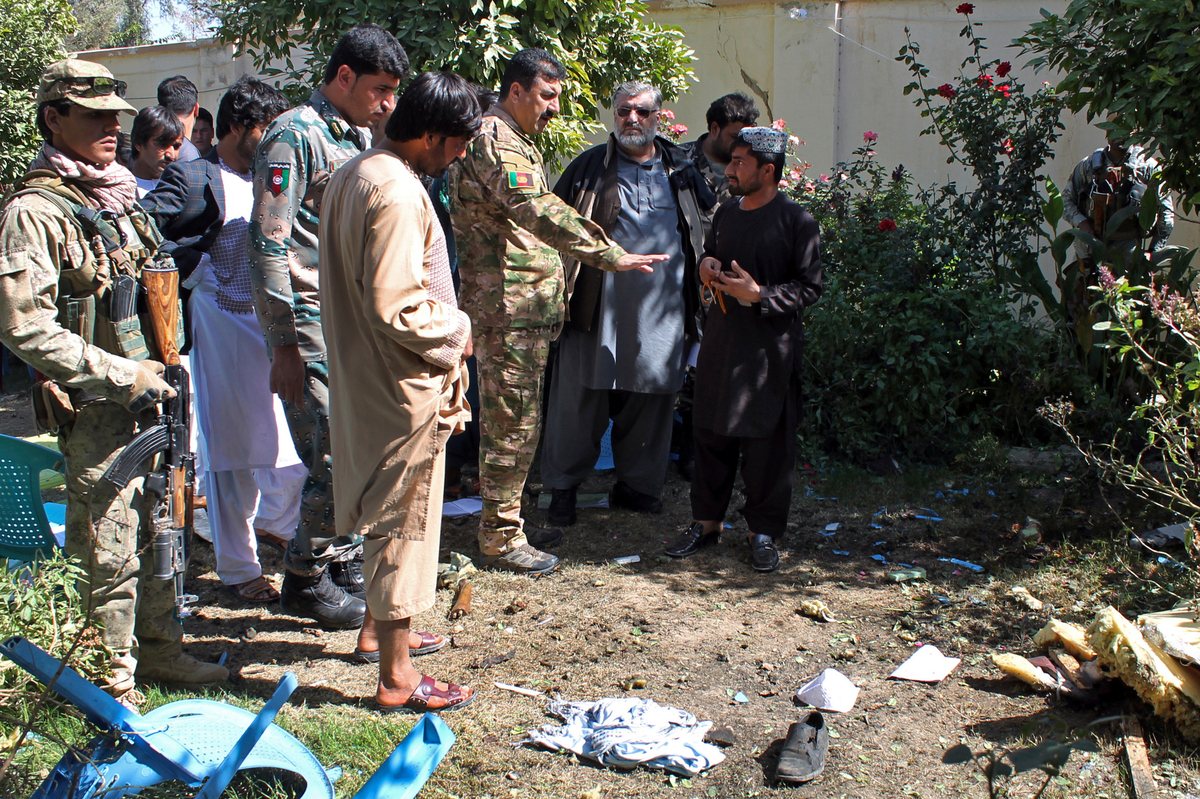 Security forces investigate an explosion that killed Abdul Jabar Qahraman, a candidate in parliamentary elections, at his home, in Lashkar Gah, the capital of southern Helmand Province, in October.

According to Afghan officials, he had ties to Pakistani intelligence. U.S. intelligence told NPR he was "dirty" (and referred to him with an expletive) and suggested he was involved in the illicit drug trade.

Qahraman worked deals with the Taliban at the same time he was negotiating with the U.S.-backed Afghan government. He sought U.S. help in neutralizing his rivals in Helmand, and hardened his opposition to the U.S. after the Americans refused to help him.

Investigators said he was linked to a Taliban attack on an Afghan military convoy carrying four NPR journalists. The convoy was ambushed on June 5, 2016, as we rode from Lashkar Gah, Helmand's provincial capital, to the town of Marjah. NPR photographer David Gilkey and our Afghan colleague Zabihullah Tamanna were killed in the attack.

A day after the Taliban bombed Qarahman in his office, another Taliban attack in southern Afghanistan made headlines. In Kandahar, a teenage Afghan guard allied with the Taliban shot and killed Brig. Gen. Abdul Raziq while he was meeting with American generals, one of whom was wounded.

Raziq was born in Kandahar. Like many Afghans in the south, he did not know his exact birth date. In 2011, he took on a difficult job as Kandahar's provincial police chief. He was maybe 35 at the time. In the years that followed, he became one of the most powerful commanders in the country.

Raziq bragged about the many times the Taliban tried to kill him, pointing to a burned spot on his hand — a scar from a Taliban bomb.

In May 2015, surrounded by his armed guards, he told NPR how he pushed the Taliban out of Kandahar.

"Now I can drive with you guys until 90 kilometers from here. You cannot find any Taliban there," he said proudly.

The American military called Raziq a great ally. But like many Afghans, he didn't want any foreign power to control his country. 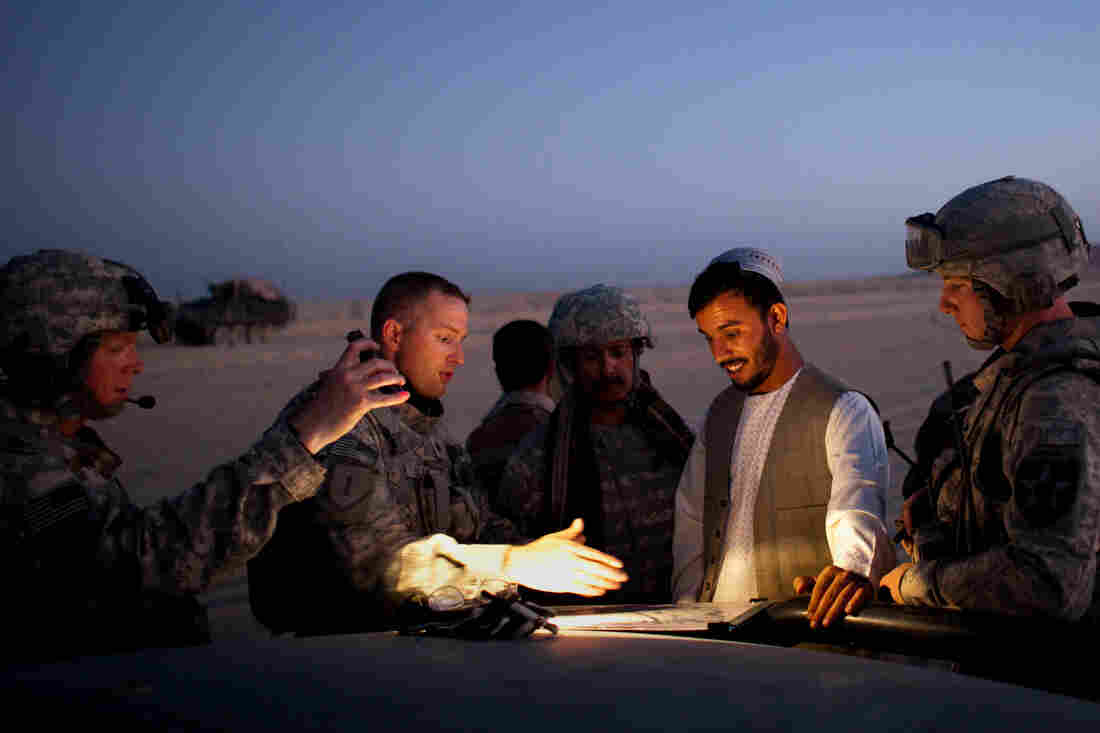 U.S. Lt. Col. William Clark (second from left) talks with Brig. Gen. Abdul Raziq, then serving as the border police commander for southern Afghanistan, during a joint patrol along the border with Pakistan in 2009. Emilio Morenatti/AP hide caption 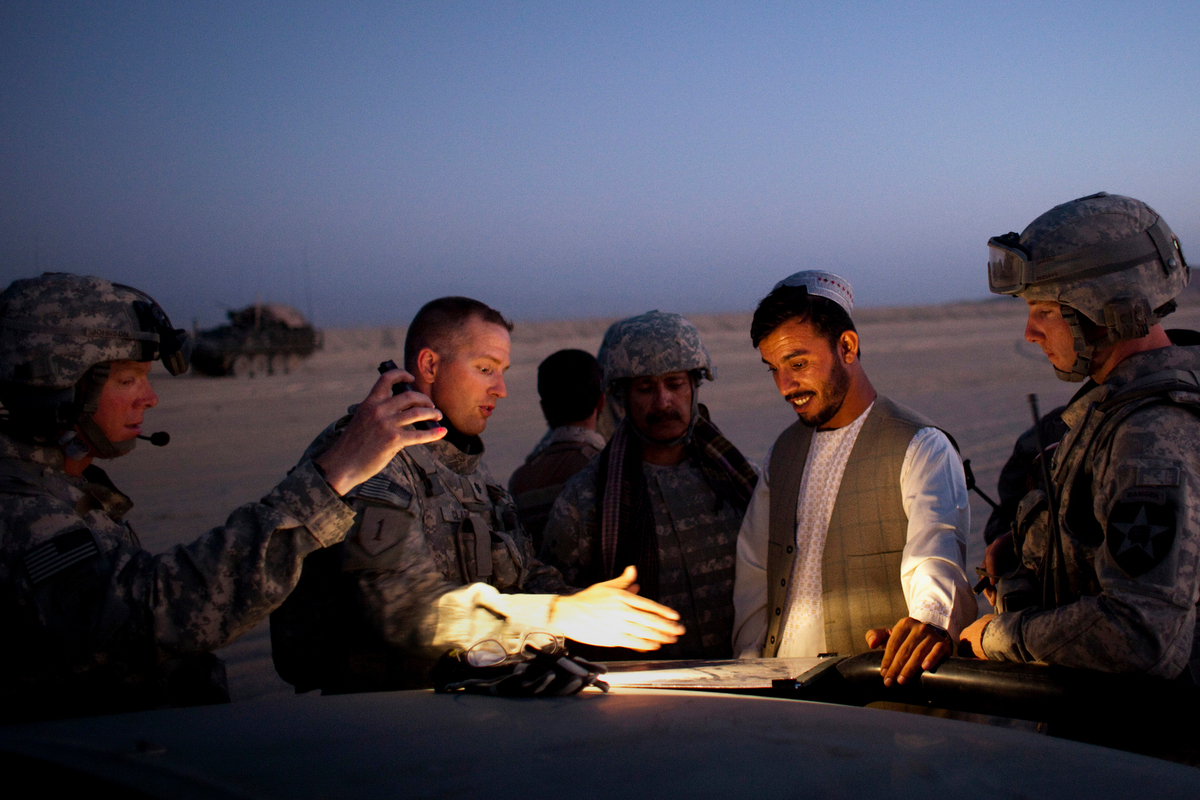 U.S. Lt. Col. William Clark (second from left) talks with Brig. Gen. Abdul Raziq, then serving as the border police commander for southern Afghanistan, during a joint patrol along the border with Pakistan in 2009.

Raziq kept the peace in Kandahar for seven long years. But he was implicated in the drug trade. And he could be brutal. He was accused of torturing those he arrested, using electric shocks and sometimes power drills. He executed prisoners without trial. The U.N. and human rights groups denounced him. Some in the Afghan government and even in the U.S. government wanted to cut ties with him.

Raziq said the choice was between him and the Taliban.

"What we are doing in this country is for law enforcement," he told NPR in 2015. "If serving for the people is like crime, then I have to go to my people and ask them what they decide about me."

After that interview with Raziq ran on NPR, one U.S. officer told NPR: "If it wasn't for Raziq, the Taliban would be at the gates of Kandahar Airfield," the American base.

Another, referring to Raziq, said bluntly: "We created that monster."

If Qahraman actively opposed U.S. involvement in Afghanistan and Moradef proved to be a selfless ally, Raziq — like many of his fellow Afghans — navigated the large space in between.