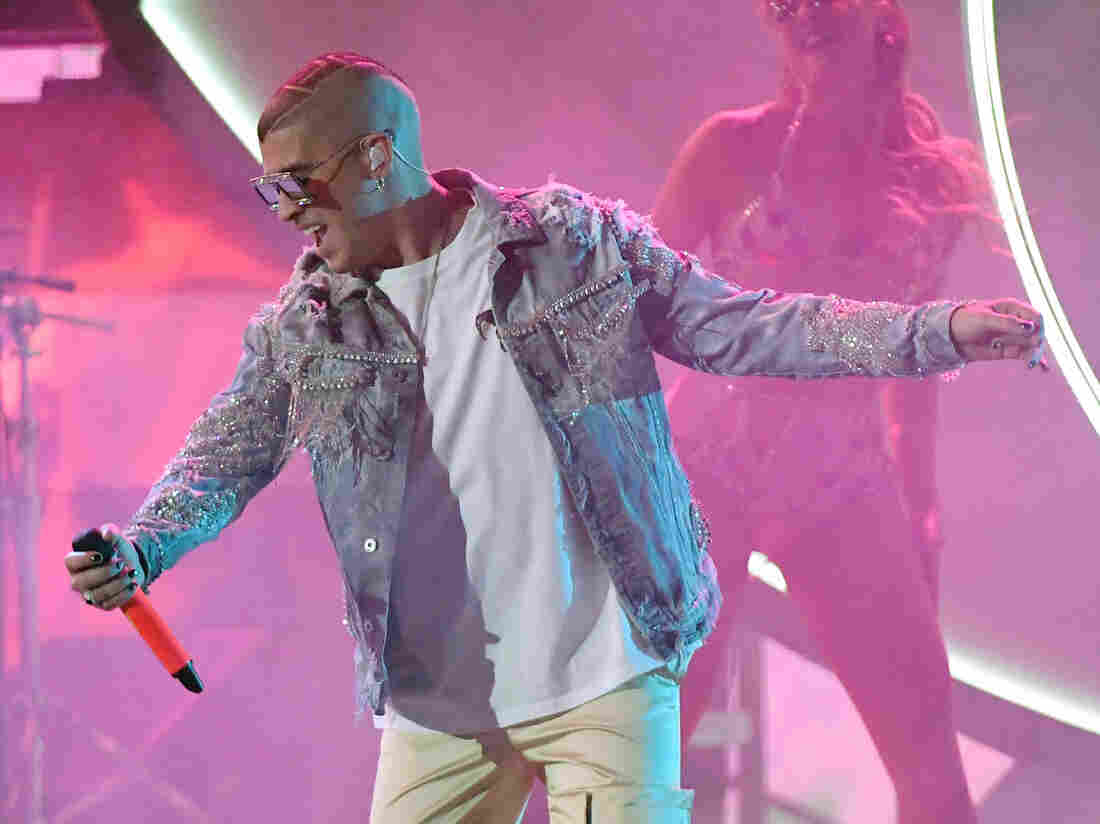 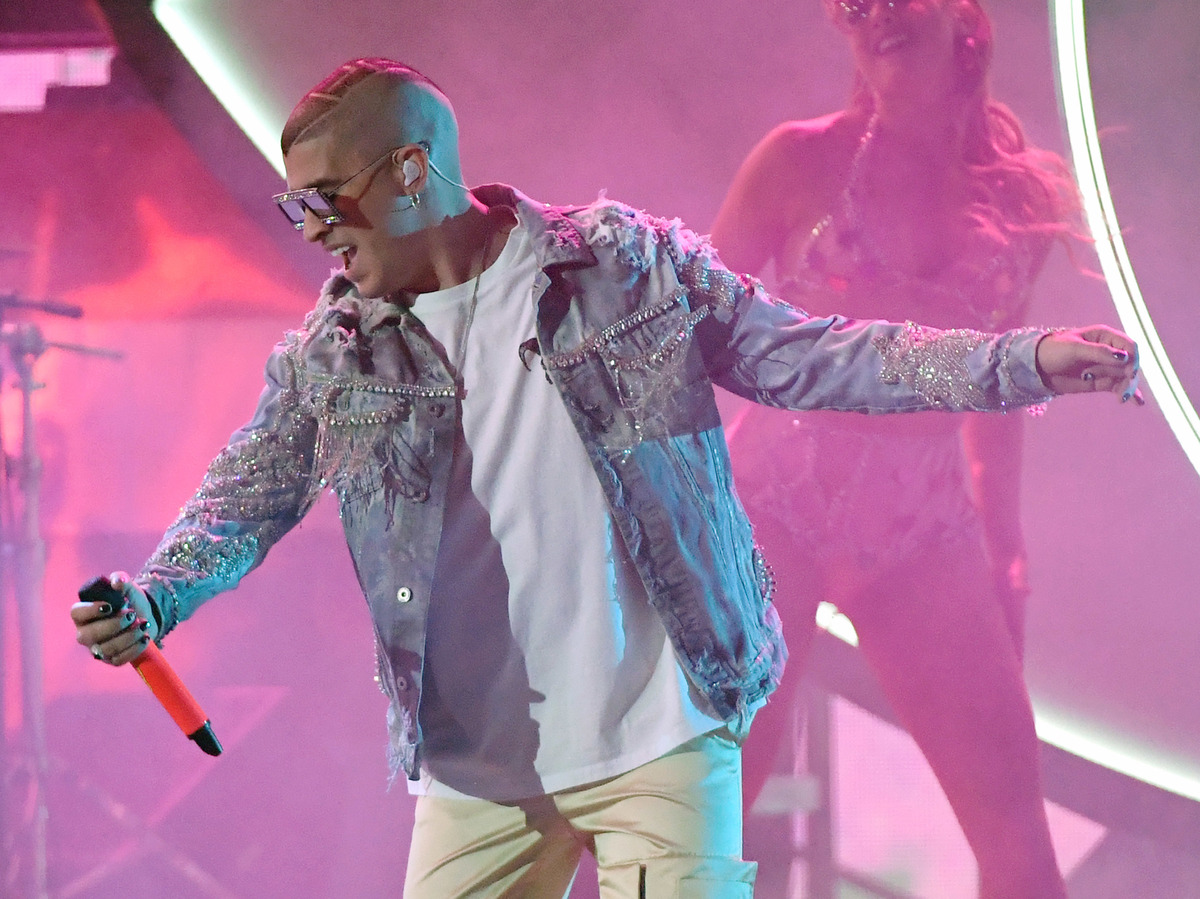 Bad Bunny onstage at the Latin Grammy Awards in November.

NPR Music's Alt.Latino podcast recently released its year-end list of 2018's best songs and albums. Along the way, the team has done some reading and deep thinking about a trend that started in 2017 has only gained momentum: In the world of streaming music services, Latin artists have been cleaning up.

"It's all about streaming," Alt.Latino host Felix Contreras says."YouTube, Spotify, Apple Music and not just here, but in Spanish-speaking countries around the world."

"According to data from YouTube," contributor Stefanie Fernández says, "the three most streamed artists with the most views in 2018 were all Spanish-language artists, [with] eye-popping numbers from Ozuna, at 10 billion views, and J Balvin, at 11 billion views."

Contreras and Fernández joined NPR's Leila Fadel to break down this latest Latin explosion, and why this time around it may be indicative of a bigger generational shift. Hear the radio version at the audio link, and read on for an edited transcript.

Leila Fadel: The trend you've been observing is Spanish-language artists quickly becoming some of the most streamed in the U.S. and around the world. Where does that start?

Contreras: Last year there was a perfect storm of a catchy tune, an unforgettable video, and a title that could be easily sung by those who don't speak Spanish: "Despacito" by Luis Fonsi and Daddy Yankee was the song of the spring and summer of 2017, and it was like catching lightning in a bottle — unexpected, organic, and driven by the fans, not conceived in a marketing meeting. And that sparked interest in Latin pop music. It was fueled by a popular reggaeton beat, and this thing took hold all over the world.

Fadel: Right, I mean, you couldn't really go anywhere without hearing that song.

Fernández: And this year, the most viewed video was the remix of "Te Bote."

Contreras: This is a track that included a lot of heavy hitters.

Fernández: Yeah, it's not new, but the remix with Ozuna, Bad Bunny, Nicky Jam, Casper, et al. was incredibly popular, because it gathered the most popular players in the genre together in one video.

Contreras: Eight of the 10 most watched music videos released this year on YouTube are Latin songs, and that's not an accident.

Fadel: OK, We've talked about the numbers, so put on your sociologist hats for a moment: What's going on that's driving this?

Contreras: Demographics, first of all. The Latino population skews very young, which means they're more tech-savvy, more mobile devices — and they're mostly bilingual.

Fernández: And they've been turning to streaming services in big numbers as a younger group — YouTube especially, which is a more egalitarian platform, I think, than Apple Music and Spotify. And of course, it has held the monopoly on video streaming for over a decade now. It's easily shareable, and around the world, has been accessible for a very long time.

Contreras: After "Despacito," and later, [J Balvin's] "Mi Gente," that led to explosions in revenue last year. They discovered that you could make a lot of money with this stuff, and it proved that streaming, for the first time, was the most profitable way to sell music, especially to this demographic.

Fadel: Stef, you talk about this group of young Latino listeners. Do you consider yourself part of it?

Fernández: I guess I am! I honestly grew up listening to reggaeton at parties and out in the world, but I never considered it music that I liked, strangely enough. I think this is common across younger Latin-American groups: As I got older, I realized I do love this music. It was music that was previously looked down upon and seen as low-class in many ways across our community — but nowadays it has become impossible to ignore the popularity and the infectiousness of it.

Fadel: And Felix — how do I put this delicately — you're not exactly part of that youth-driven trend?

Contreras: [laughs] My experience reflects the declining influence of Latino baby boomers. Not unlike the entire baby boomer class, when it comes to music we were really slow to catch on to streaming. I make Spotify lists, but I still ask bands to send me CDs to preview for Alt.Latino, because I listen mostly in my car.

Fadel: That's real old-school! OK, time for a little best-of. Stefanie, what was on your list this year?

Fernández: A lot of the artists that we've talked about already: J Balvin, Bad Bunny, definitely. But this year, especially in streaming, was kind to women in reggaeton, which is something new. In particular, Natti Natasha and Becky G released a song called "Sin Pijama" that, while it's not necessarily a feminist anthem, is definitely a reflection of the growing power of women in reggaeton.

Fadel: We've heard the word reggaeton a few times now; remind us what that is.

Fernández: Here's the thing — reggaeton is not a new genre. It's been around for 40 year, and was pioneered by Afro-Panamanians in the 1980s and 1990s. It's a genre that takes many genres from the Caribbean — dembow, reggae, dancehall — and transforms it into urban music that is danceable. And infuses rap and trap, nowdays.

Fernández: Well, we're going to be watching the Grammys in February. We remember "Despacito" losing record of the year to Bruno Mars, despite being the most ubiquitous song of that year. Time will tell if Cardi B, Bad Bunny, and J Balvin's "I Like It" can take record of the year this year. But for now, "estamos bien."

Ned Wharton contributed to the radio version of this story.