Accessibility links
More Than A Million Florida Felons Aren't Sure Yet Whether They Can Register To Vote The incoming Florida governor and other politicians in the state say they will need to weigh-in before the amendment passed by voters in Nov., giving voting rights back to felons, is implemented. 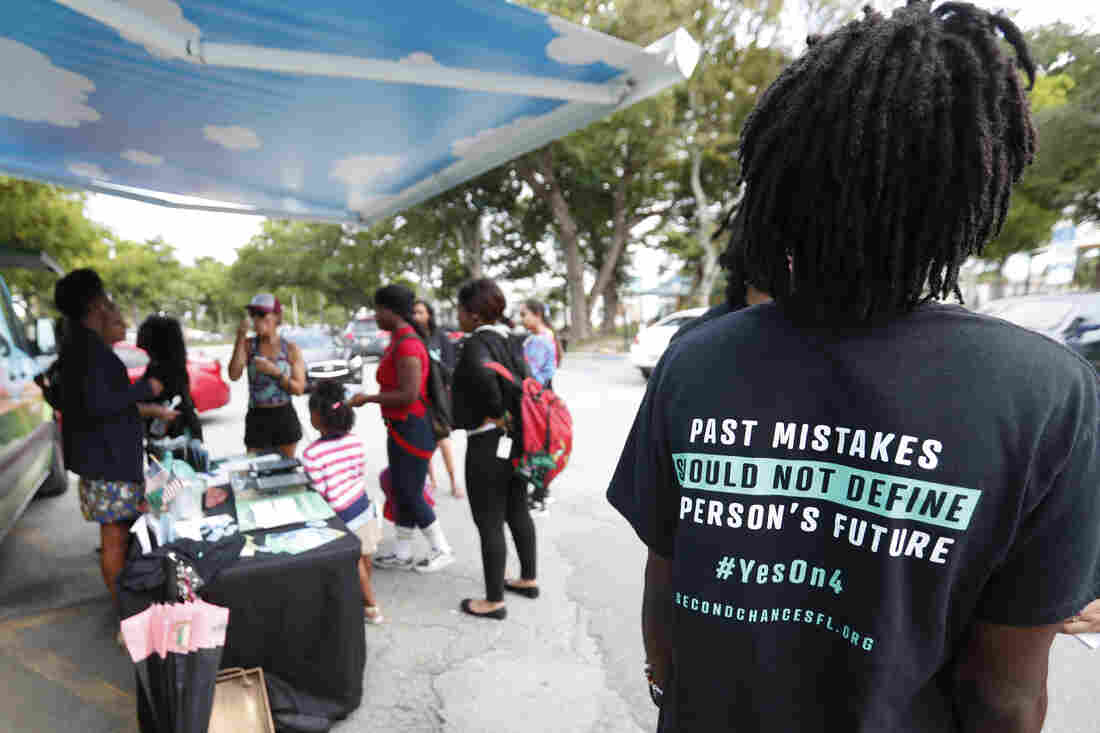 People gather around the Ben & Jerry's "Yes on 4" truck as they learn about Amendment 4 in Miami, which passed election day. Now, Gov.-Elect Ron DeSantis says he and state lawmakers will need to weigh-in before the amendment goes into effect, giving voting rights back to most felons in the state. Wilfredo Lee/AP hide caption 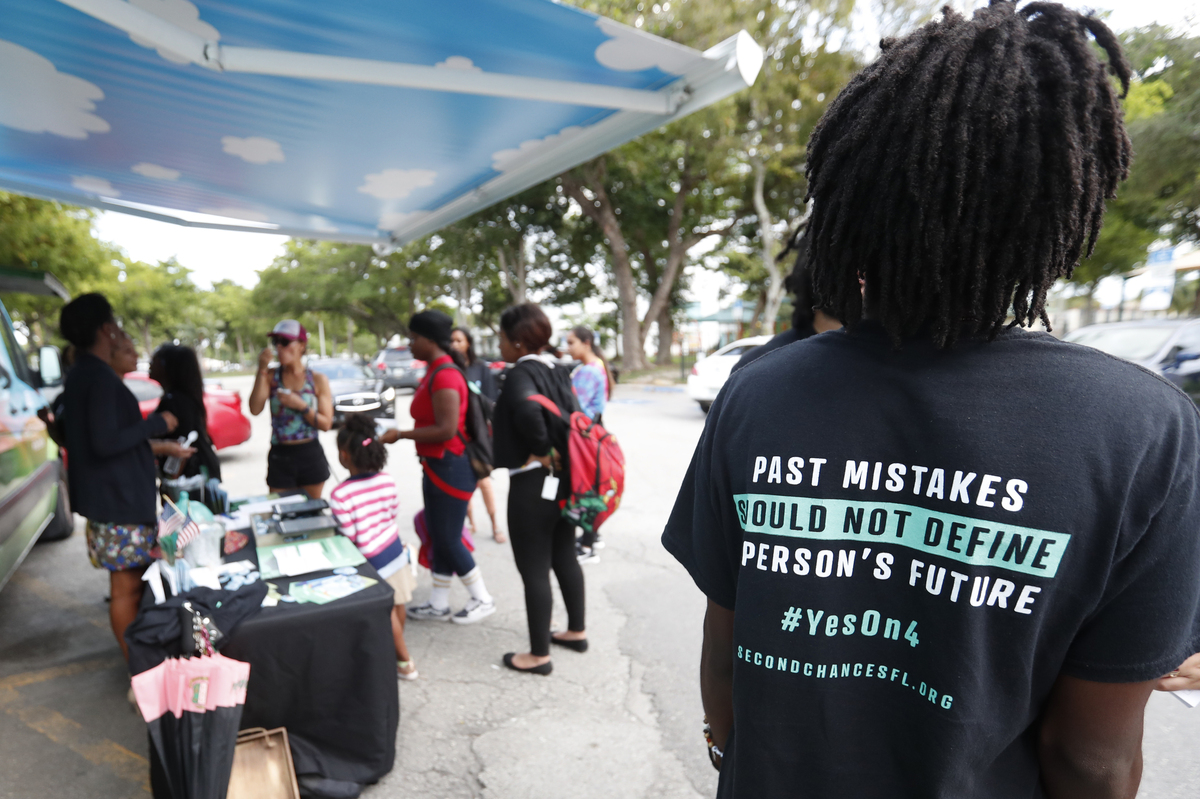 People gather around the Ben & Jerry's "Yes on 4" truck as they learn about Amendment 4 in Miami, which passed election day. Now, Gov.-Elect Ron DeSantis says he and state lawmakers will need to weigh-in before the amendment goes into effect, giving voting rights back to most felons in the state.

Beginning Jan. 8, more than a million new people may be able to register to vote in Florida. They're convicted felons who have served their sentences and finished their parole or probation.

In November, voters in the state overwhelmingly passed a ballot initiative for a constitutional amendment to restore voting rights to felons in Florida, convicted murderers and sex offenders excluded. It was one of the few remaining states to automatically restrict felons' ability to vote.

But the incoming governor, Republican Ron DeSantis, some state lawmakers and election officials say they need to weigh in on the amendment before any changes are made.

"It says that voting rights 'shall be restored.' I don't know what is unclear about that," says Howard Simon, who was the executive director of the American Civil Liberties Union of Florida for decades before retiring last month. He helped draft the ballot amendment and calls it "self-executing." Meaning — no one has to touch it.

Gov.-elect Ron DeSantis, who ran against the amendment, declined a requests for an interview for this story, but his office sent this statement: "The Governor-elect intends for the will of the voters to be implemented but will look to the Legislature to clarify the various questions that have been raised."

That's worrying some activists. Local elections are taking place as early as Feb. 2019, in Florida and the legislature doesn't meet until March.

Despite that, many potential voters with felony convictions say they are planning to go to their elections office on Jan. 8 to register — no matter what.

"It is very vital that we go out the day of in numbers to show the world that we're here to make it right again," says Tranassa White who is from Pensacola, Fla., and has a felony conviction. "Our voice was silent when we were arrested and convicted, and so this allows us to speak again."

It's that impending date that Republican state Sen. Dennis Baxley says he thinks is causing unnecessary panic. Baxley is the chairman of the Ethics and Elections Committee and any legislation about how this gets implemented would have to pass by his desk.

"The president of the Senate has already clearly stated that we're not going to slow walk anything. We're going to implement what people voted for, but we want to do it in a way that it works."

Felons In Florida Want Their Voting Rights Back Without A Hassle

Several times in the last decade, a citizen ballot initiative in Florida has overwhelmingly passed only to be overtaken by the Republican-dominated state government. Few of those attempts have been successful, though, courts have rejected their proposals.

According to Sen. Baxley, the potential issues are in the details. Like how exactly the counties will parse out sex offenders and convicted murderers, who will not regain a right to vote.

County election officials haven't gotten guidance from the outgoing Gov. Rick Scott's administration about how to interpret who can vote. Baxley says that's where lawmakers might need to step in — to get the whole state on the same page.

"So that you don't have 67 supervisors of election interpreting in different ways as to how they validate this person's eligibility."