Accessibility links
Jair Bolsonaro, A Polarizing Figure, Prepares To Become Brazil's President On New Year's Day, Jair Bolsonaro will be sworn in as president. He's an admirer of Donald Trump, and his rise to power has created — and reflected — deep divisions among Brazilians. 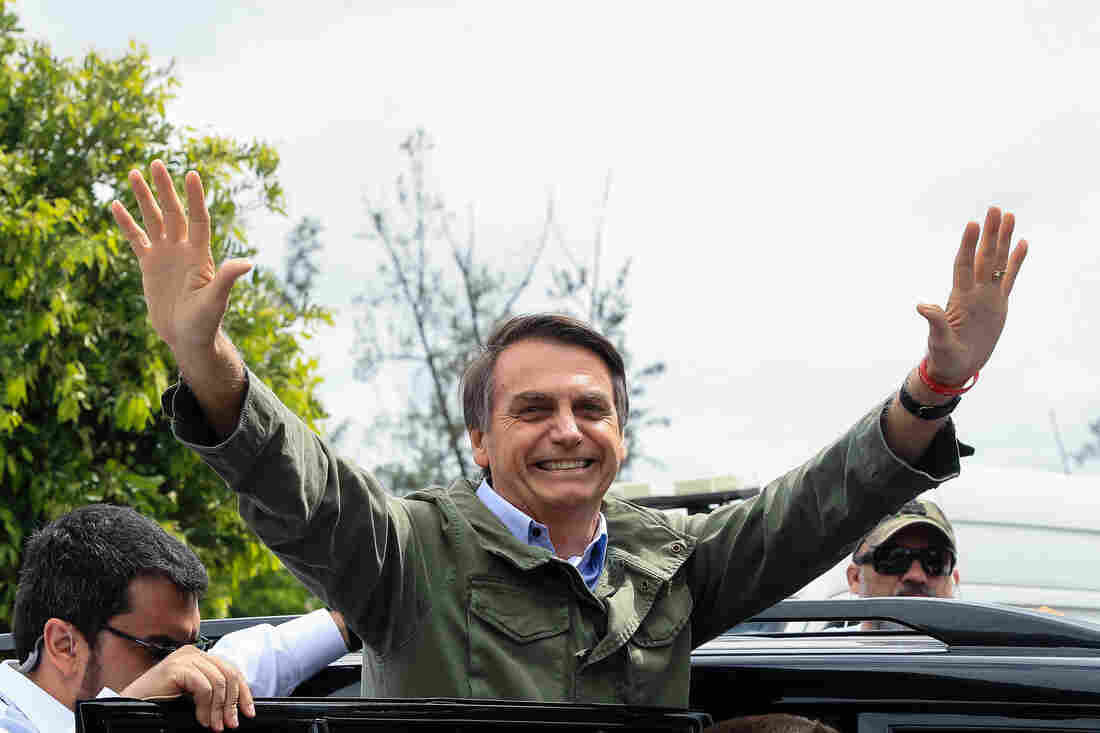 On New Year's Day, Jair Bolsonaro will be sworn in as president of Brazil. He's an admirer of Donald Trump, and his rise to power has created — and reflected — deep divisions among Brazilians. Buda Mendes/Getty Images hide caption 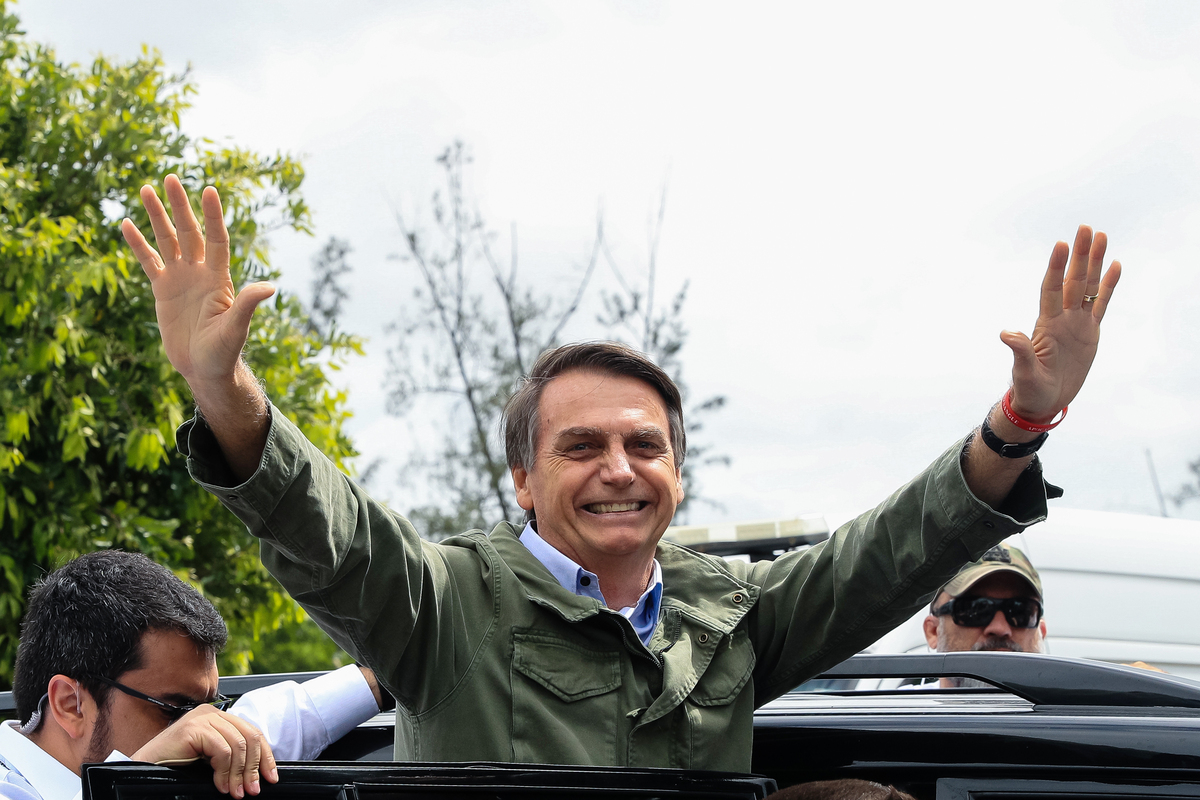 On New Year's Day, Jair Bolsonaro will be sworn in as president of Brazil. He's an admirer of Donald Trump, and his rise to power has created — and reflected — deep divisions among Brazilians.

The global advance of populist nationalism will reach another milestone on New Year's Day, when Jair Bolsonaro is sworn in as president of Latin America's largest nation, Brazil.

Officials predict that up to 500,000 people will flood the streets of the capital, Brasília, to celebrate his inauguration, which will take place inside the chamber of the national Congress.

Bolsonaro's ascent to power is a pivotal moment in South America. It marks another reversal of the "pink tide" that swept leftist leaders into office across much of the map in the late 1990s and early 2000s, and a major tilt toward Washington in a region that often views the U.S. with suspicion: Bolsonaro is an avid admirer of Donald Trump.

A retired army captain and veteran congressman from the far right, Bolsonaro assumes office after winning an election runoff in October with a margin of about 10 million votes over his rival from the leftist Workers' Party. He did so despite spending most of his campaign in the hospital, after being stabbed at a campaign rally in September.

His huge victory delivered a humiliating riposte to political pundits who, for much of his campaign, portrayed Bolsonaro as a showboating maverick who was about as likely to become president as he was to play in Brazil's star-studded soccer team.

Bolsonaro, 63, takes charge amid a wave of optimism about his presidency among Brazilians who yearn for a solution to the country's chronic epidemic of crime and corruption. They warm to his promise of restoring traditional Christian family values and are profoundly disillusioned by the leftist politicians who have governed Brazil in recent years.

The public's hopes appear to have been lifted by the appointment of Judge Sérgio Moro as justice minister. He is a celebrated anticorruption campaigner who spearheaded the "Car Wash" investigation that unearthed massive graft in the highest levels of Brazil's government and industry. 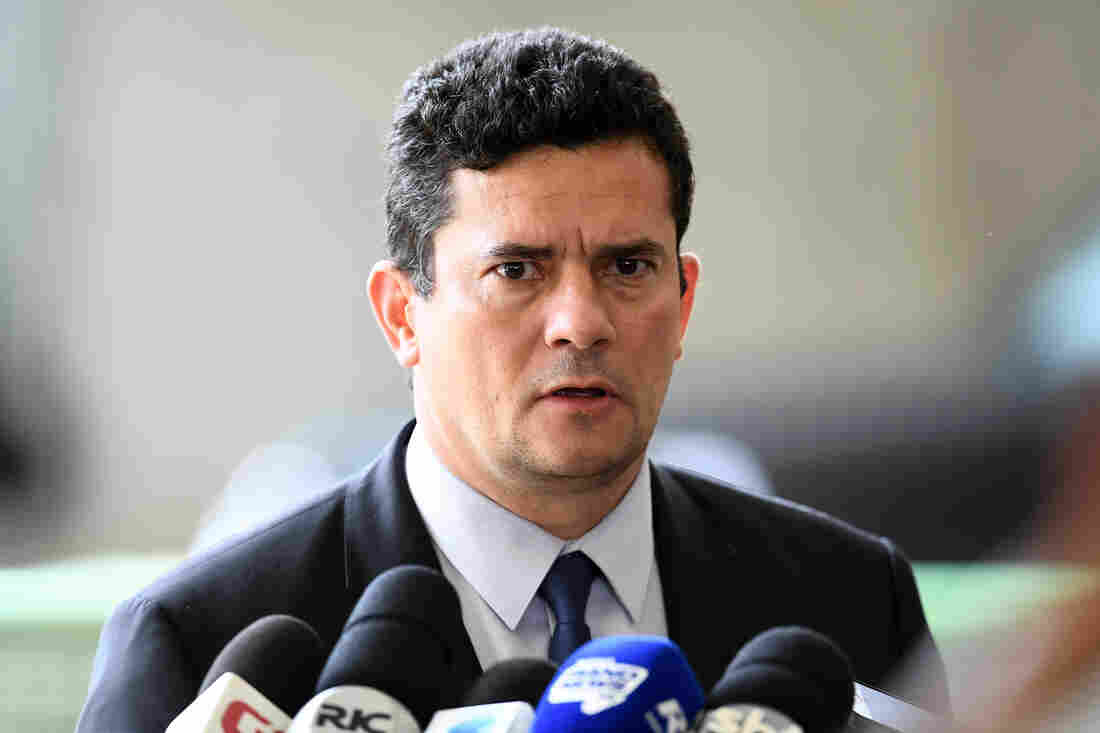 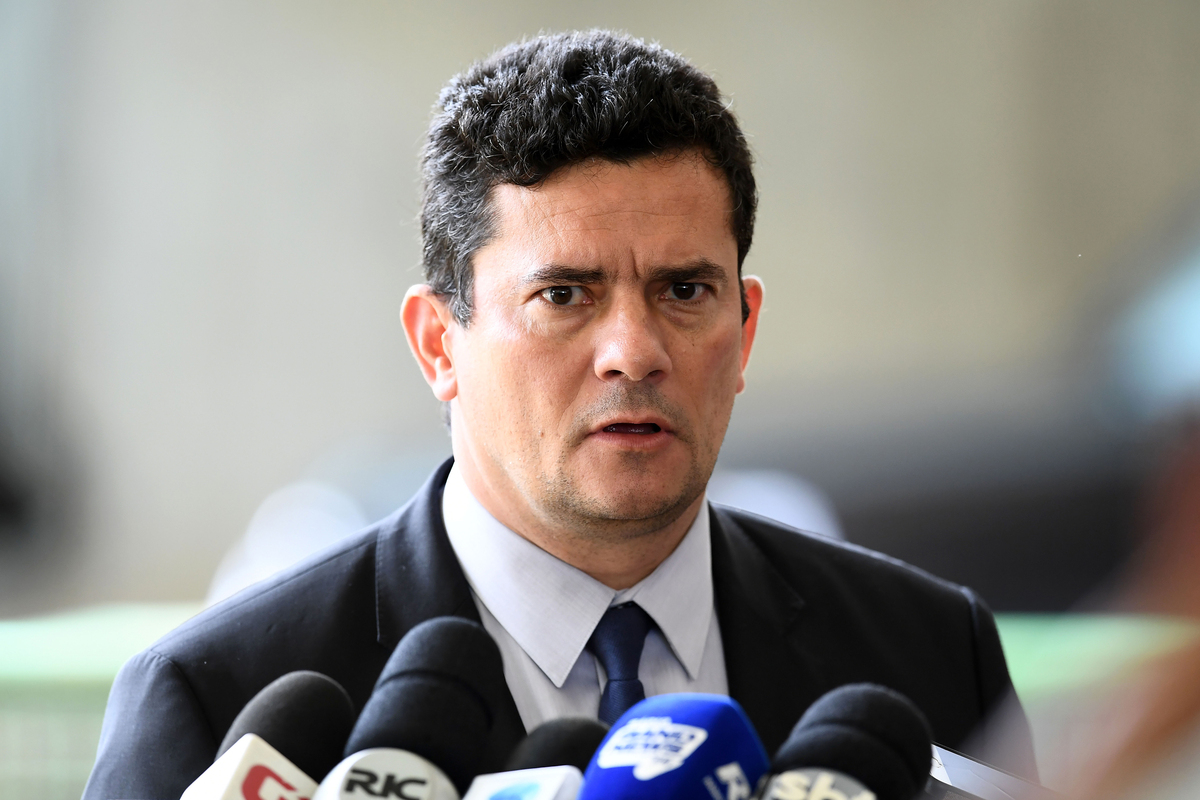 Judge Sérgio Moro, appointed by Bolsonaro as justice minister, speaks to journalists at the transitional government's headquarters in Brasília in December.

That multi-pronged inquiry led to the jailing of some of Brazil's most powerful executives and politicians, including Bolsonaro's main rival, Luiz Inácio Lula da Silva, a two-term former president and leftist who sees Moro's appointment to government as evidence of a plot to bar him from a third term.

A recent survey by Ibope found that Bolsonaro's popularity ratings have reached 75 percent in the run-up to his inauguration. A separate survey, by Datafolha, found nearly two-thirds believe that, in the coming months, his government will revive Brazil's economy, which continues to struggle to recover from the country's worst-ever recession.

Under Bolsonaro, Same-Sex Couples In Brazil Fear They'll Lose The Right To Marry

Under Bolsonaro, Same-Sex Couples In Brazil Fear They'll Lose The Right To Marry

Yet many Brazilians view Bolsonaro as a profoundly divisive figure, citing his history of offensive comments about women, black people and the LGBTQ community. These remarks include telling a congresswoman that she did not deserve to be raped by him, and stating that he would rather have a dead son than a gay son.

Bolsonaro insists he is not against homosexuality but opposes the dissemination of "gender ideology," a view he shares with the Evangelical movement that forms a key pillar of his support. In particular, he accuses past leftist governments of "promoting homosexuality" in schools in its efforts to educate children about gender diversity.

Many LGBTQ Brazilians view his government as a potential threat to their rights, and fear Bolsonaro will restrict same-sex marriage, which was legalized in 2013.

In recent weeks, these concerns have produced a surge in same-sex weddings, as couples race into wedlock before Bolsonaro takes power. In November, there were 986 — a rise of nearly 66 per cent over the same period last year, according to government figures.

"We're worried about marriage, because this is a right that we spent a lot of time [fighting] to get, and it is important to keep it," said Sheylli Caleffe, who helped organize a mass wedding ceremony in São Paulo on Dec. 15, in which 38 LGBTQ couples took part. 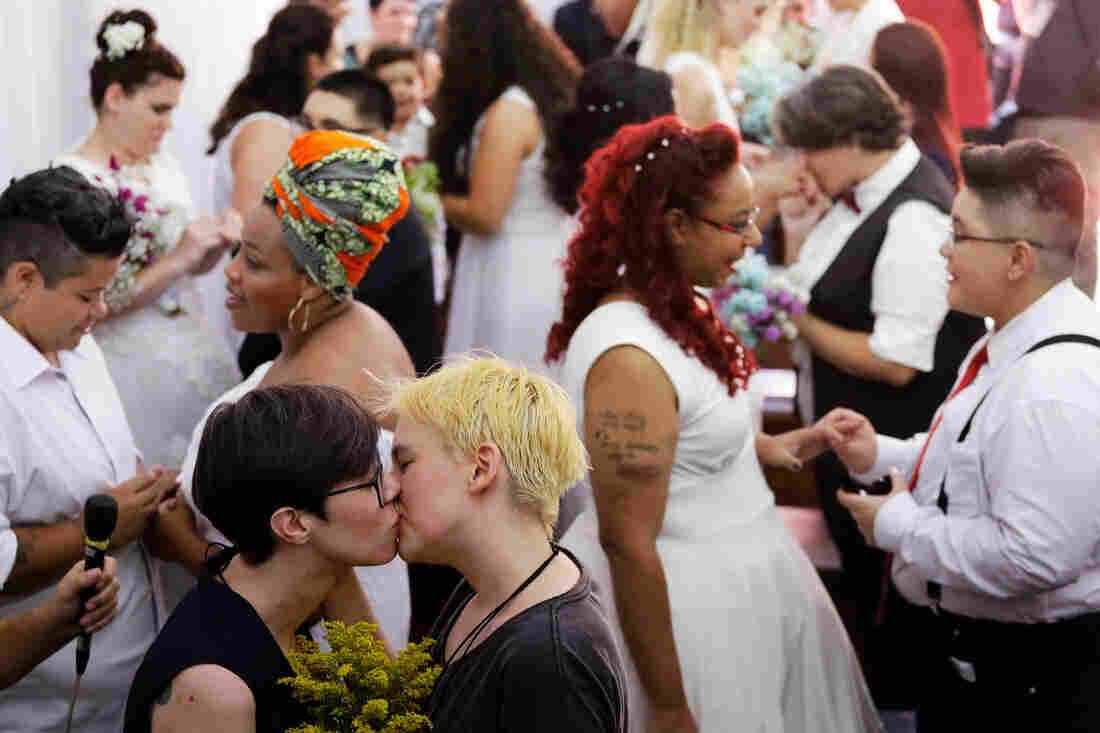 A couple kiss as they get married during a group wedding of same-sex couples in São Paulo in December. After Bolsonaro's election in October, hundreds of same-sex couples began to marry, fearing that their right to do so will be curtailed by the new administration. Nelson Antoine/AP hide caption 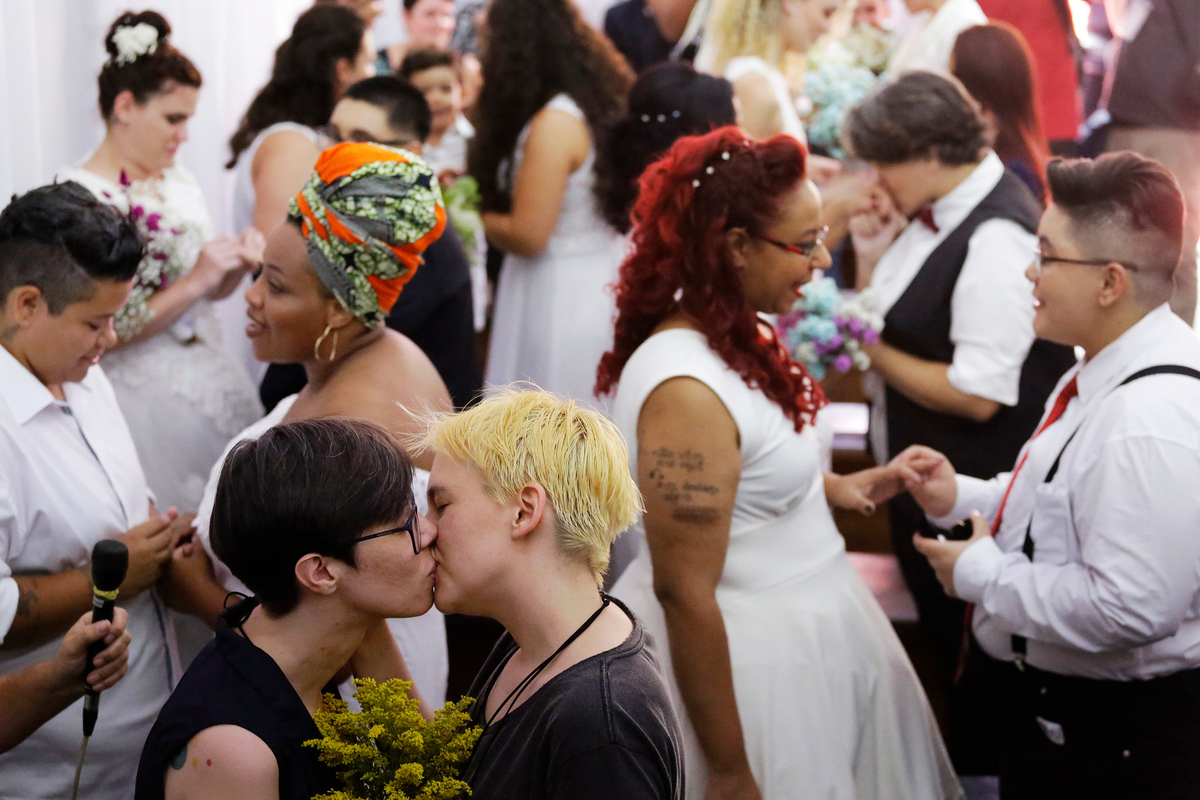 A couple kiss as they get married during a group wedding of same-sex couples in São Paulo in December. After Bolsonaro's election in October, hundreds of same-sex couples began to marry, fearing that their right to do so will be curtailed by the new administration.

That event was organized by Casa 1, a group that runs a shelter for abuse victims in the city. Using crowdfunding, it covered the legal costs of the marriages at a registrar's office and also the ceremony, which was largely a symbolic political gesture.

"We are going to marry today because we want security," said Lucas Nascimento, a 22-year-old blogger, as he nervously prepared with his partner, Felipe Lima, 22. "We don't know what's going to happen."

Couples applied online to be included in the ceremony. "When we received Casa Um's email saying we were one of the selected couples, this was a huge joy," said Fernanda Spinelli, 25, a telemarketer who was clad for the occasion in a flowing white wedding dress. "After Bolsonaro's victory, we felt really threatened."

In the two months since the election, Bolsonaro's critics have watched closely as he and his transition team gradually assembled his cabinet. The final line-up comprises 22 ministers, of whom only two are women. The inclusion of seven retired military commanders underscores the remarkably close relationship between Brazil's new government and its armed forces.

Particular criticism has been leveled at Bolsonaro's choice of foreign minister. Ernesto Araújo is a 51-year-old middle-ranking career diplomat who has described climate change as a conspiracy by "cultural Marxism." His appointment alarms environmentalists who already consider Bolsonaro a threat to the Amazon rain forest because of his desire to loosen environmental regulations and his close ties with Brazil's influential agri-business lobby.

For the first time since Brazil became a federal republic in 1889, its government will have no minister from the country's north or northeast, traditionally a stronghold of the left.

The northeast includes the predominantly black city of Salvador. Interviews with residents there point to a deep wariness about Bolsonaro — especially his hard-line policies on law and order, which include allowing Brazil's public far wider access to firearms and giving the police even more scope for the use of lethal force against suspects.

On Oct. 7, the city was badly shaken when a widely celebrated Afro-Brazilian musician and master of capoeira — a martial art that fuses ritual combat with music and dance — was stabbed to death by a supporter of Bolsonaro after an argument in a bar.

For many in the northeast, the killing of Mestre Moa do Katendê, 63 — `whose real name was Romualdo Rosario da Costa — has come to symbolize the deep divisions within Brazil opened up by Bolsonaro's rise, and stoked by a toxic election campaign fought on social media platforms amid a flood of fake news.

Renilda da Costa, 41, a niece of Moa, says she is "very worried" about what the future might hold.

"I never saw an election that was so violent, so offensive and so disrespectful," she says. Da Costa predicts "more political division."

Since the murder, Bolsonaro has repeatedly called for unity among Brazilians, although it's unclear how this firebrand politician hopes to achieve it: Despite more than a quarter-century in Brazil's Congress, Bolsonaro is still largely defined by his words rather than deeds.

Questions remain about the impact his policies will have on his country's international relations. Will Bolsonaro go ahead with a threat to pull out of the Paris climate agreement? (He said in October he wouldn't, but a month later, Brazil withdrew from a commitment to host next year's U.N. climate conference.) How will he handle China, Brazil's No. 1 export market, which he's accused of "buying" the country?

Will Bolsonaro fulfill his pledge to follow Trump's lead and move the Brazilian embassy in Tel Aviv to Jerusalem — even if it means damaging Brazil's multibillion-dollar meat industry by losing sales to Islamic nations? And what does his rise to power mean for regional efforts to secure regime change in Venezuela, which Bolsonaro views with much the same hostility as Trump?

As for Brazil's 209 million people, they're watching to see if this retired army captain, who has no executive experience, can somehow bring peace and prosperity to their troubled landscape.