Accessibility links
Democrats Plan Vote To Reopen Government On Jan. 3, When They Take Over House The incoming House leadership plans legislation to fund the Department of Homeland Security for a month. President Trump shows no sign of agreeing to their terms, digging in on funding a border wall. 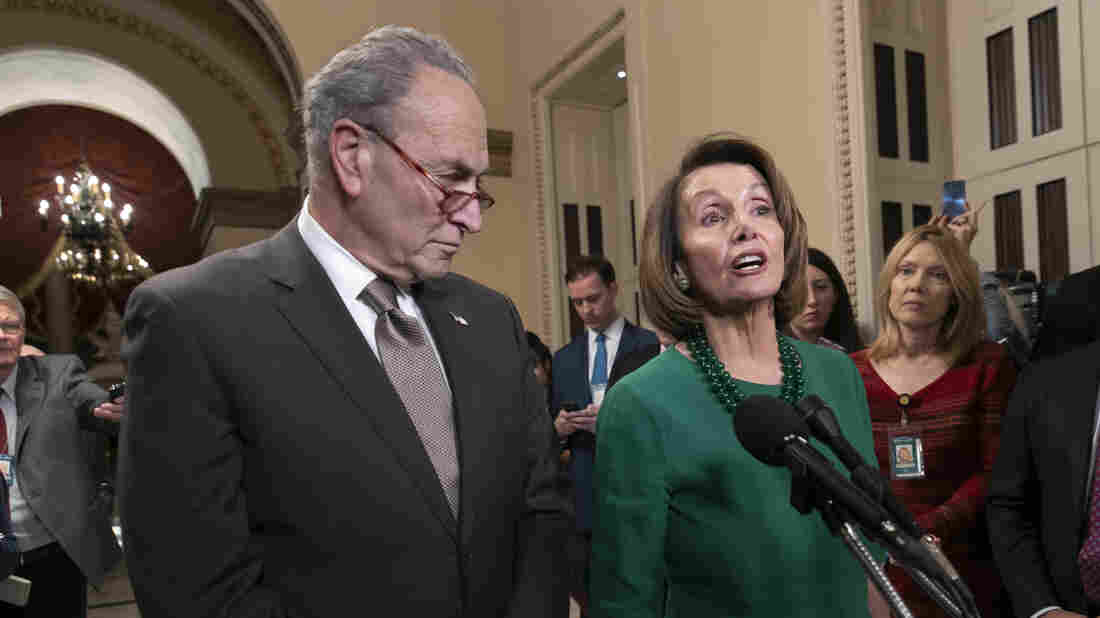 House Speaker-designate Nancy Pelosi, D-Calif., and Senate Minority Leader Chuck Schumer, D-N.Y., address reporters about the fight over funding a border wall before the partial government shutdown. Pelosi will lead House Democrats in voting on a bill to reopen the government when they take power in the House on Thursday. J. Scott Applewhite/AP hide caption 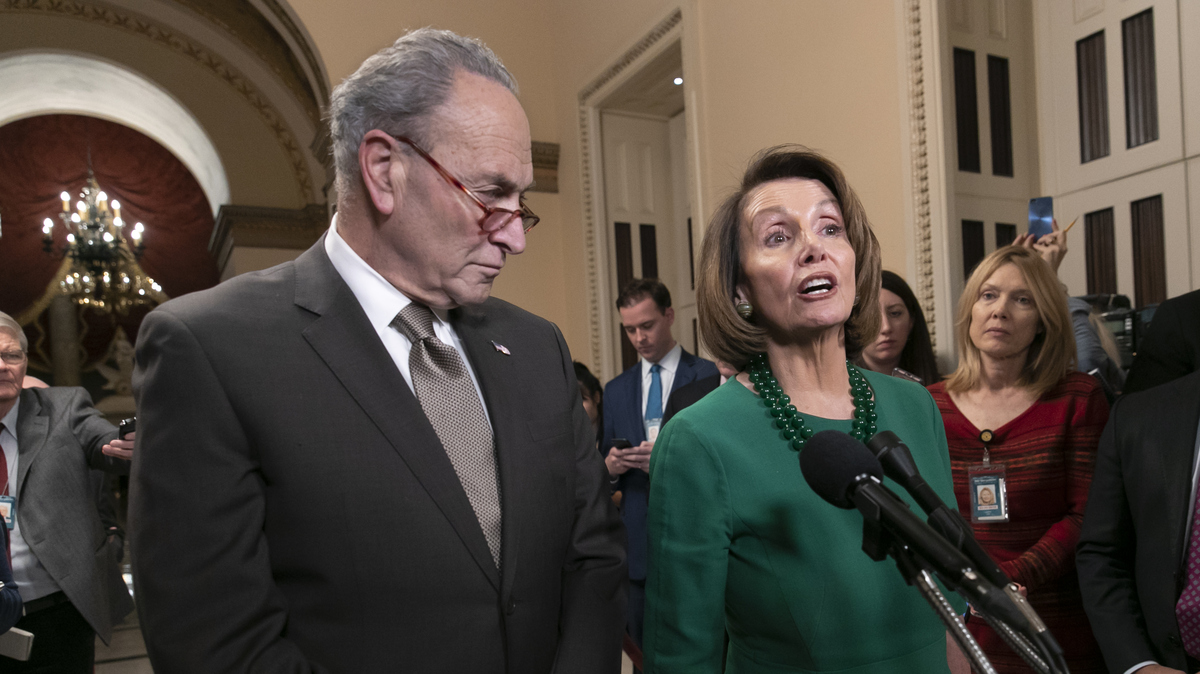 House Speaker-designate Nancy Pelosi, D-Calif., and Senate Minority Leader Chuck Schumer, D-N.Y., address reporters about the fight over funding a border wall before the partial government shutdown. Pelosi will lead House Democrats in voting on a bill to reopen the government when they take power in the House on Thursday.

The House of Representatives will vote on a funding bill to end the partial government shutdown on Thursday, the first day of the new Congress when Democrats will take control of the chamber and are expected to elect Rep. Nancy Pelosi, D-Calif., as speaker.

According to a Democratic leadership aide, the legislation will include the full-year appropriations for six of the seven outstanding funding bills and stop-gap funding until Feb. 8 for the Department of Homeland Security, which is where the fight over President Trump's demand for $5.7 billion in border wall funding is contained.

This is a Democratic proposal, and it is unclear whether it will be taken up by the Senate, where Republicans will expand their majority come Thursday, or if President Trump will support it. Speaker-designate Pelosi has previously stated that the House would take up a bill to reopen government as a first order of business. Senate Majority Leader Mitch McConnell, R-Ky., has said he will only put a bill on the floor if President Trump will support and sign it.

The Senate previously passed a bill to keep the government open without the president's wall funding, before Trump changed his mind and decided not to sign it. The outgoing Republican House majority passed a bill with Trump's wall funds that was not passed by the Senate, where Democratic votes are necessary for such legislation.

A proposal was floated on Sunday by Sen. Lindsey Graham, R-S.C., to trade wall funds for legislation addressing the Deferred Action for Childhood Arrivals program and Temporary Protected Status, granted to those from a country where it's deemed unsafe to return. The same Democratic aide said in response, "Unless the president puts a proposal on the table, there's nothing to discuss given how many times the president has changed his position."

Trump spent Monday morning taunting Democrats on Twitter, urging them to "come back from vacation now" as he remained at the White House.

I’m in the Oval Office. Democrats, come back from vacation now and give us the votes necessary for Border Security, including the Wall. You voted yes in 2006 and 2013. One more yes, but with me in office, I’ll get it built, and Fast!

The president was also on the defensive over comments his outgoing chief of staff John Kelly made over the weekend about the status of plans for a border wall.

"To be honest, it's not a wall," Kelly said in an exit interview with the Los Angeles Times. He added, "The president still says 'wall' — oftentimes frankly he'll say 'barrier' or 'fencing,' now he's tended toward steel slats. But we left a solid concrete wall early on in the administration, when we asked people what they needed and where they needed it."

In response, Trump tweeted, "An all concrete Wall was NEVER ABANDONED, as has been reported by the media."

On Dec. 21, however, the president tweeted out a drawing of a barrier made of steel slats, calling it "totally effective."

A design of our Steel Slat Barrier which is totally effective while at the same time beautiful! pic.twitter.com/sGltXh0cu9