Accessibility links
China To Explore Moon's Far Side With Its Lunar Lander Early in 2019, China hopes to land a rover — the first soft landing on the moon's far side. The mission is exploratory, and will lay groundwork for a trip by Chinese astronauts to the lunar surface. 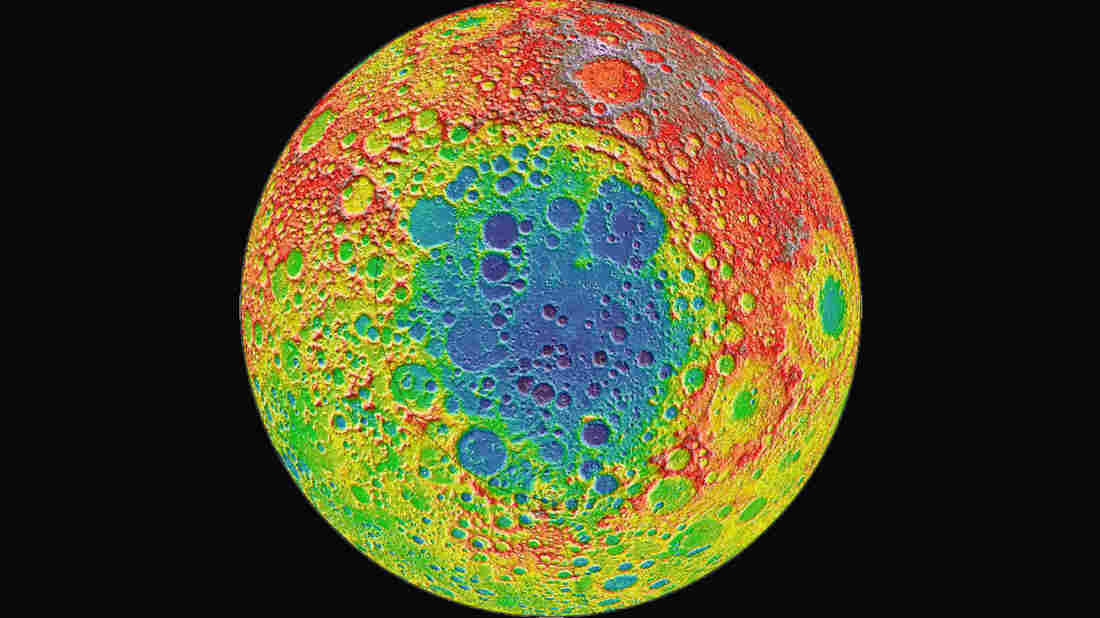 The Chinese lunar lander Chang'e 4 is headed to Aitken Basin, a large impact crater near the moon's south pole, pictured here in blue. The distance from the depths of Aitken Basin to the tops of the highest surrounding peaks is nearly twice the height of Mount Everest, according to NASA. NASA/Goddard hide caption 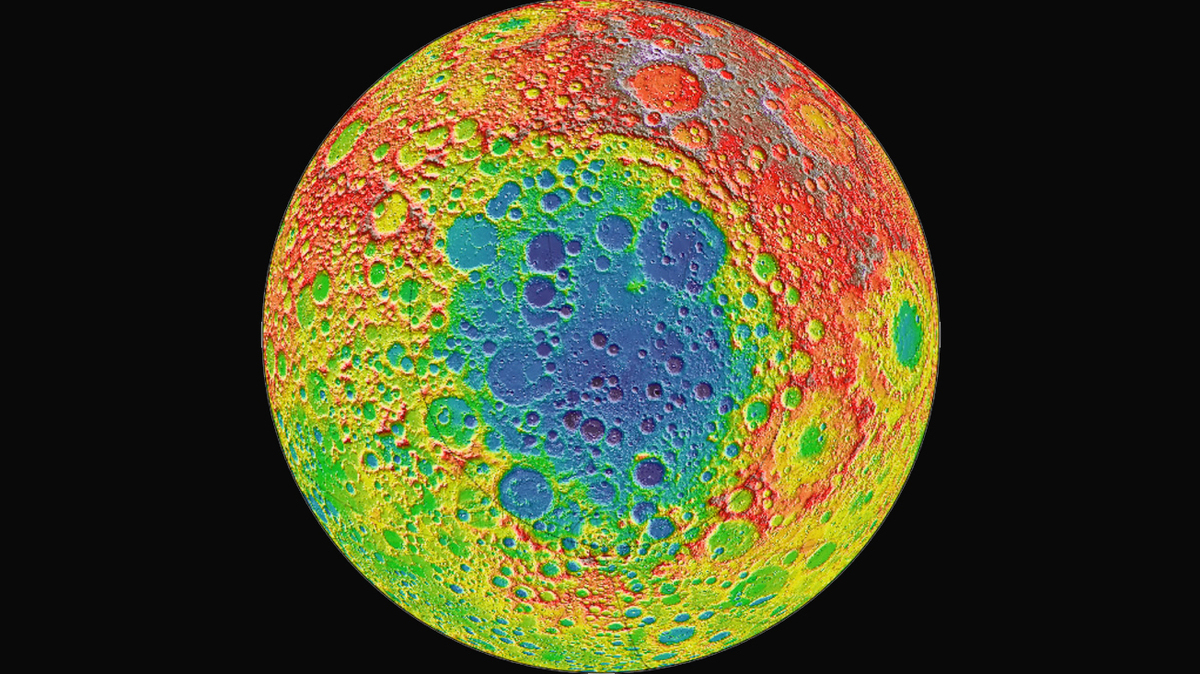 The Chinese lunar lander Chang'e 4 is headed to Aitken Basin, a large impact crater near the moon's south pole, pictured here in blue. The distance from the depths of Aitken Basin to the tops of the highest surrounding peaks is nearly twice the height of Mount Everest, according to NASA.

Sometime early in 2019, the Chinese civilian space program plans to land a six-wheeled rover on the moon's far side — the side we never see from Earth.

The Chinese haven't released the exact date the landing is to occur, but they have announced the location. The probe, known as Chang'e 4, is targeted for Aitkin Basin, a giant impact crater near the Moon's south pole.

In addition to a variety of cameras, the rover carries ground-penetrating radar that can peer beneath the lunar surface.

Although Chang'e 4's mission is largely scientific, it is also a key bit of preparation for sending Chinese astronauts to the lunar surface.

"Before Neil Armstrong set foot upon the moon, the United States sent 21 robotic missions to the moon to prepare the way," notes Jim Head, a planetary scientist with Brown University.

'First Man' Considers Glory, Grief And A Famous Walk On The Moon

"The robotic program is providing all the kinds of background that you would need for building space suits and things like that — like lunar rovers," Head says. "So they're building toward human exploration, for sure."

But beyond that, simply getting a chance, for the first time, to get a better sense of the moon's far side is exciting, says Briony Horgan, a planetary scientist at Purdue University.

Already, researchers know that the far and near sides are very different, she says.

"The far side is actually much more primitive — it contains really ancient crust that dates back to the very, very early solar system," Horgan says.

"There are rocks all over the far side that are over 4 billion years old," she adds. "We're really excited to see what those look like, up close."

So, why have all landing probes to date traveled only to the near side?

"Mostly because it's a lot easier to communicate with," Horgan explains. "We can actually see the near side, and so we get direct radio communication with the entire near side of the moon."

Horgan says the Chinese have solved the communication problem by adding a third component to their mission. The first component is a lander. The lander carries the second component, a mobile rover.

Though it might be handy if U.S. lunar missions could also use the relay satellite, that's not likely to happen. Official collaboration between NASA and the Chinese space program is essentially prohibited by U.S. law. There also are restrictions on exporting space technology from the U.S. to China.

But Brown University's Jim Head says even with the restrictions, there is communication among scientists from both countries. He argues that's a good thing.

"Why would we send a spacecraft to the same location to do exactly the same thing, when we can optimize the amount of scientific return for the United States and for other countries by collaborating as best we can?" Head asks.

And while China may not be as forthcoming as NASA about what their civilian space program is up to, Head says they're not completely opaque, either.

"If you talk to the right people, they're not holding things back," he says. "There are security issues there from their point of view as well as ours. But, nonetheless, they've been very forthcoming with their civilian space program."

The United States has its own lunar ambitions. The Trump administration has asked NASA to focus on returning humans to the moon. It's just possible there will already be Chinese astronauts there when they arrive.