Accessibility links
Homelessness Strains Compassion For Some Los Angeles Residents About 50,000 homeless people live in and around L.A., according to the latest count by the Los Angeles Homeless Services Authority. The vast majority of them live unsheltered on the streets. 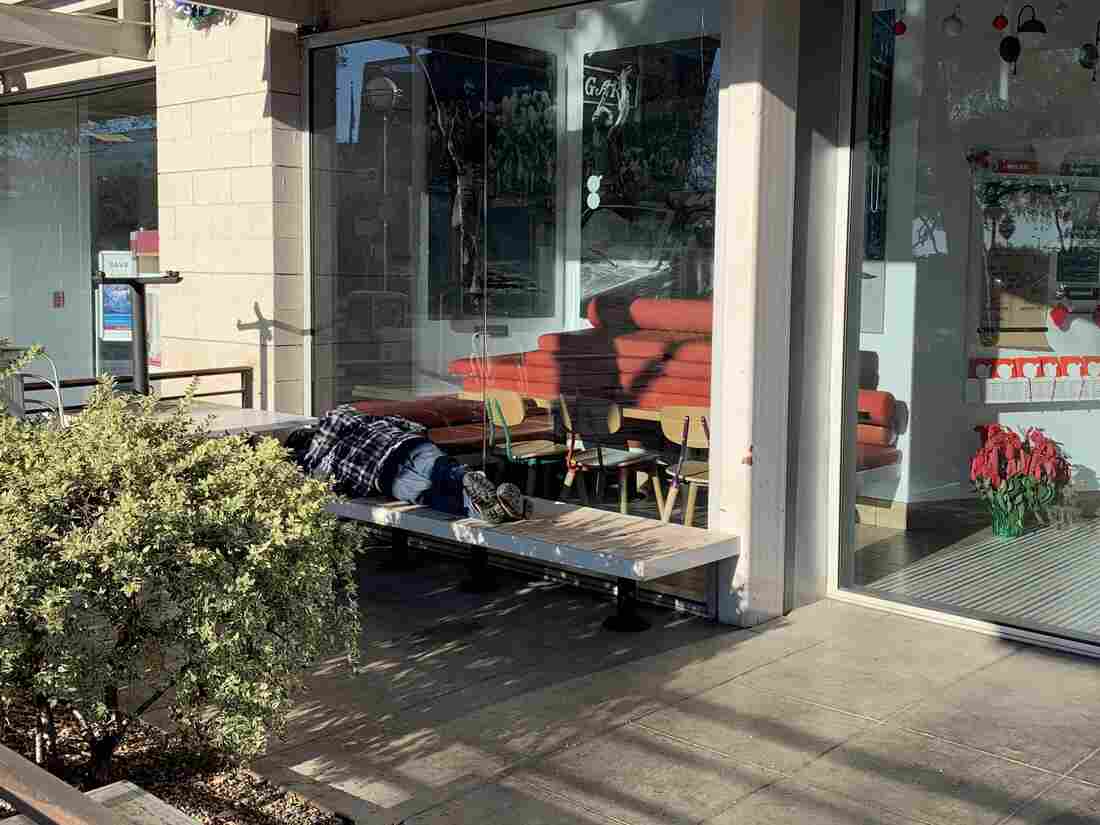 Despite big investments in new housing services, tens of thousands of men and women still sleep on the streets in and around L.A., like this man in West Hollywood. Anna Scott/KCRW hide caption 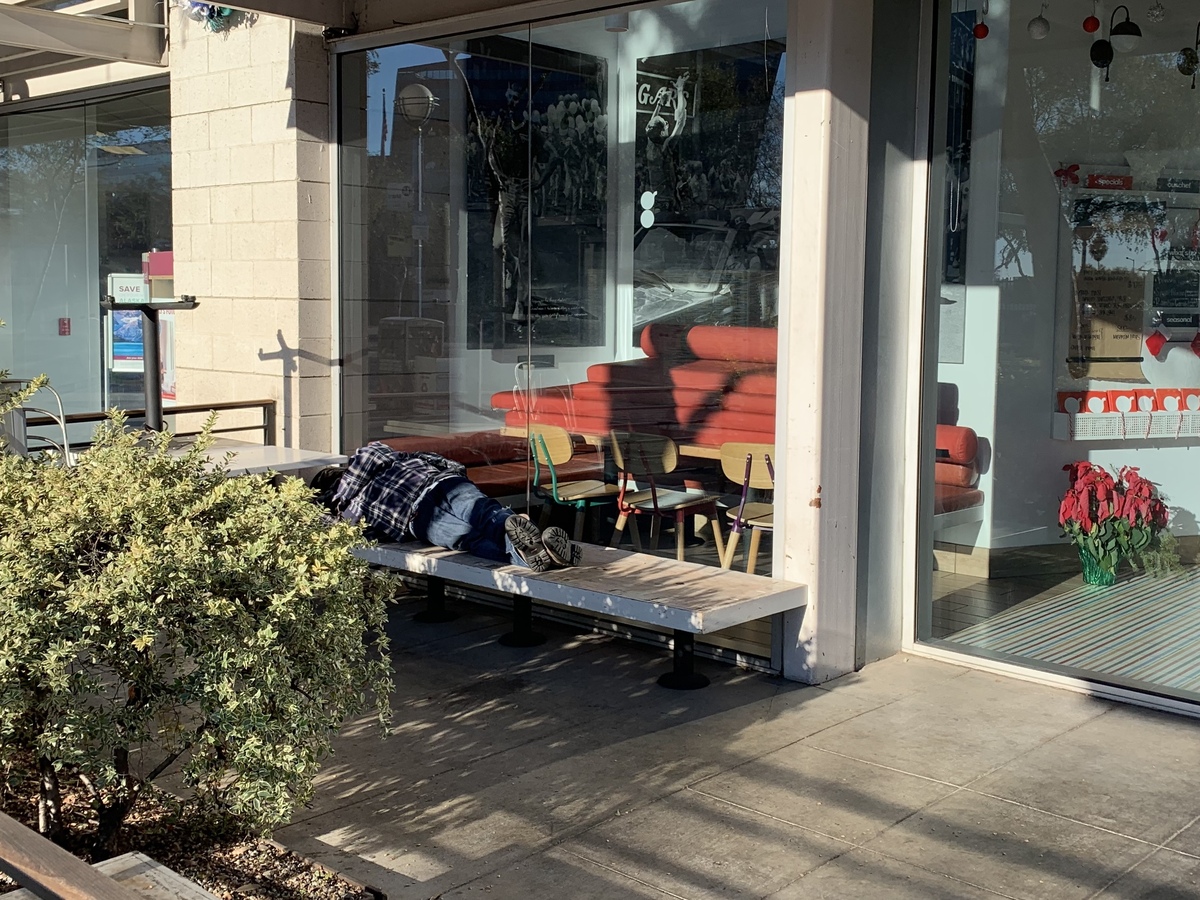 Despite big investments in new housing services, tens of thousands of men and women still sleep on the streets in and around L.A., like this man in West Hollywood.

Approximately 50,000 people are experiencing homelessness in and around L.A., according to the latest count by the Los Angeles Homeless Services Authority. The vast majority of them live unsheltered on the streets. According to city officials and nonprofit leaders, there's a growing frustration among L.A. residents who — despite the city's big new investments in housing and services — continue to confront L.A.'s homeless crisis in their daily lives.

For the past few years, a man has been living on and off in the carport at Shannon Peace's building near West Hollywood, Calif. For a while, he had an elaborate encampment right in front of her parking spot.

"He had a laptop. He had a bicycle," she says. "And he used our storage bins."

Still, Peace figured he wasn't hurting anyone, and for a while she thought of the man as an unofficial neighbor. That is, until one day she came downstairs to get into her car, said her usual greeting and was met with a blank stare instead of the usual friendly 'hello.'

It's a fear issue. When it comes to your own feelings of safety, suddenly it influences the way you view the entire issue.

"His eyes were glazed over and he was muttering to himself," Peace says. "That was the point at which I went 'OK, this is really a safety issue. This is somebody who potentially has mental illness — potentially has a substance abuse problem.'"

She called police, but the man still returns to the carport periodically. Peace says the experience has hardened her a little bit towards homeless people in general.

That feeling is uncomfortable for her to admit. As a kid growing up in L.A., Peace would beg her mother to give money to panhandlers. Now, she says, she's less likely to interact with men and women on the streets than she used to be.

"There's definitely a growing tension and people [are] frustrated by the challenges that we're facing here in this city," says L.A. City Councilwoman Monica Rodriguez. "It's a challenge."

Rodriguez recently asked California state lawmakers to extend hate crime protections to people experiencing homelessness after a few violent incidents against homeless people. Those are rare cases, but Rodriguez says she worries generally about anger towards L.A.'s homeless community. Not only for humanitarian reasons, but because homeless housing and services often depend on public dollars and public support.

"We have [solutions]," Rodriguez says, but it requires citizens "to have the compassion and the empathy to work with us to help address this problem."

Two years ago, L.A. voters overwhelmingly passed Measure HHH, a city bond to fund homeless housing. In 2017, they passed a county-wide sales tax increase called Measure H, to fund various homeless services. Despite all this new money flowing to a number of projects, tens of thousands of men and women still sleep on the streets. The situation has led to increasing impatience among some voters.

In some parts of the region, anger over encampments and a potentially dangerous element amongst L.A.'s homeless has resulted in explosive town halls, hateful social media posts and even one citizen patrol to monitor encampments. More often, however, the housed and unhoused live in peaceful but uneasy coexistence.

On a recent afternoon on L.A.'s westside, about a half dozen homeless men spread their belongings across picnic tables and on the lawn of a busy park. Nearby, children swarmed a playground. One of the men, 59-year-old Filipe Calderon, says he knows people judge him.

"They see you pushing the cart, they look at you funny," he says. He also says he's as unhappy with his situation as any onlooker could be. "I haven't showered in about a month," he says. "So I don't feel good."

Calderon used to have a carpentry business but lost it to drinking. His alcoholism cost him his family too, driving away his wife and two adult children. Although he still drinks, he'd like to quit this year. "I'm gonna get back on my feet again," he says. Nonetheless, he points out a beer cooler he keeps in a shopping cart hidden behind some plants.

Calderon's story is long and complicated, but on the surface it's the kind of story that can strain some residents' empathy. It's easy to feel for the financial victim or the person who ended up homeless after a health crisis. It's more difficult to identify with the person who appears somehow complicit in his or her own circumstances, or appears to be doing something wrong.

Yet this mental sorting between who is "deserving" and "undeserving" is one of the biggest hurdles to fostering empathy around homelessness, says Ann English, who works for the nonprofit Corporation for Supportive Housing.

English directs a program training formerly homeless men and women to share their stories in public. One of the program's goals is put individual faces on L.A.'s massive homeless crisis. English says she tells community members to think of a couple of things when faced with a person on the street who appears intoxicated or disruptive.

"First, that's not the entire story for that person," English says. "Second, everyone that you see is a drop in the bucket of all the people that are experiencing homelessness. Just recognizing the assumptions that you're making without knowing the facts affects what we're able to do about the situation."

To Help The Homeless, Some In LA Are Giving Them A Place To Stay

Not everyone sees an empathy gap among L.A. residents. L.A. Mayor Eric Garcetti says the city's getting more volunteers around homeless causes than ever before. Residents "still need a lot of help in their neighborhoods," he says, "but they're feeling what they voted for starting to come to fruition."

He also says the city is housing more people than ever. Yet it's not enough to keep up with all the people falling into homelessness, which is why the situation on the streets looks a lot like it did. Garcetti says he's fine with L.A. residents feeling impatient.

"I think we should remain frustrated," he says, "but we should also remain committed." He also emphasizes the city's progress. "Because a very complex problem didn't go away overnight," he says, "doesn't mean that things aren't happening."