Accessibility links
Despite Huge Backlogs, The Government Shutdown Halts Most Immigration Court Hearings Hundreds of thousands await hearings in the already-congested system. Those delays could help some cases but hurt many others. 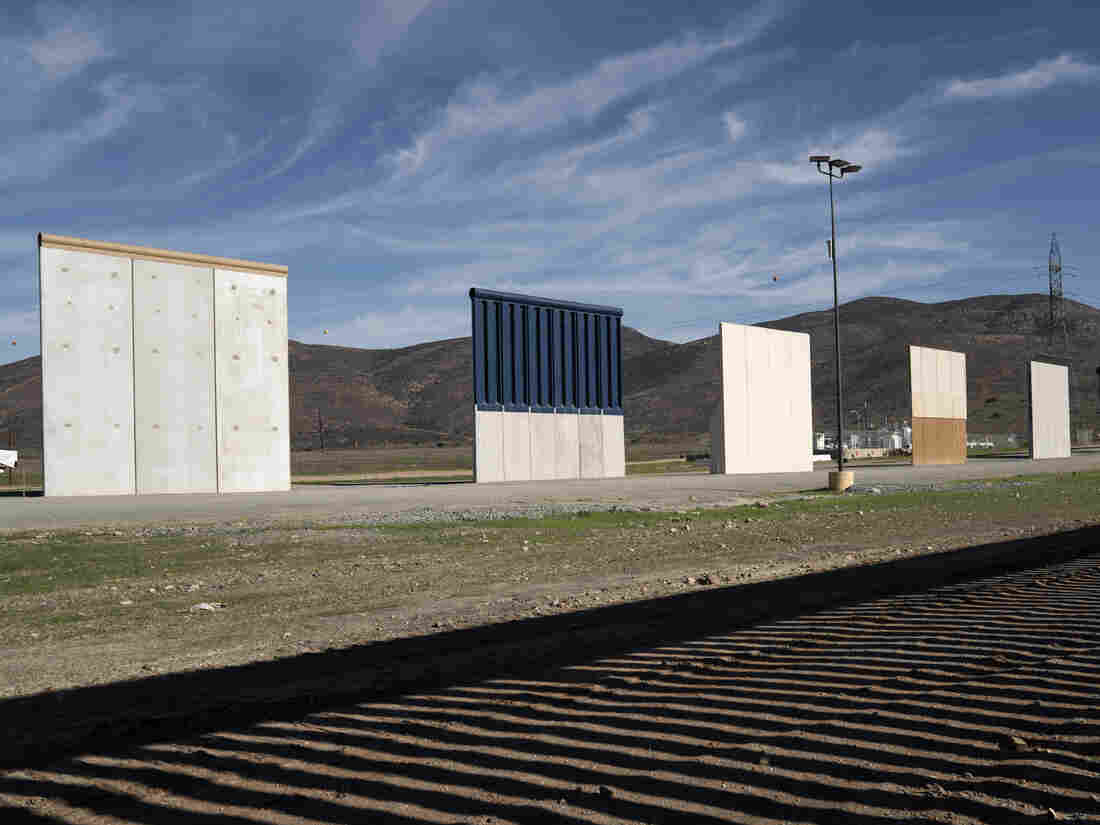 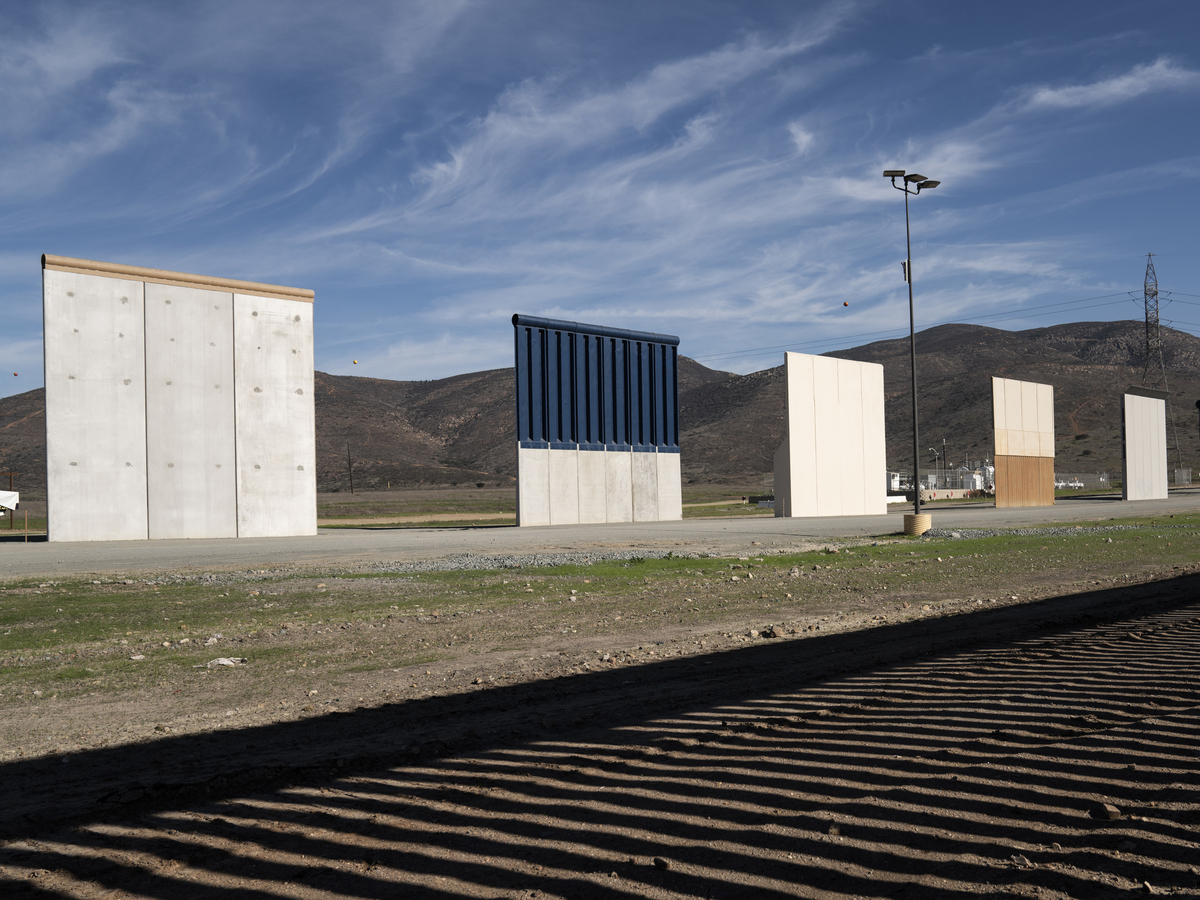 Border wall prototypes stand in San Diego near the U.S.-Mexico border. The federal government remains partially closed in a protracted standoff over President Trump's demand for money to build the wall.

The federal government shutdown — caused in part by disagreements over immigration policy — is delaying immigration court hearings across the country.

Court appointments scheduled during the shutdown will be "reset" to new dates in the future, per a notice from the Department of Justice dated Dec. 26. The only exception are courts operating in immigration detention centers, where federal immigration authorities hold immigrants pending deportation. However, court staff may not be paid while continuing to hear those cases.

In addition, some emergency motions in nondetained cases can still be filed to the judges that are working during the shutdown.

Shutting down the country's massive system of immigration courts will gum up an already congested judicial process, immigration judges and attorneys say.

We don't have time to adequately consider the cases that we do have, much less have to spend extra time to think about what we're going to do with all the cases that have to be rescheduled.

In federal immigration court, judges often hear cases in quick succession, a process some have compared to hearing "death penalty cases heard in traffic court settings." A swift deportation may become a death sentence if a person is forced to return to a violent homeland.

Each day of the shutdown means thousands of cases will be pushed back indefinitely, according to Ashley Tabaddor, president of the National Association of Immigration Judges. Tabaddor said she currently has around 2,000 cases before her court in Los Angeles, while some judges have upwards of 4,000.

"We don't have time to adequately consider the cases that we do have, much less have to spend extra time to think about what we're going to do with all the cases that have to be rescheduled," she said.

Calls to the U.S. Department of Justice asking for more information about the rescheduling went unreturned, and emails to department press officers returned auto replies saying they were furloughed.

In recent years, the backlog of immigration court cases in the U.S. has swelled, as processing times lagged. The average case making its way through immigration courts today has been there for 718 days, or almost two years, according to the Transactional Records Access Clearinghouse at Syracuse University, which compiles statistics on U.S. immigration. That's up from 430 days a decade ago.

Some administration officials and immigration hard-liners have criticized long processing times as contributing to practices that allow immigrants without strong cases to stay in the U.S. for years, rather than be swiftly deported.

To try to move cases through more quickly, the Trump administration imposed quotas on immigration judges in 2018, requiring them to clear 700 cases a year or get docked points on their performance evaluations. However, under former Attorney General Jeff Sessions, the Department of Justice also changed policy so that more than 300,000 closed immigration cases could be reactivated. If reopened, those claims would swell the backlog of cases from upwards of an estimated 768,000 cases to more than 1 million.

Both policies drew criticism from judges such as Tabaddor, who called the quotas "indefensible" and a sign that immigration court should be made independent of the executive branch.

"It's quite ironic to shut down the immigration courts because of the differences on immigration," she said, referring to President Trump's desire for funding additional barriers at U.S.-Mexico border.

It's hard to generalize how delays generated by the government shutdown could change the outcomes of the cases themselves.

"Rescheduling a case can be devastating for some individuals. For others, it may actually be a blessing in disguise," said Maurice Goldman, an immigration attorney in Tucson, Ariz.

For example, pushing back a hearing could mean an immigrant who qualifies for status now may not in the future if immigration policies are restricted. Or, if an immigrant doesn't have a strong claim for status, a delay means more time in the U.S. and maybe even qualifying for another form of immigration status in the interim.

"Every immigration attorney who is honest will tell you that sometimes getting cases delayed is the best thing for the case," said Philadelphia immigration attorney Matthew Archambeault. In either instance, unexpected delays can be confusing for clients because they have nothing to do with the facts of their cases and because the shutdown could end at any time.

"The thing I tell them is, something's going on, their hearings may not go forward, but to prepare like they're going to go forward," said Archambeault. "I don't get into it too much."