Accessibility links
Nancy Pelosi Is House Speaker Once Again As Democrats Take Control A significant power shift begins in Washington with Democrats taking control of the House of Representatives. The incoming speaker plans votes on bills to reopen the government and new rules. 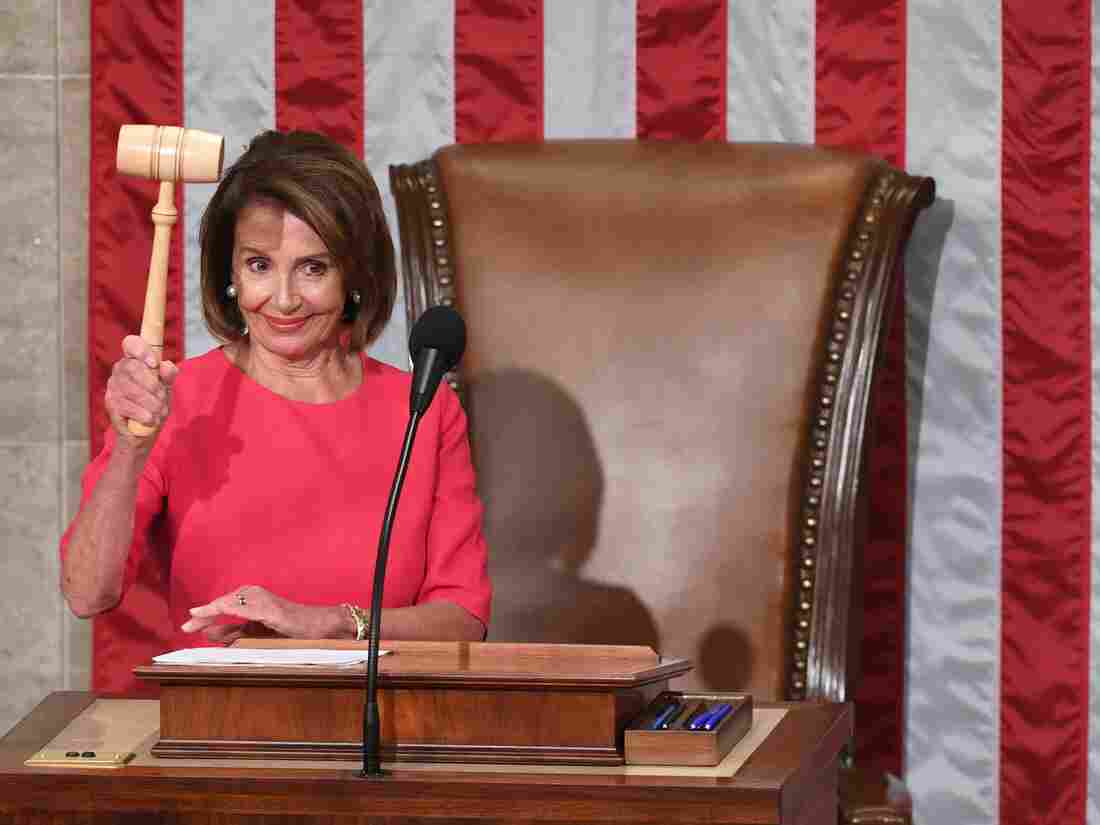 Speaker of the House Nancy Pelosi, D-Calif., holds the gavel after being sworn in on Thursday. Saul Loeb/AFP/Getty Images hide caption 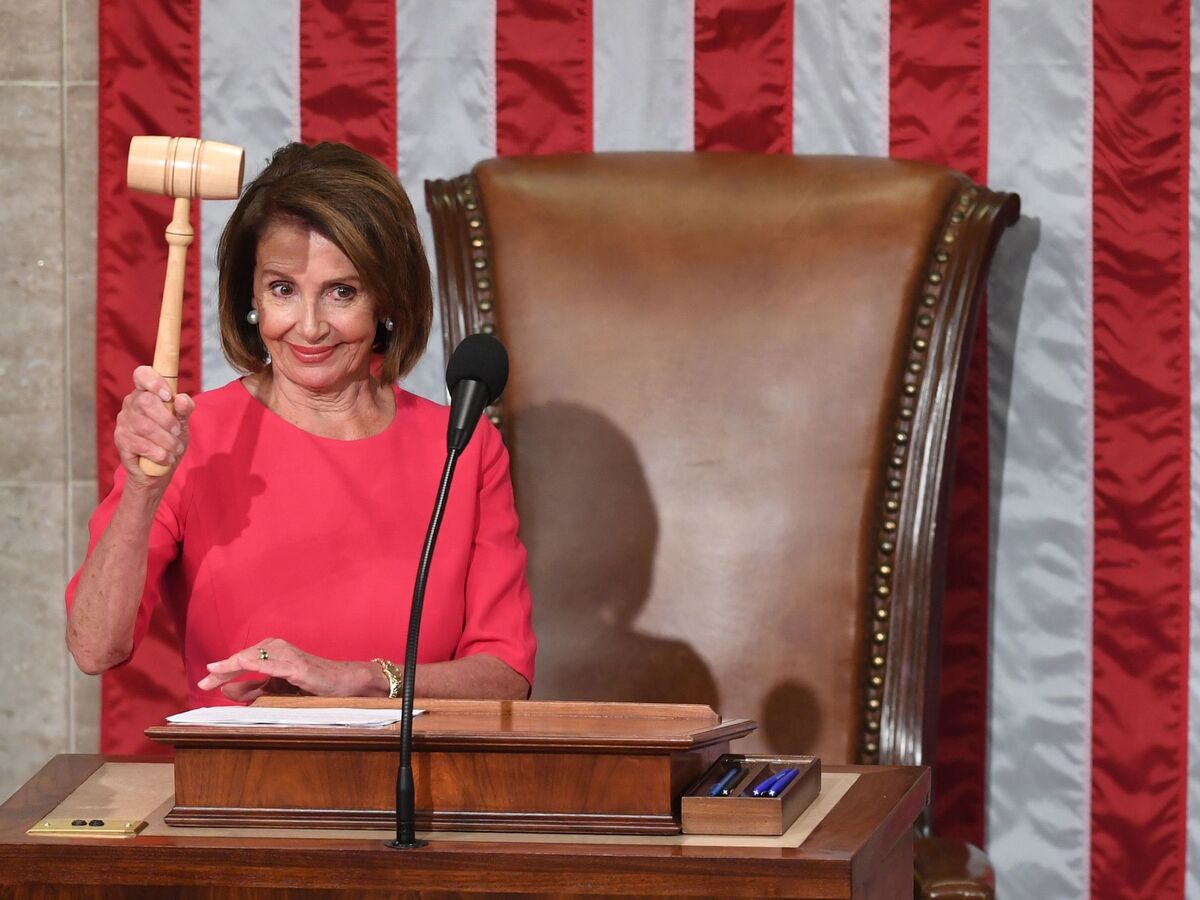 Speaker of the House Nancy Pelosi, D-Calif., holds the gavel after being sworn in on Thursday.

Nancy Pelosi is again speaker of the House, as Democrats retook control of the chamber for the first time in eight years, bringing divided government back to Washington.

The first woman to hold the position, Pelosi is now the first person to reclaim the speaker's gavel in more than six decades.

The California Democrat was elected with 220 votes over California Republican Kevin McCarthy, the new minority leader.

After accepting the speaker's gavel from McCarthy, Pelosi said the nation is at "an historic moment." And while not mentioning President Trump by name, Pelosi said voters spoke last November, calling on "the beauty of our Constitution, our system of checks and balances that protects our democracy."

Pelosi said she was "particularly proud" to return as speaker now, in the 100th year of women having the right to vote, presiding over more than 100 women in Congress, the highest number in history.

With the start of the new Congress, nearly 100 newly elected lawmakers are coming to the House and Senate — including those representing the 40 seats the Democrats picked up to sweep their party back into power in the House.

They will be led by Pelosi, who, with Thursday's vote, returns to the job of speaker after eight years leading Democrats in the minority. Pelosi made the history books in 2007 when she became the first woman elected speaker, and on Thursday, she became the first person to return to that job since Sam Rayburn in 1955.

Pelosi took the gavel in the midst of a nearly two-week partial government shutdown over President Trump's demand for more than $5 billion to build a wall on the Southwest border with Mexico. Democrats plan to launch their new majority with votes on a package of bills to end the shutdown and reform the rules of the House.

The first day of the new Congress is always a festive occasion, and Thursday's opening session was no different. Lawmakers brought along spouses and their children, many of whom surrounded Pelosi as she was sworn in as speaker.

She said the House will "debate and advance good ideas no matter where they come from" and noted that the spending bill that is to get a vote late on Thursday had been supported by Senate Republicans. 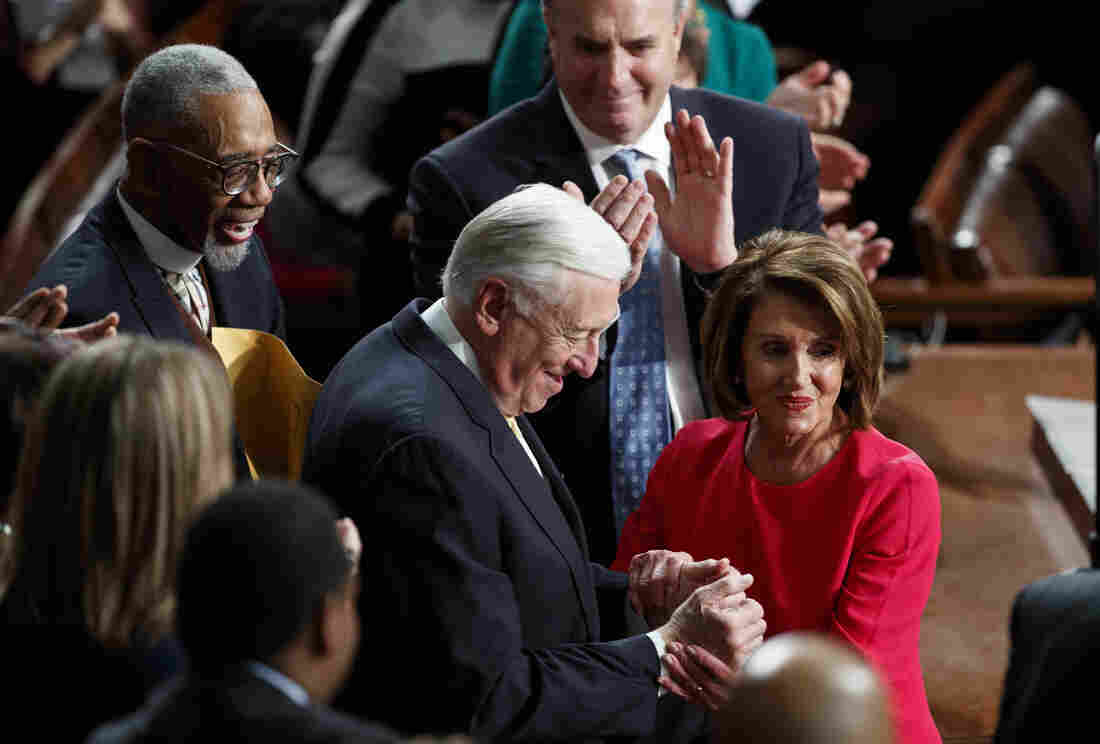 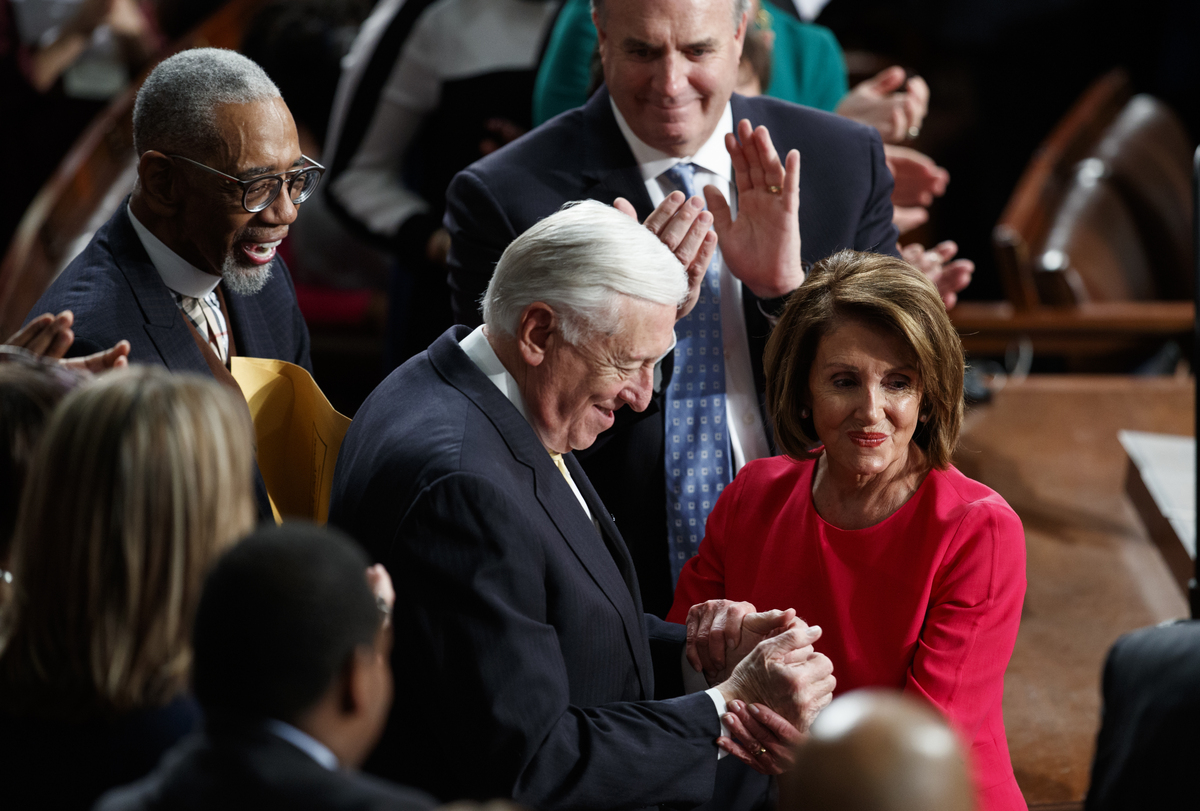 New Speaker of the House Nancy Pelosi, D-Calif., and House Majority Leader Steny Hoyer, D-Md., are applauded at the Capitol on Thursday as Democrats officially regain control of the chamber.

She outlined an ambitious agenda for the next two years, saying the House will address income disparity and be "a champion of the middle class," protect Medicare, Medicaid and Social Security, as well as people with pre-existing medical conditions and face what she called "the existential threat of our time, the climate crisis."

She also pledged the House will act on guns by passing "bipartisan background check legislation," will pass the Equality Act to end discrimination against LGBTQ Americans, and will protect those she called "our patriotic, courageous DREAMers," young immigrants who arrived in the U.S. illegally as children.

Pelosi promised the 116th Congress will be "transparent, bipartisan and unifying," saying that "the floor of this House must be America's Town Hall: where the people will see our debates, and where their voices will be heard and affect our decisions."

The vote to reopen government is expected to sail through with a majority of Democrats supporting six bipartisan spending bills that fund most of the closed agencies through September and a short-term extension of current funding for the Department of Homeland Security. Pelosi said the legislation gives Republicans a chance to reopen government and to keep working on border security, which is funded through DHS.

That party unity may begin to crack when it came to the new House rules. A small group of progressives, including California Rep. Ro Khanna and incoming New York Rep. Alexandria Ocasio-Cortez, said they'll vote against the rules. They object to a provision that would require Congress to offset new spending through a provision called pay as you go, or PAYGO.

I will be voting NO on the Rules package with #PayGo. It is terrible economics. The austerians were wrong about the Great Recession and Great Depression. At some point, politicians need to learn from mistakes and read economic history. @paulkrugman @StephanieKelton @RBReich https://t.co/avimV0SU4t

Tomorrow I will also vote No on the rules package, which is trying to slip in #PAYGO.

We shouldn’t hinder ourselves from the start. https://t.co/WW3UaBs7vh

"Chairman McGovern and House Leadership have committed to us that PAYGO will not be an impediment to advancing key progressive priorities in the 116th Congress," the co-chairs said in a statement. "With the assurances that PAYGO can be waived, we do plan to vote for the House rules package and proceed with legislation to fix the statute."

The fight over rules will be the first of likely many intraparty squabbles among Democrats as they try to satisfy the demands of an ideologically and demographically diverse coalition.

Other rules changes included in the package could significantly affect how the House operates. One revives a rule that would automatically raise the nation's borrowing authority once a budget is approved — lowering the threat of partisan confrontations about the debt ceiling. Another changes the process for attempts to force out a sitting House speaker. And Democrats also plan to vow lawmakers will get 72 hours to review any legislation before it gets a floor vote.