Accessibility links
Elizabeth Warren, Bernie Sanders And The Rest Of Democrats Face New 2020 Tests The next presidential election doesn't happen for 22 months, but the campaign is now already underway — with plenty of potential candidates making news this week. 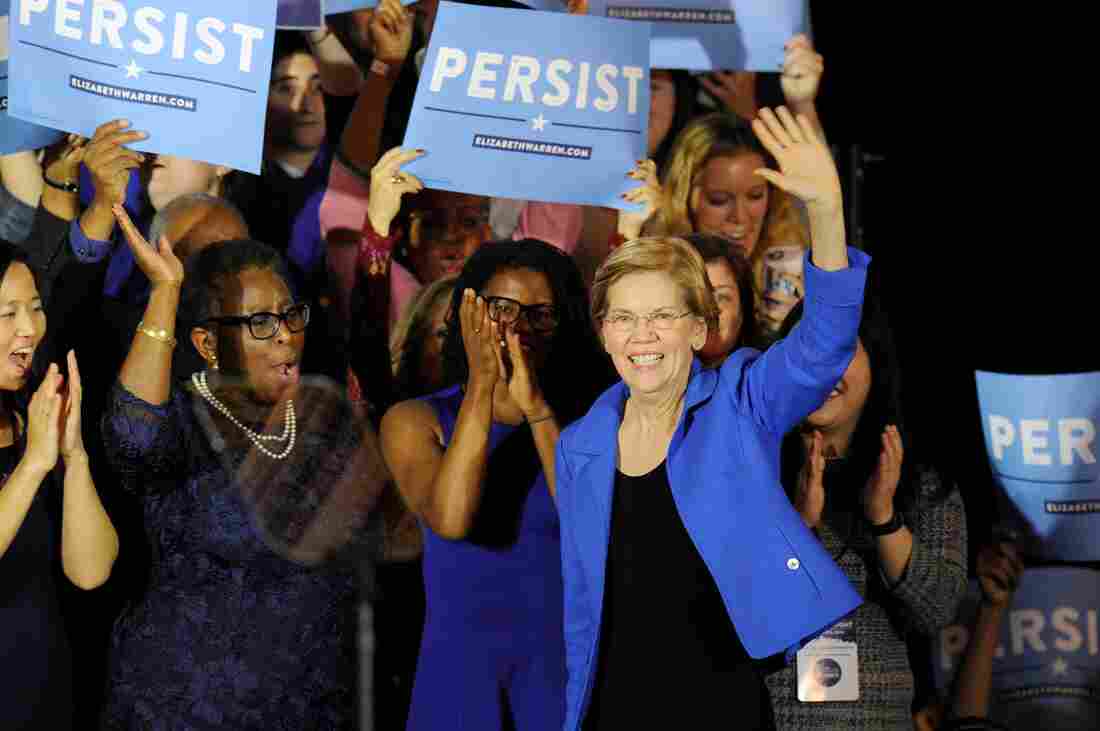 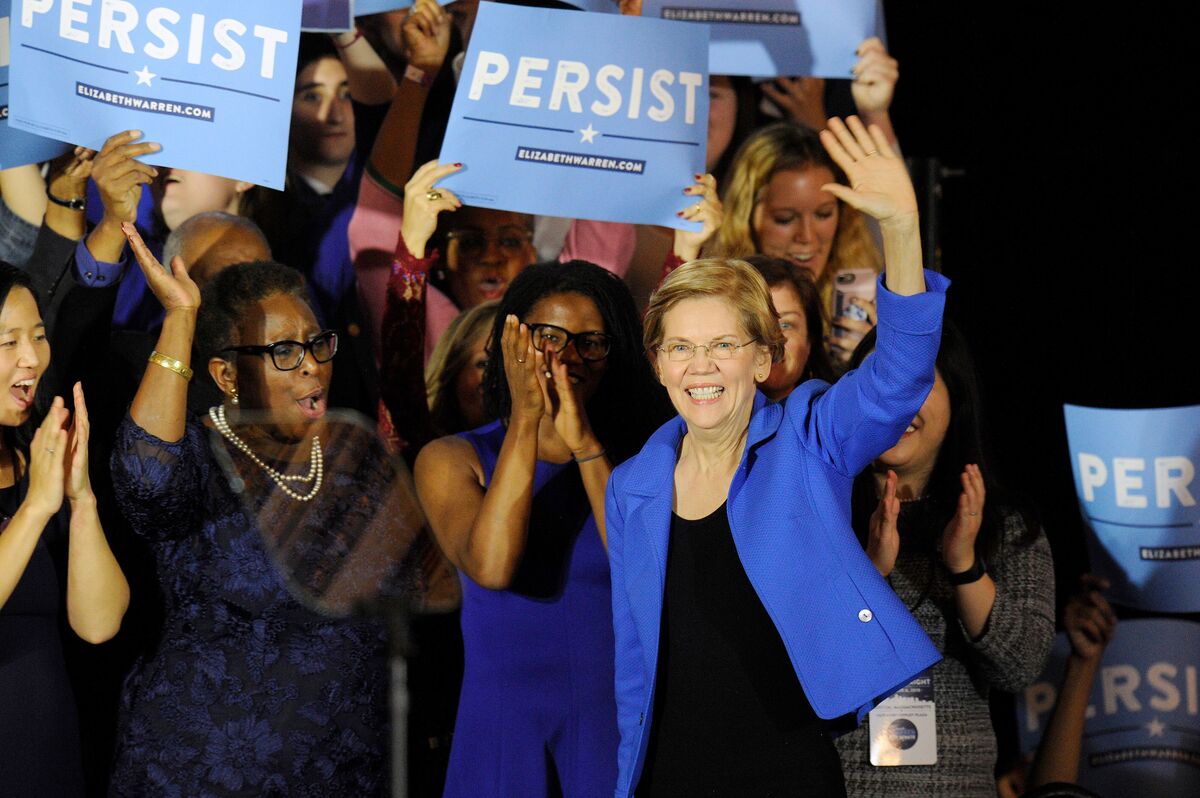 Sen. Elizabeth Warren of Massachusetts addresses the audience on Election Day in November 2018.

This is how elections work in this country — the presidential campaign cycle begins the year before the presidential election, and when it's a potentially large field, it pushes further and further back.

And that is what's happening. Elizabeth Warren, the progressive senator from Massachusetts, got a lot of attention for her New Year's Eve video announcement that she had launched an exploratory bid for president.

She is far from the only one making moves (or getting scrutiny — see Sanders, Bernie). Five candidates have already officially announced at least exploratory bids — Warren; former San Antonio Mayor Julián Castro, who is set to formally announce his bid on Jan. 12; ex-Rep. John Delaney of Maryland, who announced he was running in 2017; Andrew Yang, an entrepreneur; and Richard Ojeda, who ran for and lost a congressional seat in West Virginia. 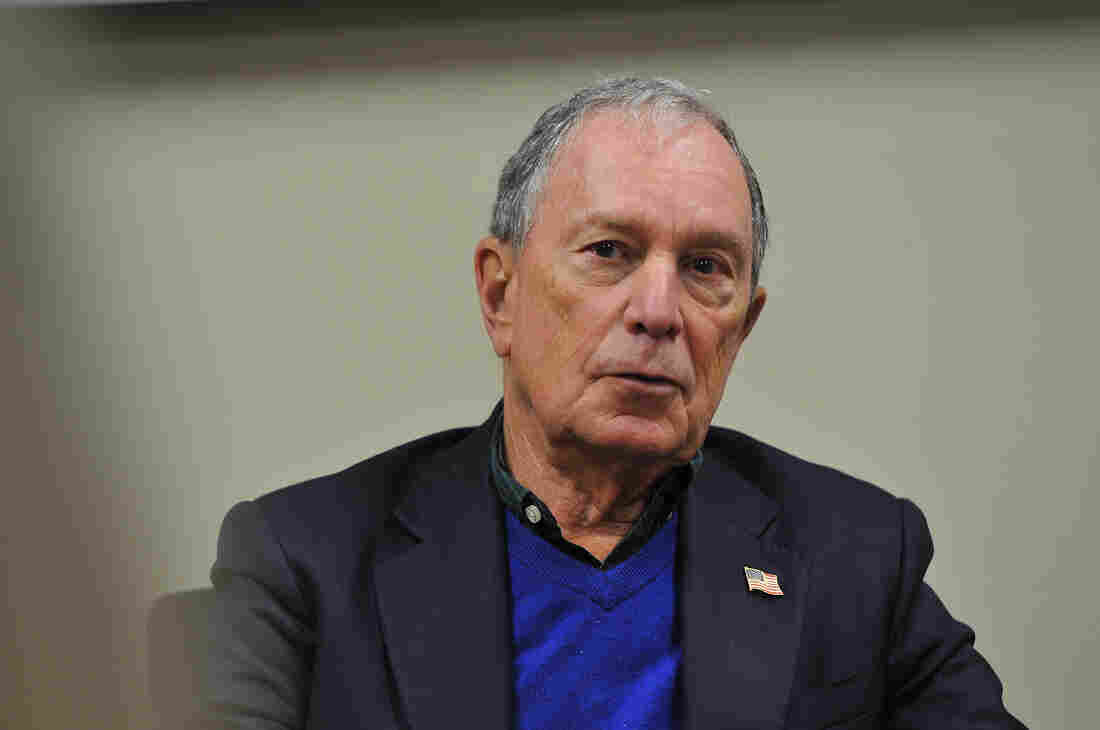 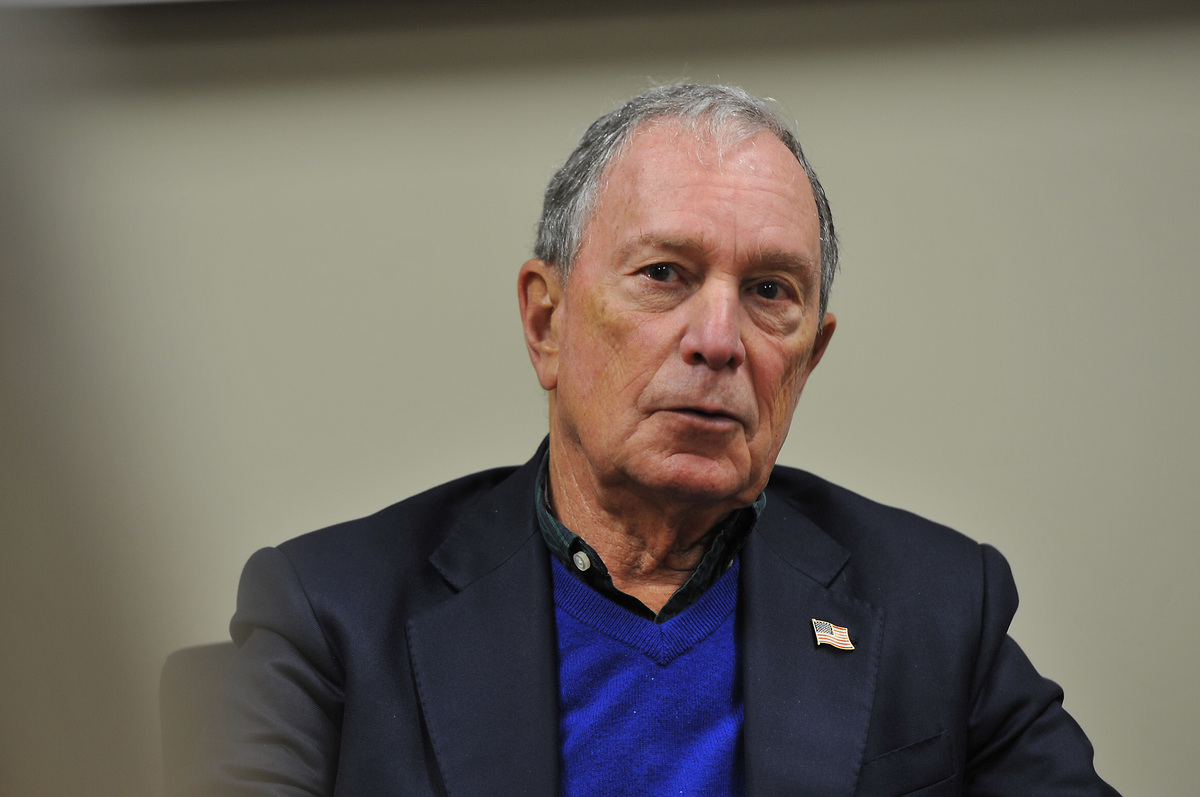 Lots of other candidates are expected to announce shortly, from sitting senators to current and former governors and mayors, as well as even possibly a billionaire or two.

And that has Warren riled up.

Sure, President Trump is a billionaire, and an anti-billionaire message is fundamental to Warren's and Sanders' platforms of economic populism, but it's also an implicit shot at former New York City Mayor Mike Bloomberg and Tom Steyer, the hedge fund manager turned climate change activist turned "Need to Impeach" Trump guy. 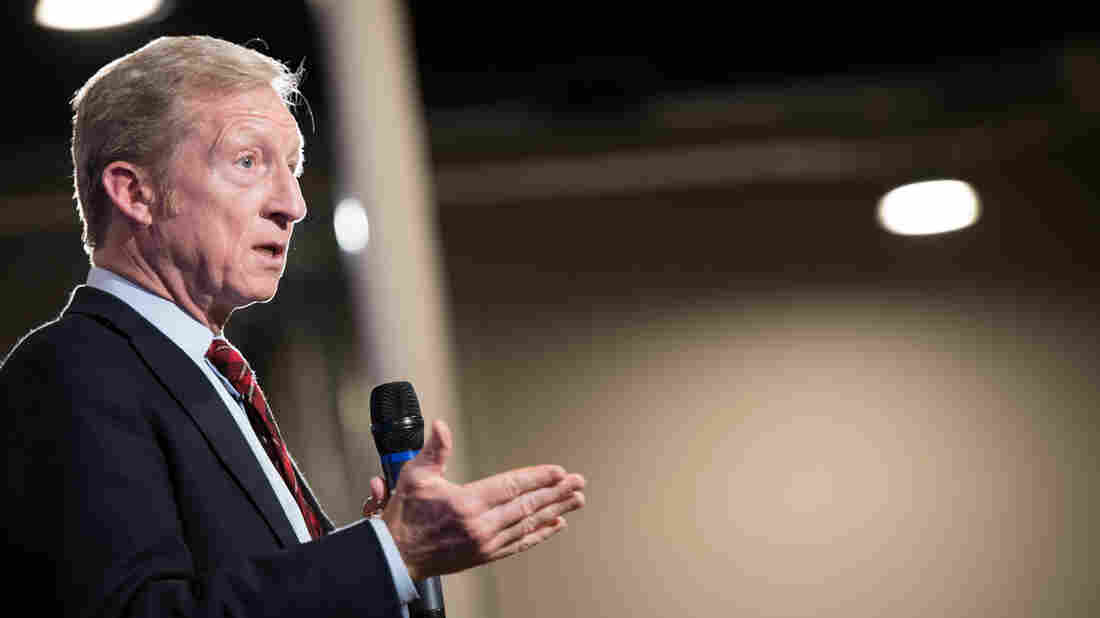 Billionaire Tom Steyer hosts a town hall discussion in South Carolina, an early-primary state. Steyer, who has built an anti-Trump reputation, is weighing a bid for the presidency. Sean Rayford/Getty Images hide caption 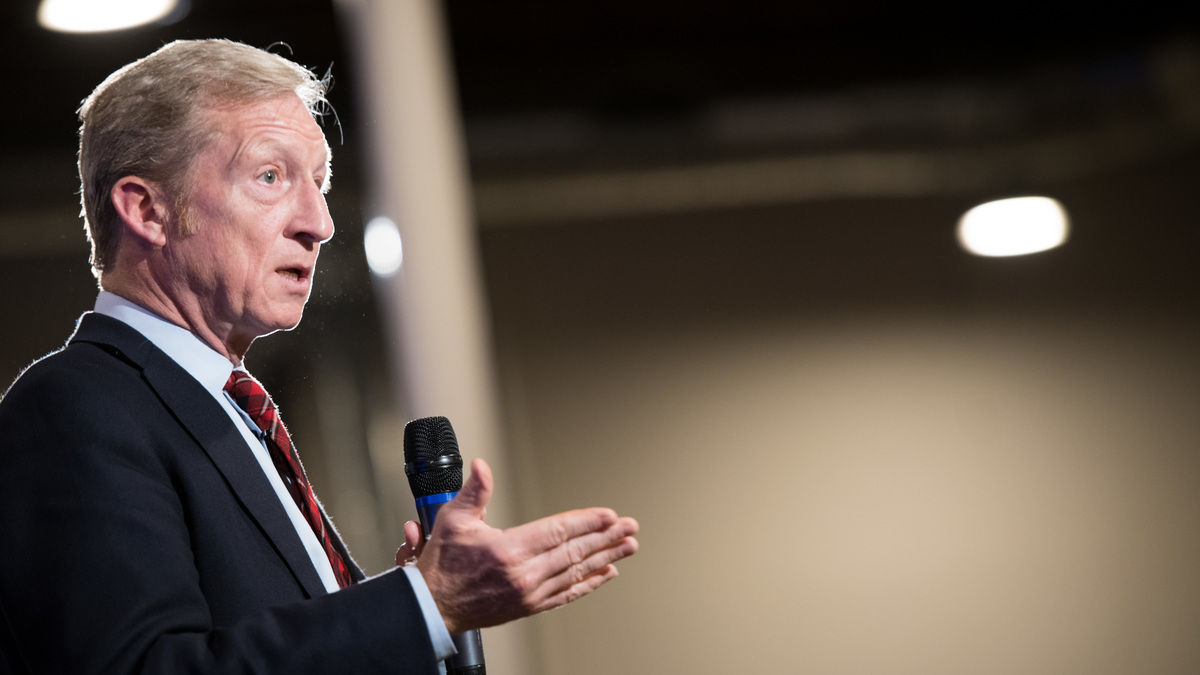 Billionaire Tom Steyer hosts a town hall discussion in South Carolina, an early-primary state. Steyer, who has built an anti-Trump reputation, is weighing a bid for the presidency.

Bloomberg got a big platform Sunday on NBC's Meet the Press, where he was able to speak about climate change, an issue that would be fundamental in his possible run for president. He says he is going to decide by February whether he is running.

Steyer, meanwhile, is headed to Iowa, Nevada and New Hampshire early this year as part of his "5 Rights" tour. Warren is headed to Iowa this weekend, and she is showing that if either gets in, the water will be cold.

GOP superPAC America Rising is already pointing out that Warren's comments could also be interpreted as a shot at any other Democratic candidate, like Sens. Cory Booker, Kamala Harris and Kirsten Gillibrand, potentially open to accepting help from superPACs set up by well-funded donors.

(By the way, when a superPAC is sending out opposition research trying to fuel infighting in the opposite party, that smells like campaign season.) 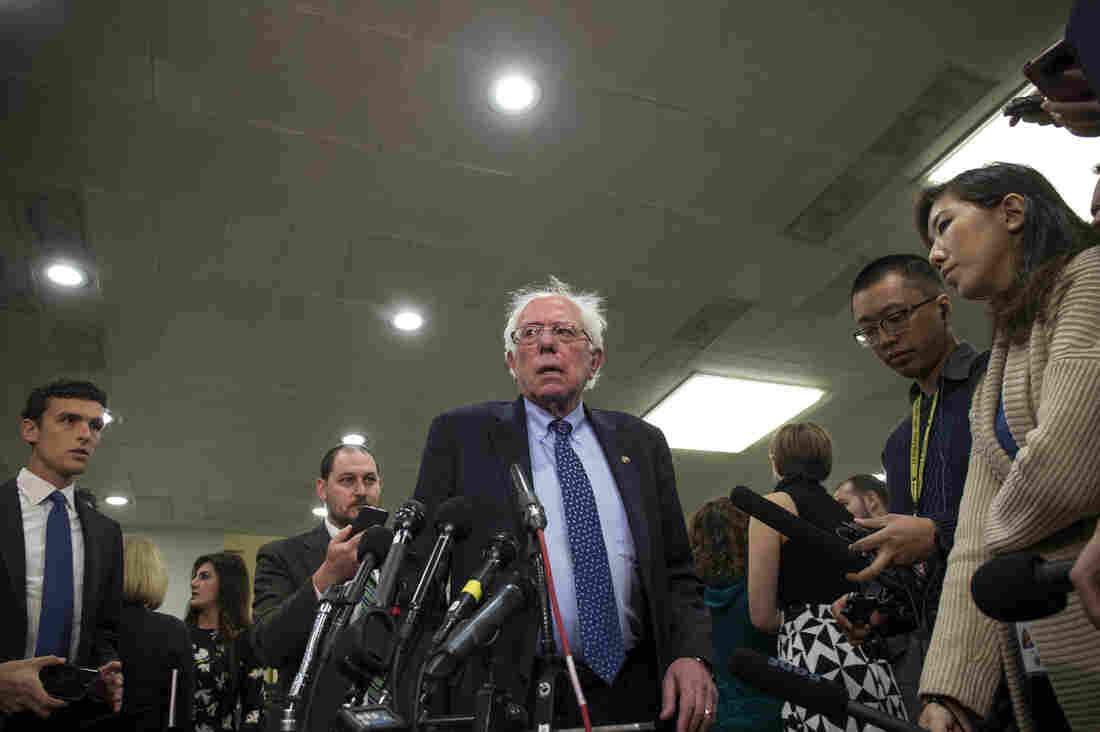 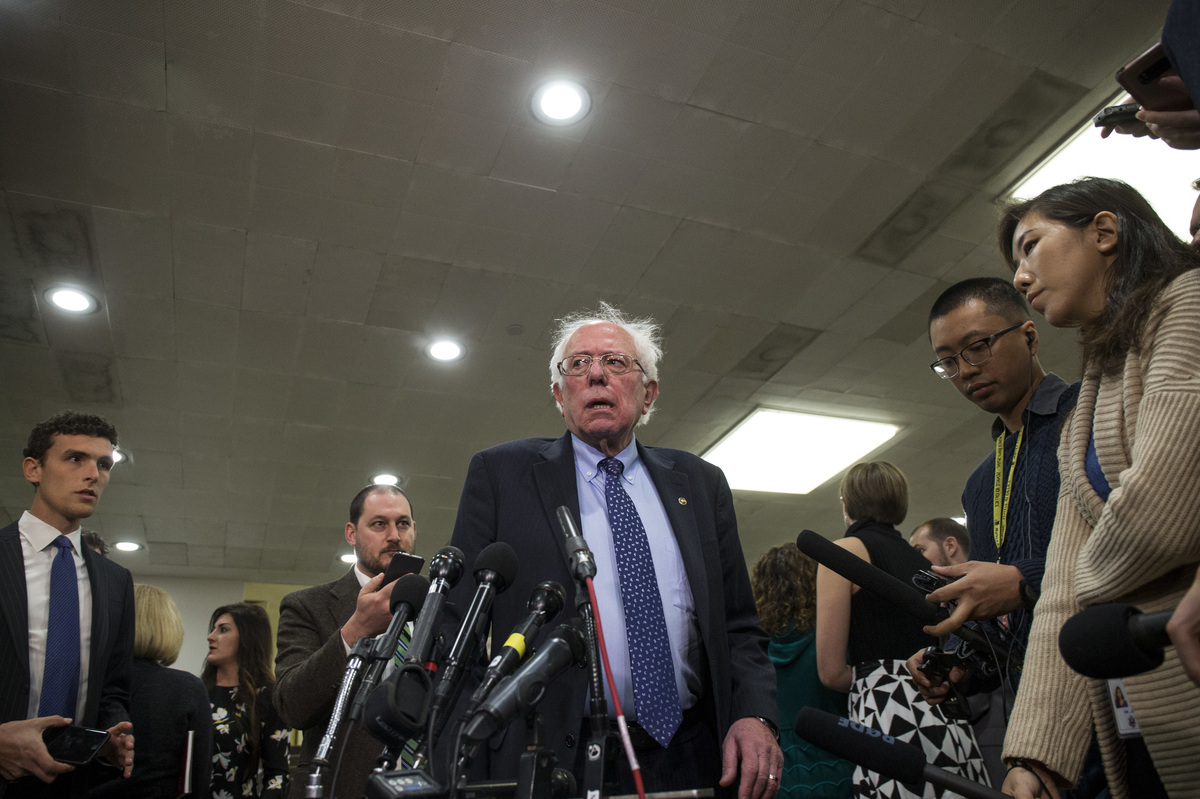 Sen. Bernie Sanders of Vermont speaks to the press in November. Sanders hasn't officially decided on another presidential run — yet.

In 2016, Sanders benefited from outsider challenger status to Hillary Clinton. Yes, the deck was stacked against him with superdelegates, and, yes, the Democratic National Committee seemed to be limiting his exposure with the number of debates and when they were put on.

But he received only the kind of scrutiny allotted to an upstart, maybe-he-can-actually-win challenger. Sure, his plans were analyzed for their price tag, but stories like this didn't really appear. The New York Times reported allegations of sexual harassment against 2016 campaign aides on Wednesday, including from former Sanders Latino outreach strategist Giulianna Di Lauro:

"Accounts like Ms. Di Lauro's — describing episodes of sexual harassment and demeaning treatment as well as pay disparity in Mr. Sanders's 2016 campaign — have circulated in recent weeks in emails, online comments and private discussions among former supporters. Now, as the Vermont senator tries to build support for a second run at the White House, his perceived failure to address this issue has damaged his progressive bona fides, delegates and nearly a dozen former state and national staff members said in interviews over the last month."

Sanders was asked about the allegations Wednesday night on CNN. He apologized "to any woman who felt she was not treated appropriately" and pledged "if I run, we will do better the next time."

Asked whether he was aware of these kinds of allegations during his campaign, Sanders said, "I was a little bit busy running around the country trying to make the case."

In a year with a potentially very crowded field, and Sanders trying to maintain his coalition that is inevitably going to be picked through by lots of new candidates vying for the progressive mantle (See Warren, Elizabeth), stories and responses like this aren't helpful.

(Note: Sanders isn't the only one who has had to deal with this. It was also revealed last month that Harris, who was California attorney general, also had a senior staffer at the California Department of Justice reach a $400,000 harassment financial settlement.)

Other odds and ends