Accessibility links
RNC Members Want To Block A Primary Challenge To Trump, But The Rules May Stop Them Some GOP activists are eager to stop party rivals from taking on — and possibly weakening — President Trump. But it appears to be too late to make changes for 2020. 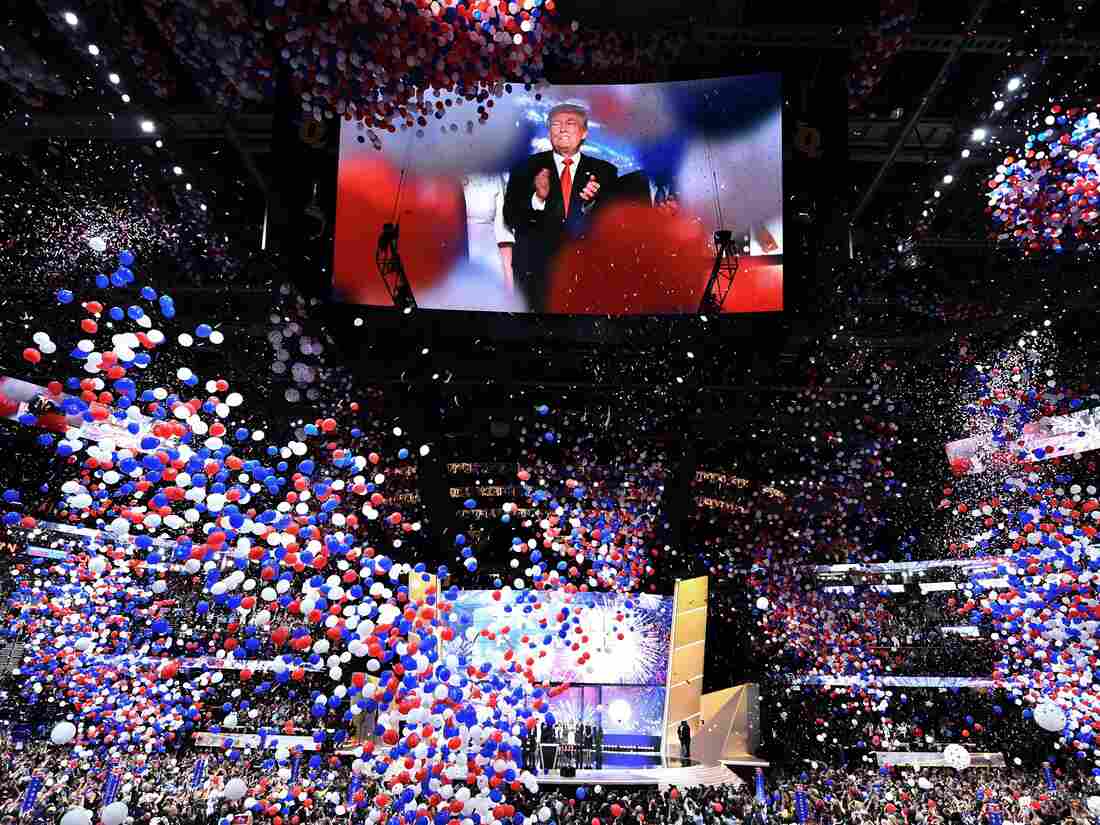 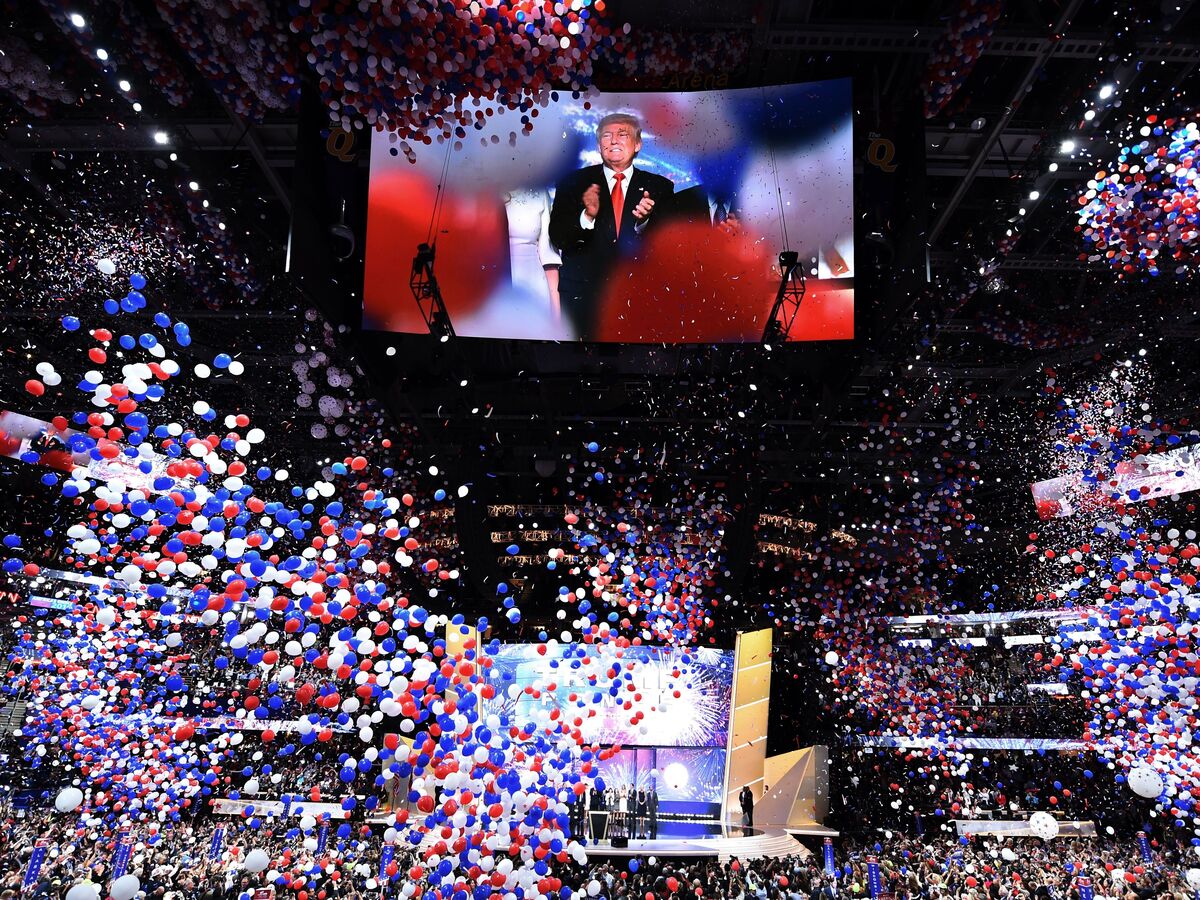 Donald Trump accepts the 2016 GOP presidential nomination at the Republican National Convention in Cleveland. Some party activists want to prevent a primary challenge to Trump in 2020.

Some members of the Republican National Committee and grassroots Republicans are backing an effort to block potential primary challengers to President Trump, even though party insiders are insisting it is too late to change the rules for the 2020 campaign.

The push to rally GOP support around the president early comes as freshman Republican Sen. Mitt Romney of Utah published a Washington Post op-ed arguing that on issues of character, "the president has not risen to the mantle of the office." The 2012 GOP nominee also said he would not run himself in 2020 and declined to endorse Trump, in an interview with CNN.

Responding to the Romney op-ed, Republican National Committee member Jevon Williams called for a change in RNC rules to prevent a costly primary challenge, which he deemed a "fantasy" that would weaken Trump's re-election prospects.

"I am asking for your support to take the unprecedented step of amending the rules to close loopholes in the re-nomination campaign," wrote Williams in a letter to fellow RNC members, first reported by The Washington Examiner and obtained by NPR.

There is an open question about whether current RNC rules allow money to be spent to support Trump's re-election if there is a contested primary for the GOP presidential nomination. This question has helped motivate those like Williams who hope to block a Trump challenger.

"The party can't spend money or resources if there is a contested primary," a longtime RNC insider argued. "They stupidly didn't amend the rules in a substantive manner from 2016, which was an open cycle."

Trump enjoys enormous support among GOP voters, hovering around 90 percent approval in polls, and his endorsements during 2018 GOP primaries proved very powerful. That makes any primary challenge at this point seem like a very long shot, but a handful of figures in the party are seen as possible opponents.

Heading into a re-election campaign, Trump is facing political trouble with a new Democratic House that is preparing dozens of investigations into the president and his administration, alongside special counsel Robert Mueller's probe into 2016 election interference.

Williams' proposal received strong grassroots support from some party members across the country.

"I wholeheartedly support Jevon's resolution. President Trump needs this expression of support from his party at this time," said Marti Halverson, the RNC's national committeewoman from Wyoming.

"Any primary attempt by [Ohio Gov. John] Kasich, [former Arizona Sen. Jeff] Flake or Romney is a fool's errand. I support any move by the RNC to support President Trump and secure his nomination as early as possible," said Guy Short, a six-time national delegate to Republican conventions and a veteran of the GOP's platform and rules committees.

The proposal to change the party's rules in order to block a Trump challenger is unlikely to succeed. Republican Party rules experts say that it's too late to change the rules for the 2020 presidential nomination process.

Morton Blackwell, who has served on the RNC for 30 years as a representative from Virginia, told Williams that it was not possible to block Trump primary challenges at this time.

In 2016, a tug of war broke out in the Republican convention rules committee, and a minority of voices in the party sought to block Trump from becoming the party's nominee at the convention in Cleveland. Two-and-a-half years later, the environment within the party is absolutely pro-Trump.

In some ways, the most notable opposition to William's rule change suggestion are those who think Trump's support is so profound that it is not necessary.

"Donald Trump will have no problem whatsoever winning a Republican primary — the base loves him ... anyone who tries to challenge him will be defeated soundly. From my standpoint, I'm not sure there's a need," said Joe Gruters, a Florida state senator and a front-runner to be the next Florida GOP chairman.

Shawn Steel, the RNC's national committeeman from California, said he didn't support Williams' effort to block Trump challengers because he feared there would be unintentional long-term consequences. But he did say that the RNC should unanimously support Trump all the same.