Accessibility links
Government Shutdown May Hamper Alaska's Lucrative Fishing Industry The shutdown has closed much of the National Marine Fisheries Service, which oversees Bering Sea fisheries off the Alaska coast. Industry workers don't know when boats will get needed authorizations. 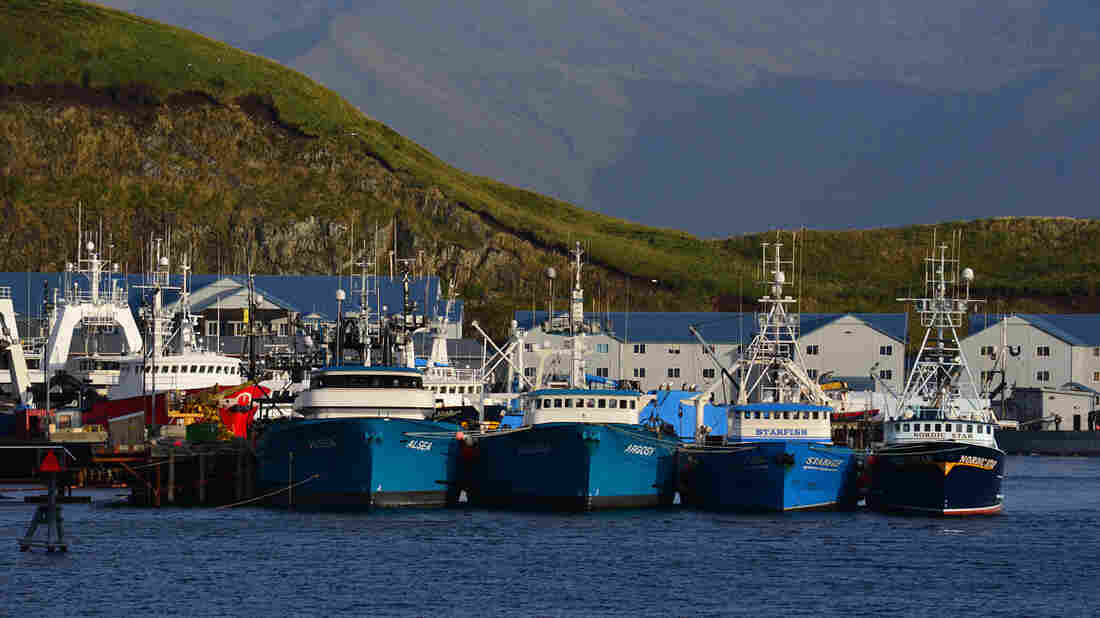 Fishing trawlers lined up in Dutch Harbor, in the Aleutian Islands, Alaska. The Alaska pollock fishery is worth about $750 million each year, and it's scheduled to open Jan. 20. But the heavily regulated industry is facing delays in inspections because of the shutdown. James Brooks/Flickr hide caption 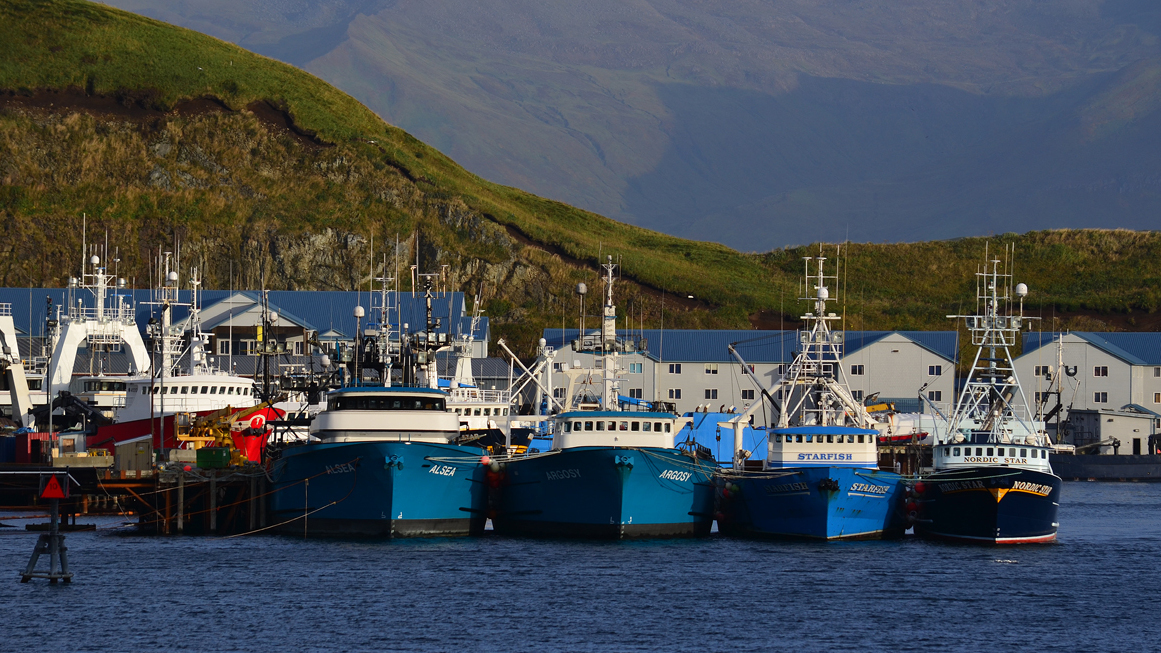 Fishing trawlers lined up in Dutch Harbor, in the Aleutian Islands, Alaska. The Alaska pollock fishery is worth about $750 million each year, and it's scheduled to open Jan. 20. But the heavily regulated industry is facing delays in inspections because of the shutdown.

The partial federal government shutdown is casting uncertainty over the major fishing industry based in the Bering Sea, which has an annual catch valued at more than $1 billion.

January marks the opening of a number of major fisheries in Alaska, including the 3 billion pounds of pollock that will be processed into fish sticks and McDonald's Filet-O-Fish sandwiches. And while the openings are set to go forward as scheduled, some of the boats and one entire fishing fleet are still missing federal permits and inspections needed before they can leave the docks.

The shutdown has closed down much of the National Marine Fisheries Service, which oversees the Bering Sea fisheries. People working in the industry say they're not sure if or when boats will be able to get the needed authorizations.

[V]essels that have not been certified yet will not be certified until the government opens up again.

"My understanding is the vessels that have not been certified yet will not be certified until the government opens up again," said Haukur Johannesson, whose company, Marel, provides scales that weigh fish to the huge factory vessels that work in the Bering Sea. "And if they don't get certified, they cannot go fishing."

Many of the Bering Sea fishing boats, however, are huge factory trawlers owned by sophisticated, Seattle-based companies, with lobbyists who know how to navigate the world of Congress and federal agencies. For example, officials at Romanzof Fishing Co. initially feared the shutdown would thwart one of their boats from taking a Jan. 1 trip to catch crab, since fisheries service employees were unavailable for a required inspection.

But by Thursday, the inspection had gone ahead and the company was back out fishing, according to Doug Wells, who works in government affairs for Romanzof.

The companies that will start fishing for pollock Jan. 20, meanwhile, can lease their fishing quotas between different boats if some vessels are sidelined by the shutdown, says Jim Gilmore, a spokesman for a pollock industry trade group. Nonetheless, he says, his group's 15 boats each have crews of more than 100 onboard that are already prepared for the trip from Seattle to the Aleutian Islands. Companies have stocked food and fuel.

The cost of uncertainty

"I think the fish will get caught one way or another," Gilmore says. But, he adds: "It's dealing with the practicalities of taking a $60 million fishing vessel with a crew of 130 people and taking it up to a very remote location and trying to make all that come together in a cost-effective way."

The potential for shutdown-related effects on the Bering Sea fisheries stems from their tight regulation by the federal government.

The Alaska-based spokesperson for the fisheries service, Julie Speegle, is not in the office during the shutdown, according to an outgoing message on her voicemail.

The agency's law enforcement office is still working and could cite companies that try to fish without required authorizations, according to an email from Sitka-based enforcement agent Al Duncan. But other activities like scale inspections aren't taking place, he wrote.

These people are in purgatory; they're in limbo.

But, she adds, the fisheries service is not holding "debriefings" for observers when they return from a fishing trip, which are required before those observers can go on their next trips. Hansen says that delay has sidelined five of her employees.

"I've got a group of people that are now stuck," she says. "These people are in purgatory; they're in limbo. They're just sitting and waiting until they can get on with their lives."

Another shutdown-related problem is threatening to derail an entire fleet of large factory boats that catch groundfish like mackerel and yellowfin sole, in a season that also opens Jan. 20.

The five companies and 19 boats in the fleet were planning to fish cooperatively this year. But they need a permit to do so, and as of last week, the fisheries service was unable to issue it, according to an internal email sent by Chris Woodley, the director of the fleet's trade group.

Woodley says the permit still hadn't been issued as of Thursday. The wholesale value of his fleet's catch is roughly $350 million a year.