Accessibility links
Congresswoman Tlaib Inspires Palestinian-Americans With A Dress And A Hashtag Michigan Democratic Rep. Rashida Tlaib wore a thobe to her swearing-in ceremony, and women responded on social media with photographs of themselves wearing the elaborate embroidered Palestinian dress.

Congresswoman Tlaib Inspires Palestinian-Americans With A Dress And A Hashtag

Congresswoman Tlaib Inspires Palestinian-Americans With A Dress And A Hashtag 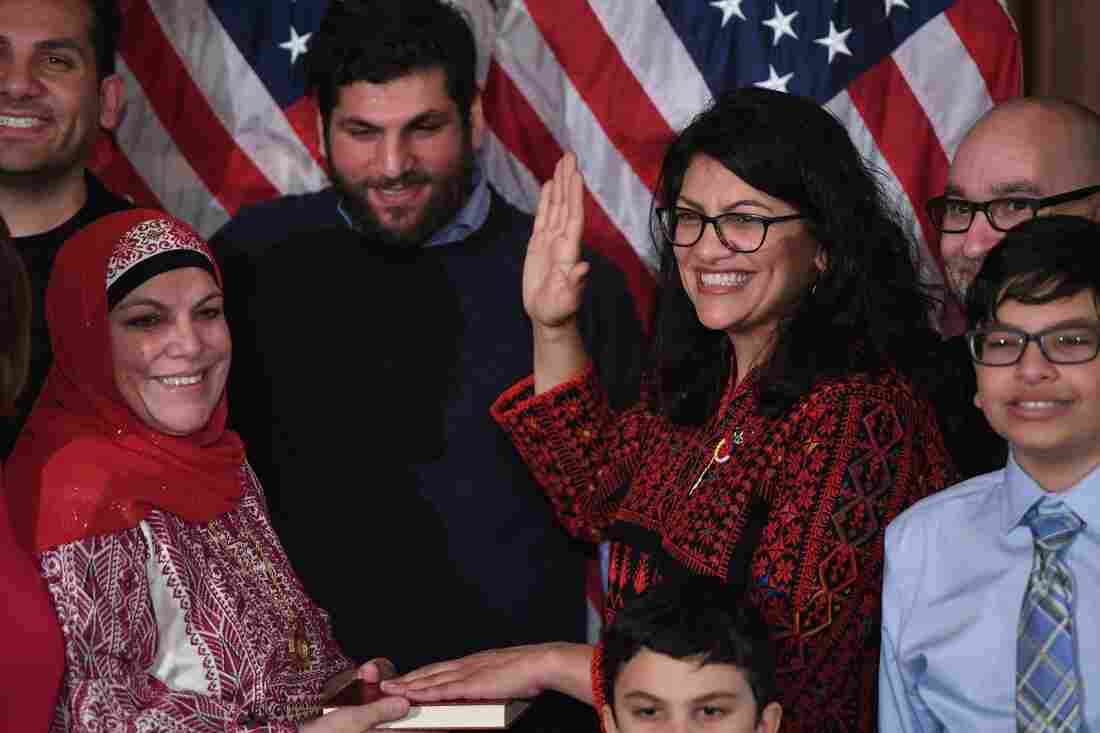 Rep. Rashida Tlaib (center), wearing a traditional Palestinian robe, takes the oath of office on a Quran at the start of the 116th Congress at the U.S. Capitol on Thursday. Saul Loeb/AFP/Getty Images hide caption 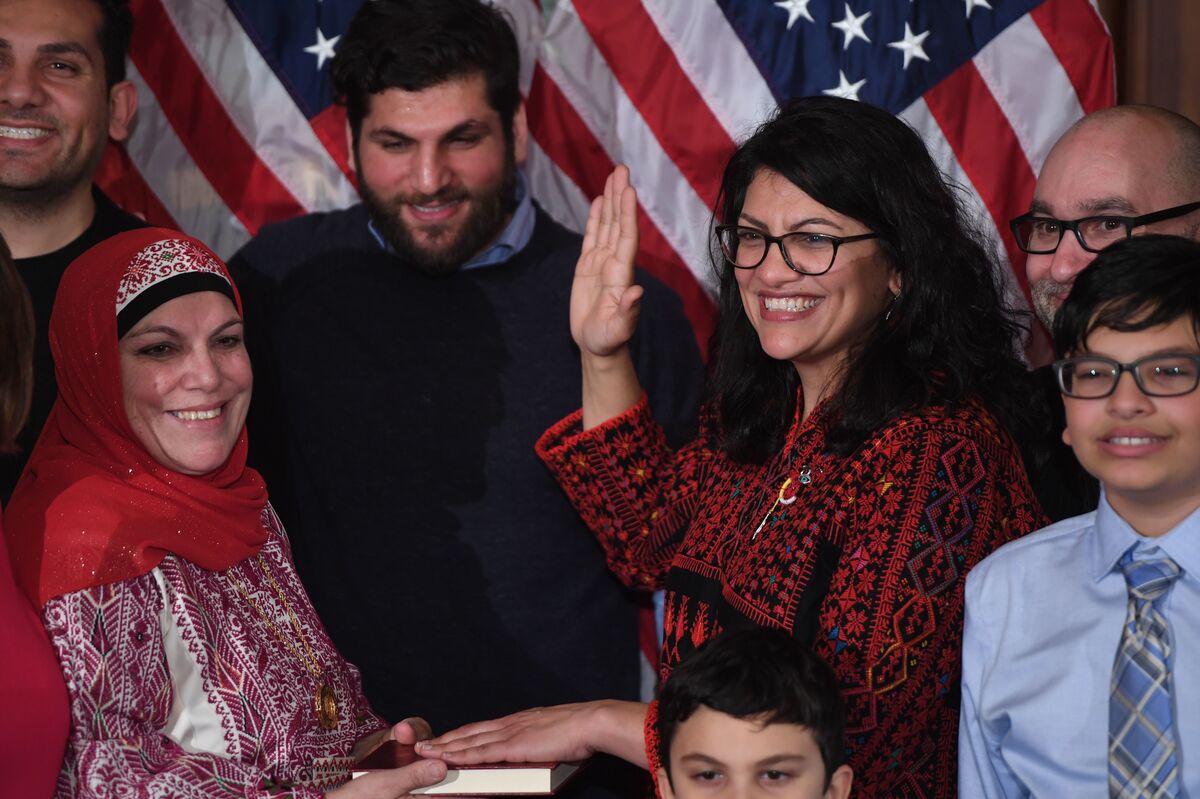 Rep. Rashida Tlaib (center), wearing a traditional Palestinian robe, takes the oath of office on a Quran at the start of the 116th Congress at the U.S. Capitol on Thursday.

On Thursday, Democrat Rashida Tlaib became the first Palestinian-American woman to serve in Congress. She wore an intricately embroidered red and black robe to her swearing-in ceremony and laid her left hand upon a Quran as she took her oath of office, inspiring legions of Palestinian-Americans who saw themselves in the attorney from Michigan.

In December, Tlaib posted a photograph to Instagram showing her wardrobe choice for the ceremony: a thobe, a floor-length black robe covered in red embroidery. She writes in Elle magazine that people from all over the country messaged her and planned to tweet pictures of themselves with the hashtag #TweetYourThobe. Tlaib adds that the garment was an integral part of her childhood:

"As a young girl, I watched my mother hand stitch thobes while sitting on the floor with a lamp at her side. She would make the small designs of flowers and different shapes. Just thinking about it brings up so many memories of my mother and how proud she was of being Palestinian. My mom is a woman who grew up in a small farming village in the West Bank called Beit Ur El Foka. She only went up to 8th grade and then dropped out to go work in a tailor shop that made dresses and different embroidered designs to make money for her family."

Tlaib writes wearing the thobe was "an unapologetic display of the fabric of the people in this country."

As Tlaib took the oath in her robe, hundreds of women posted photographs of themselves in matching style.

One Lebanese-Palestinian law student tweeted a photograph of herself in a thobe dancing the traditional Arab folk dance called the dabke and wrote, "count one young Palestinian woman with a lump in her throat thinking about how far our people have come."

Today @RashidaTlaib will be sworn into Congress wearing a Palestinian Thobe just like the one I’m dancing Dabkeh in below— count one young Palestinian woman with a lump in her throat thinking about how far our people have come. #TweetYourThobe pic.twitter.com/mZ0lxGBTgR

MSNBC anchor Ayman Mohyeldin tweeted a picture of his daughter and niece in thobes. He said it was in homage to his Palestinian mother.

As the son of a Palestinian mother, its a milestone for Palestinian-Americans to see their culture and heritage reflected in their elected officials. Young girls like my daughter and niece now have officials they can see & aspire to be like one day! @RashidaTlaib #tweetyourthobe pic.twitter.com/zJ9RPuAXPi

Thobes are elaborate garments. The stitching, known as tatreez, can take months and the most intricate sell for more than $1,000. They are commonly worn by older women, but younger women also wear them, especially at special events. Instagram user bellqees wrote that "a Palestinian thobe is a love letter to the gardens we played in as children and picked fruit from as adults."

The thobe is also a symbol of Palestinian nationalism. In 2009, women in the West Bank city of Hebron sewed and embroidered a black and red dress that was 107 feet long and aimed to get recognized by the Guinness World Records, according to the BBC.

Palestinian folk artist Feryal Abbasi Ghnaim told the Institute for Palestine Studies that in traditional rural life, girls were often confined to the home while boys played outside and went to school, and so they learned the handicrafts from their mothers and grandmothers. Ghnaim said the cross-stitch is the mainstay of Palestinian embroidery patterns, and colors and patterns could signal women hailed from certain regions or were married or pregnant.

Author Lena Khalaf Tuffaha‏ wrote that she wore a thobe that dated more than 100 years from Beersheba.

Good Morning and Congratulations @RashidaTlaib ❤️
This thobe, over 100 years old and from Beer ElSabe3, was a wedding gift from my mother-in-law. Yalla, #TweetYourThobe pic.twitter.com/bU6e4pKlZo

History teacher Hanna Alshaikh tweeted that she wore a thobe when she graduated from her master's program.

#ThobebackThursday to when I graduated with my MA, in honor of @RashidaTlaib being sworn in today #TweetYourThobe pic.twitter.com/wJViIe8Vmz

Tlaib and Omar are among the most diverse class of congressional lawmakers in U.S. history, including the first Native American women, Reps. Sharice Davids, D-Kan., and Deb Haaland, D-N.M., and the first openly bisexual senator, Kyrsten Sinema, D-Ariz. Haaland wore a traditional Pueblo dress for her swearing in. 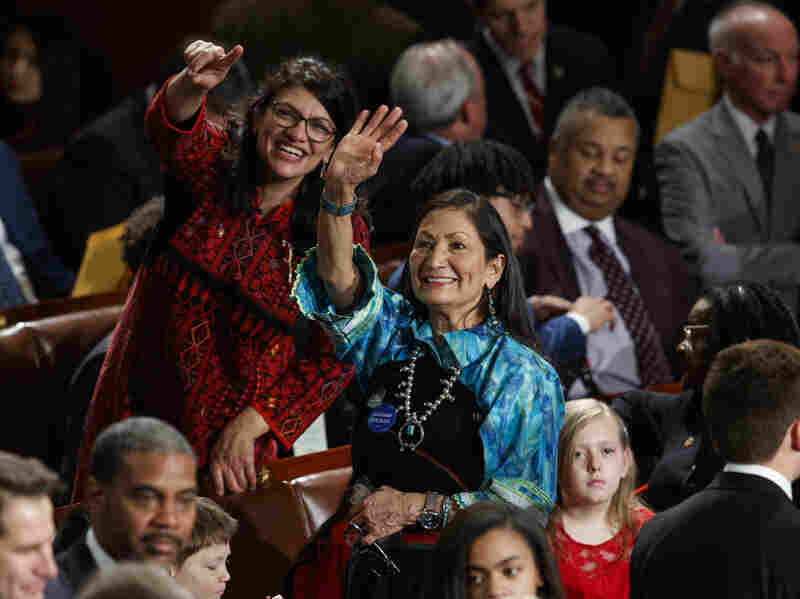 Rep. Rashida Tlaib (left) and Rep. Deb Haaland look up to the gallery at the U.S. Capitol on Thursday, their first day as members of Congress. Carolyn Kaster/AP hide caption 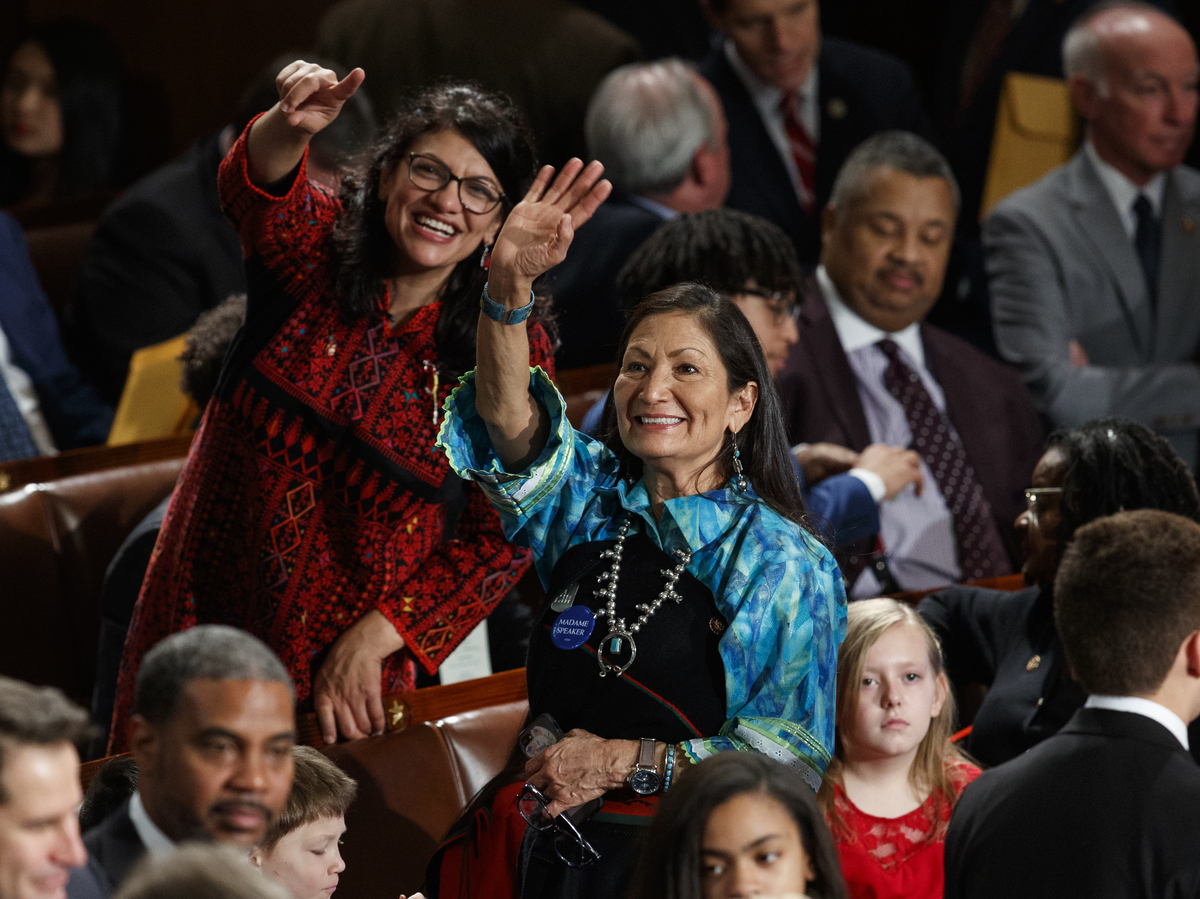 Rep. Rashida Tlaib (left) and Rep. Deb Haaland look up to the gallery at the U.S. Capitol on Thursday, their first day as members of Congress.

The junior lawmakers are also among the more liberal flank of the party. On Tlaib's first day in office, she published an op-ed in the Detroit Free Press titled, "Now is the time to begin impeachment proceedings against President Trump." Moderate voices in the party, including House Speaker Nancy Pelosi, D-Calif., have warned against impeachment unless the measure is bipartisan.

Later in the day, Tlaib provoked more controversy when she issued a profane impeachment threat against the president during a reception hosted by the progressive advocacy organization, MoveOn.org. Tlaib told the crowd: "... we're gonna go in there and we're gonna impeach the motherf*****." The crowd roared.

Tlaib often speaks about her Palestinian heritage, but as a representative of a district where fewer than 5 percent of voters identify as Arab-American, she campaigned on broader issues. As an attorney, she has focused her career on environmental advocacy, reports NPR's Camila Domonoske. Tlaib led the charge against Koch Carbon for heaping petroleum coke on the banks of the Detroit River. She has also pledged to fight for Medicare for all.

Because of incorrect information provided by Getty Images, a previous photo caption incorrectly identified the Quran used by Rep. Rashida Tlaib as the Thomas Jefferson Quran. Tlaib used her own Quran.