Accessibility links
Latest Baltimore Police Chief Candidate Drops Bid Amid Relentless Turnover Baltimore is for a police commissioner job yet again. Fort Worth Police Chief Joel Fitzgerald was scheduled to have confirmation hearings on Monday but instead pulled his name from consideration. 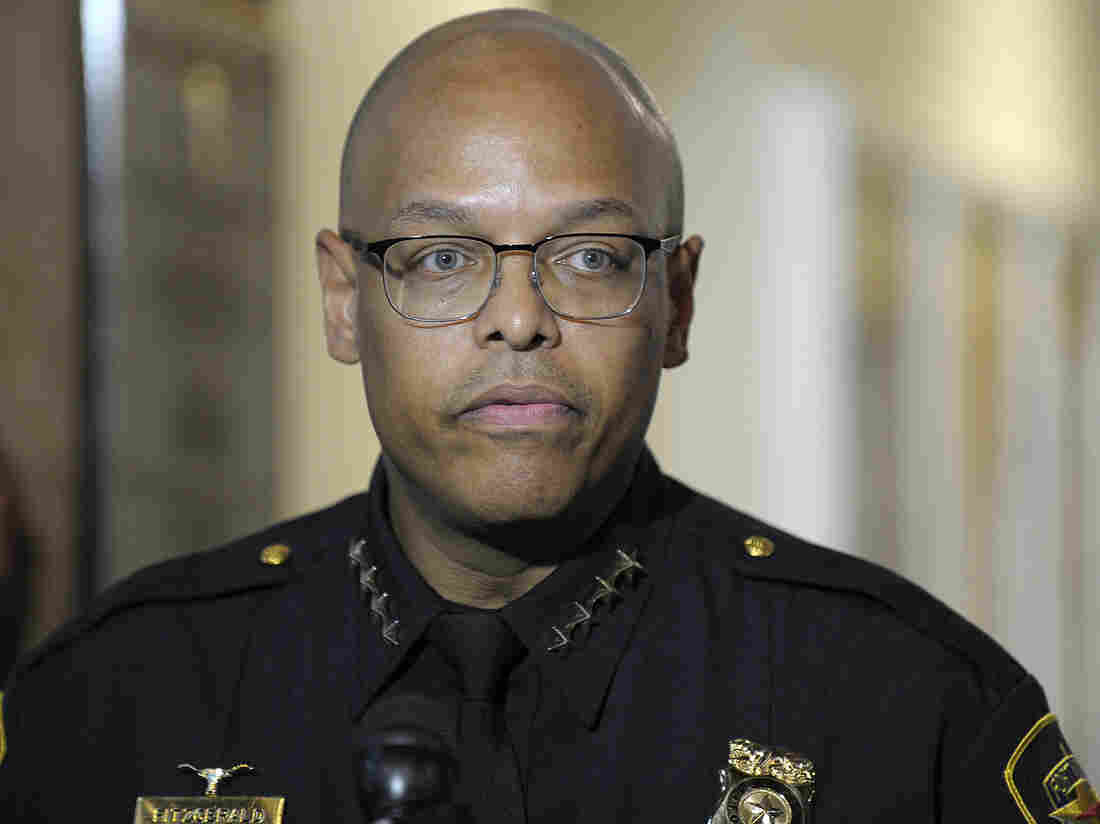 Fort Worth Police Chief Joel Fitzgerald was the nominee to become Baltimore's next police commissioner. Fort Worth Star-Telegram/TNS via Getty Images hide caption 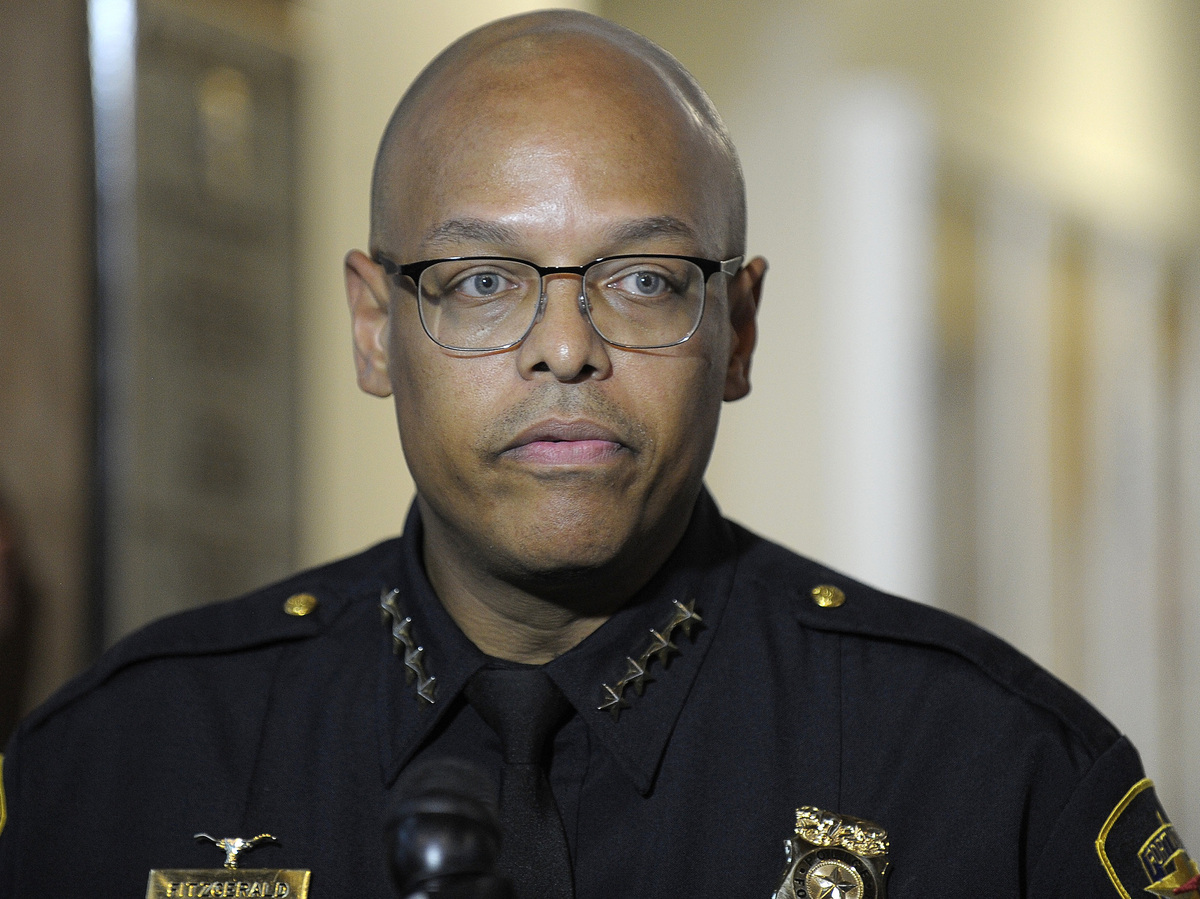 Fort Worth Police Chief Joel Fitzgerald was the nominee to become Baltimore's next police commissioner.

Fort Worth Star-Telegram/TNS via Getty Images

Joel Fitzgerald, the man vying to become Baltimore's fourth police commissioner in roughly the span of a year, has withdrawn his name from consideration, according to the office of Baltimore Mayor Catherine Pugh.

Fitzgerald, who has served as police chief in Fort Worth, Texas, since 2015, was scheduled to have a confirmation hearing Monday before the Baltimore City Council, but it was postponed due to a medical emergency involving his son.

By Monday morning, he pulled himself out of the running.

"After a lengthy discussion with Chief Joel Fitzgerald, I respect his decision to withdraw his candidacy for Baltimore Police Commissioner in order to devote his full attention to his son who is now facing a second brain surgery tomorrow to remove a mass that was discovered late last week," Pugh said in a statement.

The process of confirming Fitzgerald had hit a few snags since the mayor nominated him in November.

On Saturday, the Baltimore Sun reported that the Baltimore City Council had "heard a barrage of concern, frustration and outright opposition" to the selection of Fitzgerald.

It came days after the paper found Fitzgerald embellished his role instituting the Fort Worth Police Department's body camera program and that he took credit for the department's improved reporting on racial profiling despite a law in Texas mandating such efforts.

The NAACP Legal Defense and Educational Fund issued a statement calling for the city to withdraw Fitzgerald's nomination and consider other finalists.

"Fitzgerald's record and the process used to select him gives us no confidence that he is the commissioner Baltimore needs," the organization said in a tweet.

BREAKING: We urge @MayorPugh50 to withdraw her nomination of Baltimore Police Commissioner-Designate Joel Fitzgerald. Fitzgerald's record and the process used to select him gives us no confidence that he is the commissioner #Baltimore needs.

Fitzgerald, the first African-American police chief in Fort Worth, was Baltimore Mayor Catherine Pugh's pick to clean up the department.

Over the past few years, the Baltimore Police Department has been scourged by internal scandal, more than 300 homicides a year for four consecutive years and a history of mistrust between officers and the community.

"I think we have a very great opportunity to mend some of the broken fences ... that have happened over the last few years," Fitzgerald said at a press conference in November.

How Baltimore got here

At the time of Davis' firing, Pugh said she had grown "impatient" with a perpetually high homicide rate.

"My decision is based on the fact that we need to get these numbers down," Pugh said at the time.

Davis was brought in as commissioner by the previous mayor, Stephanie Rawlings-Blake, after his predecessor, Anthony Batts, was relieved of his duties in the wake of riots sparked by the death of Freddie Gray. Gray, a 25-year-old black man, died of injuries he suffered while in police custody.

After Gray's death in 2015, the city erupted into riots, and the National Guard was called in to quell the unrest.

The following year, the Department of Justice issued a scathing report attesting the Baltimore Police Department engaged in discriminatory policing.

In 2017, homicides in Baltimore reached 343 — a per-capita record for the city — the same year the city entered into a consent decree with the DOJ mandating reforms within the police department.

By early 2018, Pugh had decided it was time, again, to make a change at the top of the department. Her next pick was Darryl De Sousa. He was on the job less than four months before resigning for failing to pay multiple years worth of federal taxes.

He pleaded guilty last month and is set to be sentenced in March.

The interim commissioner, Gary Tuggle, removed his name from consideration for the permanent job.

Trouble inside, looking outside

Chuck Wexler, of the Police Executive Research Forum, says chief tenure in many cities is, on average, three to five years. In recent years, police chiefs in San Francisco, Minneapolis and Chicago have been fired or resigned following officer encounters that led to civilians killings.

Wexler, who helped Baltimore recruit candidates for the police commissioner opening, says when a city looks outside its borders for candidates, it often signals an attempt at a new start.

"An outside individual has the benefit of not having any relationships with anyone inside, but it's also the challenge of getting to know a department," Wexler says.

But Leonard Hamm is not sure an outsider is what Baltimore needs at this point. He spent more than 30 years serving in the department, including as Baltimore's police commissioner from 2004 to 2007.

"For someone coming from the outside, it's going to take them at least three years to find out where the streets are, what the neighborhoods are all about," Hamm says.

All the while, he says, the outside police chief still has to deal with high crime and cleaning up the department.

Hamm adds that Baltimore residents are resilient, but what they ultimately want is for the killing to stop and for a police force they can trust.