Accessibility links
Trump Will Address Nation About Border As Shutdown Drags Into 3rd Week The president said that he will speak to the country Tuesday, prompting the leading Democrats on Capitol Hill to say they are entitled to equal airtime from the TV networks to respond to Trump. 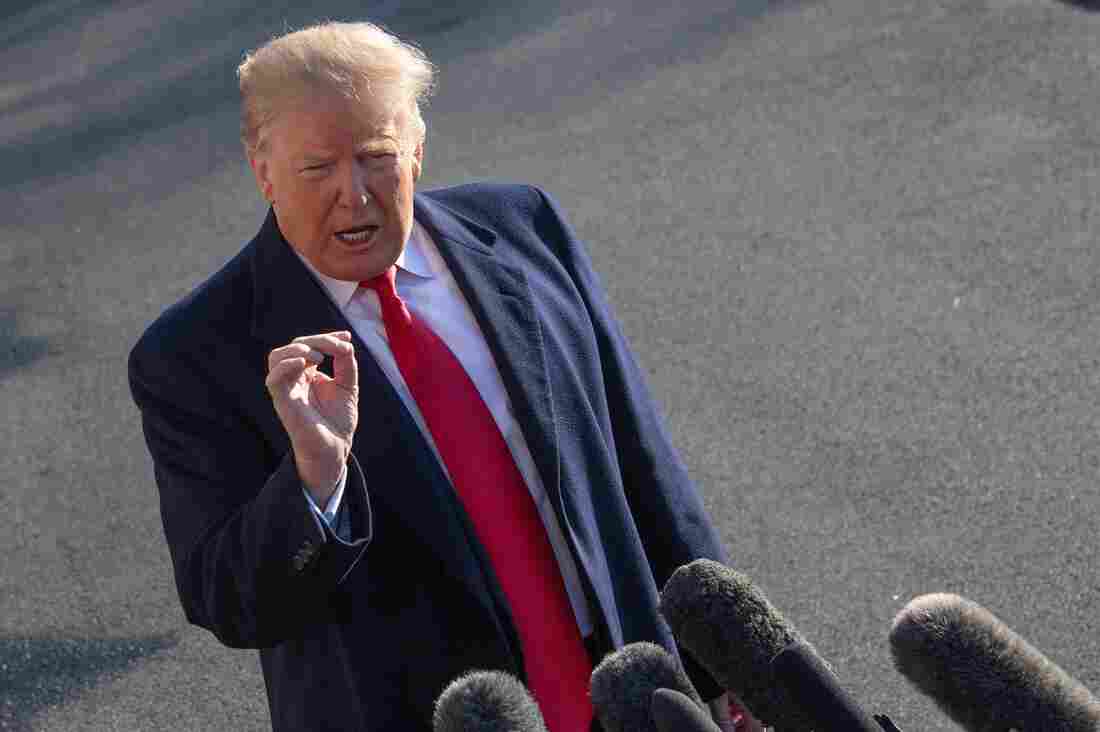 President Trump speaks as he leaves the White House for meetings at Camp David on Sunday. Trump stood firm on his demand for billions of dollars to fund a border wall with Mexico, which has forced a shutdown of the government now entering its third week. Jim Watson/AFP/Getty Images hide caption 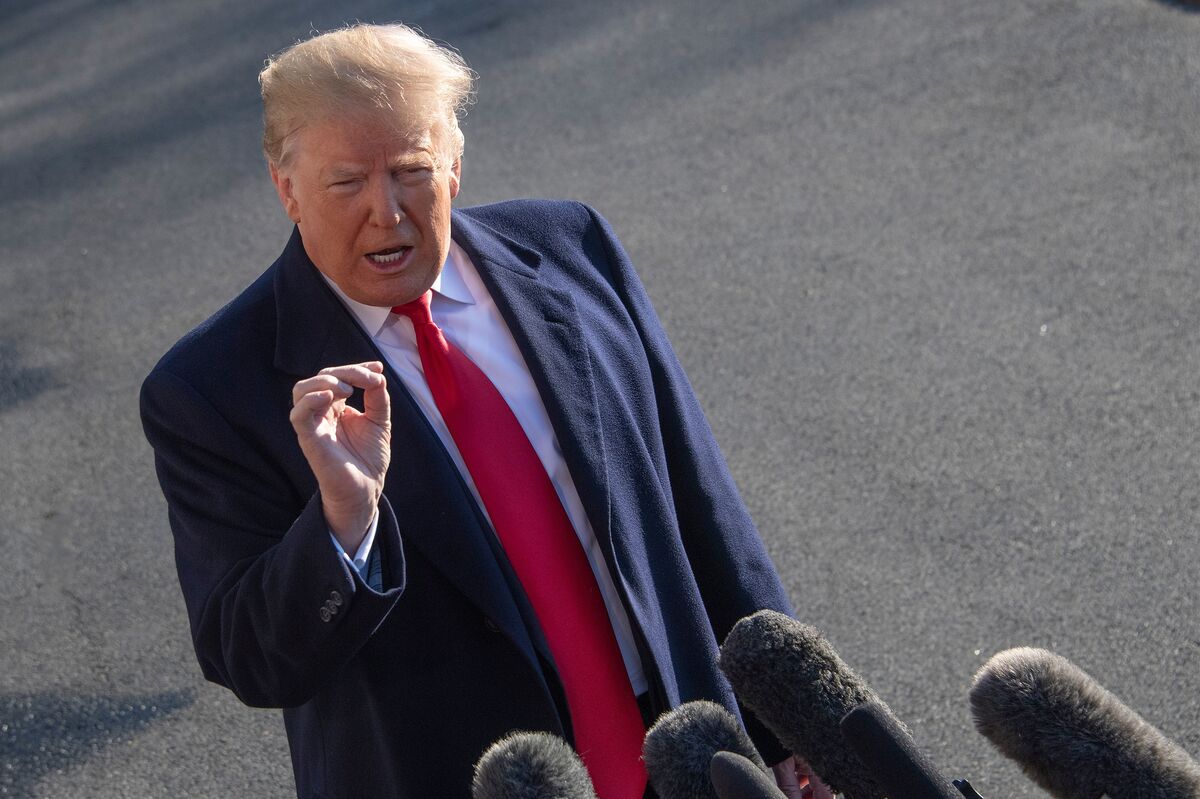 President Trump speaks as he leaves the White House for meetings at Camp David on Sunday. Trump stood firm on his demand for billions of dollars to fund a border wall with Mexico, which has forced a shutdown of the government now entering its third week.

The White House is planning a media blitz as President Trump pushes for a wall along the Southern border, which congressional Democrats have repeatedly rebuffed. This week's events involving the president come as a partial shutdown of the federal government drags into its third week with no apparent end in sight to the impasse.

Trump tweeted he will "Address the Nation on the Humanitarian and National Security crisis on our Southern Border" on Tuesday night. It will be his first Oval Office address as president. The president is asking the television networks for 7-8 minutes of airtime, White House deputy chief of staff Bill Shine told NPR.

After CNN and other outlets reported that all the major broadcast and cable networks will carry the Trump Oval Office address, the two leading Democrats on Capitol Hill demanded airtime to respond. "Now that the television networks have decided to air the President's address, which if his past statements are any indication will be full of malice and misinformation, Democrats must immediately be given equal airtime," House Speaker Nancy Pelosi, D-Calif., and Senate Minority Leader Chuck Schumer, D-N.Y., said in a joint statement.

I am pleased to inform you that I will Address the Nation on the Humanitarian and National Security crisis on our Southern Border. Tuesday night at 9:00 P.M. Eastern.

White House press secretary Sarah Sanders also announced Monday that Trump will travel to the border on Thursday "to meet with those on the frontlines of the national security and humanitarian crisis."

A wall on the Southern border with Mexico was Trump's hallmark campaign promise, and he is under pressure from his base and conservative commentators to deliver. But unable to obtain the funding he desired for it under a GOP-controlled Congress for the past two years, Trump last month said he would not sign any spending measure that did not contain sufficient funding for its construction. As a result of the standoff, about a quarter of the government shut down on Dec. 22. In 2019, the president is now hitting even more resistance from the newly installed Democratic House after a bruising midterm election cycle where Democrats won 40 House seats.

It's an argument Trump and his allies have struggled to make since before they took office, but now they will try to use his bully pulpit to move public opinion. An NPR/PBS NewsHour/Marist Poll last month found that Americans — by a 21-point margin, 57 percent to 36 percent — wanted Trump to compromise on the wall instead of shutting down the government. Over two-thirds also said a wall shouldn't be an immediate priority for Congress.

Weekend talks between Vice President Pence and congressional staffers to resolve the shutdown stalemate produced no breakthrough. Although Trump characterized the talks as "productive," Democrats said there was no progress.

Pence told reporters at the White House on Monday that Trump was "considering" declaring a national emergency — the option is being "looked at and examined" — which could allow him to begin construction of the wall.

Over the weekend, the White House did formalize its request for $5.7 billion to fund the border wall — a number Pence said Monday Trump will not retreat from. In a letter to lawmakers, the administration said that sum would pay for 234 miles of new barrier, at a cost of roughly $24 million per mile. The material used would now be steel, not concrete.

Pence argued that this approach represented a compromise on the White House's part, to go beyond just a wall and fund things Democrats want too. And he pushed back on criticism that this was just a way to appeal to Trump's "base."

Congressional Democrats are resisting the president's demand for wall funding. Trump "is still demanding that American taxpayers pay at least $5.7 billion for his wall, which can't pass either chamber of Congress and of course Mexico is not paying for," Pelosi and Schumer also said in their statement Monday night.

In an exercise in political messaging, the House is expected to begin voting Tuesday on a series of bills to reopen shuttered government agencies without additional money for a border barrier. Although a handful of Republican senators from swing states have expressed a desire to end the partial shutdown, Senate Majority Leader Mitch McConnell, R-Ky., is adamant that the Senate will not vote on funding bills that don't have support from the president.

Meanwhile, Senate Democrats say they will block even bringing up the start of legislative business this week. According to a senior Democratic aide, Schumer has notified the caucus he will vote against proceeding to the first bill of the session because Senate Republicans should instead be bringing up the Democratic-led House-passed bills to reopen the government.

Friday is a scheduled payday for federal workers. If the impasse is not resolved by then, some 800,000 federal employees will miss being paid for the first time during the shutdown.

If the standoff continues into the weekend, it will be the longest shutdown in recent history. It also has the potential to impact February food stamp benefits provided by the Supplemental Nutrition Assistance Program. Tax refund checks might have been disrupted too, but the White House said Monday the IRS will issue refunds during the shutdown.