Accessibility links
Israel Arrests 5 Teenage Suspects In Fatal Stoning Of Palestinian Woman The arrests in the fatal attack on a Palestinian woman last year have highlighted a rift between Israel's security establishment and hawks in the settler community. 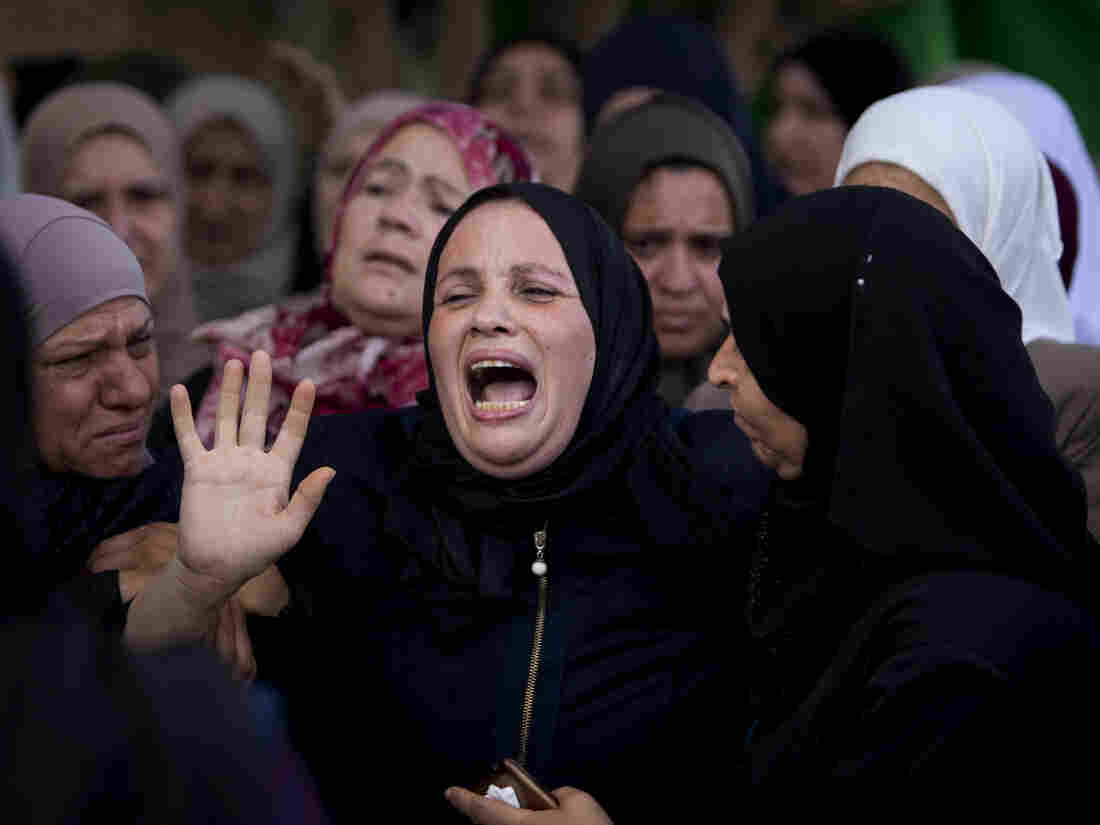 Relatives of Aisha Rabi, 48, mourn at the family home during her funeral in the West Bank village of Bidya in October 2018. Majdi Mohammed/AP hide caption 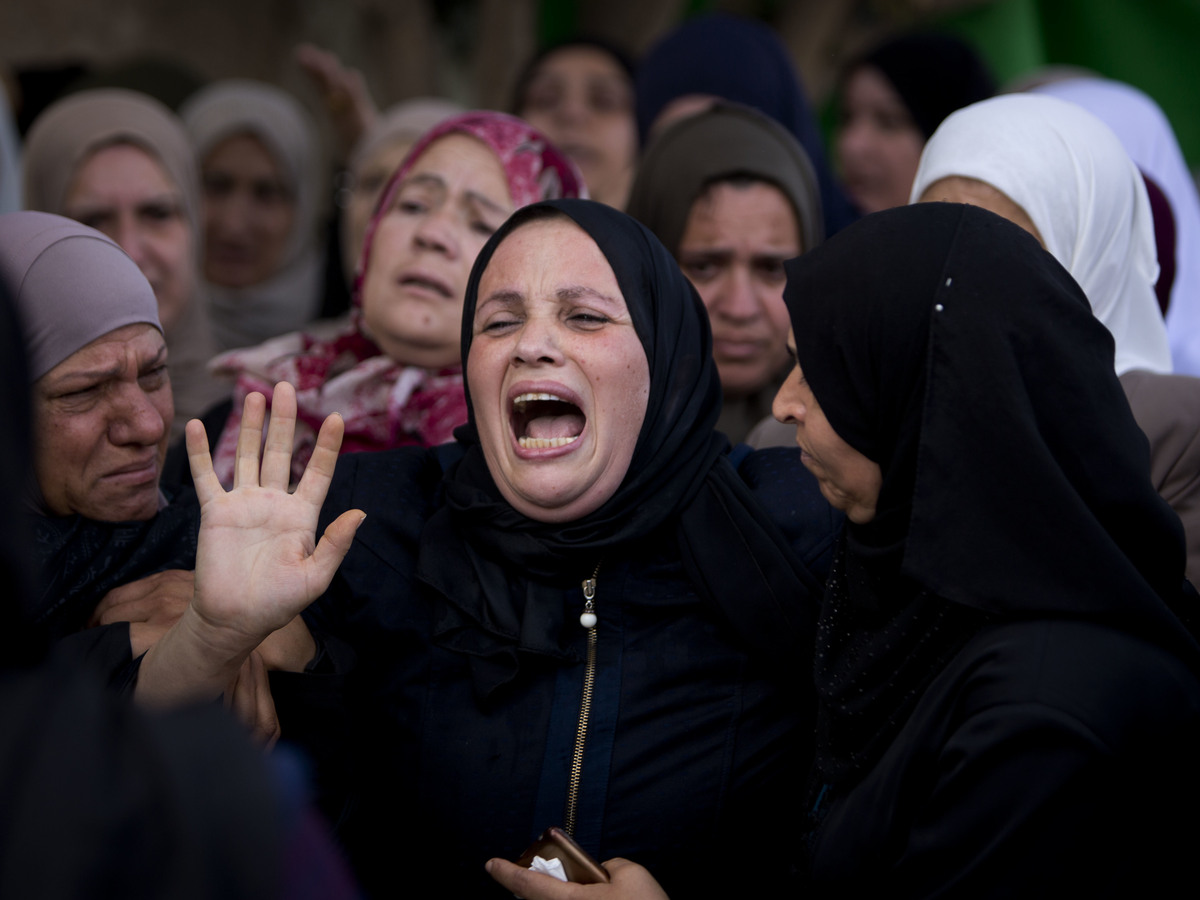 Relatives of Aisha Rabi, 48, mourn at the family home during her funeral in the West Bank village of Bidya in October 2018.

Israel's security service says it has arrested five Israeli yeshiva students allegedly involved in last year's fatal stoning of a Palestinian woman in the West Bank. The arrests in late December have heightened tensions between the state and radical Israeli settlers and their supporters ahead of national elections in April.

Aisha Rabi, 48, was on her way home to Bidya in the northern West Bank on a Friday night in October 2018 when her family's car came under a hail of stones. She was struck in the head and died. Thousands of people attended the funeral of the woman survived by a husband and eight children, The Associated Press reports.

Rabi's widower, Yacoub, tells the Israeli daily Haaretz that he was driving the car and saw a group of young men standing nearby. He says he was certain no Palestinians would be out that late in that area, which is close to several ultranationalist Israeli communities. "I don't have any doubt it was the settlers," he says.

Families of the suspects have cited unfair treatment at the hands of the state and have received sympathy at high levels of office. This has prompted accusations that Israeli authorities will ease potential punishment of suspects in a murder case.

Israeli media broadcast a recording Thursday of a phone call between Justice Minister Ayelet Shaked and the mother of one of the suspects. The mother says her son has not yet seen a lawyer. Shaked answers that while she can't intervene in the investigation, she will speak to the state prosecutor.

"Be strong, and you know, it will end in the coming days, I estimate," Shaked says.

Israeli authorities partially lifted a gag order on the case Sunday as they released information about the arrests.

The Shin Bet says the suspects are students at the Pri Haaretz yeshiva in the Rehelim settlement in the northern West Bank. On the Saturday morning after the attack, the agency says, the teens traveled to Rehelim from the nearby settlement of Yitzhar for "a briefing for youths studying at the yeshiva on how to prepare and cope with Shin Bet investigations."

This would be unusual, because most yeshiva students would observe the religious injunction not to drive on the Sabbath. Sympathetic rabbis reportedly ruled that the settler activists could violate the Sabbath because the Shin Bet investigation could pose a danger to their lives.

Since Shaked's call, some suspects have reportedly met with attorneys. The lawyers say their clients have been shackled to chairs, shouted at, cursed and denied their civil rights — and that two of the youths have still not been allowed to meet with legal counsel. Attorney Itamar Ben-Gvir has called on Prime Minister Benjamin Netanyahu to stop the Shin Bet and demand the release of the suspects.

"Mister prime minister, we shout out and cry to you, they are impinging on the rights of children. Stop this behavior," Ben-Gvir said during a news conference.

The Shin Bet notes that "from the beginning of the arrests" there has been a "coordinated and ongoing effort from sources with an interest in slandering the organization and its workers and delegitimize its activities."

The Shin Bet adds that in the past year it has thwarted "hundreds of terrorist activities" in the West Bank "among them — also Jewish terrorist attacks."

The suspects in Rabi's death are anti-Zionists, the Shin Bet notes. The security services said one of the suspects had in his room an Israeli flag with a swastika drawn on it.

Rabi died during an uptick of violence in the West Bank. Days before her death, a Palestinian gunman killed two Israelis at a factory near the settlement of Ariel, the BBC reports. Ariel is also in the northern West Bank, not far from where Rabi was attacked. It is unclear whether the two incidents were related.

In 2018, Haaretz reports, Jewish perpetrators committed 482 acts of violence and property damage against Palestinians, an increase of more than threefold from the previous year.

The arrests come after Prime Minister Netanyahu called for early elections in April. Among his critics are Shaked and Naftali Bennett, hardliners who have formed a new political party and accuse Netanyahu of being too harsh on settlers.

Rabi's death triggered a note of sympathy for Palestinians from a U.S. administration that has taken several high-profile steps in favor of Israel, including moving the U.S. Embassy to Jerusalem and cutting off support to the United Nations agency that aids Palestinian refugees. After the attack that killed Rabi, U.S. special envoy Jason Greenblatt issued a tweet, saying his thoughts and prayers were with Rabi's family. "An investigation into this reprehensible act is ongoing," he added.