Accessibility links
Civil Rights Award Rescinded From Angela Davis After Jewish Community Objections The Birmingham Civil Rights Institute planned to honor the activist at a February event. It now says her statements and public record do not "meet all of the criteria on which the award is based." 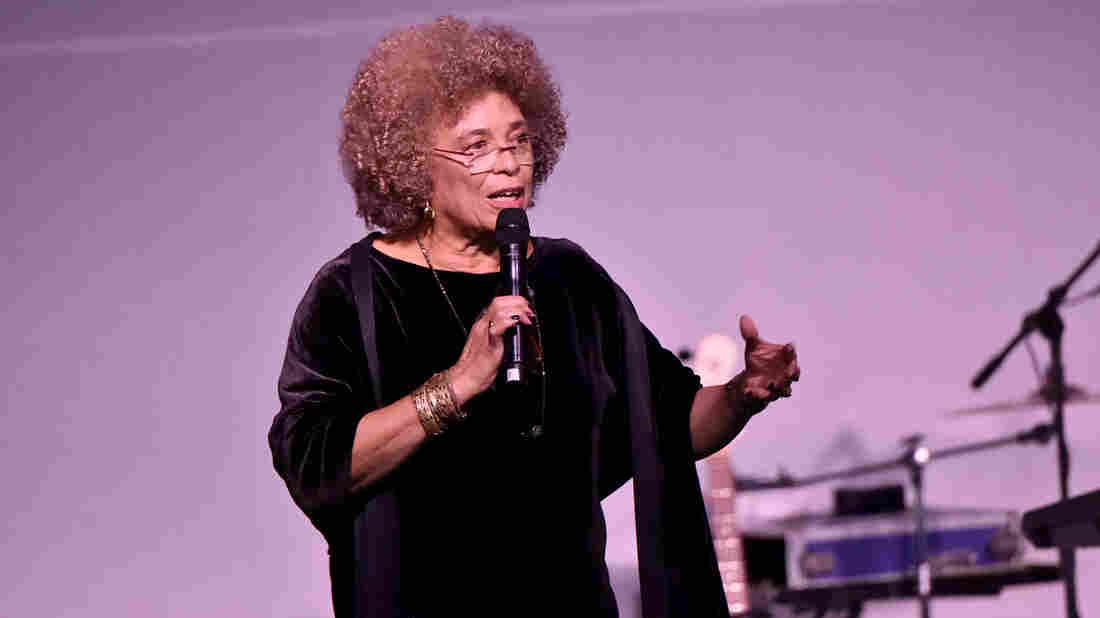 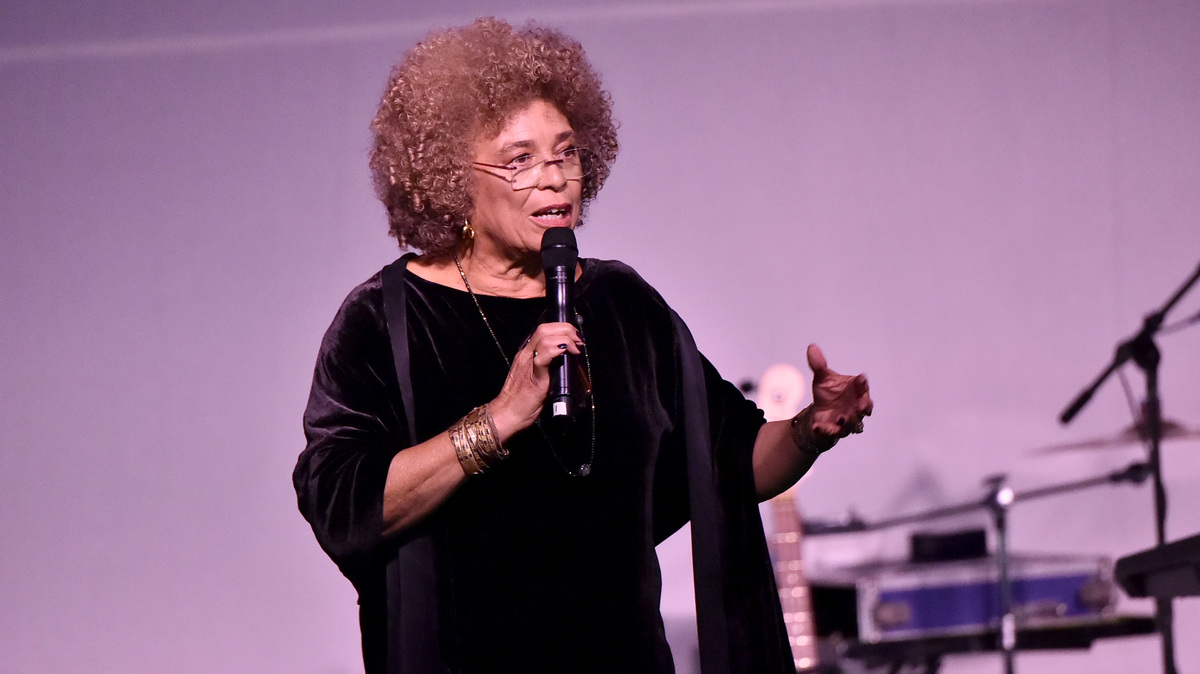 The Fred Shuttlesworth Human Rights Award is supposed to honor the civil rights leader's legacy and raise funds for the Birmingham Civil Rights Institute. But after some members in the city's Jewish community objected to giving the award to human rights activist Angela Davis, this year's award presentation is derailed and the community is divided.

In October, the Birmingham Civil Rights Institute's board announced it would honor Davis at a February event. Now, it says, the award presentation is canceled because Davis' statements and public record do not "meet all of the criteria on which the award is based." Attempts to get more details from the board regarding its decision have been unsuccessful.

Temple University professor and commentator Marc Lamont Hill, who has faced criticism himself over his past comments supporting Palestinians, tweeted in support of Davis.

"This is shameful," he wrote.

This is shameful. I stand with my dear sister and friend Angela Davis. https://t.co/gj69Fpk0AQ

The JewishVoiceForPeace tweeted: "To argue that Angela Davis is unworthy of a civil rights award is beyond shameful. And to dance around the fact that it's due to her outspoken support of Palestinian rights makes it outrageous."

To argue that Angela Davis is unworthy of a civil rights award is beyond shameful. And to dance around the fact that it’s due to her outspoken support of Palestinian rights makes it outrageous. https://t.co/dC2yplrFYE

Part of the board's decision may be tied to a statement and social media post from a prominent Birmingham civic leader and an essay in the magazine Southern Jewish Life.

Retired Gen. Charles Krulak, a former local college president, issued a statement saying he was saddened by Davis' selection and questioned whether she deserved the award. He referred to details from Wikipedia discussing Davis' membership in the Communist Party in the 1980s and her support of Soviet bloc countries in the 1970s. The statement was posted to Facebook by Richard Friedman of the Birmingham Jewish Federation last week, but has since been removed: 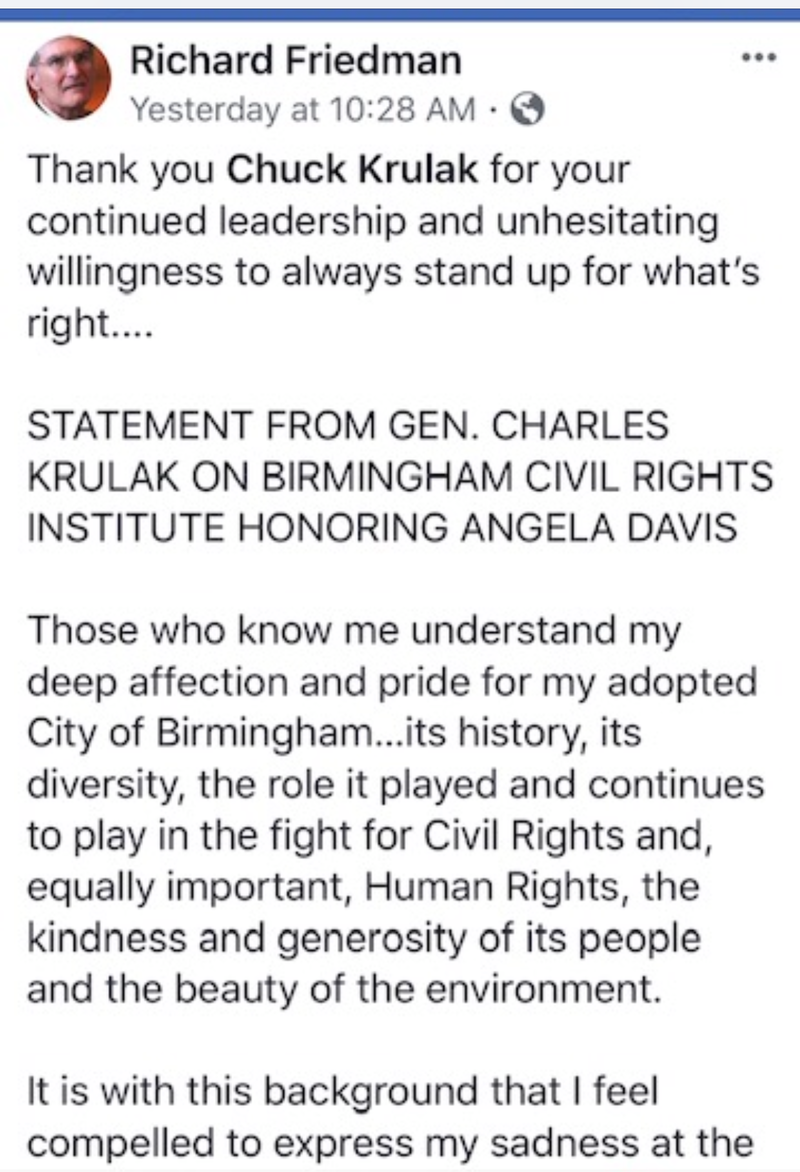 In the Southern Jewish Life article, author Larry Brook took issue with Davis' stance as an "outspoken voice in the boycott-Israel movement" and her comparing Israel's treatment of Palestinians to police shootings of African-Americans.

Davis responded late Monday, saying she asked for more substantive details on the board's decision and learned that her long-term support of justice for Palestinians was at issue.

"This seemed particularly unfortunate, given that my own freedom was secured — and indeed my life was saved — by a vast international movement," Davis said. "And I have devoted much of my own activism to international solidarity and, specifically, to linking struggles in other parts of the world to U.S. grassroots campaigns against police violence, the prison industrial complex, and racism more broadly."

Davis grew up in a Birmingham community that was known as Dynamite Hill, because the Ku Klux Klan frequently bombed the homes of black lawyers, business owners and leaders who lived there.

The author of 10 books, Davis has lectured throughout the United States and in Europe, Africa, Asia, Australia and South America. Her works address the social problems associated with incarceration, poverty and race. In the early 1970s, she spent 18 months in jail and on trial, after being placed on the FBI's "10 Most Wanted List."

Davis said that receiving the award would have been the highlight of her year because "I knew Rev. Shuttlesworth personally and attended school with his daughter, Patricia, and because my mother, Sallye B. Davis, worked tirelessly for the BCRI during its early years."

Davis still plans to visit Birmingham in February and said she will speak at an alternative event.

A passionate Birmingham City Councilor Steven Hoyt said: "It's disheartening. It's embarrassing to judge a person by a segment of their life. We let a few folk decide how we celebrate the black community. We all should be outraged. She's a premier person when it comes to women's rights, race relations. Here she has an opportunity to be honored."