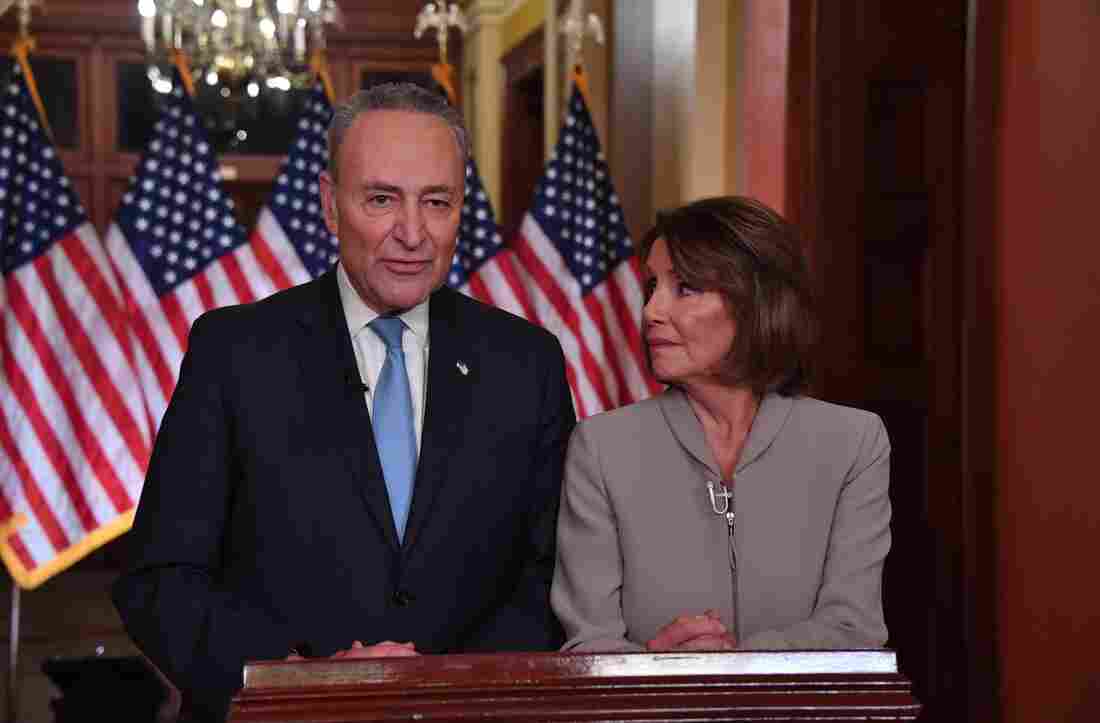 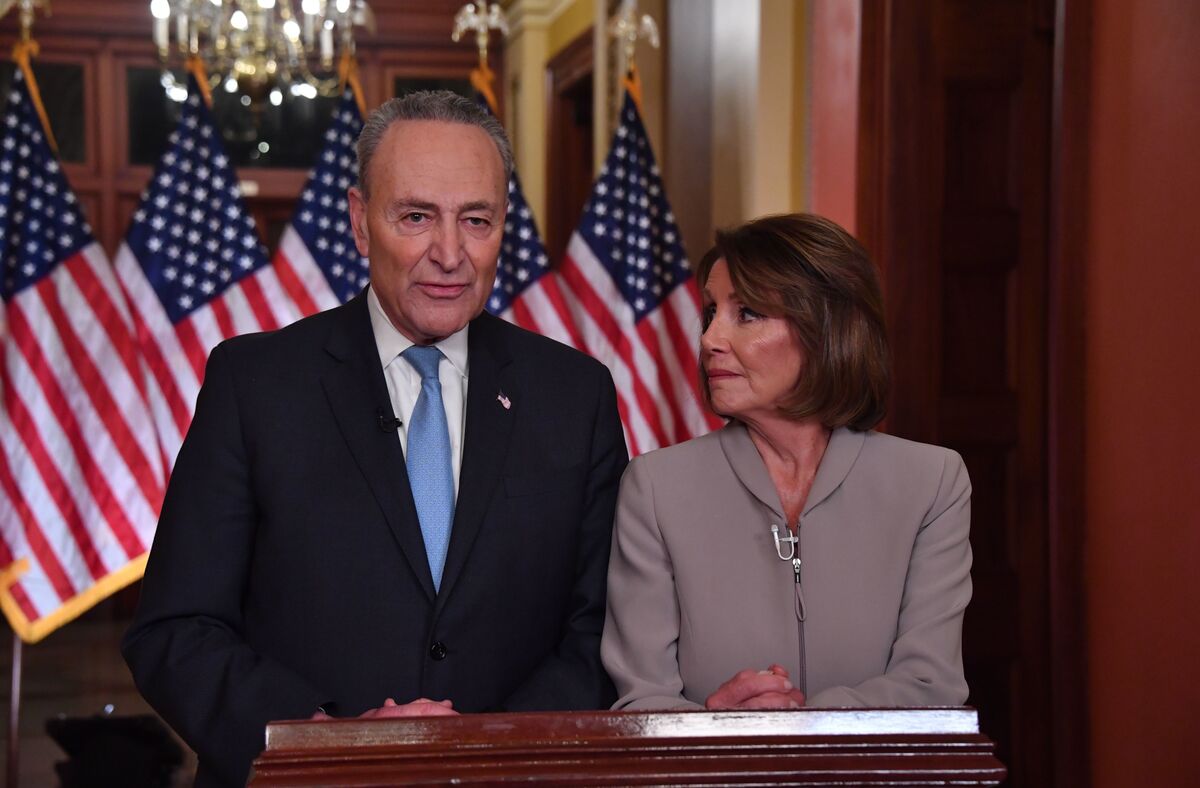 Democrats again rejected President Trump's demand for a wall on the Southern border following an Oval Office address Tuesday night in which Trump insisted the wall is the only solution to an influx of migration from Mexico and Central America.

House Speaker Nancy Pelosi, D-Calif., and Senate Minority Leader Chuck Schumer, D-N.Y., called Trump's decision to shut down the government over the wall "just plain wrong" in a televised response to the president's address. The speeches were part of an aggressive public relations campaign to win public support in the standoff over the 18-day partial government shutdown.

Trump Pushes For Wall Amid Shutdown, Says There's 'A Crisis Of The Heart' At Border

Both speeches hewed closely to a set of familiar demands and talking points that have dominated the debate over the wall since before the shutdown began in late December. Trump insisted a wall is the only solution and Democrats refused to approve funding to build it.

Schumer and Pelosi also repeated their request that the government be reopened now and immigration and border security legislation be negotiated later.

"There is an obvious solution," Schumer said. "Separate the shutdown from the arguments over border security. There is bipartisan legislation — supported by Democrats and Republicans — to reopen government while allowing debate over border security to continue."

But Trump had already flatly rejected that idea in the speech that preceded their remarks.

"The federal government remains shut down for one reason and one reason only: because Democrats will not fund border security," Trump said. "The only solution is for Democrats to pass a spending bill that defends our borders and reopens the government."

Trump called his request for a wall a humanitarian necessity, arguing the wall would block criminals and other bad actors from entering the country.

"This is a choice between right and wrong, justice and injustice," Trump said. "This is about whether we fulfill our sacred duty to the American citizens we serve."

But Pelosi and Schumer said they are willing to support increased border security that does not involve a physical barrier on the Southern border.

"We all agree that we need to secure our borders, while honoring our values: We can build the infrastructure and roads at our ports of entry," Pelosi said. "We can install new technology to scan cars and trucks for drugs coming into our nation; we can hire the personnel we need to facilitate trade and immigration at the border; and we can fund more innovation to detect unauthorized crossings." 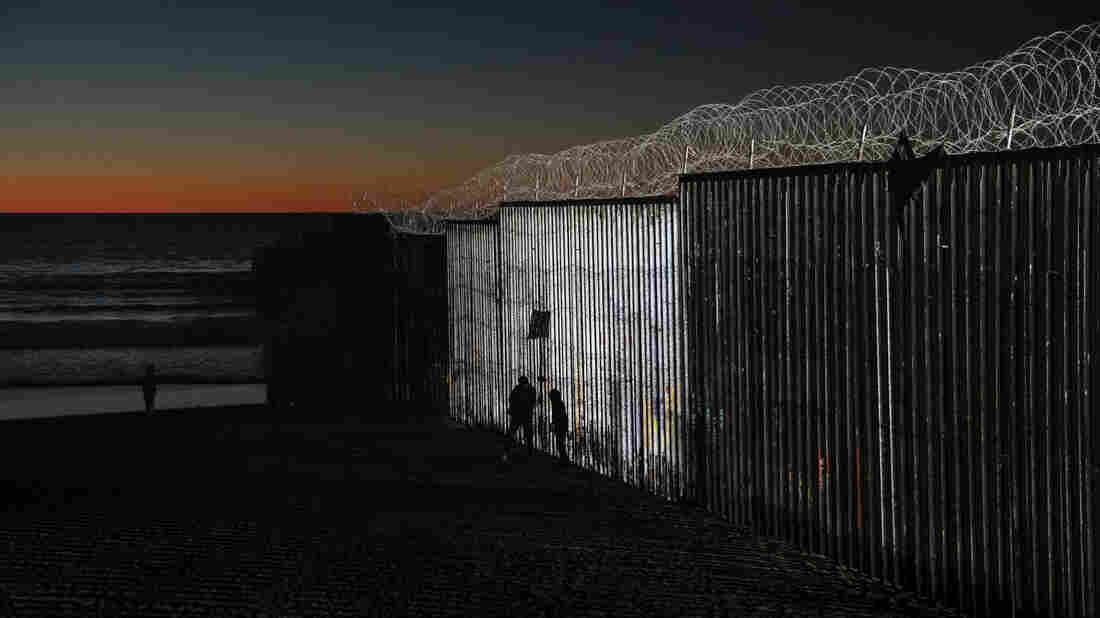 Democratic congressional leaders are in a stalemate with President Trump that has kept the government partially closed since Dec. 22. Each side is scheduled to address the nation Tuesday evening. Daniel Ochoa de Olza/AP hide caption 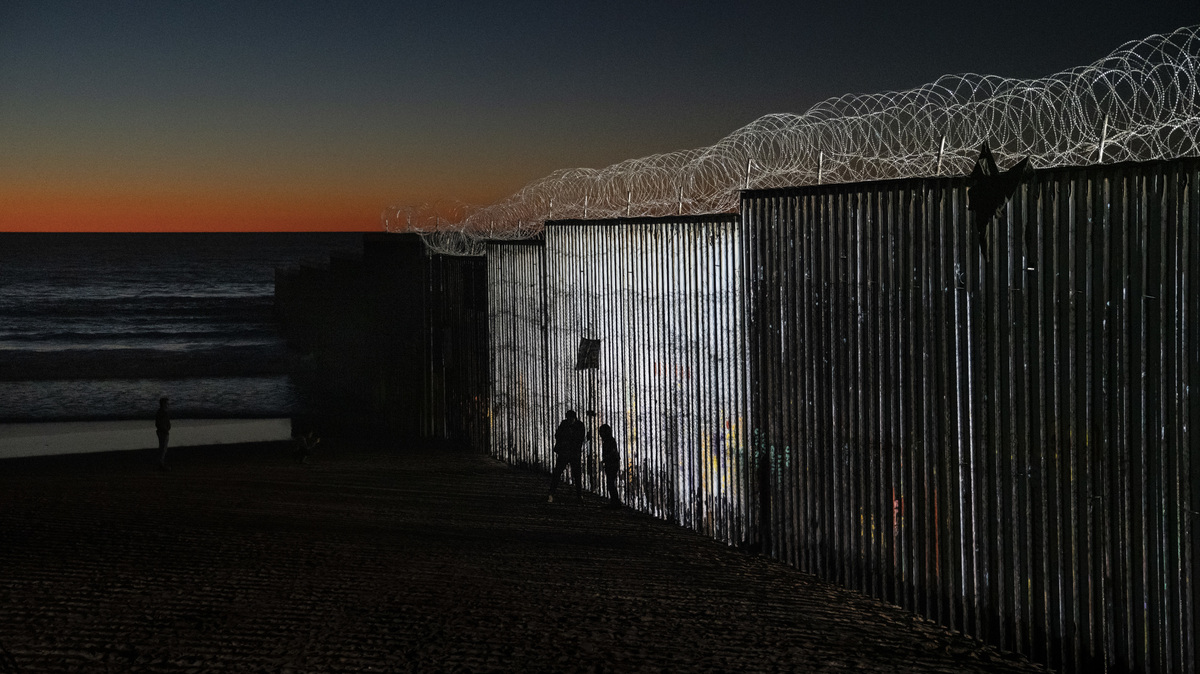 Democratic congressional leaders are in a stalemate with President Trump that has kept the government partially closed since Dec. 22. Each side is scheduled to address the nation Tuesday evening.

Negotiations over the spending impasse are expected to continue Wednesday when top Senate and House Democratic and Republican leaders are set to meet at the White House to discuss the shutdown, according to multiple congressional sources. Trump and Vice President Pence are also set to speak with Senate Republicans on Wednesday.

The administration effort to rally Republicans began Tuesday night when Pence, acting White House chief of staff Mick Mulvaney, Secretary of Homeland Security Kirstjen Nielsen and officials from the Office of Management and Budget briefed House Republicans. They discussed the security situation at the border and the administration's plans for handling the ongoing partial shutdown.

The White House representatives assured Republicans that national parks will remain open and food stamps will continue to be paid through at least February via the Supplemental Nutrition Assistance Program, according to several members who attended the meeting.

Longtime Trump supporter Rep. Chris Collins, R-N.Y., said Pence in particular reassured members that the administration and Senate Republicans are committed to pursuing the border wall and encouraged them to stick together.

"Sometimes you need the coach to come rah-rah the team in the locker room," Collins said. "He did that very thoughtfully with facts."

House Minority Leader Kevin McCarthy, R-Calif., later told reporters that administration officials did not address the possibility that Trump might declare a state of emergency to build the wall without congressional approval.

Trump's wall has transcended typical Washington bickering over policy goals to become a political battle over the central ideologies of both parties. Democrats insist the wall is immoral, and Trump says it is imperative.

"Democrats and an increasing number of Republicans in Congress have repeatedly urged the President and Leader McConnell to end the Trump Shutdown and re-open the government while Congress debates the President's expensive and ineffective wall," Schumer and Pelosi said in a statement on Tuesday. "Unfortunately, President Trump keeps rejecting the bipartisan House-passed bills."

Republican congressional leaders have largely backed Trump in his push for the wall. Senate Majority Leader Mitch McConnell, R-Ky., dismissed Democrats Tuesday, blaming them for refusing to budge on the wall. "Walls and barriers are not immoral. How silly," McConnell said in a speech on the Senate floor. "It is just political spite."

But Democrats say the stalemate over Trump's demand for $5.7 billion to build the wall worsened over the weekend after the White House issued an updated list of demands that include 234 miles of new steel wall.

House Majority Leader Steny Hoyer, D-Md., said a new batch of polls shows voters back Democrats or want a compromise now. He said the White House ignored those statistics when issuing the updated request. "There was a very negative reaction by the American public," Hoyer said. "[The administration] escalated their demands, not compromised their demands."

"McConnell has the ability to put these bills on the floor and say to the president of the United States, 'We're an independent branch; we're not the president's handmaids,' " Hoyer added. "We ought to pass bills that we believe are good policy."

Democrats are also working to sway some moderate and skeptical Republicans to abandon Trump on the wall. Last week, seven House Republicans voted with Democrats on a package of bills to reopen the government without an immediate resolution on the wall. Hoyer said he believes even more Republicans could join them later this week when Democrats begin holding votes on individual spending bills that were written last year by GOP committees.

"These are bills that the Republican Senate passed 92-6," Hoyer said. "There's an opportunity for every American to see who wants government open, and our responsibility is not to do what the president of the United States tells us to do."