Accessibility links
'Hollywood's Eve' Feeds Renewed Interest In L.A. 'It' Girl Turned Writer Eve Babitz had long been forgotten, when a profile by Lili Anolik triggered a reissuing of the former Hollywood glamour girl's literary works. In a new book, Anolik fills some, but not all, the gaps. 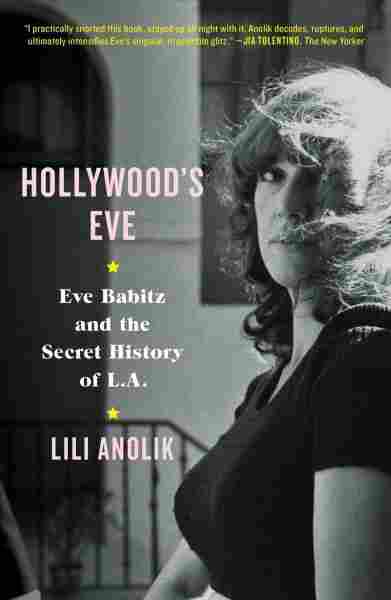 Eve Babitz and the Secret History of L.A.

In March of 2014, when Lili Anolik's Vanity Fair profile of Eve Babitz was published, all of Babitz's books were out of print. Her name, like the names of many writers, had mostly been forgotten.

Then, a resurgence. Thanks to a handful of publishers, all but one of Babitz's books have been reissued over the last few years. Each was met with a wave of praise and, in the case of The New York Times, a mea culpa which sought to right the wrong of dismissing her writing the first time around. As critical praise built for her work, interest in her life built, too.

Anolik's book, Hollywood's Eve has come to fill the void. Anolik starts by stating clearly that her biography is a love story. "The lover, me. The love object, Babitz," she writes in the introduction. Admirers of Babitz's work will appreciate that Anolik comes out saying exactly what she means. Hollywood's Eve proceeds under these terms until the final pages, in ways both those seduced and repelled by this idea will anticipate.

Anolik tackles Babitz's life mostly chronologically and so the beginning of the book is full of Hollywood glitz and juicy, have-to-tell-someone-else anecdotes from her 1960s and 1970s prime, when she was Hollywood's "it" girl. Here's one: Babitz gave Steve Martin the idea to wear his iconic white suit. She tried to get The Eagles to do it as well but "they wouldn't listen." Or there is the letter she sent to Joseph Heller along with her novel manuscript. Anolik notes that in recounting the letter from memory, Babitz and another source, a friend, differ slightly in the exact content — but both versions are dynamite. In one recollection, Babitz writes, "I am a stacked eighteen-year-old blonde on Sunset Boulevard. I am also a writer." In the other account, she writes, "I'm sitting on a bench in a wet bathing suit. I've written a novel. I'm eighteen." The mystery about which is real, Anolik rightly notes, only adds to the appeal.

During these sections, Anolik writes with great insight and restraint. At times, it reads like an annotated oral history. Babitz, her peers, and her friends are quoted at length and without interruption to tell their own stories. In these instances, it's clear that their voices are better than an interlocutor's would be. At other times, Anolik's interventions are vital and clarifying. At just the right time, she notes "[a] thing about Eve I've learned: though she never lies, she's not always to be believed. " There are many times throughout the book when this observation feels like something of a skeleton key.

Much of what makes the book wonderful in its first half, unfortunately, falls away when the focus is on the more recent years of Babitz's life — she's now 75 — especially in the period where Anolik knows her personally. She still gives the details: After suffering severe burns in a fire in the late 90s, she became more reclusive. She now lives alone in a messy apartment, always listening to one of Los Angeles's conservative talk radio stations. According to her sister, Babitz turned to the right after the Sept. 11 attacks. This, Anolik suggests, has lost Babitz a lot of friends, though she plays it off with a joke about her own willingness to listen to Babitz talk about wanting a shirt "the same shade of blue as Melania Trump's eyes." It seems more likely that Babitz's alienation is because, as Anolik observes, "Forming an emotional bond is beyond Eve at this point." Past this, a full picture of Babitz's present-day life never becomes clear. This fits with the frame from the introduction of Hollywood's Eve, though it's hard not to feel this hole when so much information seems obscured.

This extends to when Anolik shifts the focus to Mirandi Babitz, Eve's sister, who was sexually assaulted numerous times. These incidents are not handled with the attention or seriousness that they deserve. Especially given Anolik's facility for clear and forceful prose, that she finishes describing a night on which Mirandi Babitz was raped by writing "a more or less good time was had by all" is frustrating and confusing.

Anolik's biography, as a whole, is much more its successes than it is its failures. Down the road, Babitz's readers will surely be treated to a biography of her from a more disinterested party. Until then, they — and anyone interested in Hollywood in the 1960s and 1970s — will be more than nourished by Hollywood's Eve.

Read an excerpt of Hollywood's Eve

Bradley Babendir is a book critic and fiction writer living in Cambridge, Massachusetts. He can be found on Twitter at @therealbradbabs.