Accessibility links
Shutdown Shutters Many D.C. Tourist Attractions — But Not The One In Trump's Hotel Unlike other National Park Service properties, the clock tower above the Trump International Hotel is open and staffed by park rangers. Government officials insist the arrangement is aboveboard. 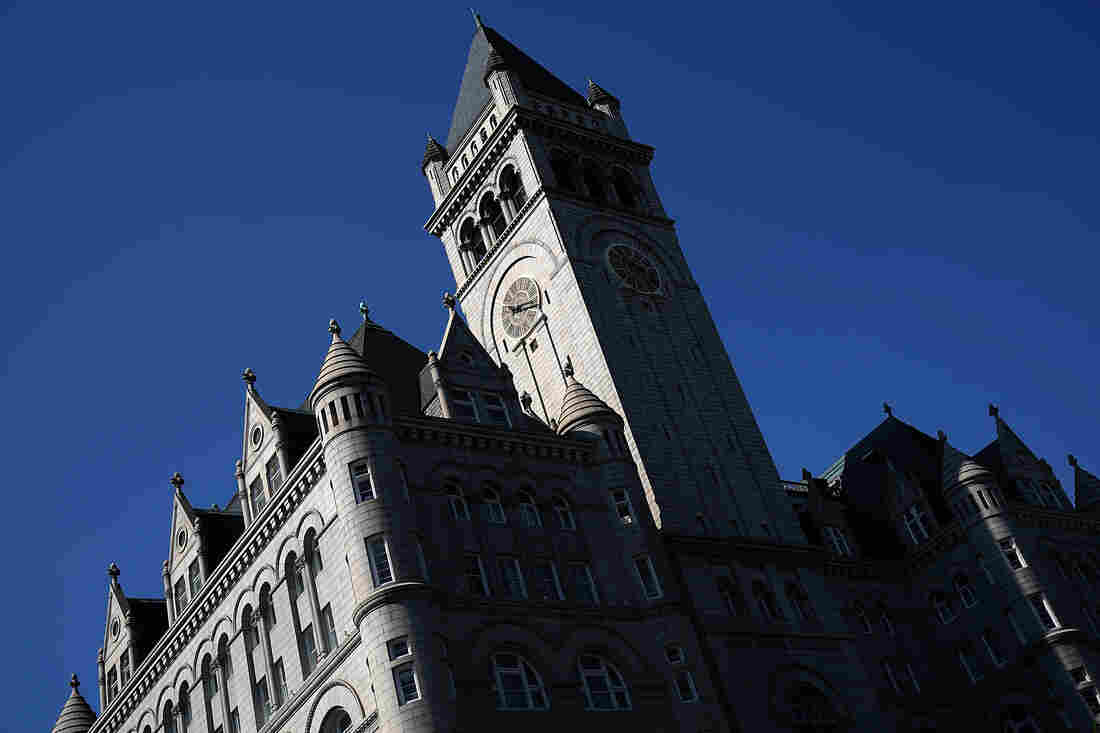 The Old Post Office building's clock tower. The Trump International Hotel is also located in the Old Post Office. During the current government shutdown, the clock tower, which is run by the National Park Service, has remained open even as other parks have closed, again raising questions about the intermingling of President Trump's business interests with the federal government. Win McNamee/Getty Images hide caption 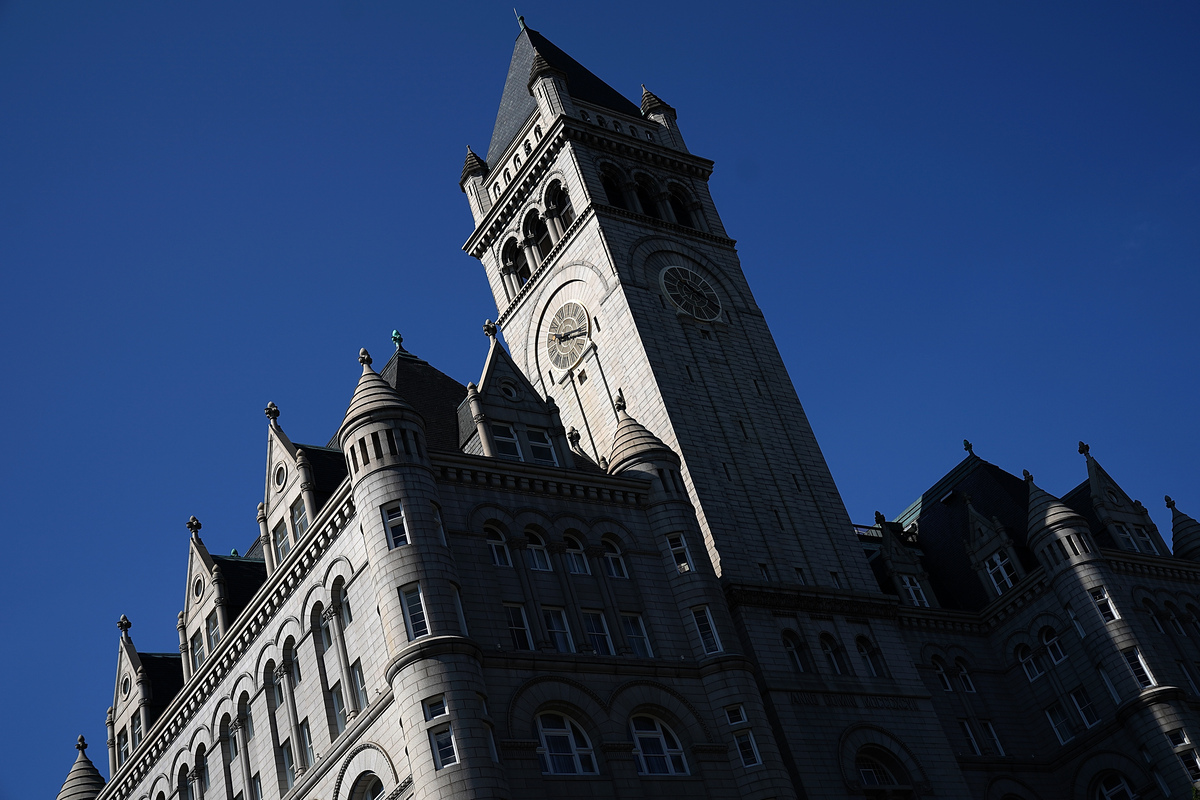 The Old Post Office building's clock tower. The Trump International Hotel is also located in the Old Post Office. During the current government shutdown, the clock tower, which is run by the National Park Service, has remained open even as other parks have closed, again raising questions about the intermingling of President Trump's business interests with the federal government.

The government's partial shutdown has turned Washington's National Mall into a bleak place. Trash cans are overflowing, museums and historic sites are shuttered. Park Service rangers and Smithsonian employees are furloughed as the shutdown drags on.

One of the very few government-owned tourist attractions that's still open is just a few blocks away, in the clock tower of the historic, 1899-vintage Old Post Office building. Three park rangers are on duty, guiding visitors up two elevators and onto an observation deck that provide dramatic views of downtown Washington. There's also a historic set of bells that ring regularly.

The Old Post Office is owned by the federal government, which leases the building to the Trump International Hotel, itself operated by President Trump's Trump Organization. And once again, Trump's stake in that hotel is controversial.

A lawsuit making its way through the courts alleges that Trump is violating anti-corruption clauses of the Constitution whenever the hotel does business with foreign and state governments. Lobbyists and political allies frequently hold events at the hotel. And there are questions about whether Trump personally intervened in plans to replace the FBI headquarters, which sits across the street from the hotel, in order to protect his business interests.

For Democrats and ethics watchdogs, the clock tower's continued operation during a government shutdown has raised new questions about whether Trump's business interests are getting an unfair boost from the government he sits atop of.

A handful of tourists visited the clock tower Wednesday morning. "It feels a little bit weird to be in the Trump hotel," said Sven Moeller, who lives in New Jersey. He laughed, adding, "Yes, it does."

The money to pay for the park rangers comes from the General Services Administration, the agency responsible for most federal office space.

When the federal government shut down on Dec. 22, the rangers were furloughed without pay. But speaking on background, a GSA official said the agency then found some money to pay the rangers' salary. Although the GSA was partially shut down and National Park Service was officially closed, they signed an agreement and the rangers returned.

GSA has said the agreement was "unrelated to the facility's tenant," referring to the Trump hotel.

"Boy, do I have a lot of questions," Rep. Betty McCollum, D-Minn., told NPR. As incoming chair of a House subcommittee that oversees the National Park Service, she said the agreement seems to benefit the president's business.

"The fact that it's a short-term agreement, the fact that it was a scramble to do it during a government shutdown, just has all the makings of, you know, why did this happen? Is it legal? Is it ethical?" she said. 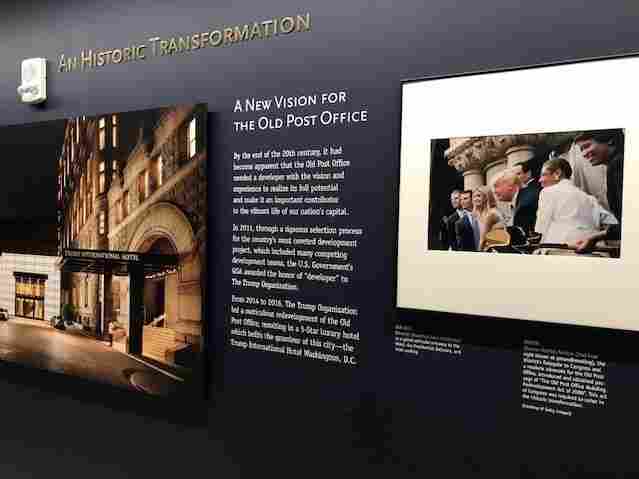 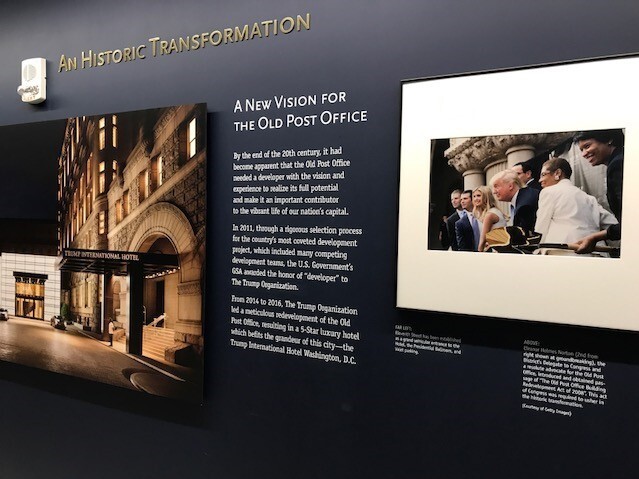 A photo in the exhibition section of the clock tower of Washington, D.C.'s Old Post Office, which also houses the Trump International Hotel.

The clock tower is reached through a special door at the back of the hotel. The tower-only elevator is at the end of long corridors decorated with historical exhibits about the District of Columbia and the Old Post Office building. In one panel, George Washington is depicted choosing the site of the capital city; in another, Ivanka Trump inspects blueprints for the hotel conversion. A tiny souvenir shop sells Trump chocolates, Trump hoodies but no campaign items.

Two watchdog groups have filed Freedom of Information requests for documents about the agreement. "Were there communications between the White House and these agencies about whether this facility should be opened up?" asked Noah Bookbinder, executive director of Citizens for Responsibility and Ethics in Washington, one of the filers. "What was the legal basis?" he asked. "What was the thinking?"

The White House and the Trump Organization didn't reply to NPR's requests for comment.

Visiting from Sydney, Australia, Jeremy Stein was just happy the clock tower was open. "You know, politics will sort itself out," he told NPR. "But once you're at the top there, you get to enjoy a nice view. So you can't really complain about that."