Accessibility links
Where Does Illegal Immigration Mostly Occur? Here's What The Data Tell Us The Trump administration says there is a national security crisis at the Southern border. But most people in the country illegally didn't sneak across the border; they overstayed their visas.

Where Does Illegal Immigration Mostly Occur? Here's What The Data Tell Us

Where Does Illegal Immigration Mostly Occur? Here's What The Data Tell Us 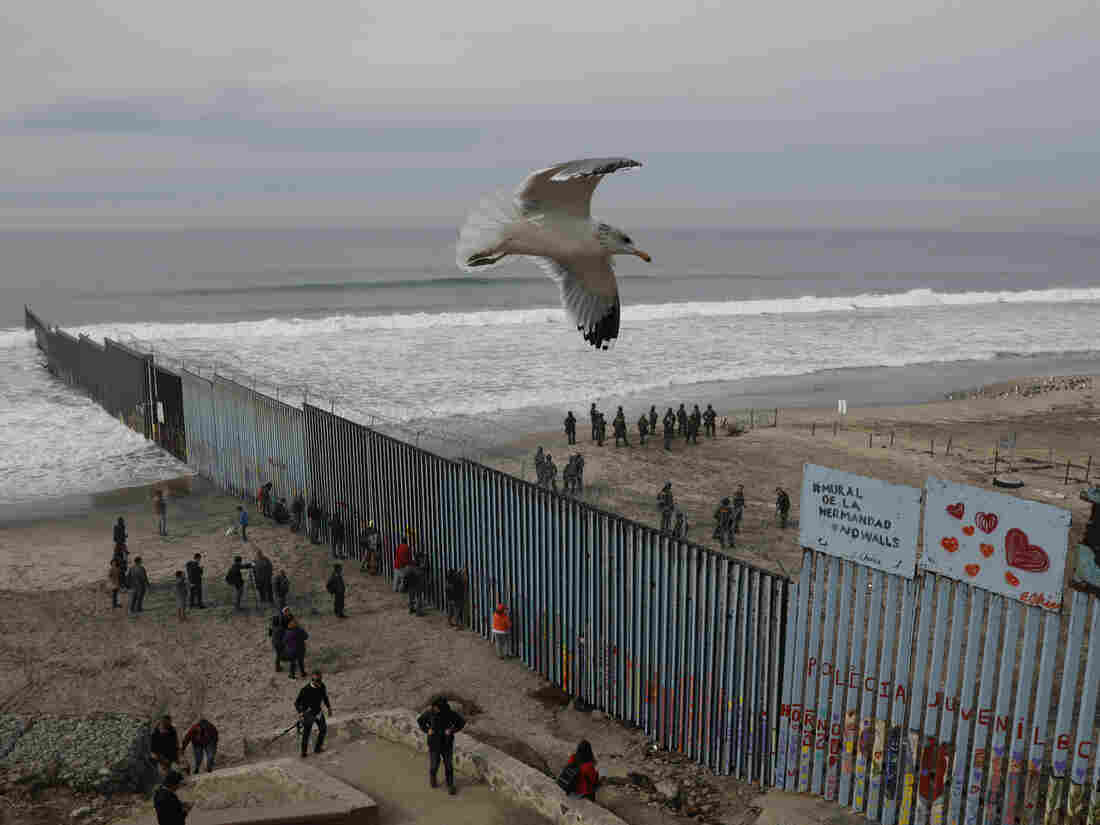 The westernmost edge of the U.S. border wall separates Tijuana from San Diego. Most undocumented immigrants in this country did not enter the U.S. at the Southern border. Rebecca Blackwell/AP hide caption 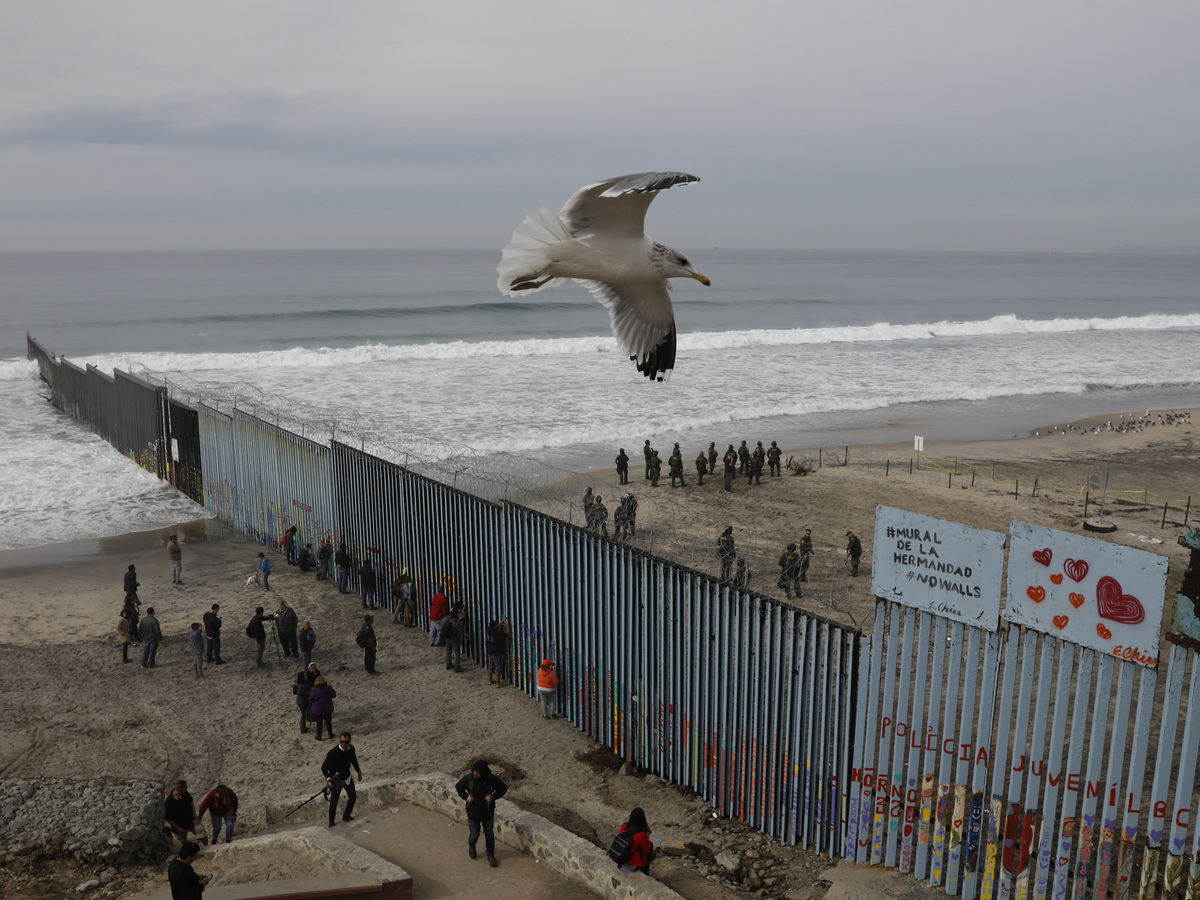 The westernmost edge of the U.S. border wall separates Tijuana from San Diego. Most undocumented immigrants in this country did not enter the U.S. at the Southern border.

Most undocumented immigrants didn't enter this country through Tijuana, where news cameras have captured images of thousands of immigrants seeking refuge during recent months.

And they didn't enter near the border town of McAllen, Texas, which the president visited Thursday during the 20th day of a partial government shutdown fought over constructing additional barriers on the Southern border.

When it comes to people in the country without proper documentation, the majority of them didn't cross the Mexican border at all. Most of them came to the United States legally — but then don't leave.

About 700,000 travelers to the United States overstayed their visas in fiscal 2017, the most recent year for which the Department of Homeland Security has published figures. DHS estimated that, as of Sept. 30, 2017, the end of that fiscal year, more than 600,000 of those travelers were still in the U.S.

During that same year, there were just 300,000 apprehensions along the Southern border, according to Customs and Border Protection — the lowest number since 1971.

Visa overstays have outnumbered people who enter the country illegally at the Southern border every year since 2007, according to a report by the Center for Migration Studies. The report's authors estimate that the number of total visa overstays was 600,000 more than the total number of border crossers and that in 2014, visa overstays accounted for two-thirds of all new undocumented immigrants.

Immigrants traveling through Mexico, of course, take up much of the public's attention on the issue of illegal immigration. And they do account for almost all people apprehended by CBP, which includes the Border Patrol. (Immigration and Customs Enforcement largely works in the interior of the country.)

Those caught by the U.S. government can apply for asylum if they can claim a credible fear that their lives would be in danger by returning to their home countries; some immigrants, in fact, turn themselves in to federal agents to do so. Apprehensions of people attempting to cross the border illegally, however, far outnumber the number of people requesting asylum at the border.

The agency catches the highest number of undocumented migrants in the Rio Grande Valley sector of south Texas. This includes McAllen, where the president visited on Thursday.

In fiscal 2018, CBP apprehended 162,000 people in the Rio Grande Valley. None of the eight other Border Patrol sectors on the Southern border had even half of that activity.

In the last fiscal year, 8 percent of all apprehensions came from this area, which consists of New Mexico and a small portion of West Texas, including the city of El Paso. But in October and November of 2018 — as apprehensions in general ticked up — that area's share doubled.

The majority of that growth in the El Paso area has been from apprehensions of what CBP calls "family units." During those two months, the agency reported that almost three-quarters of all people caught there were traveling with family members.

"What we've been seeing over the past few months is a dramatic increase in families and kids," Andrew Meehan, CBP's assistant commissioner for public affairs, told NPR. "You have Border Patrol stations that are largely at capacity and are not equipped to handle the large surge of families and kids that have approached our border."

It is unclear how many of these migrants applied for asylum after arriving in the U.S. — but the total number of asylum cases has been increasing as well.

"A growing percentage of border crossers in recent years have originated in the Northern Triangle states of Central America," wrote Robert Warren and Donald Kerwin of the Center for Migration Studies. "These migrants are fleeing pervasive violence, persecution and poverty, and a large number do not seek to evade arrest, but present themselves to border officials and request political asylum. Many are de facto refugees, not illegal border crossers," the authors wrote.

Does the wall deter crossings?

Despite consistently high apprehensions in sectors that do contain fencing, Homeland Security Secretary Kirstjen Nielsen said at the White House on Wednesday that "everywhere we put up a wall, illegal immigration has been reduced 90 to 95 percent."

Yet, CBP data shows that the number of people that agents have caught has decreased across the board — not just in areas where the government constructed barriers.

Both the El Paso and Rio Grande sectors have physical barriers in place to prevent illegal crossings into the United States. Pedestrian fencing stretches to both sides of the city of El Paso in West Texas, with vehicle barriers along much of the rest of the New Mexico border. In south Texas, pedestrian fencing dots the area around McAllen and expands most of the way from there to the Gulf of Mexico.

The Tucson sector, which covers most of Arizona and is almost completely blocked by vehicle and pedestrian fencing, has seen a recent increase in apprehensions. In fiscal 2018, CBP caught about 52,000 people there, including an estimated 5,000 unaccompanied minors.

The sector of the Southwestern border with the fewest apprehensions, on the other hand, has almost no fencing. The Big Bend sector, starting in West Texas and extending about halfway down the state, is the largest individual sector guarded by CBP. The rough terrain of the mountain ranges and the Chihuahuan Desert make it a difficult place to cross. In fiscal 2018, CBP apprehended just 8,000 people there.

Joel Rose contributed to this report.

An earlier version of this story said the Border Patrol employed more than 23,000 people in 2017, more than double the number in 1993. According to Customs and Border Protection statistics, the Border Patrol actually employed more than 19,000 people in fiscal 2017, nearly five times the number in 1993. In addition, the story said that in fiscal 2018, the Tucson sector apprehended 400,000 people, a quarter of whom were unaccompanied minors. Actually, the CBP reported over 52,000 apprehensions in the Tucson sector in that time, 5,000 of whom were unaccompanied minors.