Accessibility links
Astronomers' New Tool May Help Solve Intergalactic Mystery Fast Radio Bursts are extremely powerful bursts of energy coming from far beyond the Milky Way. No one knows what's causing them but a new telescope in Canada should help find an explanation.

Fast Radio Bursts are extremely powerful bursts of energy coming from far beyond the Milky Way. No one knows what's causing them but a new telescope in Canada should help find an explanation. 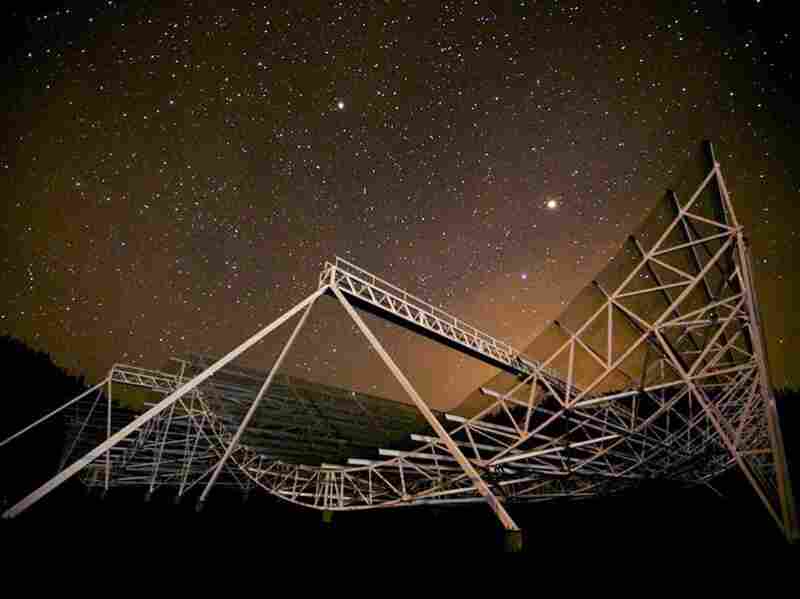 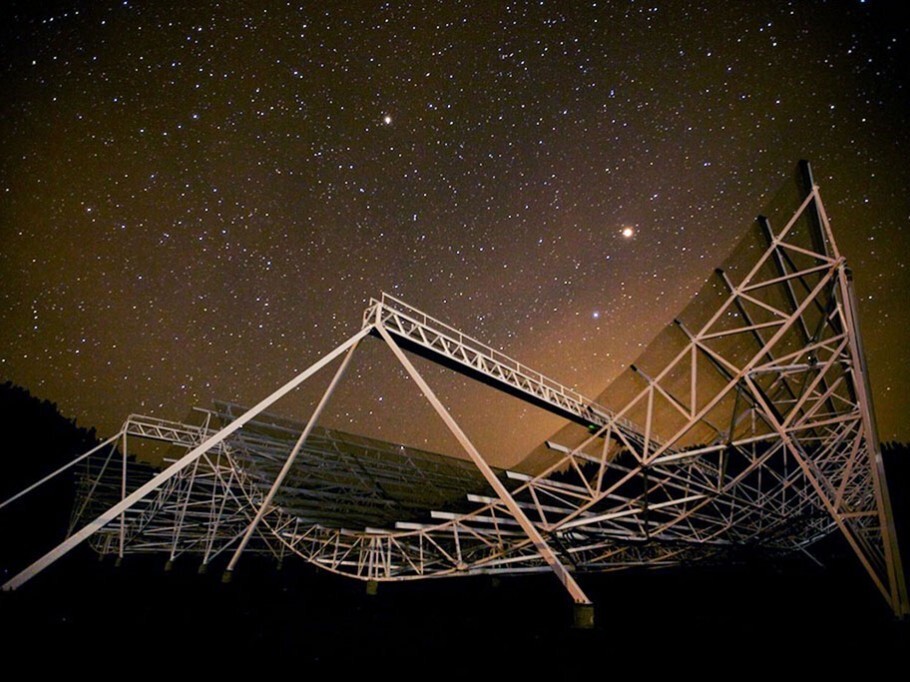 Astronomers have a new tool they hope will help them crack an intergalactic mystery. The mystery is what's causing occasional brief but massive bursts of energy to erupt from galaxies far beyond our Milky Way. The tool is a new radio telescope in Canada called CHIME. NPR's Joe Palca reports.

JOE PALCA, BYLINE: In 2007, scientists reported the first of these peculiar bursts of energy called Fast Radio Bursts. Physicist Victoria Kaspi of McGill University remembers exactly how she and her colleagues felt when they read that first report.

VICTORIA KASPI: We were all shocked. I mean, I had to scrape my jaw off the floor. And we were a little skeptical, too, initially. But we're - now we're definitely believers.

PALCA: The shock came because scientists couldn't explain what would make such a huge amount of energy in such a short space of time - and skeptical because for many years, nobody else could find another one of these bursts. Now as more groups have joined the search, several dozen have been reported. But Kaspi says they're still quite mysterious.

KASPI: When you have something that's only on for a millisecond and you can't predict where or when, it's hard to study it.

PALCA: That's where the new telescope comes in. CHIME is a radio telescope in British Columbia. It's unusual-looking. Instead of a big, steerable dish, it consists of four hundred-yard-long pipes - or actually half-pipes - lying side by side in a North-South orientation. CHIME has one very important property.

INGRID STAIRS: It has a very, very wide field of view. It looks at a large part of the sky all the time.

PALCA: That's Ingrid Stairs. She's a professor of astronomy at the University of British Columbia. Most radio telescopes only see a tiny patch of sky at a time, so the chance of catching one of these Fast Radio Bursts is very small. Stairs says CHIME should spot lots. Indeed, even as they were setting up the telescope last summer, they found 13.

STAIRS: We were taking the machines up and down and changing software and things like that. And we were hoping we might find something, but we were quite happy that we got such a large number of Fast Radio Bursts just like that.

PALCA: One of the Fast Radio Bursts they found seems to be going off repeatedly. Cherry Ng of the University of Toronto says that makes it easier to study.

CHERRY NG: If there's something that repeats and if it's still there the next day, we might - we'll see it again.

PALCA: Seeing it over and over should help explain what's generating it. Ng says there are dozens of theories, and she doesn't have a favorite.

NG: I'm an instrumentalist, so I don't know. I just find them and let the theorists think about it.

PALCA: Most of the theories suggests the Fast Radio Bursts are being generated by something we already know about - spinning neutron stars or a rotating black hole or some interaction of the two. But McGill University's Victoria Kaspi says it could be something scientists have never dreamed of.

KASPI: It absolutely could be something totally new, and we just don't know.

PALCA: So do you find it exciting or frustrating to have these things that you don't really understand?

KASPI: Oh, it's exciting. It's always wonderful to have a new puzzle to work on. It's an absolute joy.

PALCA: Kaspi and her colleagues presented their results from the CHIME telescope at the annual meeting of the American Astronomical Society and in the latest edition of the journal Nature. Joe Palca, NPR News.