Accessibility links
6 Boxes Of Files Related To Mumia Abu-Jamal Case Found In Philadelphia Storage Room Abu-Jamal was convicted of killing a police officer in a racially charged case 30 years ago. The assistant district attorney said her office is reviewing the boxes. 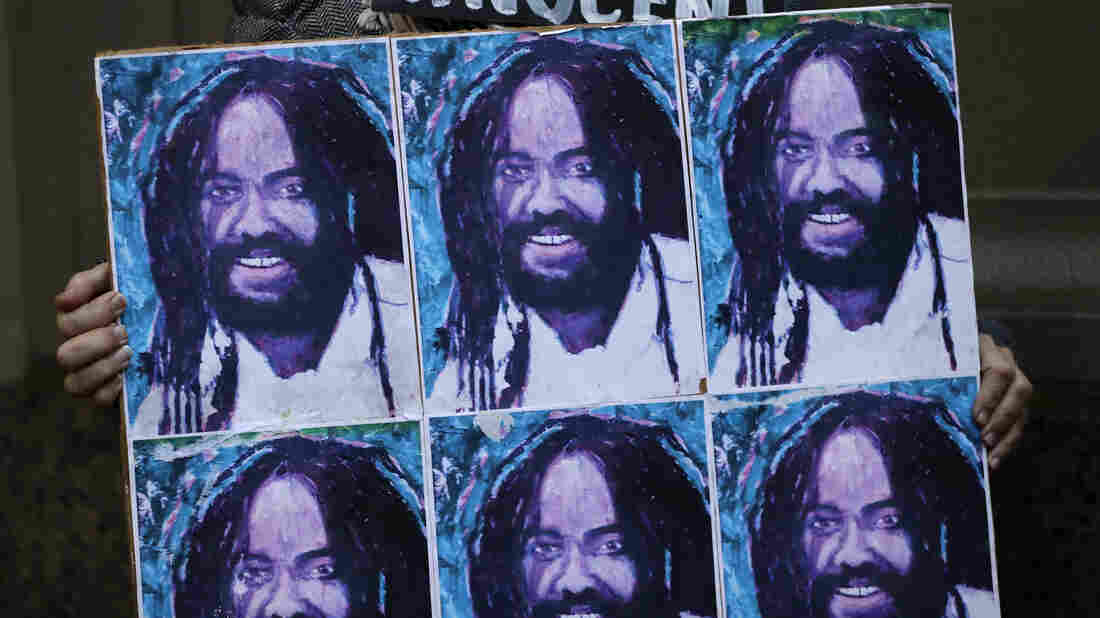 A protestor holds up a poster depicting Mumia Abu-Jamal during a demonstration outside the offices of District Attorney Larry Krasner, Friday, Dec. 28, 2018, in Philadelphia. Matt Slocum/AP hide caption 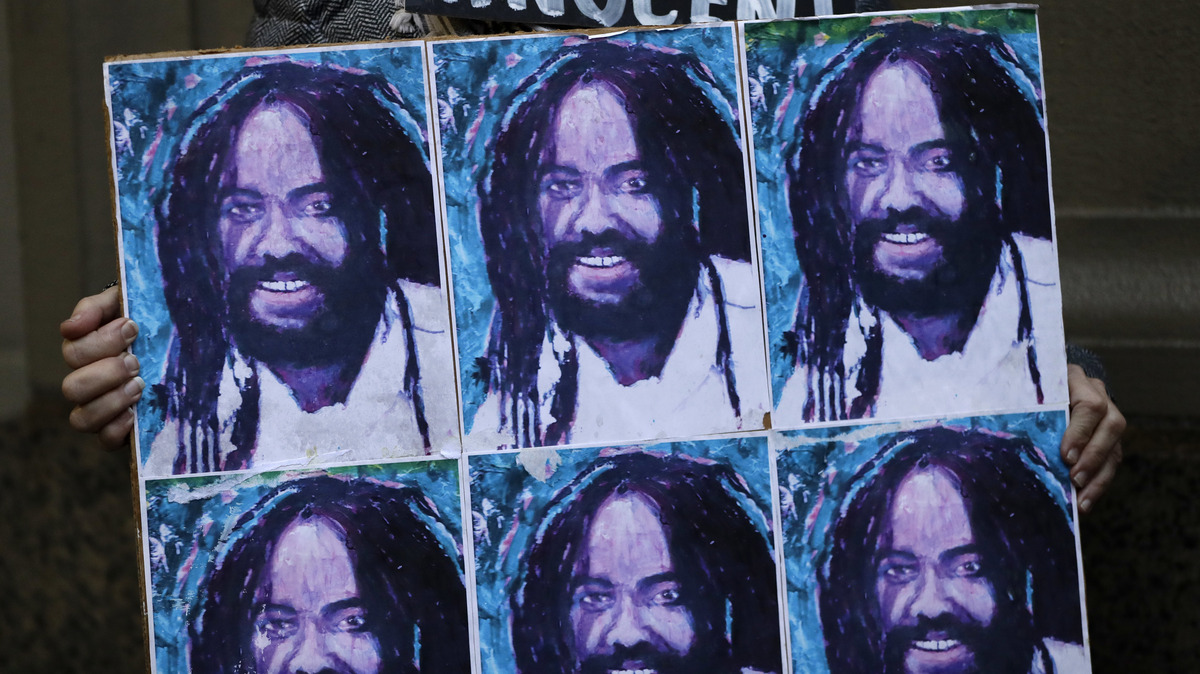 A protestor holds up a poster depicting Mumia Abu-Jamal during a demonstration outside the offices of District Attorney Larry Krasner, Friday, Dec. 28, 2018, in Philadelphia.

Days after Christmas, Philadelphia District Attorney Larry Krasner and some of his assistants went rummaging around an out-of-the-way storage room in the office looking for some pieces of furniture. What they stumbled upon was surprising: six boxes stuffed of files connected to the case of activist Mumia Abu-Jamal. More than 30 years ago, he was convicted of killing a police officer in a racially charged case. He and his supporters have long maintained his innocence.

Five of the six boxes were marked "McCann," a reference to the former head of the office's homicide unit, Ed McCann. Some of the boxes were also marked "Mumia," or the former Black Panther's full name, "Mumia Abu-Jamal."

It is unknown what exactly the files say and whether or not the box's contents will shed new light on a case that for decades has garnered worldwide attention.

But in a letter to the judge presiding over Abu-Jamal's case, Assistant District Attorney Tracey Kavanagh wrote "nothing in the Commonwealth's database showed the existence of these six boxes," she said. "We are in the process of reviewing these boxes."

The surprise discovery comes just weeks after a Philadelphia judge reinstated appeals rights to Abu-Jamal, saying the former radio journalist and activist should get another chance to reargue his case in front of the Pennsylvania Supreme Court due to a conflict-of-interest one of the justices had at the time Abu-Jamal's petition was denied.

Abu-Jamal's supporters are seizing on the mysterious six boxes as proof that his innocence has been systematically suppressed by authorities.

"There's no question in my mind that the only reason they could've been hidden like this is that this is the evidence of the frame-up of Mumia," said Rachel Wolkenstein, who has been a legal advocate and activist for Abu-Jamal for more than 30 years.

"What these missing boxes represent is confirmation of what we've known for decades: there's hidden, exculpatory evidence in Mumia's case, and that is evidence that Mumia's guilt was intentionally manufactured by the police and prosecution and the truth of his innocence was suppressed," Wolkenstein said.

The Philadelphia District Attorney's Office did not say anything about what is in the boxes, or whether there is evidence that the files are exculpatory, or capable of demonstrating that Abu-Jamal did not commit a crime. During his original trial, three separate eyewitnesses testified Mumia did commit the murder of Philadelphia Police Officer Daniel Faulkner.

Wolkenstein's assessment is wild speculation, according to Ed McCann, the former homicide unit chief whose name was scrawled across the six boxes. McCann left the office in 2015 after 26 years there as a prosecutor. He was never directly involved in Abu-Jamal's case.

"I can't tell you 100 percent what is in these boxes," McCann said Wednesday night. "But I doubt there is anything in them that is not already in the public eye."

How and why did six boxes tied to one of the most legendary and racially charged cases the office has ever handled get relegated to a dusty storage room?

McCann is not sure. But he said when the office moved locations in 2006, hundreds of boxes with his name written on them were moved into the current headquarters on South Penn Square, just across the street from Philadelphia City Hall.

"I don't remember these six boxes. But nobody over there discussed this with me before filing this letter," McCann said. "I would think if they were really interested in what happened, they would have reached out to me."

In the two-page letter to the court, assistant district attorney Kavanagh wrote that if Judge Leon Tucker would like to review the boxes, prosecutors will turn them over.

Tucker, who is the same judge who ordered that Abu-Jamal should be given a new appeals argument, has not weighed in on the newly-discovered boxes.

But in his opinion last month, Tucker said former Pennsylvania Supreme Court Justice Ronald Castille should have recused himself from hearing Abu-Jamal's petitions, since Castille himself was Philadelphia's district attorney when the case was actively on appeal. "True justice must be completely just without even a hint of partiality, lack of integrity or impropriety," wrote Tucker, saying a new hearing in front of the state's high court is warranted.

Prosecutors have not taken a position yet on Tucker's opinion. The files unearthed in the six boxes could influence whether Krasner's office supports or opposes a new hearing for Abu-Jamal.

Wolkenstein said the thousands of people who have joined the "Free Mumia" movement around the globe should be able to review the documents themselves.

"These files should be released publicly," Wolkenstein said. "The remedy for this is nothing less than dismissal of Mumia's charges and his release from prison."