Accessibility links
Opinion: Brazil's High Murder Rate Could Get Even Worse If Gun Laws Are Relaxed Brazilians are desperate for public safety, but the president's plan to dismantle firearm legislation is the wrong way to reduce crime, writes security researcher Robert Muggah. 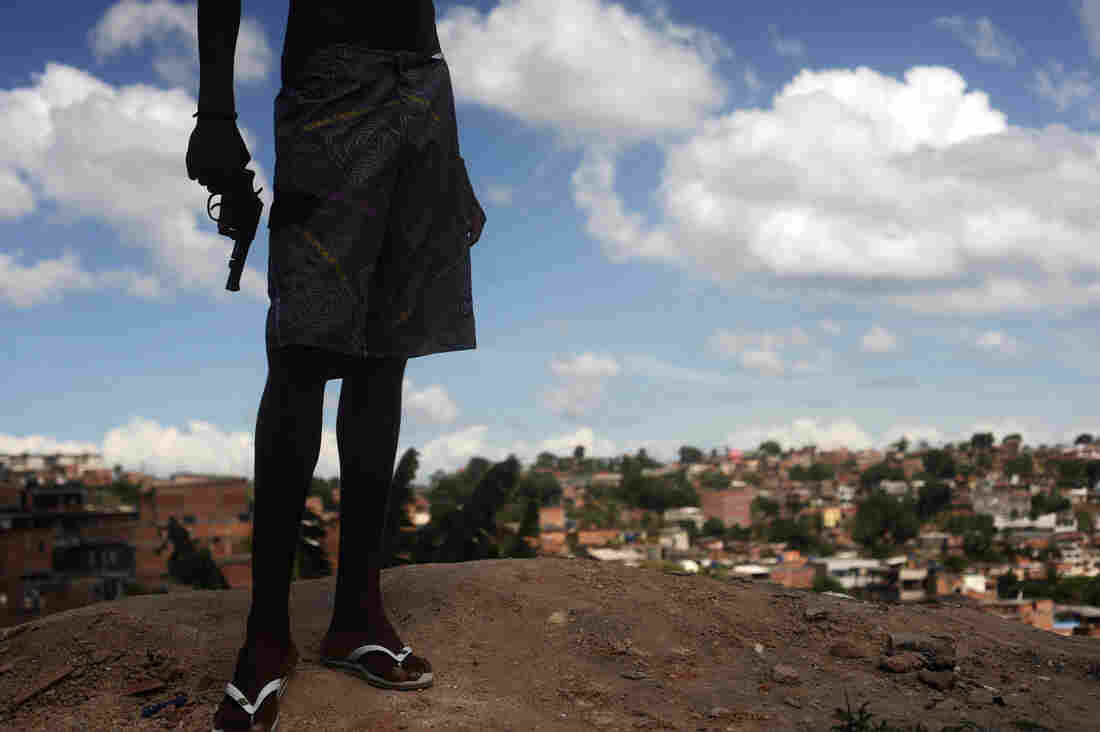 A Brazilian drug gang member nicknamed Giant, 17, poses with a gun atop a hill overlooking a poor neighborhood in Salvador, Brazil, in 2013. Lunae Parracho/Reuters hide caption 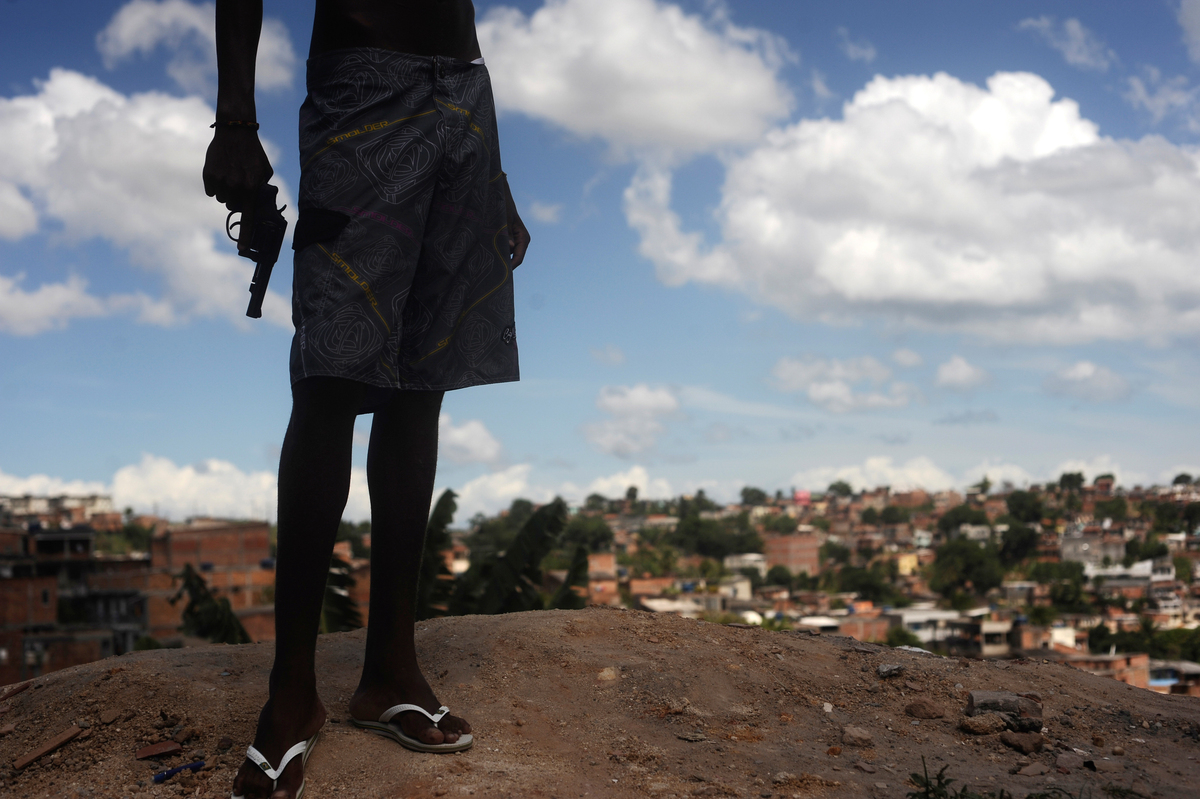 A Brazilian drug gang member nicknamed Giant, 17, poses with a gun atop a hill overlooking a poor neighborhood in Salvador, Brazil, in 2013.

Robert Muggah is the co-founder of the Igarapé Institute, a Brazil-based think and do tank that focuses on security and justice across Latin America, Africa and Asia. He is also co-founder of the SecDev Group, a digital consultancy working in the Middle East, Eurasia and South Asia. He advises governments and business and civil society groups in Latin America and around the world on data-driven and evidence-based security, justice and new technologies.

Brazilians are desperate for better public security, and not without good reason. A record 63,800 Brazilians were murdered in 2017, the latest year for which reliable statistics are available. About 43,000 of them died as a result of firearms, most of which were made in Brazil. This compares to roughly 15,500 gun-related homicides in the United States that same year.

Newly elected Brazilian President Jair Bolsonaro is supremely confident he can reduce violent crime — a core pillar of his election campaign. But his proposal to dismantle national gun laws is precisely the wrong way to go about doing this.

On paper at least, Brazil has comprehensive gun legislation. In 2003, the country passed a disarmament statute that, among other things, introduced a set of common-sense restrictions for gun ownership. For example, it permitted ownership but set a minimum age for gun possession at 25 and included mandatory background checks and requirements to renew licenses every five years. The statute suffered a major setback, however: It was never fully enforced.

Robert Muggah: How Are Some Fragile Cities Tackling Their Worst Problems?

Instead, over the past decade, the Brazilian authorities adopted a fragmented approach to controlling firearms. Government agencies never properly registered the weapons and only weakly enforced key provisions of the statute. Federal and state-level police and armed forces seldom coordinated their efforts to investigate gun-related crime occurring at the borders or across the territory. As a result, gun trafficking, leakage and crime did not fall nearly as much as expected.

From the moment the disarmament statute passed into law, it came under assault from lawmakers. President Bolsonaro, then a federal congressman, was among its most ardent assailants. He was a key leader of the so-called bancada da bala, or "bullet caucus" — a group of pro-gun politicians funded by Brazil's defense industry and hell-bent on dismantling Brazil's firearms laws. The caucus has long drawn inspiration from America's National Rifle Association, having benefited from the U.S. gun lobby's help to beat back an unsuccessful attempt to ban handguns in Brazil in 2004. 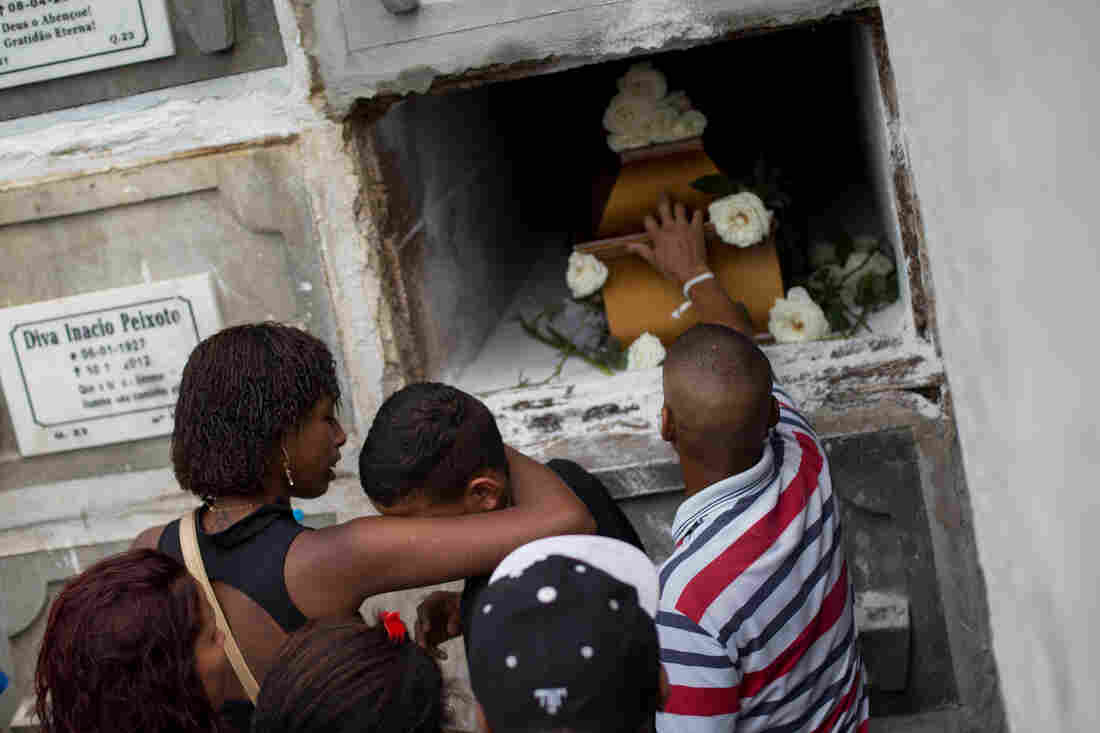 Relatives and friends of Eduardo Felipe Santos Victor, a teenager who was shot dead in Morro da Providencia, a low-income favela community, mourn during his funeral in Rio de Janeiro, on Sept. 30, 2015. Silvia Izquierdo/AP hide caption 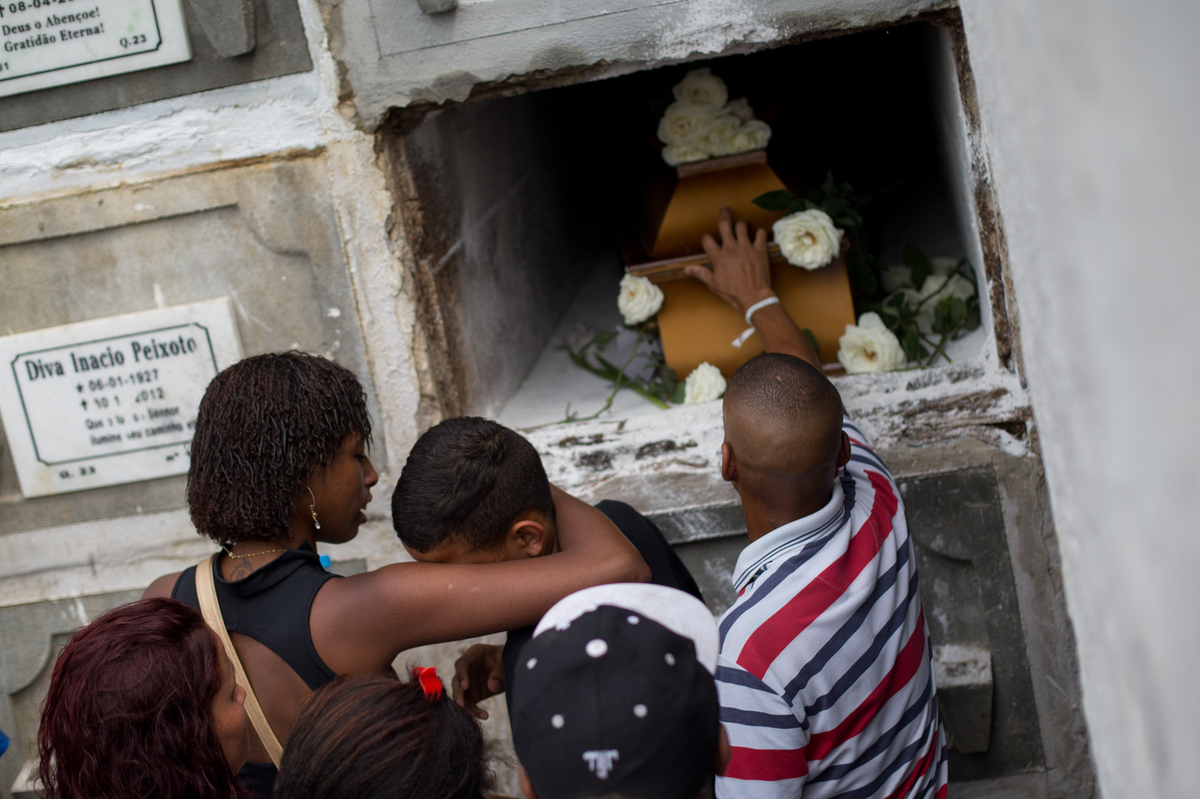 Relatives and friends of Eduardo Felipe Santos Victor, a teenager who was shot dead in Morro da Providencia, a low-income favela community, mourn during his funeral in Rio de Janeiro, on Sept. 30, 2015.

A core goal of President Bolsonaro and the bullet caucus is to liberalize gun laws and expand citizens' right to carry firearms on the street. Back in 2012, the caucus, including then-legislator Bolsonaro, proposed bill 3722 that advocated precisely this. While supported by Brazil's pro-gun lobby and powerful gun industry, the legislation runs counter to calls across the U.S. and most other countries such as Australia, Canada, Germany and the United Kingdom to tighten firearm laws.

Not surprisingly, President Bolsonaro and the bullet caucus are determined to skewer the statute and drastically expand access to weapons and ammunition. This week he is expected to pass a decree that will make it easier for citizens to access firearms and do away with license renewal processes. President Bolsonaro is also expected to campaign aggressively for bill 3722, especially its provisions allowing the right to carry and expanding the number of firearms entitled to citizens (currently capped at six). These efforts will meet resistance from center- and left-leaning politicians, but could very well pass.

Rather than dismantle gun legislation, Brazil's decision-makers should be making every effort to enforce existing rules. After all, the country's new justice and public security minister, Sergio Moro, has a broad mandate to reduce corruption, organized crime and lethal violence. There are good reasons to believe that ramping up the enforcement of the statute could make his job easier. By contrast, expanding access to and availability of firearms is tantamount to pouring gas on a raging fire.

Brazil Has Thousands Of Murders, And It May Relax Gun Laws

There are several reasons why arming citizens is a bad idea. Virtually without exception, more guns equals more violence. Studies from the U.S. and around the world consistently show increases in firearm ownership and carrying are positively correlated with increases in homicide and suicide. In Brazil, a 1 percent rise in firearm availability increases the homicide rate by 2 percent. Brazilian households with firearms had at 44 percent higher risk of homicide than those without.

What is more, there is virtually no evidence to support the idea that expanding access to firearms increases individual safety and security. In the U.S., for example, jurisdictions with weak gun legislation related to purchasing, ownership and carrying feature statistically higher levels of aggravated assault, robbery, rape and murder. Not surprisingly, the diffusion of firearms in Brazilian cities has no empirical effects on reducing property crime. The idea that a "good guy with a gun" will improve personal security in Brazil is fiction.

Many pro-gun arguments rely on sensationalist anecdotes rather than scientific facts. The truth is that robust firearm laws, when enforced, can help deny access to guns to people who should not have them.

The debate today is not whether or not there ought to be rules to regulate firearms, but rather how comprehensive they should be. This is the minimum to ask of citizens who, ultimately, have the privilege — and not the right — to own firearms.

Brazil already registers among the highest per-capita homicide rates in the world and features the largest absolute number of gun deaths on the planet. What is more, a majority opposes loosening gun restrictions. In December 2017, a Datafolha survey found that over 61 percent of Brazilians said that gun ownership should be prohibited. Surprisingly, 59 percent of the respondents who also supported then-candidate Bolsonaro opposed proposals designed to make firearms more accessible.

Gun violence imposes an extreme economic burden on all citizens. In Brazil, a 2006 estimate put the costs of medical bills and lost productivity due to firearm deaths at $10 billion, nearly 1 percent of the country's gross domestic product that year. A more expansive assessment released by the Brazilian government in 2018 determined that the economic burden of violence was potentially dramatically higher: $77 billion per year, more than 4 percent of GDP.

Gun violence not only leads to more deaths and injuries, but also undermines public services, discourages investment, decreases property values and contributes to brain drain. Proposals to loosen firearm legislation are a major step backward for the world's most murderous country.