Accessibility links
"Groveland Four" Pardoned 70 Years After Accusations Of Rape The new governor said the arrests and trials, and in two cases the killings, of the Groveland Four were unjust. Families of the men had worked for the pardons. The accuser maintained she did not lie. 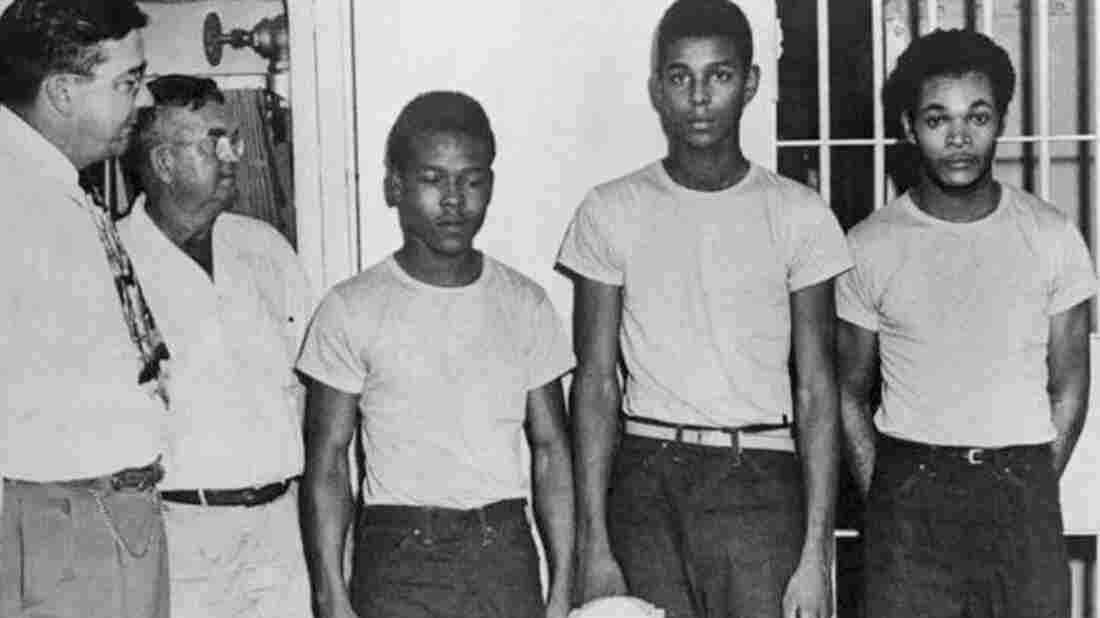 (From left) Lake County, Fla., Sheriff Willis McCall and an unidentified man stand next to Walter Irvin, Samuel Shepherd and Charles Greenlee. The three were accused of rape in 1949, along with a fourth man. They were all pardoned Friday. State Library and Archives of Florida via AP hide caption

toggle caption
State Library and Archives of Florida via AP 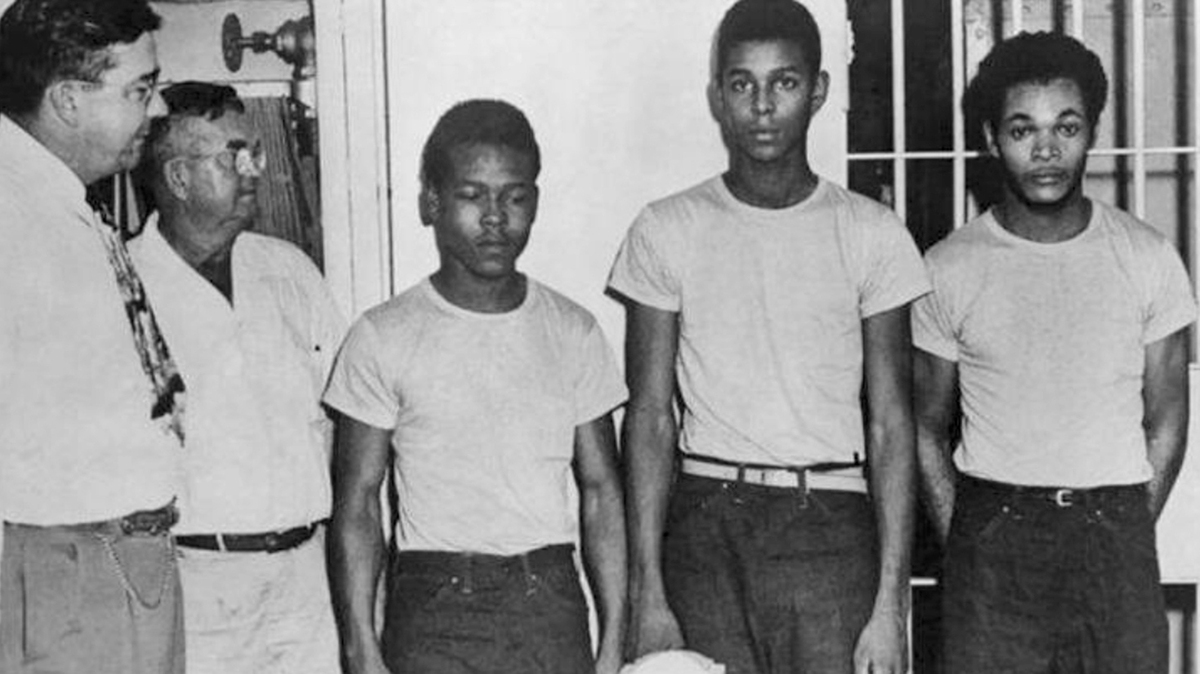 (From left) Lake County, Fla., Sheriff Willis McCall and an unidentified man stand next to Walter Irvin, Samuel Shepherd and Charles Greenlee. The three were accused of rape in 1949, along with a fourth man. They were all pardoned Friday.

State Library and Archives of Florida via AP

Seven decades after being accused of raping a white woman, four African-American men were posthumously pardoned on Friday by the state of Florida.

The pardons of Samuel Shepherd, Walter Irvin, Charles Greenlee and Ernest Thomas – known as the Groveland Four — follow a long, violent story that had become symbolic of racial injustice in the state, and in Jim Crow America.

"Make no mistake, these men were victims," DeSantis said last month. In a statement released Friday, he explained that the "four men have had their history wrongly written for crimes they did not commit."

That history began in 1949, in the heart of Florida, on a dead-end rural road outside the town of Groveland. Norma Padgett, then 17 years old, told police she was abducted and raped by four black men after her car broke down.

Greenlee, Irvin and Shepherd were charged, imprisoned and beaten that night in the basement of a county jail. Shepherd's family home was burned to the ground by an angry mob.

Thomas, also blamed for the alleged crime, escaped into the surrounding swamps where he was "hunted for more than 30 hours ... by an armed, deputized posse of approximately 1,000 men with bloodhounds," according to a detailed apology offered to the men by state legislators in 2017. Thomas was shot dead before being either charged or tried.

Greenlee, who was 16 at the time, was sentenced to life in prison by an all-white jury. Irvin and Shepherd, both World War II veterans, were sentenced to death.

Their capital case was appealed to the U.S. Supreme Court, which ordered a retrial. But before the second trial could begin, they were attacked again. Lake County, Fla., Sheriff Willis McCall, who would later say he was acting in self-defense, drove the two handcuffed men into the countryside and shot them. Irvin was wounded, Shepherd died on the spot.

At his next trial, Irvin — who was represented by future U.S. Supreme Court Justice Thurgood Marshall — was sentenced to death again. Several years later, that sentence was commuted to life in prison. He died in 1969, just one year after being released on parole. Greenlee was released from prison in 1962 and lived until he was 78 in 2012.

At the Friday meeting of the Florida Board of Executive Clemency in Tallahassee, Padgett spoke publicly for the first time about the case, according to the Orlando Sentinel. The 86-year old did not retract her allegations.

"I'm begging y'all not to give the pardons because they did it," Padgett said. "If you do, you're going to be just like them."

The former governor of Florida, Rick Scott, had rejected calls to pardon the men, even as the state legislature, Lake County and city of Groveland issued apologies to the men and their families. But DeSantis, who promised the pardons during his campaign for office, called their cases "a miscarriage of justice."

Greenlee and Padgett's estranged husband – who was with her the night of the alleged rape – both denied that Greenlee had ever met his accuser. Later, a criminologist told a court that he thought law enforcement officers had manufactured forensic evidence in Irvin's case.

The Groveland Four were a centerpiece of the book Devil in the Grove, which won the Pulitzer Prize in 2013 and helped bring their story into the national spotlight.

On Friday, family members of the men spoke directly to Padgett. Greenlee's son, Thomas, said her accusation, and the subsequent arrest of his father, resonated throughout his own life.

"He wasn't there for birthdays. He wasn't there to help with homework. He just was not there," Thomas Greenlee said. "You put someone into a situation where you not only affect him, but the whole family."