Accessibility links
LA Teacher Strike Scheduled For Monday; New College Hunger Findings Teachers in the nation's second largest school district have been working without a contract for over a year; and a new report finds the government could do more to address hunger on college campuses. 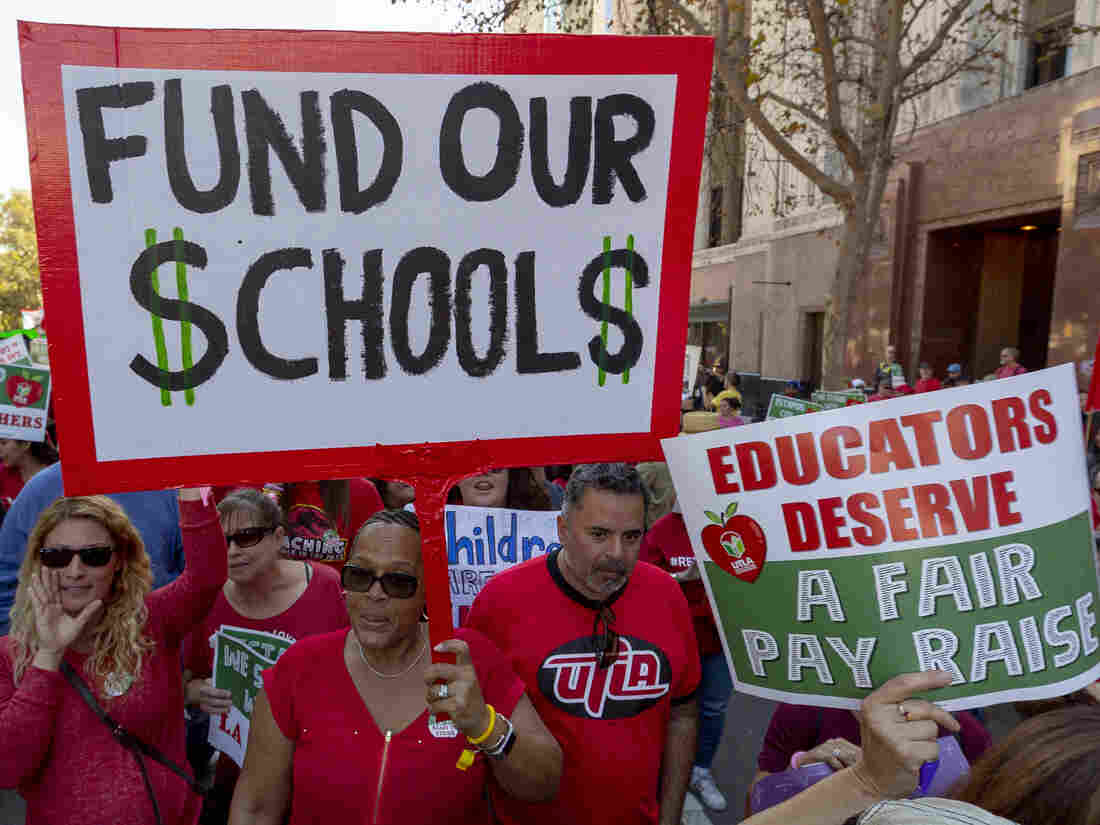 Teachers in the nation's second-largest school district will go on strike on Monday if there's no settlement of its long-running contract dispute. Damian Dovarganes/AP hide caption 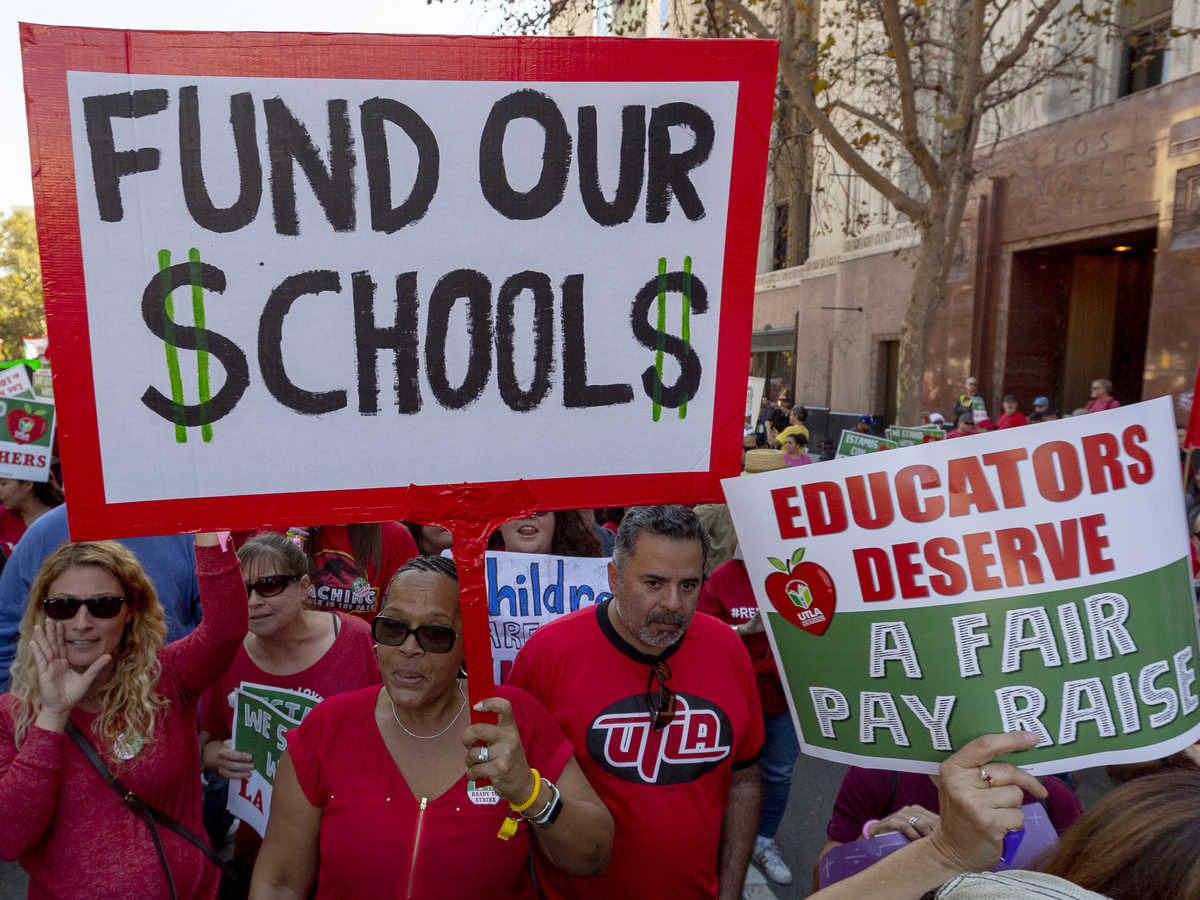 Teachers in the nation's second-largest school district will go on strike on Monday if there's no settlement of its long-running contract dispute.

'On Monday we will be ready to strike'

Los Angeles is bracing for a teacher strike, which could affect roughly 480,000 public school students.

On one side is the LA Unified School District; on the other, United Teachers Los Angeles, a union of more than 30,000 members who have been working without a contract for over a year.

On Thursday, California Gov. Gavin Newsom unveiled a new budget proposal that included more funding for public education. After the Democratic governor's announcement, LAUSD increased its offer. But on Friday, the union said it wasn't enough. It's holding out for smaller class sizes, and more nurses, librarians and counselors, among other things.

Los Angeles Teacher Strike Could Be Days Away

'I'm A Little Stressed': LA Teachers And Parents Brace For A Possible Strike

With no negotiations planned for the weekend, a Monday strike looks likely.

In event of a strike, the district says schools would remain open for the same hours, with the same before- and after-school programs. It has also said that student learning will still take place, with plans to staff schools with administrators, volunteers and 400 newly hired substitute teachers.

In his State of the City speech, New York City Mayor Bill de Blasio announced –among other things – a new initiative to provide prescription glasses to kindergartners and first graders who needed them. And the kids will be seeing in style. The mayor said the glasses would come from a partnership between the city and the company Warby Parker. The plans is to give out 33,000 new pairs of eyeglasses. Through a similar program, they city distributed almost 26,000 glasses throughout 224 community schools last year.

Report: College Students Are Hungry And Government Programs Could Do More To Help

A new report from the Government Accountability Office reviewed 31 studies on the topic of food insecurity on college campuses. The report had two major findings: A third of college students don't always have enough food to eat, and the federal government could be doing more to help. Since the federal government doesn't collect data of food insecurity among college students, GAO used the 31 studies to make their conclusion.

According to the report, almost 2 million students in 2017, who were eligible for aid through the federal Supplemental Nutrition Assistance Program, didn't receive benefits. One policy analyst who spoke to NPR described the SNAP program as "confusing and cumbersome" and "feels like a very large lift, not only for students to understand it but post-secondary institutions."

The Broward County School District plans on installing 116 new cameras throughout 36 schools. A spokesperson for the school district told the Sun Sentinel that the cameras would not have facial recognition software per se, only artificial intelligence that "recognizes the movements and characteristics of people and vehicles."

The security plan would cost roughly $621,000, according to the Sun Sentinel. A large chunk of the money would come through a grant from the U.S. Department of Justice, which will need approval from the county first.

Up until this point, the evidence has been anecdotal but new research finds that stories of increased bullying are confirmed by student surveys – at least in the state of Virginia.

They found that, in the 2017 responses, there were higher rates of bullying and certain types of teasing in areas where voters favored Donald Trump over Hillary Clinton in the 2016 election. In 2015, the data showed that there was no meaningful difference.

The researchers wanted to make it clear that their findings do not conclude that President Trump's election caused an increase in bullying. Instead, they found a correlation between voter preference and bullying, and they observed teasing across one state.

In an August report, Prince George's County Public Schools reported that 80 percent of the district's students were chronically absent. This week, we learned that's not the case.

The number is actually closer to 29 percent. This changed Maryland's ranking from number one state with most chronically absent students to number 10. Prince Georges County is also predominantly African American, so the correction changed national numbers for black student absence, from 29.1 percent to 19.6 percent.