Accessibility links
New York Sen. Kirsten Gillibrand Announces 2020 Presidential Run Gillibrand joins a growing field of Democratic candidates, telling TV host Stephen Colbert on Tuesday that she is launching an exploratory committee and explaining why she has decided to run. 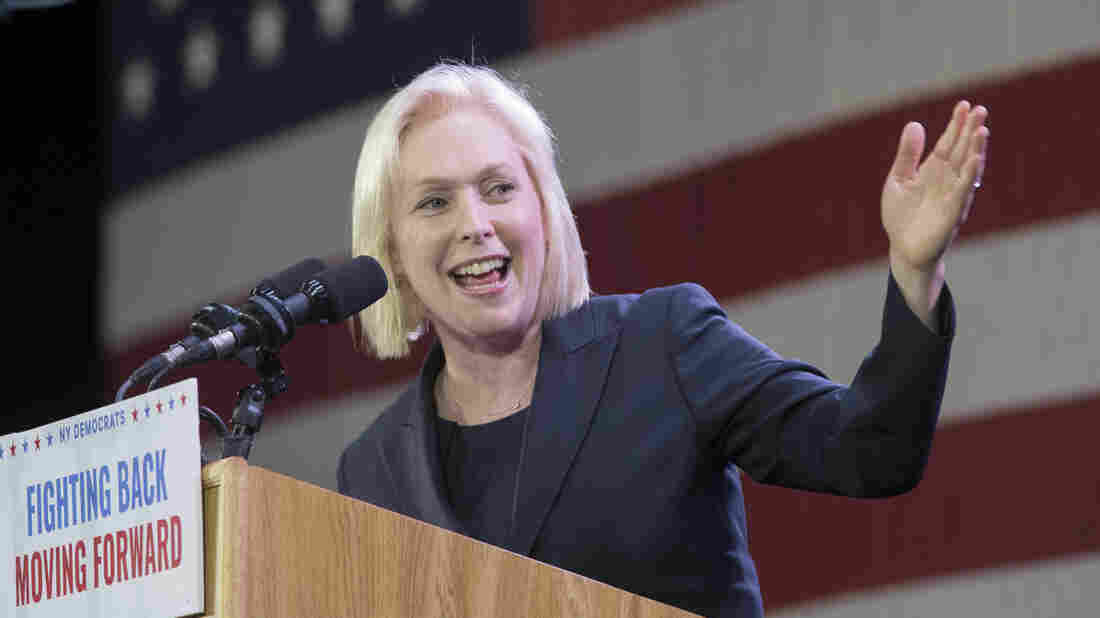 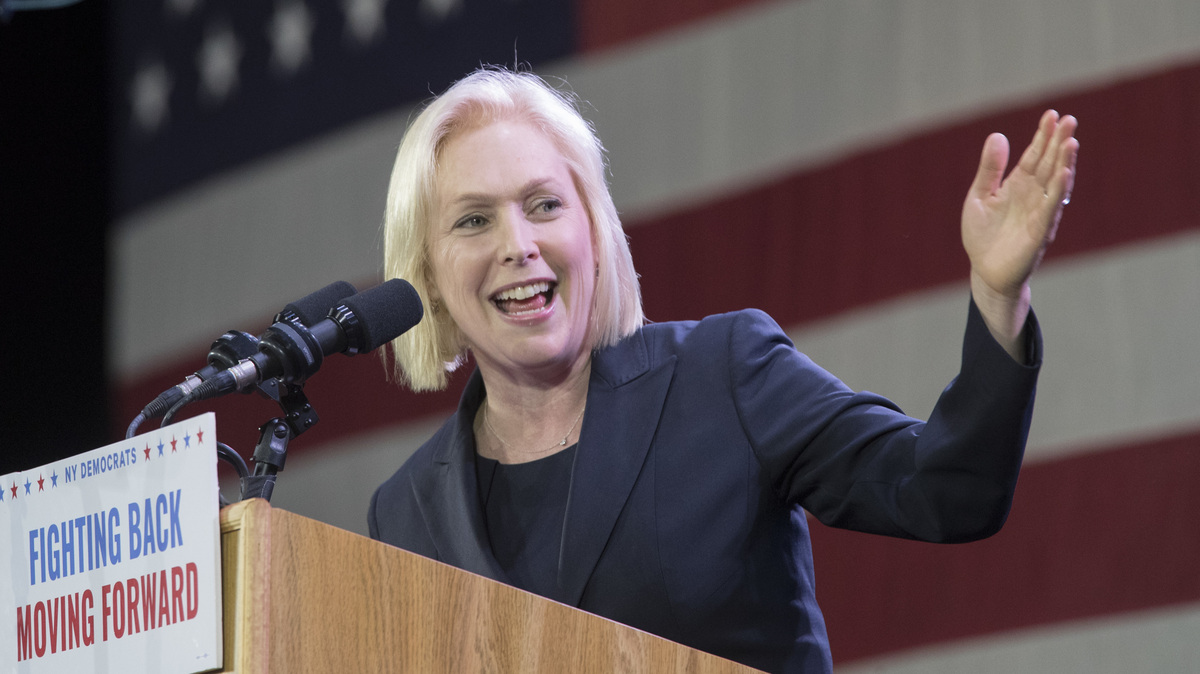 New York Sen. Kirsten Gillibrand says she is running for president, joining a growing number of Democrats who are seeking to challenge President Trump in 2020.

Gillbrand announced her decision on CBS's The Late Show with Stephen Colbert, saying she is filing her exploratory committee for the White House on Tuesday evening.

TONIGHT: @SenGillibrand stops by @colbertlateshow to announce that she is forming an exploratory committee to run for President of the United States! #LSSC pic.twitter.com/vPUpF1gs8z

"I'm going to run for president of the United States, because as a young mom, I'm going to fight for other people's kids as hard as I would fight for my own," Gillibrand told Colbert. "Which is why I believe that health care should be a right and not a privilege. It's why I believe we should have better public schools for our kids because it shouldn't matter what block you grow up on. And I believe that anybody who wants to work hard enough should be able to get whatever job training they need to earn their way into the middle class."

"But you are never going to accomplish any of these things if you don't take on the systems of power that make all of that impossible — which is taking on institutional racism, it's taking on the corruption and greed in Washington, taking on the special interests that write legislation in the dead of night," Gillibrand continued. "And I know that I have the compassion, the courage and fearless determination to get that done."

She is the second senator to enter the Democratic primary, after Massachusetts' Elizabeth Warren announced an exploratory committee on Dec. 31. Several other Democratic senators are also eyeing bids, including Kamala Harris of California, Cory Booker of New Jersey and Amy Klobuchar of Minnesota. Former Housing and Urban Development Secretary Julián Castro is also running, as is Hawaii Rep. Tulsi Gabbard.

Gillibrand was appointed to the Senate in 2009, succeeding Hillary Clinton when she became secretary of state. Before that, Gillibrand served one term in the House representing the Albany area. She won a special election in 2010 to finish out Clinton's term and was re-elected in 2012 and 2018. In a debate last fall, Gillibrand said she would serve out her six-year term, which if she were to win the race for president, she would not do.

In a campaign video published shortly after she announced her exploratory committee, Gillibrand detailed many issues she has worked on, including transparency in government, not accepting corporate PAC money and helping push through the Sept. 11 health bill.

The 52-year-old Gillibrand has long been seen as a possible presidential candidate. In the Senate, she has worked on legislation to combat sexual assault in the military and on college campuses, championed federal family leave and worked to elect more women to office.

"Sometimes people say, 'Well, why do you just focus on women's issues?' " Gillibrand told NPR in 2013. "Well, why do you focus on issues that pertain to 52 percent of the population? It's pretty important. And women are such the untapped potential in this economy."

Gillibrand's previous work on sexual assault and gender equality led to her becoming a leading voice in the #MeToo movement on Capitol Hill. In 2017, she was the first senator to call on Sen. Al Franken, D-Minn., to resign after he was accused of sexual misconduct. That provoked the ire of some Democrats, who saw Franken as a progressive hero standing up to Trump and said that Gillibrand had rushed to judgment before the accusations against Franken had been vetted. Politico reported that could hurt her with some potential donors in a presidential campaign.

"It was very difficult because this is somebody I really do care about and think has done great work in the Senate," she told NPR in 2017 after Franken resigned. "But the truth is, if we are defending this behavior but not that behavior, and talking about this, the gradations between sexual assault versus harassment versus groping, and then where on the body you're groping — I just don't think that's the right conversation to be having."

Having represented a more conservative area in upstate New York, one issue where Gillibrand could come under scrutiny in the eyes of many Democrats is gun control. When she was appointed to the Senate in 2009, Gillibrand said, "It's an important part of upstate New York. So I'm going to be an advocate for hunters' rights. But there is so much area where there's common ground, where I can work together with anti-gun — with really solving the problem of gun violence."

She told CBS's 60 Minutes last year that she was "wrong" about her previous stances on gun control and was "embarrassed" by them.

"What it's about is the power of the NRA and the greed of that industry. Let's be clear. It is not about hunters' rights, it's about money," Gillibrand said.