Accessibility links
'Inheritance' Investigates A Family Secret, With Self-Discovery At The Core Dani Shapiro, at age 54, is shocked to learn that the man she thought was her biological father wasn't a blood relative. Her memoir, a quest for the truth, reads like an emotional detective story.

'Inheritance' Investigates A Family Secret, With Self-Discovery At The Core

'Inheritance' Investigates A Family Secret, With Self-Discovery At The Core 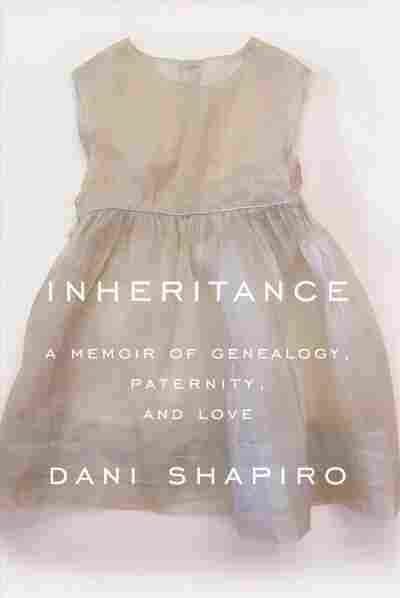 A Memoir of Genealogy, Paternity, and Love

Twenty years ago, Dani Shapiro's first memoir, Slow Motion, fell into the we-shall-overcome group. At its core is the mid-1980s car crash that killed her father and seriously shattered her mother. The accident slammed into 23-year-old Shapiro at a time when her life had veered dangerously off-course: She was a coke-snorting, heavy-drinking college dropout, the "kept" mistress of a friend's stepfather. The tragedy galvanized her to clean up the wreckage of her life.

Inheritance, Shapiro's tenth book and fifth memoir, is a quest to uncover a family mystery involving her identity. This time around, the catalyst is a genetic spit test taken out of idle curiosity in 2016. At age 54, Shapiro is shocked to learn that the devout Orthodox Jewish stockbroker she thought was her biological father — Paul Shapiro, the man who died in that car accident — wasn't a blood relative.

Shapiro is shaken to her core by this discovery. If Paul wasn't her real father and she isn't who she thinks she is, then who is she? Where did the non-Ashkenazi French, Irish, English, and German 48 percent of her DNA come from? And, even more upsetting: Did her parents know this and deliberately hide it from her?

Inheritance reads like a detective story, albeit an emotional one. It's full of twists and turns. Without divulging too much, I can tell you that Shapiro and her husband, two experienced reporters, crack the genealogical mystery with surprising ease. Yet that raises many more questions and broader societal issues concerning in vitro fertilization, sperm donors, and privacy protections.

"What next?" Shapiro asks. "I couldn't imagine what might come next...It turns out that it is possible to live an entire life — even an examined life, to the degree that I had relentlessly examined mine — and still not know the truth of oneself."

As she has demonstrated in previous books — including Devotion (2010), her memoir about faith, and Hourglass (2017), about the challenges of marriage — Shapiro is skilled at spinning her personal explorations into narrative gold. Like another author of multiple memoirs, Kathryn Harrison, life has handed her rich material. But her books work not just because the situations she writes about are inherently dramatic and relatable. Her prose is clear and often lovely, and her searching questions are unfailingly intelligent. She is not afraid to show herself in an unflattering light, which helps secure our trust.

With the rising popularity of genetic testing, the relevance of Shapiro's latest memoir extends beyond her own personal experience. Inheritance broaches issues about the moral ramifications of genealogical surprises, and about sperm donors' rights to privacy versus the rights of their offspring to know their roots, medical history, and half-siblings. Increasingly, news reports are cropping up about newly connected, middle-aged half-siblings, including some who have discovered that a fertility doctor substituted his own sperm for that of the donors their parents had selected.

To her credit, Shapiro doesn't settle for easy answers. She tenaciously pursues her quest to determine what each of her parents knew about her provenance. She tracks down their old rabbi, aged relatives and friends, the head of the Donor Sibling Registry, and people familiar with the unconventional fertility center where her parents sought treatment. She even visits a California Cryobank — not an option in the early 1960s when she was born — where a 6,000 gallon stainless steel silo is filled with enough vials of sperm frozen in liquid nitrogen to spawn millions of potential children. Its director opines that without the promise of anonymity, the sperm donor business would dry up.

These broader investigations save Inheritance from too much self-absorbed navel-gazing. Still, her chest-beating about who she is and how she could have missed the signs occasionally seems overwrought and melodramatic. Amid her laments about feeling as if she's losing her father for a second time, she sometimes forgets that shared DNA is no guarantee of connection — case in point, her "unreadable" mother.

In hindsight — which is how memoirs are written — Shapiro realizes that her DNA test results make sense: She had always felt like an outsider in her family. Blonde-haired, blue-eyed and fair-skinned, she grew up being told that she didn't look Jewish, and in fact at age three, was the model for Kodak's Christmas billboard at Grand Central Station. She recalls a creepy comment by Jared Kushner's grandmother, a friend of her parents in suburban New Jersey: "We could have used you in the ghetto, little blondie. You could have gotten us bread from the Nazis."

Shapiro writes, "All my life I had known there was a secret. What I hadn't known: the secret was me."