Accessibility links
A Deadly Tsunami Of Molasses In Boston's North End The Great Molasses Flood of 1919 in Boston resulted in a lawsuit that used expert witnesses for the first time and was the catalyst for new regulations governing architects and engineers. 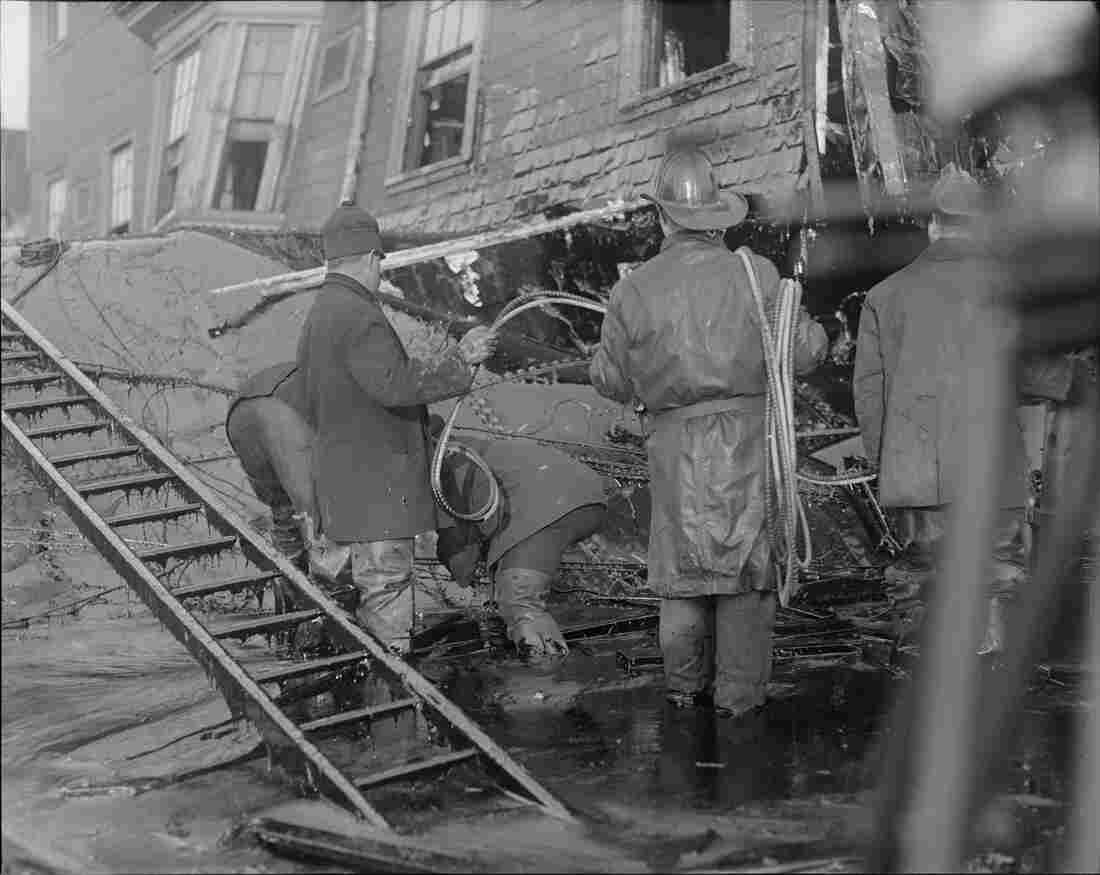 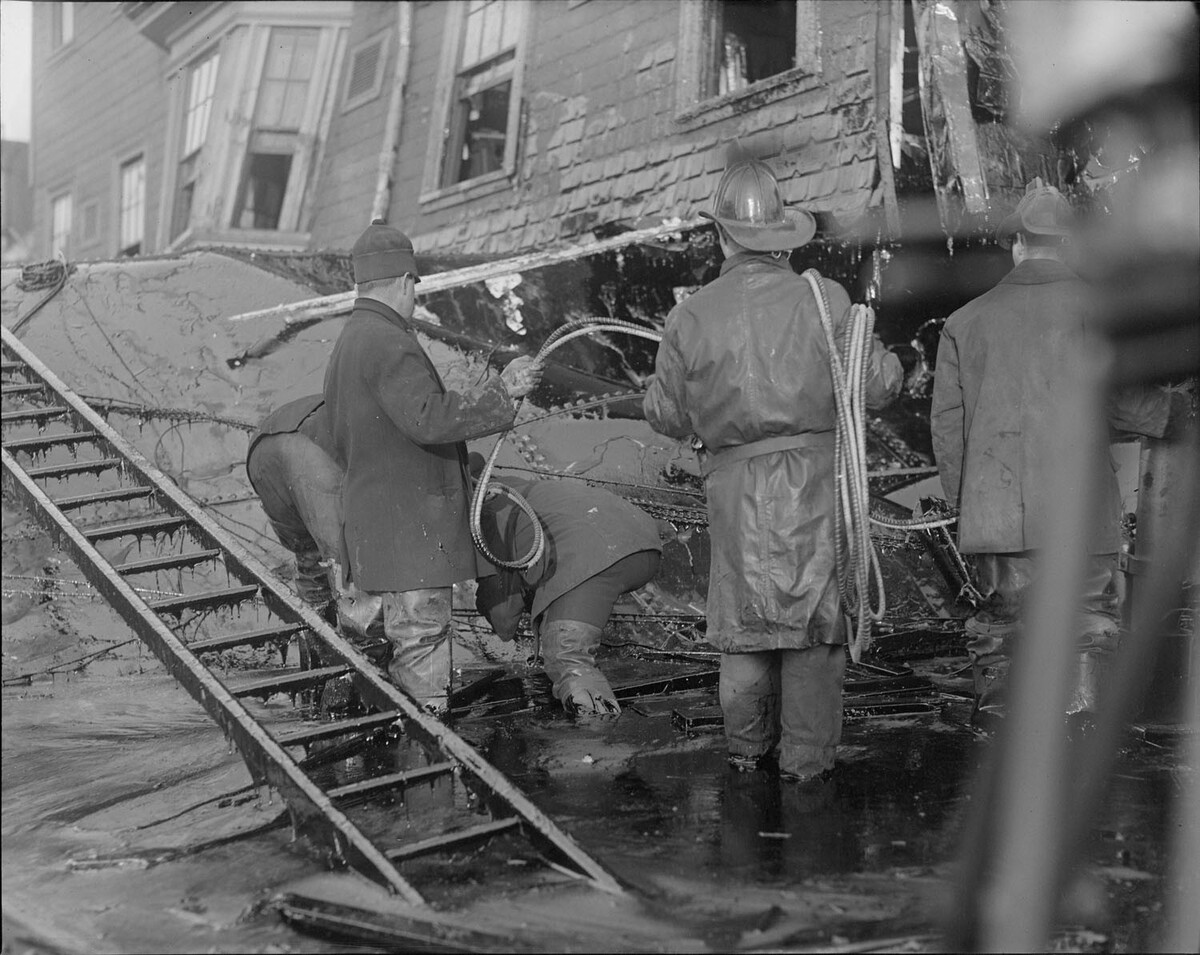 Firemen stand in thick molasses after the disaster in 1919. The Great Molasses Flood in Boston's North End killed 21 people and injured 150.

On Jan. 15, 1919, a tank of molasses burst, releasing a thick, sugary tsunami down the streets of Boston's North End. This "Great Molasses Flood" killed 21 people, injured 150, and had effects far beyond the Boston waterfront.

Walking around the North End today, Stephen Puleo, author of Dark Tide: The Great Boston Molasses Flood of 1919, points to a plaque where the 50-foot-tall steel tank once stood. Baseball fields now line Boston Harbor, but Puleo says a hundred years ago, you'd find a bustling port, a municipal yard and an elevated railway.

[The tank] leaked from Day 1. It was very customary for children of the North End to go and collect molasses with pails.

"This was one of the busiest commercial sites in all of Boston," he explains. "Almost all of the shipping that left Boston to go up and down the East Coast, to go to Europe, left from this site. So there were deliveries all day long, this was a bustling, hustling kind of place."

The tank was used to store molasses, which came up on ships from the Caribbean, until it could be transported to a nearby distillery where it was expected to become rum in the last days before Prohibition. Though only a few years old at the time of the flood, the tank showed signs of instability. 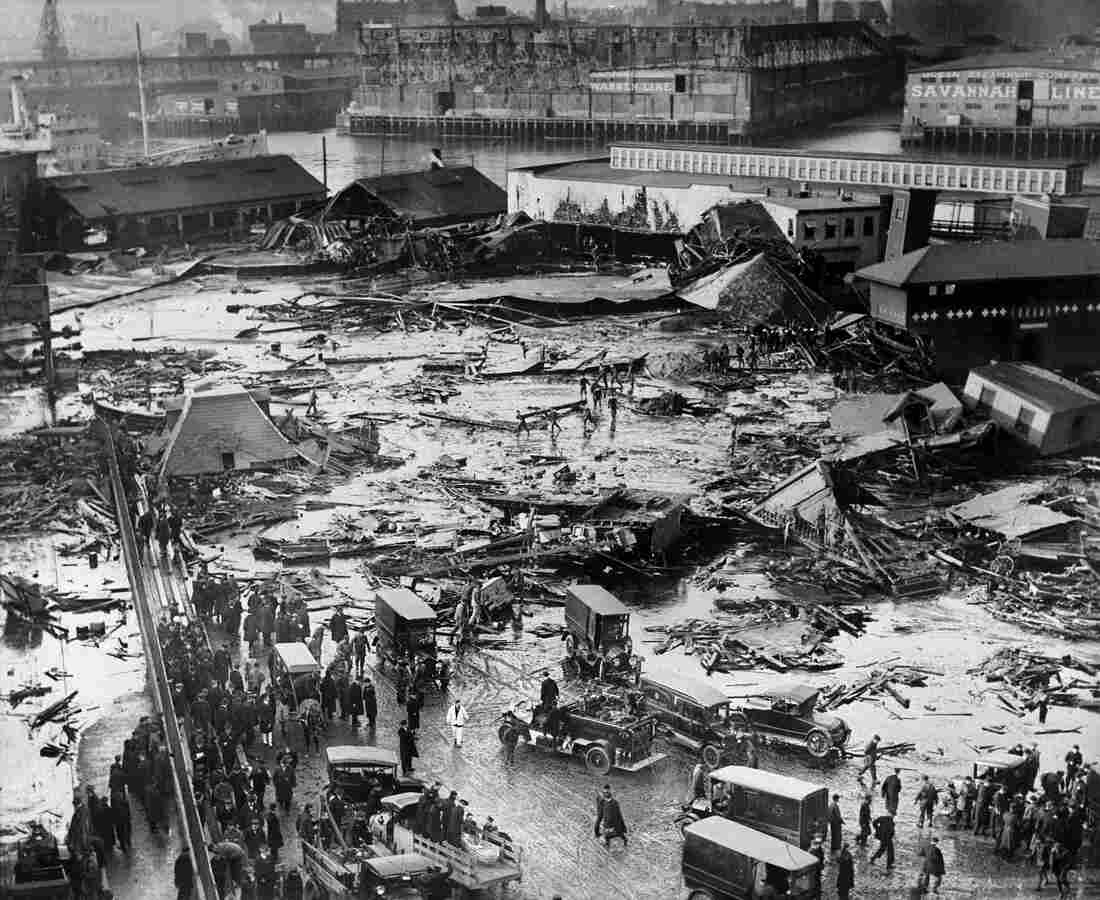 The ruins of tanks containing 2.5 million gallons of molasses lie in a heap after an eruption that hurled trucks against buildings and crumpled houses in the North End of Boston on Jan. 15, 1919. AP hide caption 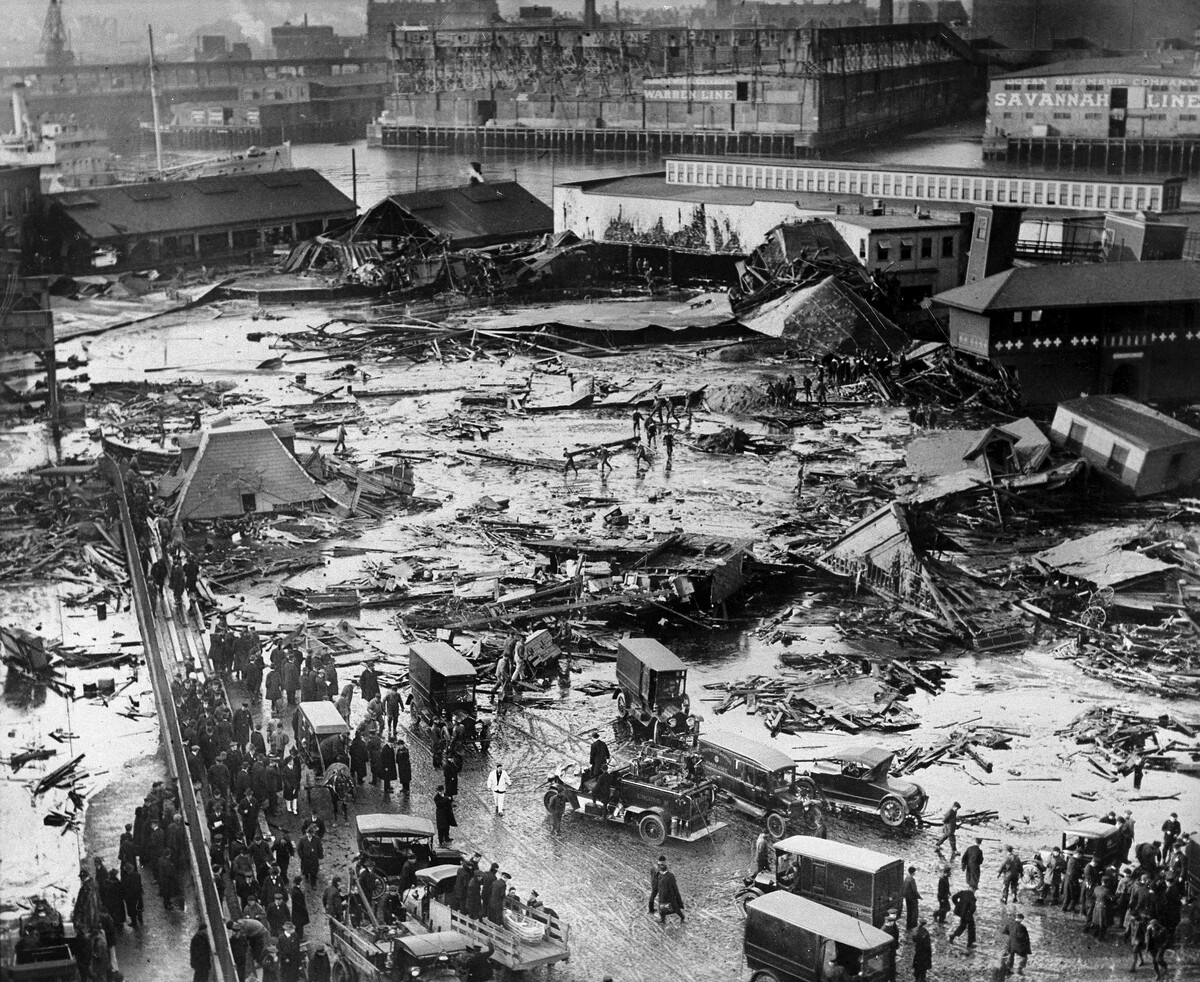 The ruins of tanks containing 2.5 million gallons of molasses lie in a heap after an eruption that hurled trucks against buildings and crumpled houses in the North End of Boston on Jan. 15, 1919.

"There were often comments made by people around the vicinity that this tank would shudder and groan every time it was full," Puleo says. "And it leaked from Day 1. It was very customary for children of the North End to go and collect molasses with pails."

When the tank burst, it unleashed a 30-foot-high wave of 2.3 million gallons of molasses that moved 35 mph down Commercial Street. The neighborhood was destroyed, coated in a thick, sticky layer of molasses.

Why did the tank fail?

Researchers have been fascinated by this flood, studying the causes behind it as a phenomenon of science and poor engineering.

According to Ronald Mayville, an engineer who researches the flood in his spare time, there is no surefire reason the tank failed. However, "one thing is very clear: it was under-designed. Whoever did the design failed to provide the adequate thickness of the steel. On top of that, the steel that they used, although it was state-of-the-art of the day, we know today that it could be relatively brittle under certain circumstances."

Puleo says that U.S. Industrial Alcohol, the company that owned the tank, had rushed to build it, employing an overseer who was an expert in finance, not engineering. When the company received complaints that the tank was leaking, it painted the tank brown to disguise the leaks rather than repair them.

Besides the structural aspects of the tank, researchers have explored how the scientific properties of the molasses itself explain why the flood was so destructive.

Nicole Sharp, an aerospace engineer and science educator, explains: "You basically have a giant stack of something that's really heavy and as soon as you remove whatever's holding that — in this case, the walls of the tank — all of that's gonna rush out. A lot of that potential energy that you had from stacking this thing up really high is going to turn into kinetic energy. It might as well be a tsunami."

Supposedly, you can still smell the molasses when it gets hot enough.

Two days before the accident, a new shipment of hot molasses had been added to the tank, so when it burst, the molasses inside might have been slightly warmer than the outside air. As it spilled out, it cooled and thickened, trapping survivors in the mess.

Rescue efforts continued for days, and cleanup took even longer.

Immediately following the flood, 119 plaintiffs filed a civil lawsuit against U.S. Industrial Alcohol, the tank's owner. The case was historic in many ways.

According to Puleo, the case set the stage for future class action lawsuits and was "the first case in which expert witnesses were called to a great extent — engineers, metallurgists, architects, technical people."

The case also completely changed the relationship between business and government. "All the things we now take for granted in the business — that architects need to show their work, that engineers need to sign and seal their plans, that building inspectors need to come out and look at projects — all of that comes about as a result of the great Boston molasses flood case," explains Puleo.

For a short time, the story was all anyone could talk about. "Boston has seven daily newspapers at the time," Puleo says. "And the molasses flood is so big that it knocks off the front page the Prohibition Amendment, which essentially passes the night of the molasses flood, and it knocks the Versailles peace talks, the talks that ended World War I, off the front page."

Even today, the flood lives on in neighborhood folklore. According to Nick LaBonte from Polcari's Coffee, "Supposedly, you can still smell the molasses when it gets hot enough."

Molasses had long been a major part of the city's industry, from the key ingredient in Colonial baked beans to World War I munitions. But today, molasses is not a common sight on the Boston waterfront. The tank's destruction brought an end to 300 years of tradition.