Accessibility links
Saudi Woman Who Fled Country Hopes She Inspires Others To Follow Rahaf Mohammed Alqunun captured the attention of the world in a series of social media posts pleading for asylum. Her family, who she claimed was abusive, has disowned her. 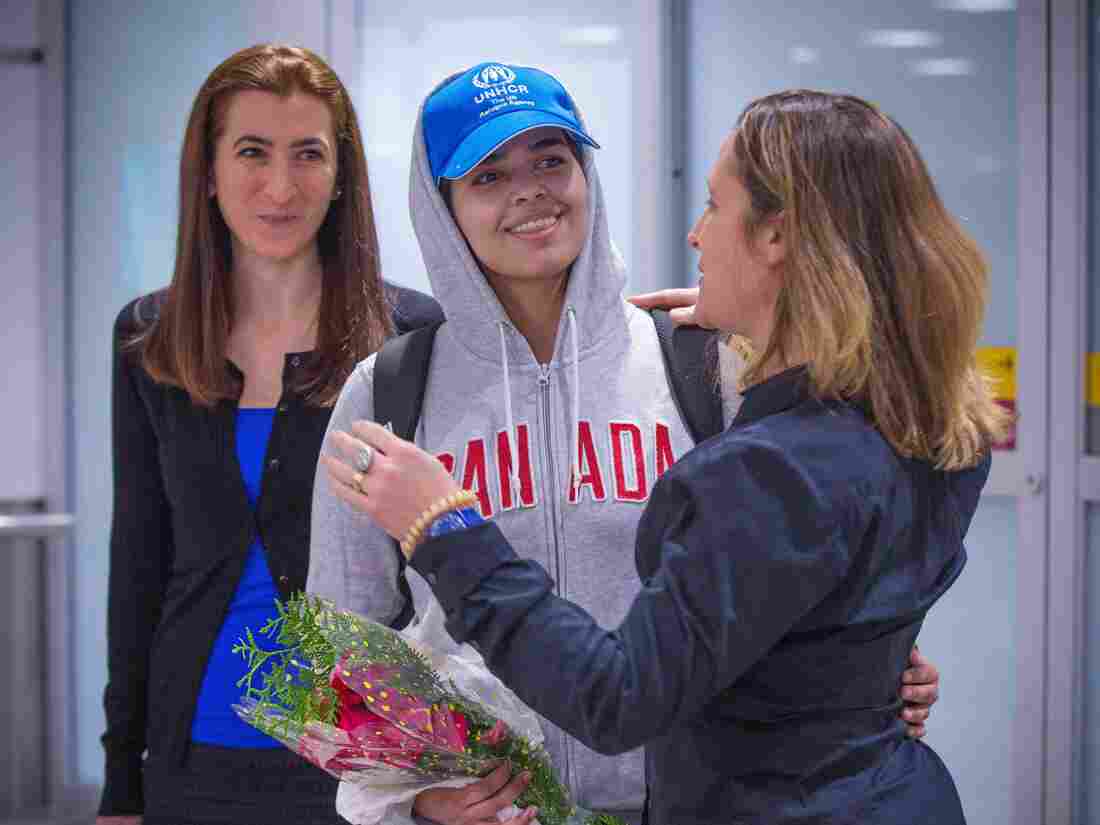 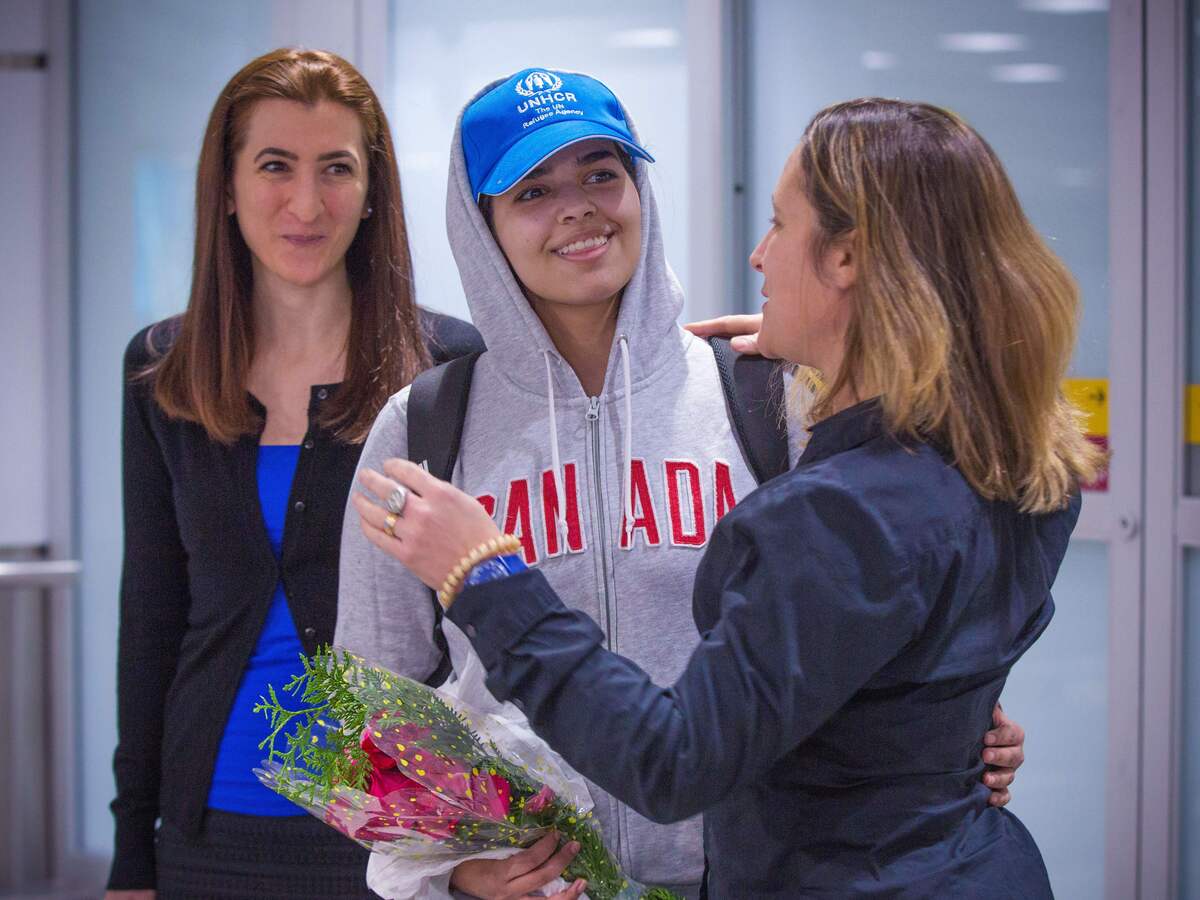 Rahaf Mohammed Alqunun (center) is welcomed by Canadian Minister for Foreign Affairs Chrystia Freeland as she arrives at Pearson International Airport in Toronto, Ontario, on Saturday. The young Saudi woman who fled her family successfully harnessed the power of Twitter to secure asylum in Canada.

The 18-year-old Saudi woman who secured asylum in Canada hopes other women will be inspired to follow in her footsteps.

After she learned on social media that her family had disowned her, Alqunun said she'd like to drop her family name and go by Rahaf Mohammed, the Toronto Star reports. It's her latest show of defiance against a family she says abused her, in a country that forces women to get a man's permission to travel or marry. Relieved to leave that culture behind, she hopes to galvanize others to do the same.

"I think the number of women fleeing from the Saudi administration and abuse will increase, especially since there is no system to stop them," she said in her first television interview since arriving in her new country. "I'm sure that there will be a lot more women running away. I hope my story encourages other women to be brave and free."

After grabbing the world's attention with a series of frantic social media postings, Rahaf Mohammed Alqunun secured asylum when Canada agreed to take her in as a refugee. But for a terrifying period while her fate was uncertain, Alqunun considered taking her own life, she said in an interview with the Australian Broadcasting Corp.

"I was expecting them to enter the room and kidnap me," she said of security officials who were outside the airport transit hotel where she barricaded herself earlier this month. "That's why I wrote a goodbye letter. I decided that I would end my life, before I was forced back to Saudi Arabia."

Alqunun's story didn't end in that hotel room. With the help of the United Nations High Commissioner for Refugees, which facilitated her application for asylum, Alqunun is now "in a safe place," she said.

When she walked through the airport door in Toronto, and Canadian Foreign Minister Chrystia Freeland was there to greet her, "I felt free, and it was like I was born again," she told ABC. "I felt overjoyed. There was a lot of love and hospitality, especially when the minister welcomed me and told me I was in a safe country and had all my rights."

Anticipating a new life in Canada, Alqunun wants to attend college and study architecture, she told the New York Times. And she wants to experience what it's like to be a normal teenager. "I want to do crazy things I've never done before," she said.

Multiple GoFundMe campaigns have raised several thousand dollars to help Alqunun start over. The "official" fundraising campaign quickly raised $10,000 and is no longer accepting money. There's also a campaign by the Australian group Secret Sisterhood, which had protested in Sydney to try to persuade Australia to grant Alqunun's refugee request. Alqunun filled out her visa application at the Australian Embassy in Bangkok last week, but the UNHCR withdrew its request for resettlement there because the country was taking too long to decide on her asylum, ABC reported.

Alqunun's newfound freedom has come at a cost. Her family has disowned her "simply because I wanted to be independent and escape their abuse," she said. "I wanted to be free from oppression and depression. I wanted to be independent." Had she stayed in Saudi Arabia, "I wouldn't have been able to marry the person I wanted. I couldn't get a job without permission," she said. Alqunun's father has denied physically abusing her or forcing her into an arranged marriage, The Associated Press reported.

Do you know how many #Saudi women have written to me saying “I wish that was me!”. What Rahaf has done is revolutionary. I recorded this last Monday https://t.co/S06iIWgXpW #EndMaleGuardianship

Saudia Arabia has a male guardianship system. This means women need permission from a male relative for major life decisions like marriage, work and travel, NPR has reported. Women there have only been legally allowed to drive since June.

"Women in Saudi Arabia are treated like children, even if they are 50 or 60 years old. They treat women terribly. They aren't free or equal to their male counterparts," Alqunun said. "I hope my story prompts a change to the law especially as it has been exposed to the world. This might be the agent for change."

Canada's acceptance of Alqunun could further fray its relations with Saudi Arabia, which had already been tense since the summer, NPR has reported. The Saudi government expelled the Canadian ambassador and recalled its own after Canada's foreign minister criticized Saudi Arabia's arrest of a human rights activist.