Accessibility links
American Among Those Killed As Explosions, Gunfire Rock Nairobi Hotel The attacks took place at an upscale complex in Kenya's capital. An explosion tore through a bank, then a suicide bomb detonated in a hotel lobby before attackers entered the building, shooting. 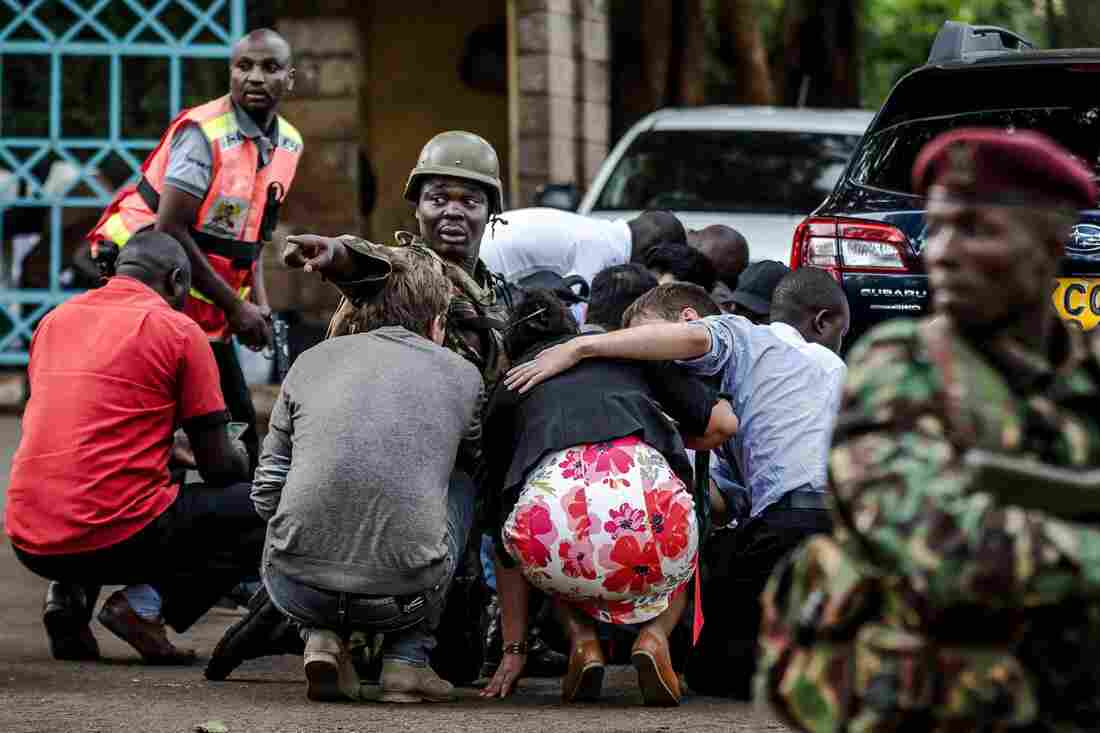 Special forces protect people at the scene of an explosion at a hotel complex in Nairobi on on Tuesday. The attack has been claimed by Al-Shabab, a Somalia-based terrorist group. Luis Tato/AFP/Getty Images hide caption 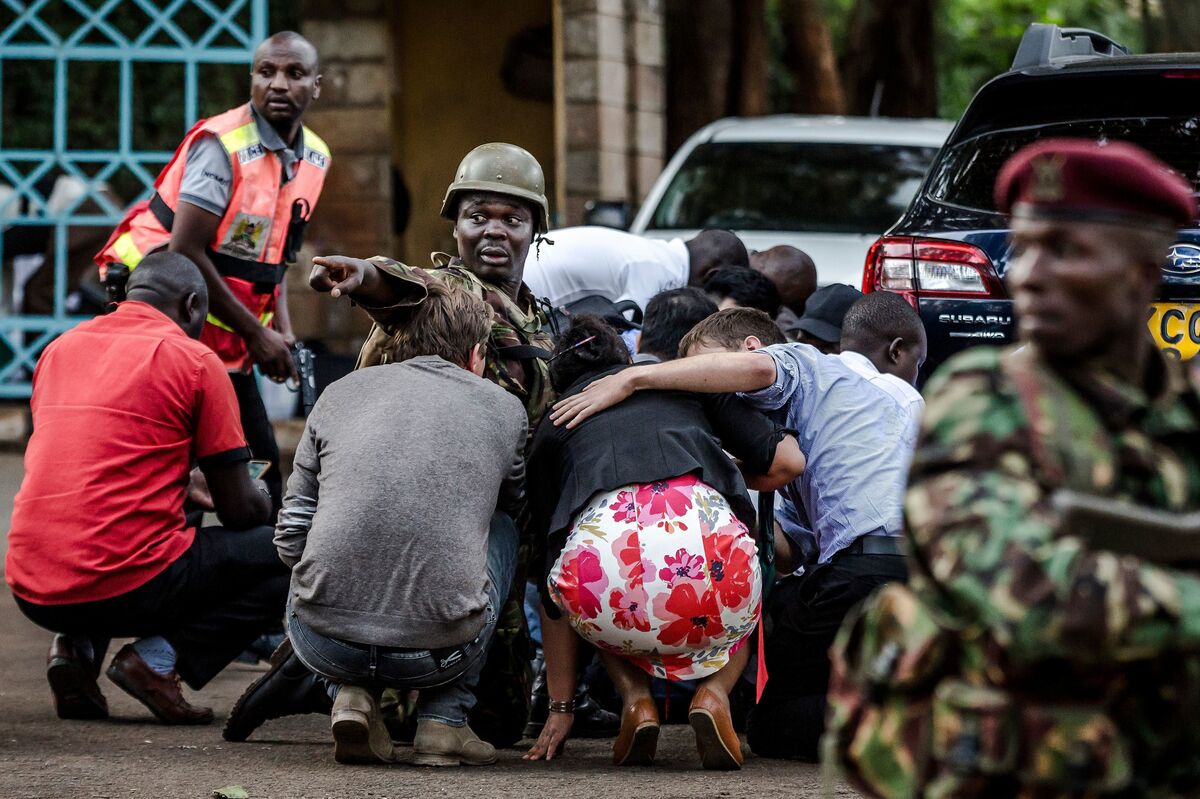 Special forces protect people at the scene of an explosion at a hotel complex in Nairobi on on Tuesday. The attack has been claimed by Al-Shabab, a Somalia-based terrorist group.

An attack on a luxury hotel in Nairobi killed 14 civilians Tuesday, including one American, before security forces subdued the gunmen.

Kenyan authorities declared that the violence had ended multiple times, only to be contradicted by bursts of gunfire that kept police busy for several more hours. Al-Shabab, the Islamic extremist group based in Somalia, claimed responsibility for the attack, carried out by at least four armed men.

"All the terrorists have been eliminated," President Uhuru Kenyatta said in a televised address Wednesday morning. We are grieving as a country and my heart and that of every Kenyan goes out to the innocent men and women violated by the senseless violence. ... We will seek out every person that was involved in the funding, planning and execution of this heinous act." Keyatta said rescue teams had evacuated more than 700 people, according to the Associated Press.

To God be the Glory. We have been rescued. Over 50 people in my group. No injuries Thank you all for the support and prayers. Thanks You KDF #14Riverside

The series of apparently coordinated attacks rocked a hotel complex in Kenya's capital on Tuesday, when an explosion tore through a bank in the compound at about 3 p.m. local time. Then a suicide bomb detonated in the lobby of the nearby DusitD2 hotel, before attackers entered the hotel, shooting.

The U.S. State Department confirms that an American was killed, but has not released his or her name. Cabinet Secretary for Interior Fred Matiang'i had said in a statement Tuesday night that the hotel complex had been secured. However, bursts of gunfire were still heard in the area, NPR's Eyder Peralta reported from Nairobi.

"Even as the sun rose over Nairobi, the Kenyan military was still trading fire with suspected terrorists in the hotel compound," Peralta reported. "Through the night and into the morning, dozens of people were rescued from the hotel. Many of them were rushed to hospitals with serious injuries."

Al-Shabab, the Islamic extremist group that claimed responsibility for the attack, is the same group that attacked the Westgate Mall in Nairobi in 2013, where 67 people were killed.

"Authorities say one of the gunmen blew himself up at the hotel restaurant," Peralta said. "The other gunmen then moved through the hotel complex, and eventually some of them barricaded themselves in one of the top floors." Kenyan officials described the operation as a mopping-up exercise, the AP reported.

Similar to the Westgate siege, the attacks on Tuesday appeared aimed at Nairobi's wealthy residents, including foreigners. Visitors to the upscale hotel, which is located in a leafy area of the Westlands neighborhood, have to pass through two security checkpoints and an airport-style scanner.

It's not clear how the attackers managed to infiltrate the complex.

We regret to confirm that at approximately 3pm today, a group of armed assailants attacked the Dusit Complex in a suspected terror attack. Security and emergency teams immediately responded to the incident and have cordoned off the area. The situation is being..

Reporter Halima Gikandi tells NPR that during the attack, people were "hiding in nearby buildings that were not attacked, and communicating with emergency responders who [were] trying to get them. I've spoken with family members of people hiding in buildings."

She says helicopters were heard flying overhead and that armed black vehicles were seen entering and leaving the area, which had been closed off. 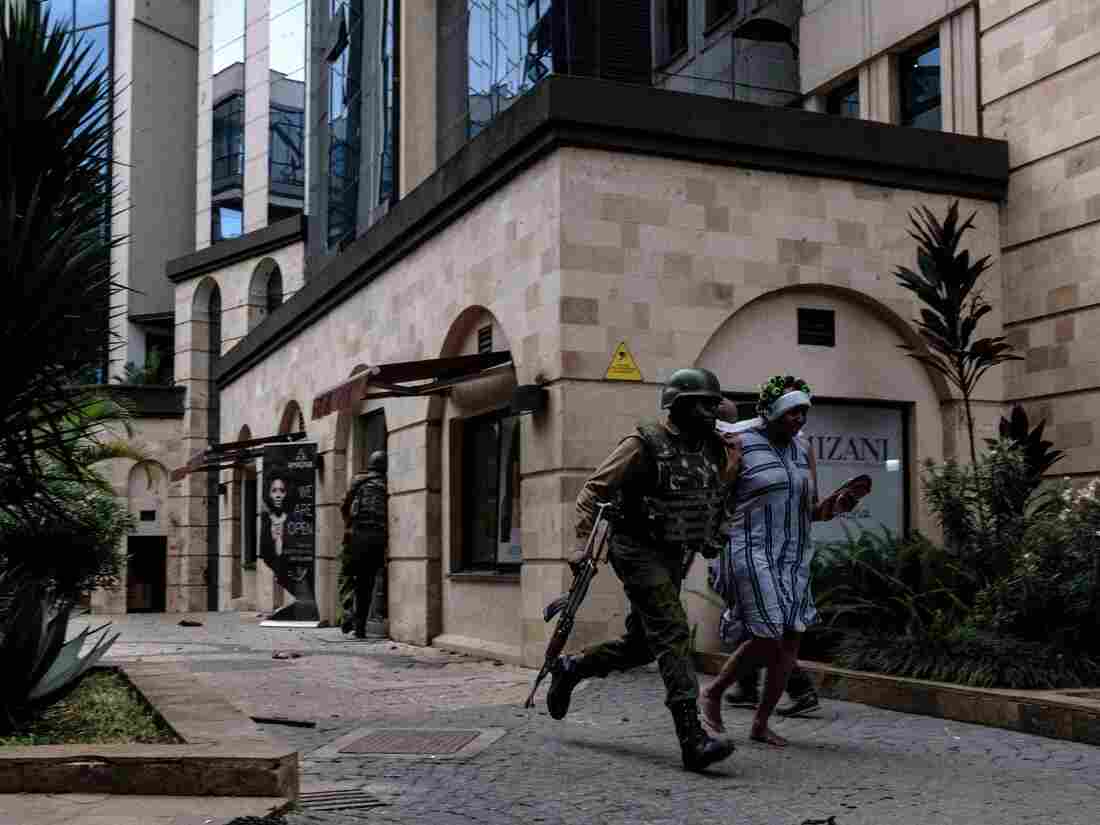 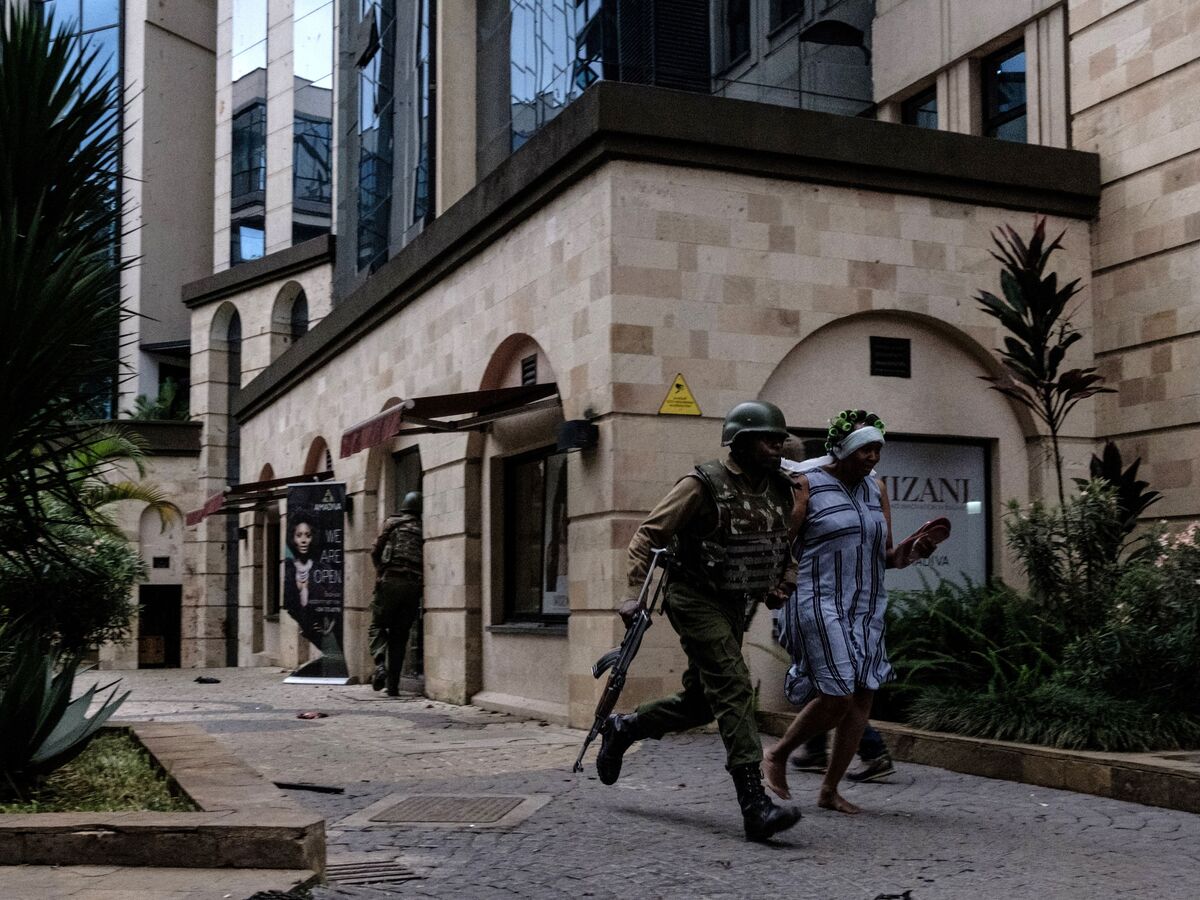 Kenyan security forces evacuate people after an explosion at DusitD2 hotel in Nairobi, Kenya, on Tuesday.

One frightened witness, who wanted to be identified only as Ali, was in the hotel for a workshop. "We heard an explosion," he told NPR. "The whole ground shook. None of us really knew what it was, but I felt it was like a bomb."

Enoch Kibet, who works as a cleaner at a cafe in the compound, managed to crawl out a basement gate. "We were changing our shifts, and that is when I heard a loud blast and people were screaming," he told the AP. "I couldn't believe I was alive. The blast was so loud and shook the whole complex."

People were being escorted out of the complex at 14 Riverside Drive more than three hours after the attacks started, according to Reuters.

The AP notes that the attack came a day after a magistrate ruled that three men must stand trial on charges they played a role in the Westgate siege.

Kenya has been a target of Al-Shabab since Kenyan troops entered Somalia in 2011 and won back strategic territory held by the extremists. "The attack at Westgate Mall is just a very tiny fraction of what Muslims in Somalia experience at the hands of Kenyan invaders," Al-Shabab has tweeted in the past.

In 2015, Al-Shabab militants attacked a university in Garissa, a city in eastern Kenya about 90 miles from the border with Somalia. Gunmen killed 147 people in the course of a daylong siege.