Accessibility links
'Schitt's Creek' Flows Smoothly Into Season 5 The characters have grown, their relationships — to each other, and to viewers — have deepened, the writing's sharp and the actors are having a ball. Dive in. Johnny (Eugene Levy) and Moira (Catherine O'Hara) get some things to crow about in season 5 of Schitt's Creek. POPtv hide caption 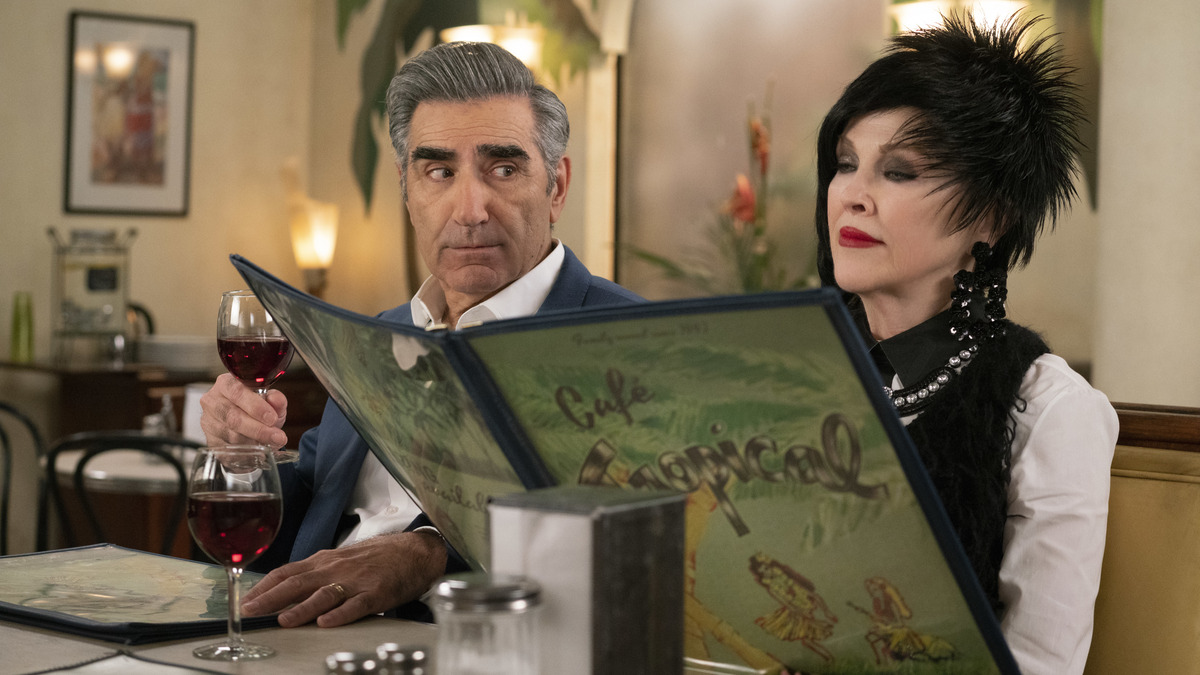 Johnny (Eugene Levy) and Moira (Catherine O'Hara) get some things to crow about in season 5 of Schitt's Creek.

A sitcom lucky enough to reach its fifth season has managed to navigate its vulnerable infancy, its nervous childhood, its awkward adolescence and its halting young-adulthood. Like most of us at that stage of life, it knows what it is — enough to convincingly fake it, anyway — and it can finally get on with the business of being that.

College is done, the world beckons, they're at peak confidence and vitality. The hard work's over, right? Smooth sailing!

Wrong. The real work is only beginning.

It takes time, hours and hours of clocked field time, for the characters to find themselves, for the actors to settle into their performances, and — especially — for the jokes to seem as if they could only arise from this show — from these specific characters, in these specific situations. For characterization, performance and script to finally fuse into a sensibility that feels particular — unique, ideally; the sort of thing that uncouth marketing types might call its brand.

Precious few sitcoms find that formula; most never quite manage to attain the alchemical mixture that transforms them from pleasant diversions — passable if generic time-passers — to something that feels truly special.

It took the Canadian sitcom Schitt's Creek (which airs on POPtv here in the States) less time than most to refine itself into the show it is now. Created by SCTV's Eugene Levy and son Dan Levy, the series — about an obscenely rich family that loses everything and is forced to relocate to their sole remaining asset, the rural town of Schitt's Creek — hit the ground running, with clearly defined characters and a strong sense of itself.

The sit of this particular com, of course, is classically fish-out-of-water broad; it's Green Acres, basically: rich urbanites in a podunk backwater. But the series has always taken care to pair its larger than life elements with small, resonant character beats, which makes all the difference.

As Johnny, the head of the Rose family, Eugene Levy plays to his long-proven strengths — a masterful slow-burn that sets those signature eyebrows to undulating like a bushy sine wave across his face as his exasperation increases. But the show also gifts him quieter moments, in which his devotion to his wife, his concern for his family, and his unquenchable desire to find a solution to their plight feels real.

Gift-to-humanity Catherine O'Hara's Moira Rose operates on a higher comedic frequency than the characters around her. Her rarefied affect, her blithe self-involvement and — especially — her hilariously pseudo-mid-Atlantic locution, all breathy vowels and explosively plosive consonants (she hits the ts in "MORTally" and "muTANTS," for example, like they're slammable doors) — would, in a lesser performance, veer into caricature. (Watch how, with a simple tilt of her head, she transforms into a portrait of simpering condescension; suddenly she's Downton Abbey's Lady Mary, if Lady Mary could pull off Alexander McQueen.)

And that's even before you contend with the fact that the scripts are loath to show us even the tiniest hairline cracks in her facade. No: Moira doesn't soften, she doesn't adapt, she doesn't settle. From the very first episode, she, more than any member of the Rose clan, has assiduously stuck to her guns: She wants her old life back. She wants OUT.

And yet, because O'Hara's such a pro, such a precise, empathetic performer, she communicates Moira's core humanity in the tiniest of moments that serve not to contradict her outsize, actorly persona, but instead to deepen it. In the season 2 episode "Moira's Nudes," for example, she's given a lovely speech about the ephemeral nature of physical beauty that's at once uncharacteristically warm, and characteristically ... Moira. In the season 4 episode "Open Mic," she does nothing more than place her hand on her son David's arm at a crucial moment; it's a rare demonstration of physical intimacy that lands all the harder because of that selfsame rarity.

Speaking of David — Dan Levy has invested the character with a sharp tongue, a fashion-forward predilection for severe-yet-fussy black-and-white knitwear and a blanket self-involvement shot through with intermittent flashes of self-awareness. As his sister Alexis, Annie Murphy plays a variation on the theme of blithe Rose-family self-involvement — one that's more assured, more cunning, but just as transparent.

As the series has progressed, the two siblings' personae have edged subtly closer together, and their relationship — to each other, and to the audience — has deepened. They're more likely to offer each other emotional support, even as they continue to delight in each other's misfortunes. Which is to say: They're siblings.

Season 5: Where we stand

As mentioned above: Now that the series is entering its fifth season (the first two episodes of which air back-to-back on Wednesday, January 16th on POP), the real work begins. The characters, and the world they inhabit, are well-established. The various relationships among the Rose family and the inhabitants of Schitt's Creek have developed. Romances have begun, ended and, in some cases, begun anew. The motel in which the main characters are stuck has grown incrementally but palpably less dumpy.

The question now becomes: Will the show's various characters and storylines simply iterate — as so many classic sitcoms start to do, at this point in their lifespans — or will they continue to grow? Will they stay in place, cycling through previously established character and story beats again and again, or will those characters and stories advance towards the show's inevitable conclusion?

Based on the new season's first five episodes, Schitt's Creek seems inclined to the latter choice.

Moira gets an acting break. It's a hilariously low-budget one, but it allows O'Hara to throw herself into a wholly new situation, and in the process show us a facet of Moira we haven't seen before. We learn that her overweening self-regard is actually a form of self-protection. We come to understand that, in her line of work, talent often proves less important than the savvy that hard-won experience brings.

We gain a new appreciation for the extent to which Johnny's sense of self-worth is tied up in his relationship to Moira, and his need to be of use. David and Alexis continue to figure out their respective romantic relationships: Both are creatures of profound emotional need who find themselves forced to reconcile their instinctive selfishness with the fact that their partners, Noah Reid's placid Patrick and Dustin Milligan's aggressively normal Ted, both see them for whom they are.

Historically, the series has struggled to provide Patrick and Ted — and, especially, Emily Hampshire's sardonic motel clerk/owner Stevie — with enough to do to turn them into rounded, clearly defined characters in their own right. These first few episodes of season 5 happily advance Stevie's long-stalled storyline, steer Ted harder into the "handsome doofus" skid, and — very smartly — allow Patrick to display a wider range of emotions toward David than simple infatuation.

Jennifer Robertson's hilarious performance as Jocelyn — all those gritted-teeth smiles and that barely throttled incredulity in the face of Moira's obtuse, incessant self-regard — remains the series' secret weapon, though the first few episodes of the season find her more or less sidelined in an "exasperated mother to newborn" plotline.

All of which is to say: Season 5 moves the series further down the road toward its inevitable conclusion — which, whenever it comes, can't help but prove a bittersweet one. Either the Roses will make it back to their previous way of life, or they won't. Maybe one or two of them will get the chance to return, and others (not Moira, never Moira) will choose to stay. There will, inevitably, be goodbyes, and a permanent sundering of relationships that they, and we, have come to know intimately.

And when it comes, whenever it comes, those of us who've come to love this show will feel its absence like an ache — one that's specific, one that's unique, one that only this show, these characters and these actors could engender.