Accessibility links
From A Cell To A Home: Newly Released Inmates Matched With Welcoming Hosts A novel housing program in California links people who have served long-term prison sentences with those willing to rent space in their homes. 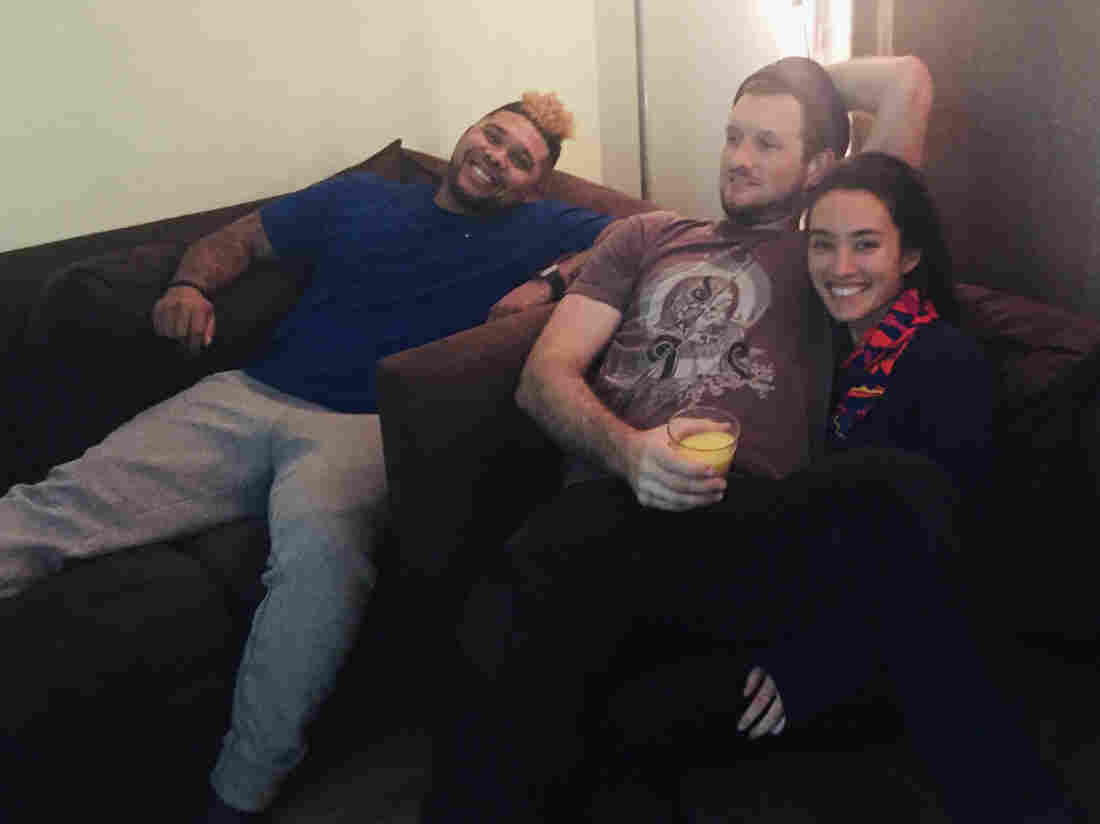 Jason Jones (left) with his roommates Joe Klein and Tamiko Panzella in their Oakland, Calif., apartment. Panzella and Klein are participating in a new program to provide housing to former inmates. Jones was released recently after nearly 14 years in prison. Courtesy of Tamiko Panzella hide caption 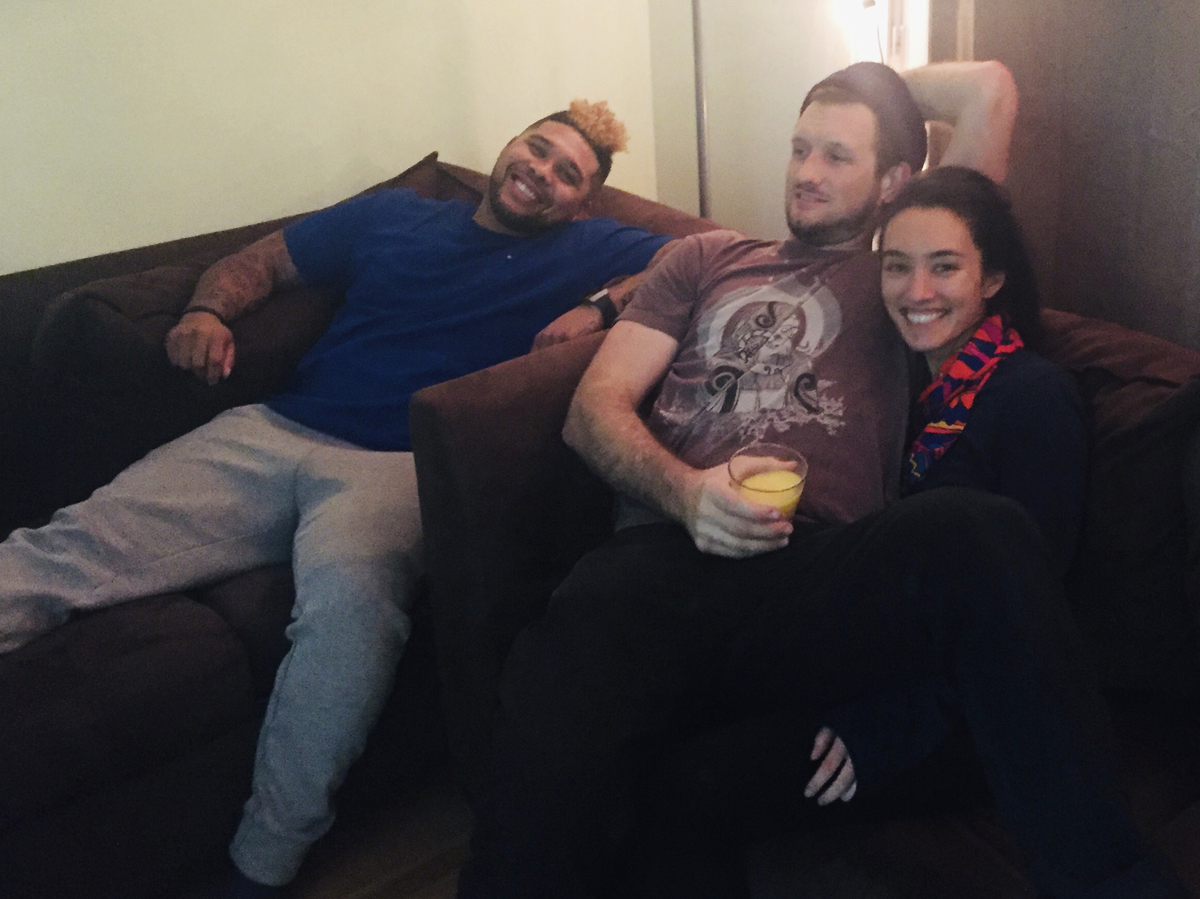 Jason Jones (left) with his roommates Joe Klein and Tamiko Panzella in their Oakland, Calif., apartment. Panzella and Klein are participating in a new program to provide housing to former inmates. Jones was released recently after nearly 14 years in prison.

It's a Friday night and roommates Jason Jones and Tamiko Panzella are hanging out in the Oakland, Calif., apartment they share, laughing about an epic gym workout misfire.

"I get there and we have to take our shoes and socks off. And I'm like, oh no, she got me into yoga. She tricked me," Jones says, laughing.

What made the yoga session more jarring — it was Jones' first full day of freedom after more than a decade behind bars.

"Yeah they tell me to get into Downward Dog," Jones says as Panzella chuckles. "That's the one position you don't want to be in in prison. The second day out! And I look over there and she's dying laughing."

On one level, it's all normal, life-with-roommates kind of stuff. But it's new for Jones, 35.

He recently was released on parole, serving nearly 14 years in a series of California prisons for felony assault with a deadly weapon.

Jones and Panzella are part of a first-of-its-kind program that's providing vitally needed housing for inmates released from prison. The program also aims to break down misconceptions and fear surrounding the formerly incarcerated in a nation that imprisons more people than any other.

The Homecoming Project in Alameda County, Calif., is matching prisoners being released after long sentences with homeowners and renters who want to take part in the experiment. The nonprofit behind the program pays the former inmates' rent for six months and actively supports the partnership.

Call it the social justice arm of the sharing economy. "The sharing economy with a conscience, with values," says Alex Busansky, a former prosecutor and Justice Department lawyer. He now runs Impact Justice, the group behind the novel housing initiative.

For people getting out of prison, the penalty hasn't ended and re-entry is its own obstacle course that everybody has to navigate. And housing is essential to being able to get through that obstacle course.

The Homecoming Project provides cash subsidies to homeowners in exchange for renting a room to a former inmate, Busansky says. It is similar to how Airbnb allows people to monetize their extra living spaces.

"For people getting out of prison, the penalty hasn't ended and re-entry is its own obstacle course that everybody has to navigate," Busansky says. "And housing is essential to being able to get through that obstacle course: If you don't have a place to sleep, to shower, to keep your things, it's very difficult to think about doing anything else."

Finding stable, affordable housing — especially in the San Francisco Bay Area — is often one of the biggest barriers to ex-inmates, along with finding a decent job and getting their life back on track.

Across America, most inmates getting out after serving a lengthy sentence are offered some kind of transitional housing or a slot in a halfway house.

That usually involves communal living in cramped quarters with other ex-convicts. Often, there are strict curfews, limits on visitors and other prisonlike rules and restrictions. Some former inmates chafe at those limits, because it can limit their ability to reconnect with family or find a job.

But this program has none of that. Participants come and go as they please. Issues that arise are worked out like any normal roommate situation.

"Project Homecoming says you're a person and we're going to treat you like a person and give you the footholds and the scaffolding to be able to come back home and to be a full member of society just like anybody else," Busansky says.

Both ex-inmates and home hosts are carefully screened, through interviews and home visits, to make sure it's a good housing match. Hosts agree to rent to the ex-prisoner for at least six months. There is training for the hosts before anyone gets a key to the home and follow-up support for all of them on the often unique and formidable challenges facing the formerly imprisoned.

Most of our hosts are familiar with redemption and change and want to be a part of helping be the stepping stone for someone's second chance.

"We take a hard look at people's pasts," says the program's coordinator, Terah Lawyer, who, as a formerly incarcerated woman, knows about the challenges of transitioning back home. "We have to look at their past as an indicator of what they've become over time. And most of our hosts are familiar with redemption and change and want to be a part of helping be the stepping stone for someone's second chance."

So far, the experiment is small. It launched just a few months ago with six male ex-convicts paired with local hosts — couples and families — around the Bay Area. Impact Justice hopes to expand it to 25 participants by the end of this year.

Tamiko Panzella says she was initially apprehensive. But she had volunteered at a local prison and knew the challenges facing the formerly incarcerated. The more she learned, the more she and her boyfriend became excited to take part in the pilot.

'Changing The Mindset': Female Inmates In Training For A Life After Prison

"Because it's not just working with the person in front of you," Panzella says. "If it's successful, this is something that could be replicated" in other American cities to smooth re-entry for former prisoners. In the U.S., more than 600,000 people are released from prison every year.

A larger and perhaps more elusive goal is to demystify and to humanize the often abstract debates around criminal justice reform.

"For many people, the story of prison in America is not a story they know. They don't know people who are in prison or people who are getting out of prison," Impact Justice's Busansky says, noting that the biggest obstacle to scaling it is finding enough hosts.

"There's fear, there's apprehension, a sense of the unknown. It's hard to tell people, 'This is a great idea and you should try it; bring a stranger getting out of prison into your home,' " he says. "Not a conversation that most people are used to having."

But it's one Busansky believes America has to have — especially now — as a growing bipartisan national movement of progressive district attorneys, reform groups and businesses work to unwind decades of drug war-fueled mass incarceration.

One recent report estimates that former inmates are almost 10 times more likely to become homeless than the general population.

"We'd love to increase our host numbers, but we can't just say 'yes' to anyone and everyone," Terah Lawyer, the program coordinator, says. "And we're not going to house people in unsafe neighborhoods that are not nurturing," or where people might be at greater risk for re-offending or falling back into old habits.

"Part of a family"

Former inmate Jason Jones grew up in Tulare, a mostly farming and dairy city in California's Central Valley. His path to prison is a familiar one: Absent parents and little oversight led to a cycle of police trouble and being in and out of foster care and group homes starting around age 8.

"All the households I've been in consisted of some kind of abuse either mentally, verbally, physically — whatever it was. And or some type of drug use in the household," he says. "A horrible experience. Makes you lose faith in people; you start to stop trusting people."

Now, Jones says, he feels like one of the lucky ones. Most inmates released from the California prison system get just $200 and sent off on their own.

Jones had much more than that: He learned how to code with the backing of The Last Mile, a computer tech and business training program for inmates. He had a software job waiting for him with the pop culture movie, games and TV site Fandom.

But he didn't have a home to return to and initially had reservations about the Homecoming Project.

I feel kind of weird even saying we're in a 'program' because it doesn't really feel like that. I think we just have a really strong friendship.

"I was like, man, this feel like adult foster care, like I'm getting adopted again," he says. "Going into a stranger's household, getting judged all over again."

But in a few short months he and hosts Panzella and her boyfriend, Joe Klein, have become genuine friends.

"I feel kind of weird even saying we're in a 'program' because it doesn't really feel like that," Panzella says. "I think we just have a really strong friendship."

Jones agrees. He calls it one of the only stable homes he has ever known. He recently spent the holiday season with Panzella's family.

Organizers say the key difference with this program is that former inmates get to see and experience the dull, but important, day-to-day life of people on the outside.

"They're in the community, in someone's home, able to watch how they buy groceries, clean their home, live a normal life, get up go to work and come home enjoy a TV show," says coordinator Lawyer. "And what that really looks like in real time is essential as an example to our participants who have been completely out of society for 10-plus years."

Panzella and Klein have been with Jones through a dizzying number of firsts since he left prison, including going to the beach, to a bowling alley, using a smartphone, getting on social media and more.

"I didn't know what to order. I'm just like I don't know what this food is like," he says of some restaurant menus that made his head spin. "I grew up eating burritos and pizza pockets at a liquor store, bologna sandwiches and Top Ramen" Jones says. "That's been my diet my whole life so like going to a restaurant and eating some crab dumplings, that's good! And Korean BBQ."

Jones has reunited with a teenage son and a daughter. But he's still trying to reconnect and get custody of another daughter in his hometown of Tulare. She is now in foster care.

It's complicated. It's difficult.

But his new roommates — with support from Impact Justice — have helped him navigate it all.

That's a big deal for him.

And like a lot about the program, something he didn't expect.

"Honestly, if it wasn't for this situation and the sacrifices and things that Joe and Tamiko were able to do, I don't know exactly how far along I would be," he says. "I'm only able to start work and do all this stuff because of that assistance that they gave me immediately when I got out."

Editor's note: NPR plans to follow the Homecoming Project as participants adjust to life after prison.