Accessibility links
'Fence' Shows That In Sports, Sometimes It's Not About Winning C.S. Pacat's comic about rivalries and relationships in the overheated world of elite high school fencers stars a brash outsider up against a sleek yet surly prodigy at the top of his game.

'Fence' Shows That In Sports, Sometimes It's Not About Winning

'Fence' Shows That In Sports, Sometimes It's Not About Winning 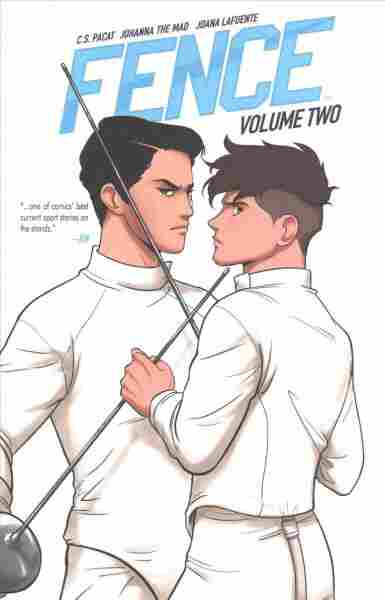 by C. S. Pacat and Johanna the Mad

What's more of a turn-on than sweat and rivalry? Not much — which is at least part of the reason why a healthy strain of sports-centric titles has long flourished in the world of Japanese manga. Whatever your game, you can almost certainly find a translated import: from baseball (Ace of Diamond) and soccer (Giant Killing) to less expected sports like ballroom dancing (Welcome to the Ballroom) and even the board game Go (the legendary Hikaru no Go). Though these series revolve around competitions, winning is really beside the point. Oh, sure, there are probably a few readers who turn to Kuroko's Basketball or Haikyu!! for the on-court action, but the real draw is the chance to vicariously experience the simmering emotional fixations the athletes develop on one another.

C.S. Pacat knows this. Her Fence series (this is volume 2) distills and amplifies all the best parts of the typical sports manga, while moving the setting from East to West. Pacat's boys are high-school fencers. You've got the brash, untutored outsider (protagonist Nicholas, who learns to fence from a cranky old guy in a rundown gym), the sleek prodigy at the top of the game (Seiji, one of the nation's best fencers), and a colorful assemblage of also-rans who provide their own unique challenges (to say nothing of play-by-play and snarky opinions). And it all takes place at a boarding school where — squeal! — Nicholas and Seiji room together. One of the downsides of a sports rivalry is that the rivals are usually on opposing teams, meeting face-to-face only at games. But Pacat has no patience for delay; she puts her heroes in each other's pockets from the start.

In 'My Brother's Husband Vol. 2,' Family Values (And The Value Of Family)

She goes even farther than that, though. In sports manga, the rivalries are fairly obviously standing in for forbidden gay attraction. In Fence, that attraction isn't forbidden in the least. Popular upperclassman Aiden, in particular, dates a different guy every week and is continually surrounded by an adoring cluster of fanboys. (In a cute twist, instead of putting hearts in their eyes, artist Johanna the Mad gives them heart-shaped mouths when they coo over their idol.) Petite Bobby wears skirts, rows of earrings and a cute, bow-tied ponytail or double buns. None of the other boys treat Aiden or Bobby as in any way out of the ordinary — except to warn each other about Aiden's playboy ways.

In this, Fence is a lot like Ngozi Ukazu's hockey comic Check, Please! Ukazu also normalized her queer characters. But Fence is much more faithful to its particular inspiration — and, it must be said, far less imaginative. Pacat's mission is to deliver the emotional ups and downs of a sports manga as authentically as possible; she even reproduces key bits of dialogue nearly verbatim from other titles. Her storylines are familiar, too. Nicholas' Cinderella-like yearning to prove himself, Seiji's alienation, the absurdly drawn-out team tryout process: This is well-trodden turf. But then, it's supposed to be.

In sports manga, the rivalries are fairly obviously standing in for forbidden gay attraction. In 'Fence,' that attraction isn't forbidden in the least.

Johanna the Mad underlines and bolsters Pacat's goal through the simple strategy of restraint. Her clean lines and minimal detail create a sense of transparency. The drawings don't call attention to themselves except at key moments, like when Nicholas dons his dapper school uniform for the first time. (Squeal!) When the guys are actually fencing, the art really delivers. These panels are page-turners, visually dynamic and narratively exciting. Occasional pointers and explanations clarify the rules of this somewhat esoteric sport. And it should go without saying that these boys are the handsomest lot you're going to see in comics this year.

People read comics for all sorts of reasons, and those reasons aren't always what you'd expect. Nicholas may fight to become a better fencer in these pages, but it's his psychological battles that give Fence its reason for being. If you want to learn about fencing, check out some YouTube videos. If you want to know whether Nicholas has a chance with Seiji, read Fence.