Accessibility links
The LAUSD Teacher Strike's Class Size Conundrum Leaders of LA's teachers union have made class-size reduction a centerpiece of their negotiations. But researchers disagree on whether high price of smaller classes is worth it. 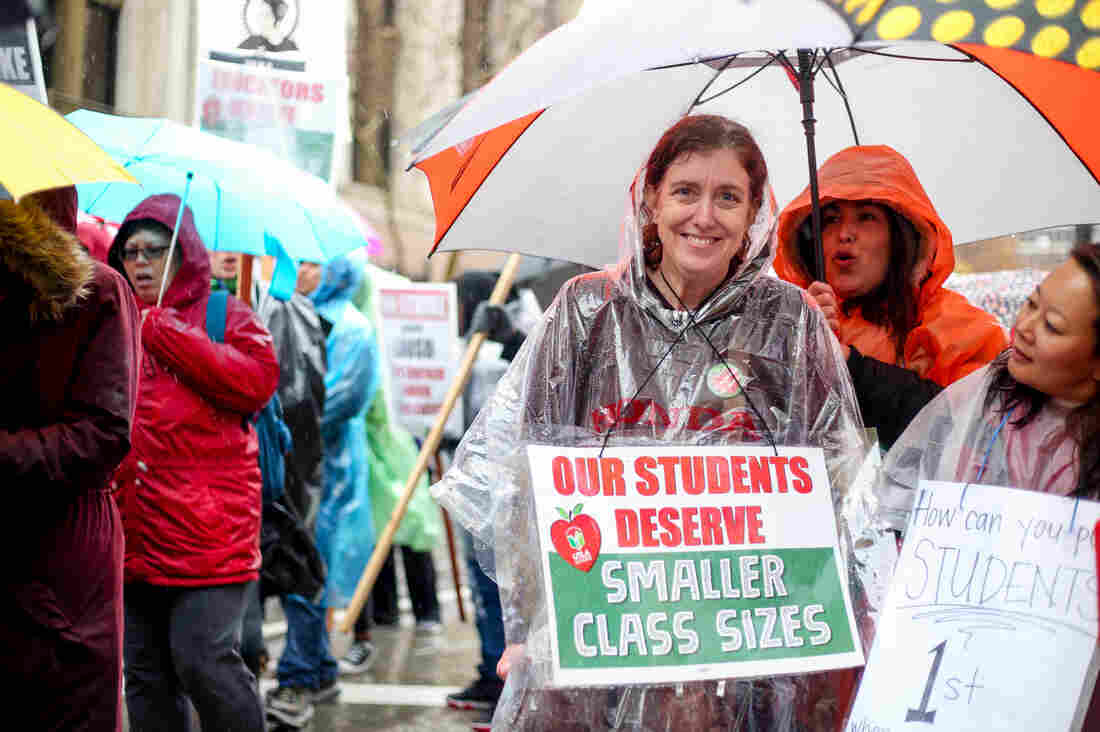 On the first day of the teacher strike, demonstrators marched in downtown Los Angeles for, among other things, more nurses, librarians and counselors, and smaller class sizes. Roxanne Turpen for NPR hide caption 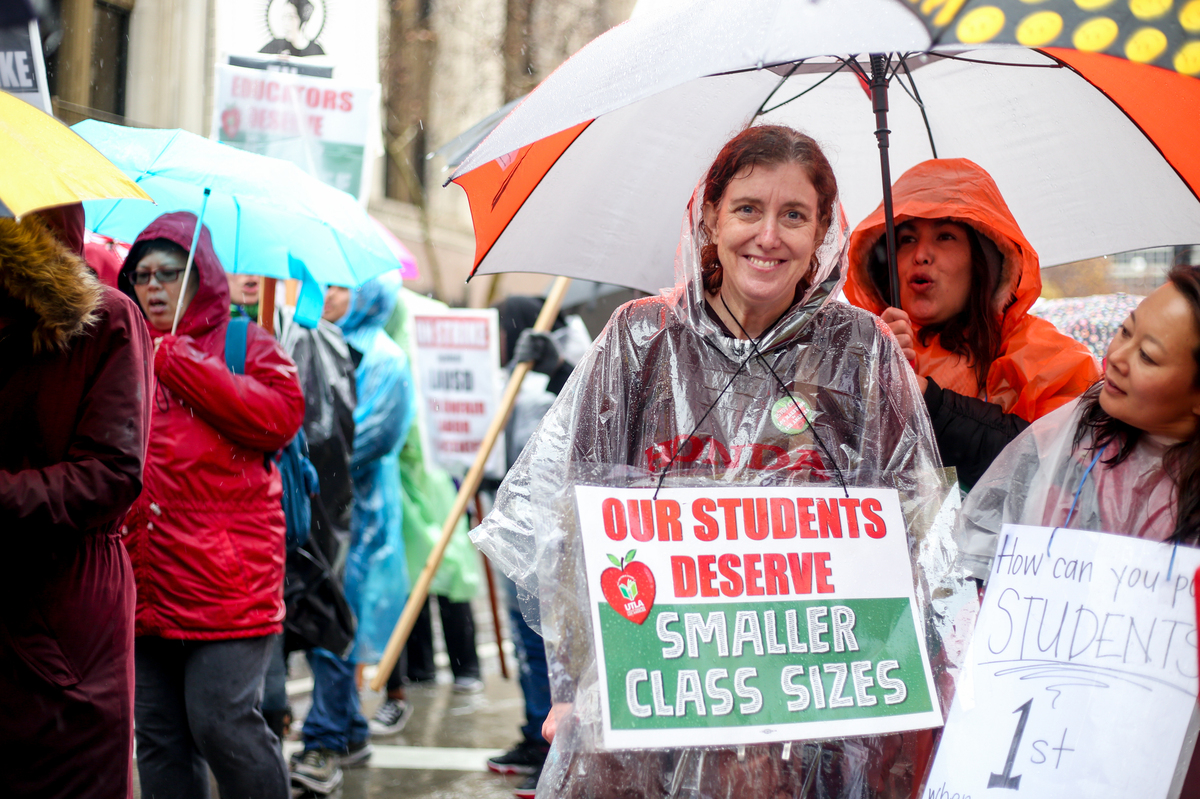 On the first day of the teacher strike, demonstrators marched in downtown Los Angeles for, among other things, more nurses, librarians and counselors, and smaller class sizes.

Los Angeles science teacher Michele Levin knows she caught a break: She only has about 33 students in each of her classes at Daniel Webster Middle School — pretty small, by district standards. In most LA Unified School District middle schools, the largest core classes have 37 kids — with other classes sometimes as large as 46. That's compared to a national average of 26 to 28 students at similar middle schools."We're at the whim of the district for class size," Levin said as she picketed on the first day of her union's strike against LAUSD.

Leaders of United Teachers Los Angeles have made class-size reduction a centerpiece of their negotiations with the district, a move that's galvanized the union's rank-and-file and won broad public support for the strike. Union leaders are demanding a complete rewrite of the district's class size rules, aiming to make current classes smaller and give the district less power to make them bigger.

To Levin, the benefits are clear: A smaller class means each student gets more than her fleeting attention. It means she can actually return parents' phone calls. It means 150 papers to grade at home each night, instead of 200.

LAUSD officials have proposed reducing class sizes by a handful of students in certain schools, subjects and grade levels. And while they say they wish they could go further, they also say they're running out of money to spend on the union's demands. (UTLA leaders dispute this claim, saying they think the district is hiding money.)

But if the district could scare up more money, is class-size reduction the best way to spend it? 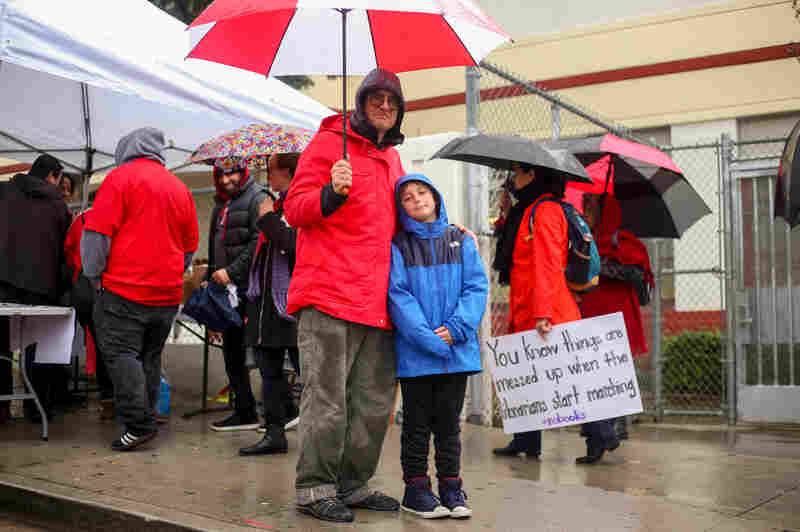 "I'm a teacher, and I brought my son with me to strike," Ed Weber said earlier this week. "If we don't stand up now the quality of our education will continue to be eroded." Weber, pictured with his 8-year-old son, Jasper Weber, has been a teacher in Los Angeles for 23 years. Roxanne Turpen for NPR hide caption 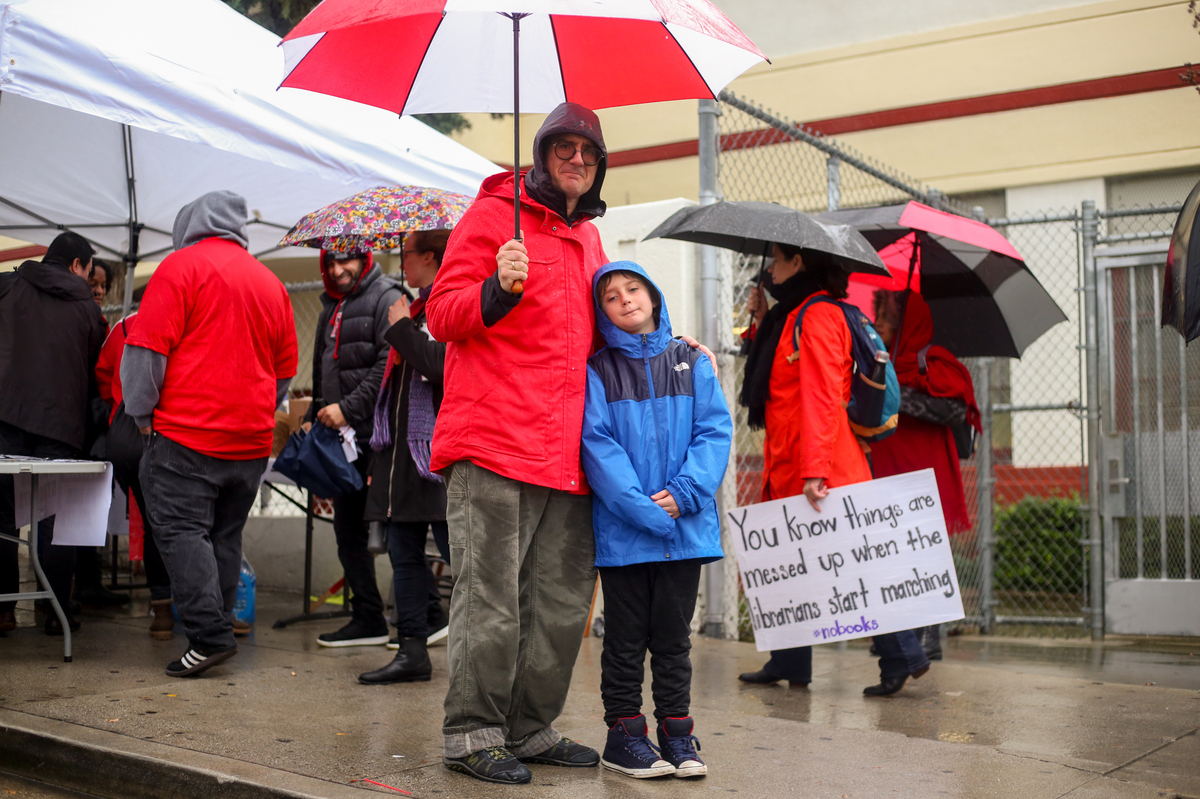 "I'm a teacher, and I brought my son with me to strike," Ed Weber said earlier this week. "If we don't stand up now the quality of our education will continue to be eroded." Weber, pictured with his 8-year-old son, Jasper Weber, has been a teacher in Los Angeles for 23 years.

There are studies, if few and far-between, to support parents' and teachers' intuition that smaller classes are better for kids. But researchers disagree whether the high price of even a marginal reduction in class size produces enough benefits to be worth the price tag, especially when it comes at the expense of another program that might help high-needs students.

"Reducing class size is one of the most expensive things you can do in education," says Matthew Chingos, who runs the Urban Institute's Center on Education Data and Policy. "You always have to think about the intervention in the context of what it costs."

What the researchers say

According to Chingos, one of the highest-quality studies on class size came out of Tennessee in the 1980s. It looked at students from kindergarten to third grade, and it found students in the smaller classes — from 13 to 17 kids — scored markedly better on tests and were more likely to go to college than students placed in larger classes. But the "larger" classes in that study consisted of 22 to 26 students.

That's much smaller than the maximum class sizes being discussed in LA, where district officials propose spending $130 million to reduce some classes sizes by only a few students. Here's what the district is offering:

Chingos isn't convinced these slightly smaller class sizes will result in material benefits to students — especially if they come at the cost of some other program.

"If you had an extra $1,000 per kid to spend," Chingos says, "it's not clear that you would definitely want to spend it on smaller classes versus paying your teachers more, providing more money for textbooks, for a music program or after-school activities."

By district estimates, the money LAUSD is currently devoting to a class-size reduction proposal could easily meet other union demands: a full-time nurse in every LAUSD school; a full-time librarian in every middle and high school; more counselors, deans and social workers.

There are studies that suggest small classes don't significantly impact student learning. Education researcher John Hattie argues small classes make too small of a difference to be worth it.

But Bruce Baker, an education policy professor at Rutgers University, takes a different stance: He believes research about the benefits of smaller classes is more conclusive that smaller class sizes bring benefits with them.

Baker acknowledges the benefits should be weighed against the high cost of class-size reduction — but unlike Chingos, he doesn't think there are that many ways to spend the money better.

"Class-size reduction is expensive," Baker says, but "it is unclear that similar or greater gains can be achieved for measurably less."

School district Superintendent Austin Beutner says he, too, wants to reduce class sizes, but the district's also offered teachers a 6 percent wage increase — and it doesn't have more money to spend.

"Could we take a portion that's been set aside already ... for a salary increase, and further reduce class size? We'd entertain that notion," he told KPCC/LAist on Sunday.

One last reason why this matters

Setting aside the research and the question of costs and regulations: The ground truth is parents want small class sizes.

The School Board's View Of The Los Angeles Teacher Strike

The School Board's View Of The Los Angeles Teacher Strike

There's a classic LA School Board moment from a meeting in 2013, during a debate about class-size reduction, when then-board member Steve Zimmer issued a stark reminder. He said LAUSD is competing with charter schools, which are publicly funded but staffed with non-union teachers, counselors and other personnel.

"Here are some websites of charter schools," Zimmer said, holding up printouts. "And on the front page of every website is class size — 20-to-1; 22-to-1."

He started tossing a half-dozen printouts to the floor. His message was clear: Other schools are using small class sizes as a selling point.

"You just get to give more individualized, personalized attention ... when there are less students in your classroom," Zimmer, a former teacher, said. "And if you don't believe that, and you don't believe me ... trust the choices that parents have made."

Embedded in Zimmer's argument was a warning: If LAUSD doesn't offer smaller classes, parents will flee the district for schools that will — and not always schools with unionized teachers.

That's already started happening. LA's charter school enrollments have skyrocketed while LAUSD enrollment has gone down. And because funding from the state is dictated by enrollment and attendance, that means a smaller and smaller stream of funding for the district.

With every student who leaves, it becomes more difficult for the district to afford a lot of the things parents want — including smaller class sizes.