Accessibility links
Like Those Low Gas Prices? Thank The Global Oil Glut Gasoline prices have been dropping steadily for months; they're averaging right around $2.25 per gallon nationally. Enjoy, but don't get used to them, analysts say. 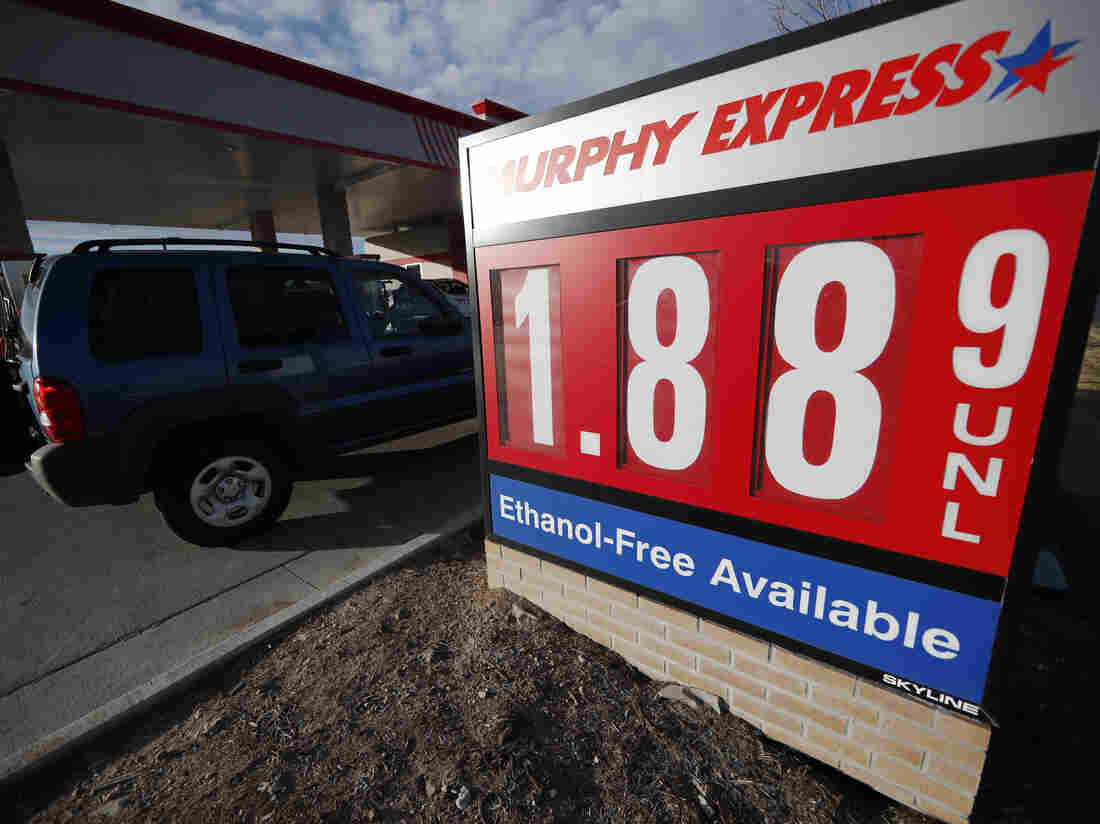 Motorists drive past a sign advertising regular gasoline at $1.88 per gallon at a station in Longmont, Colo., on Dec. 22, 2018. Falling gasoline prices have given drivers a little extra cheer this winter. David Zalubowski/AP hide caption 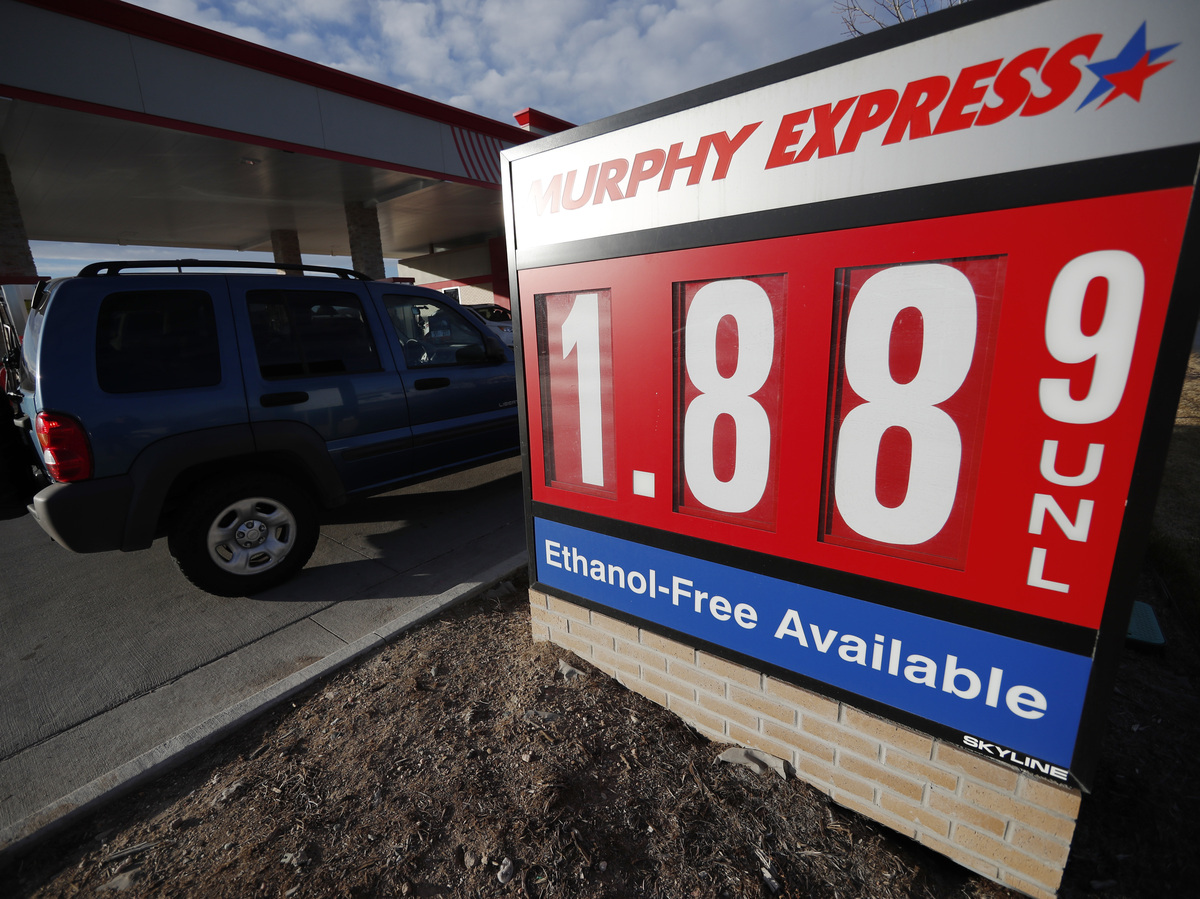 Motorists drive past a sign advertising regular gasoline at $1.88 per gallon at a station in Longmont, Colo., on Dec. 22, 2018. Falling gasoline prices have given drivers a little extra cheer this winter.

Gas is relatively cheap these days. Enjoy those low prices, but don't get used to them, analysts say.

An oversupply of oil on the world market has triggered a steady slide in gas prices, bringing Americans some of the cheapest gas in years as 2019 kicked off.

Nationally, regular was averaging around $2.25 per gallon at the start of January — the lowest price for this time of year since 2016, according to AAA.

But recently, at a Costco gas station in Washington, D.C., Sylvie Tiadem was delighted that it cost her only $26 to fill up. "Oh, my goodness!" she said.

That's down from the nearly $40 it cost her when gas prices were higher. "Expenses are growing everywhere, but when one goes down, I'm happy," Tiadem said.

Gas prices vary across the country. They're cheaper in the South and pricier in the West, according to AAA's data. But in general, drivers like Tiadem have been happy for months now.

"We started to see prices decrease in October, and they came down slowly but consistently since then," says Jeanette Casselano, a spokeswoman for AAA. "It still has a lot to do with where you are, but regardless, gas prices are cheaper than we've seen them in 2018."

Multiple factors affect the price of gasoline — primarily taxes, distribution, refining and the price of crude oil, the raw material used to make gas. In this case, the reason for the price drop is clear: It's driven by a drop in the price of oil, says Kelsey Hallahan, a petroleum markets analyst with the Energy Information Administration.

Prices for crude oil, which accounts for more than half of the final price a consumer pays for gasoline, fell dramatically in October.

Earlier in the year, Saudi Arabia and Russia were working together to cut production and send oil prices higher.

But then they changed course. Among other things, President Trump pressured Saudi Arabia to hold steady on oil production, out of concern that sanctions on Iran would cause Tehran to retaliate by trimming output, then cutting into global supply. And when the Iran sanctions were effectively delayed, global oil supplies kept edging higher. Global demand was not keeping pace — especially as the Chinese economy shows signs of slowing.

American suppliers, meanwhile, kept pumping out more and more oil, particularly over the past three years. Oil prices were high enough that it was worthwhile to extract oil that's difficult and expensive to get out of the ground, Hallahan says.

But then that increase in U.S. production contributed to the oversupply, helping drive prices back down — a classic cycle in the oil industry.

Lower oil prices are tough on producers, although Hallahan says American companies have been doing OK.

But the resulting drop in gas prices makes consumers happy. It means more money directly in more people's pockets — and the difference is particularly significant for those considered middle class and low income, who plunk down a larger chunk of their disposable income on fuel costs.

Scott L. Montgomery, an author and affiliate faculty member at the University of Washington who specializes in energy, says gas prices have a huge psychological impact.

More Potholes, Traffic Jams On The Horizon Unless Interstates Are Fixed, Report Finds

"We have to remember that the price of gasoline is on very large signs everywhere we drive," he says. "So it is the price that sticks in consumers' minds."

At the same time, a drop in gas prices can have larger consequences for society, because it influences the kinds of choices drivers make when buying new cars.

When gas prices are low, people are less motivated to cut back on driving or to seek out smaller, more fuel-efficient vehicles — which, in turn, makes it harder for the U.S. to reduce its greenhouse gas emissions and curb its contribution to climate change.

"People really react very quickly to this," Montgomery says. "They believe that they're saving a lot more money than they actually are. And so they will buy more SUVs or bigger cars."

The U.K. Economy Is Growing — But Its Energy Use Is Shrinking

But don't count on gas prices staying low. Oil prices have started to rise again. OPEC and Russia are planning to curb production to get prices higher.

Hallahan, the petroleum analyst, has a simple prediction: "We're expecting that gasoline prices will go up in 2019, because we expect crude oil prices to also rise."