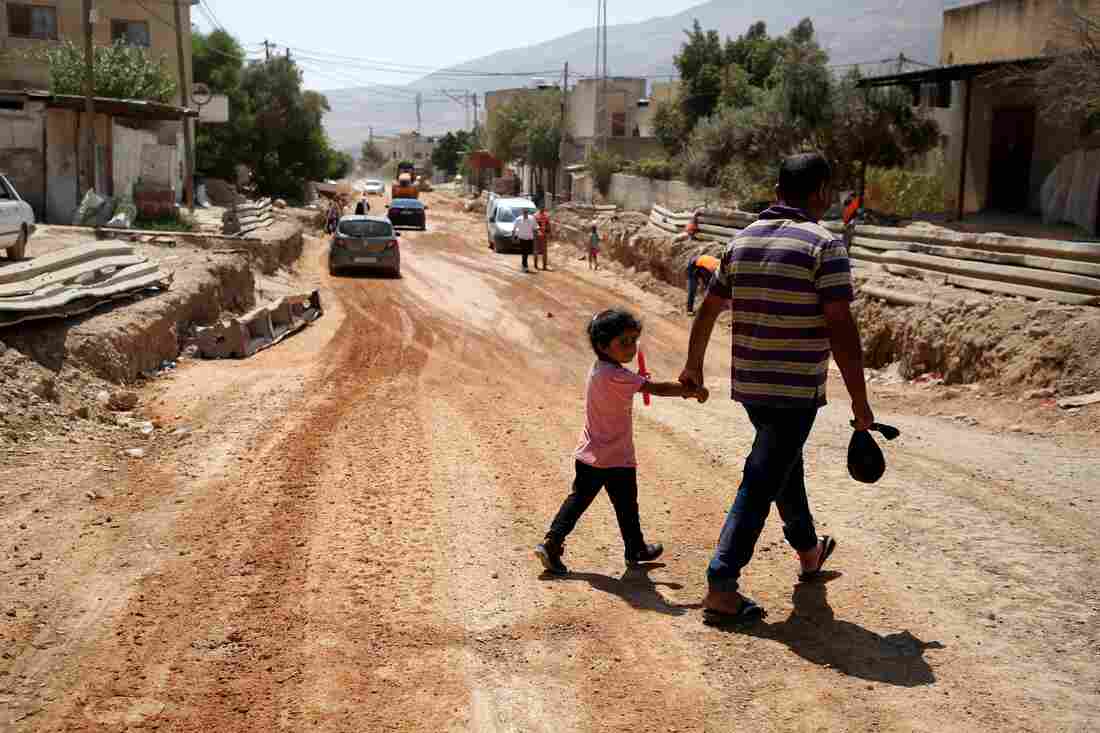 A father and his daughter cross a street under renovations as part of a U.S. aid grant in the village of al-Badhan, north of Nablus in Israeli occupied West Bank in August 2018. Jaafar Ashtiyeh/AFP/Getty Images hide caption 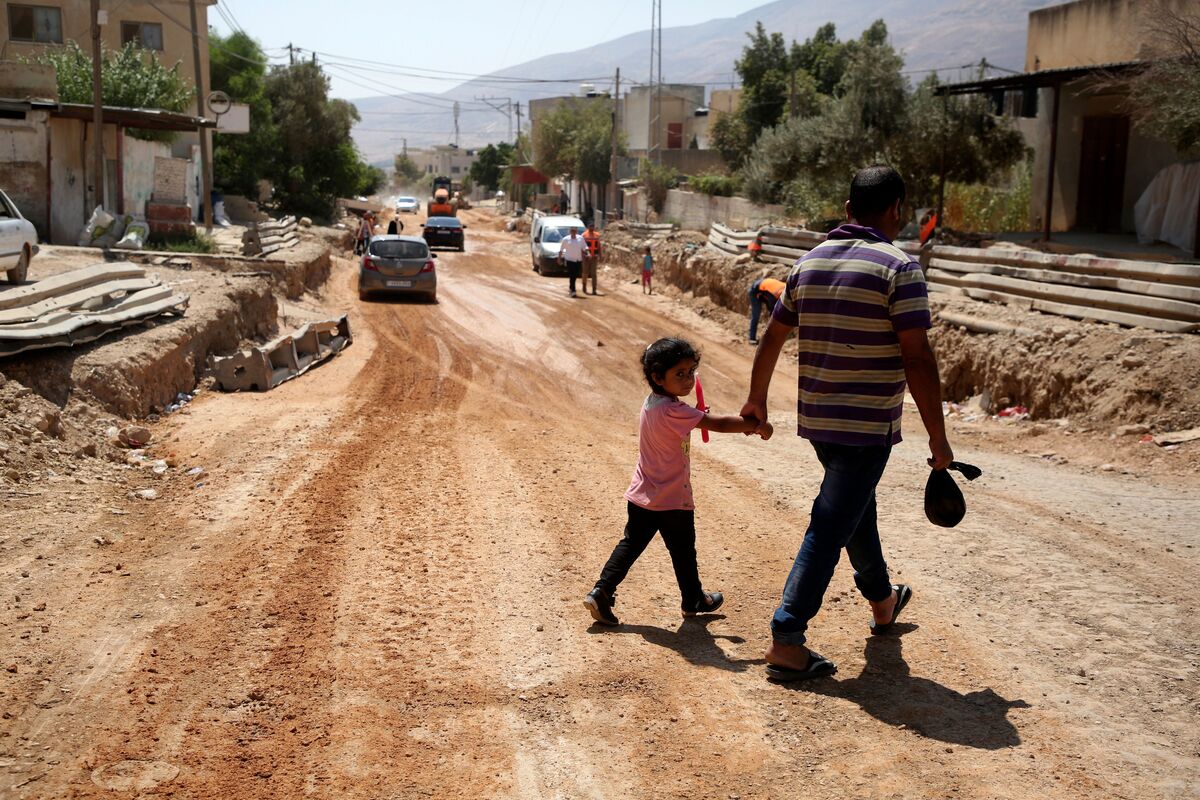 A father and his daughter cross a street under renovations as part of a U.S. aid grant in the village of al-Badhan, north of Nablus in Israeli occupied West Bank in August 2018.

The White House has blocked an emergency effort to finish major U.S.-funded school, water and sewage projects in the West Bank and Gaza Strip, according to documents reviewed by NPR.

It is the latest of a series of moves by the Trump administration to shut down U.S. aid to Palestinians, which is scheduled to end Feb 1.

In the West Bank, a nearly complete multimillion-dollar sewage network in Jericho will have to be buried under asphalt and abandoned, and a $1.4 million school facility under construction in the Bethlehem area will be left behind, according to a recent document from the U.S. Agency for International Development.

Anera, the U.S.-funded aid group carrying out the school project, recently received notification from the U.S. government that it may have to tear down the school, said Sean Carroll, the head of Anera.

USAID, which oversees these projects, will lay off most of its local staff within months, U.S. officials say. They spoke on condition of anonymity because they were not authorized to speak about the matter publicly.

"To abandon schools and water systems while in the midst of construction represents the worst instincts of this administration," said Dave Harden, who oversaw U.S. aid programs in the Palestinian territories under the Obama administration. "This peace team has no shame." 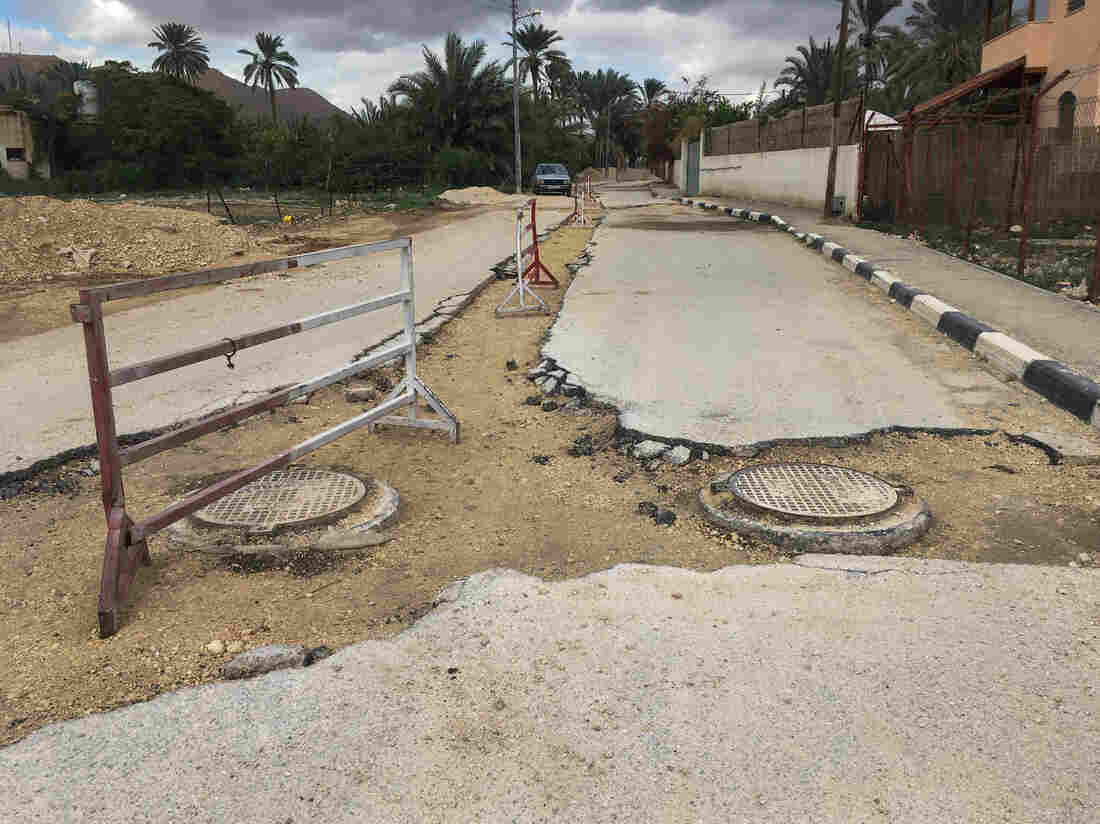 A nearly complete, multimillion-dollar sewage network being built under the roads of Jericho, in the West Bank, will have to be buried under asphalt and abandoned because of new restrictions on Palestinian aid, U.S. officials warn. Daniel Estrin/NPR hide caption 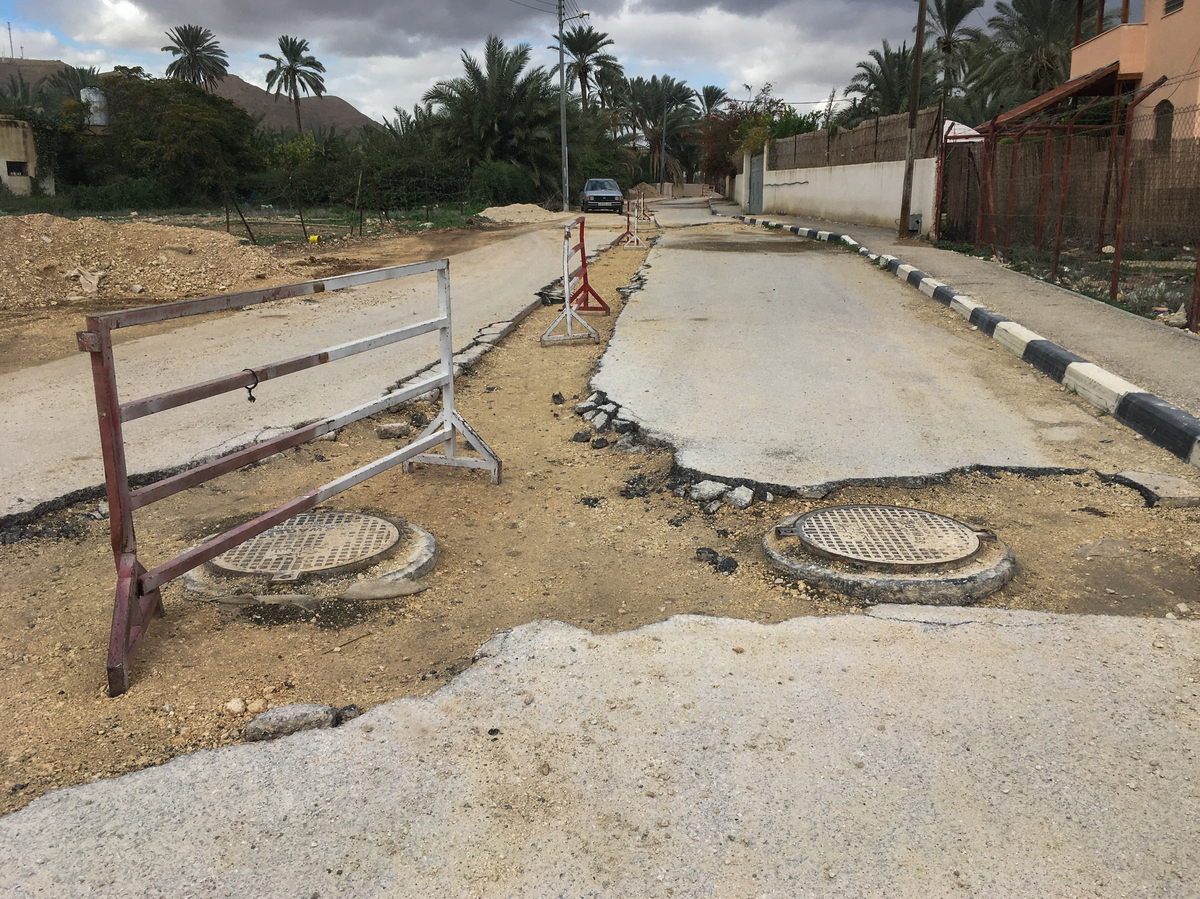 A nearly complete, multimillion-dollar sewage network being built under the roads of Jericho, in the West Bank, will have to be buried under asphalt and abandoned because of new restrictions on Palestinian aid, U.S. officials warn.

After the aid cuts, there was still some assistance, about $30 million according to one official's estimate, being spent on projects started in previous years.

But that remaining money was put in jeopardy with the Anti-Terrorism Clarification Act, which President Trump signed into law in October. Under the act, starting next month, if Palestinians receive U.S. aid, the Palestinian Authority could be compelled to pay millions of dollars in compensation to families of American victims of past Palestinian attacks.

The Palestinian Authority rejects responsibility for attacks and says it fights terror. The authority has informed the U.S. that it will not accept aid money spent under these conditions, U.S. officials say.

Scott Anderson, a former State Department attorney, wrote that "the Palestinian leadership has determined that the limited U.S. foreign assistance currently received is far outweighed by the potential liability to which they would be subjected if they were to accept it."

By Feb. 1, the officials say all the government's aid programs for Palestinians will end.

USAID officials spent months quietly seeking a workaround in order to save seven major Palestinian infrastructure projects from being abandoned: five water and sewage projects and two schools, government documents show. Aid officials drafted a request for the government to approve about $17 million in emergency funds for these projects, drawn from a pool of money labeled Development Assistance, which would be permitted under the anti-terrorism act.

In a draft proposal, USAID officials argued that finishing these projects would "mitigate reputational and security risk to the U.S. government" and avoid "significant waste" of government investments in water and sewage systems already being built to serve tens of thousands of Palestinians. Abandoning these projects "could contribute to civil unrest in a community already experiencing major water shortages," USAID officials said in the proposal.

The White House rejected the funding proposal, according to an internal email from the National Security Council reviewed by NPR.

The U.S. ambassador to Israel supported the proposal, so as not to leave the infrastructure projects unfinished, according to a U.S. official, who spoke on condition of anonymity to discuss conversations he was intimately involved in.

The official said others in U.S. government agencies believe Jared Kushner, President Trump's point man for Israeli-Palestinian peace, was the one who blocked the initiative. A spokesman for Kushner did not immediately comment.

A tweak to the anti-terrorism act could permit Palestinian aid money to continue, but it is unlikely Congress would be able to amend the law before the funding cutoff goes into effect Feb 1. U.S. funding for the Palestinian Authority security forces, which help maintain public safety in the West Bank, could also be cut under the law.

On Thursday, a USAID team drove over torn-up roads in the West Bank desert city of Jericho where they had installed pipelines to connect about 10,000 Palestinians' homes to a sewage treatment plant. "USAID Invests in Water Infrastructure," a colorful billboard reads.

But this investment is likely to be abandoned. U.S. officials say they'll pave the dug-up roads to avoid hazards, leaving the unfinished sewage system hidden underneath.

Jericho is in desperate need of the project, said Ehab Njoum, a municipal engineer. Only about 15 percent of the city is hooked up to a sewage treatment plant, he estimated. When most Palestinians in the city flush their toilets, the waste drops into private pits next to their homes. Sometimes these pits overflow, and there is a risk that untreated sewage can seep into and contaminate groundwater.

Jericho's Mayor Salem Ghrouf said he has never seen anything like what the U.S. is doing, "stopping funding for an important project like this one."

He added, "this is political pressure on our president, Mahmoud Abbas."