Accessibility links
In A Chaotic Week For U.K. Politics, What's Next For Brexit? Here's what to know about key issues during this extraordinary and chaotic moment in British politics. The U.K.'s deadline to leave the European Union is March 29.

In A Chaotic Week For U.K. Politics, What's Next For Brexit?

In A Chaotic Week For U.K. Politics, What's Next For Brexit? 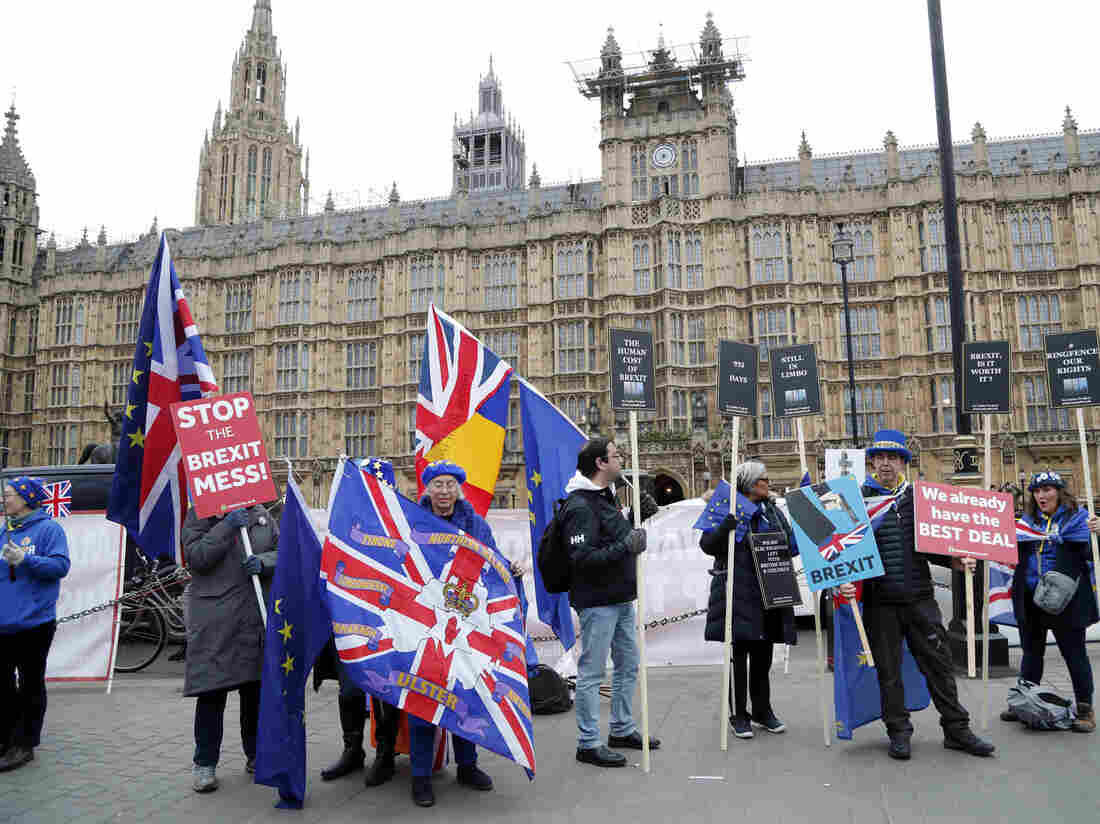 Demonstrators protest opposite the Houses of Parliament in London on Tuesday. Frank Augstein/AP hide caption 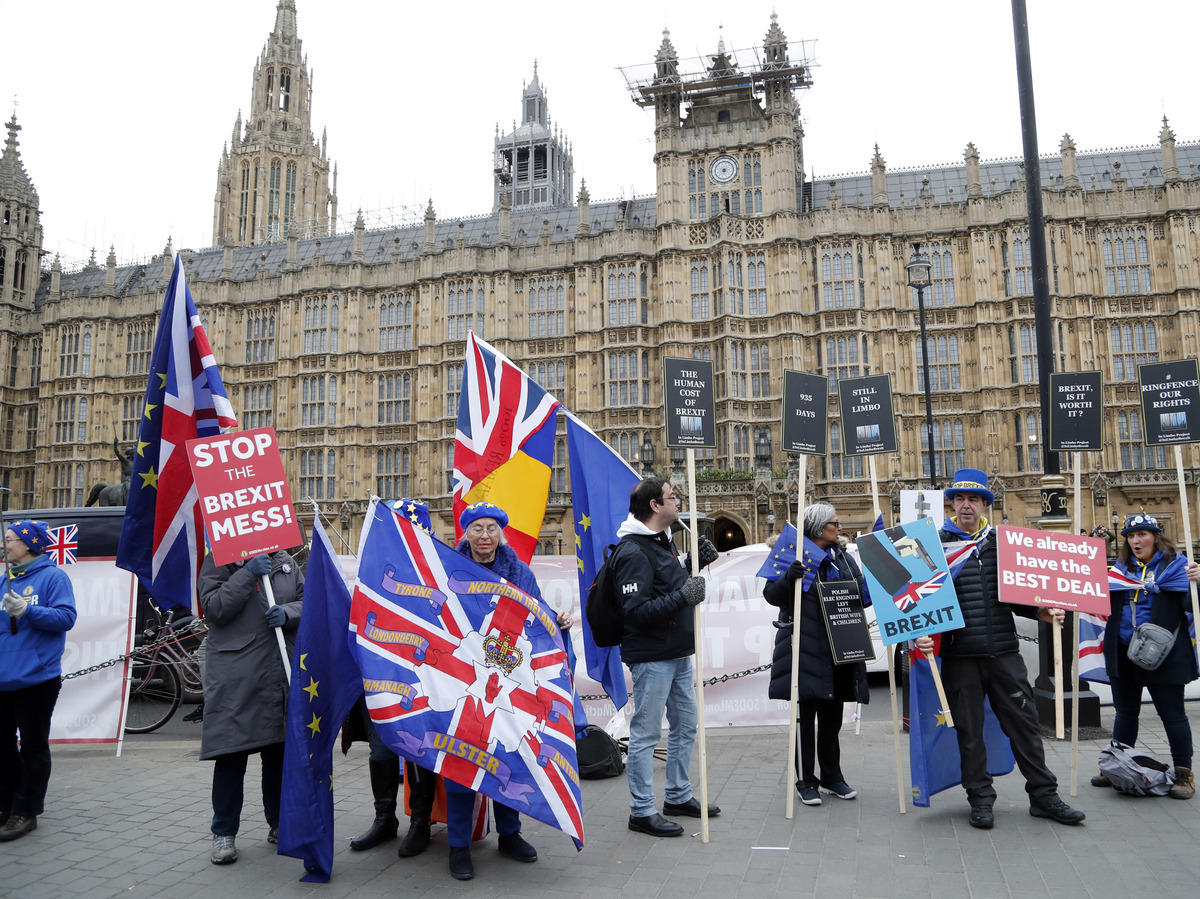 Demonstrators protest opposite the Houses of Parliament in London on Tuesday.

British Prime Minister Theresa May's Brexit plan went down to an historic defeat in Parliament on Tuesday. The next day, she narrowly survived a vote of no-confidence in her government. This Monday, Jan. 21, she'll have to tell Parliament what her Plan B for Brexit is — and will submit that plan to a vote on Jan. 29.

Here's what to know about key issues during this extraordinary and chaotic moment in British politics.

After Tuesday's staggering loss, most politicians would have resigned. Why is Theresa May still in office?

Members of Parliament belonging to May's Conservative Party feared that if they voted down her government, it would trigger a general election and open the door to Jeremy Corbyn and his opposition Labour Party taking control of the government. Consider this Brexit whiplash: On Tuesday, more than 100 Conservative parliamentarians voted against May's plan. A day later, they rallied to support her and voted to save her government.

What are the prime minister's options now?

May is reaching out to Labour and other political parties to find out if there is a majority for anything related to Brexit in the fragmented British Parliament. If she can find consensus, she could go back to Brussels and ask for concessions, one of which would likely focus on resolution of a major sticking point in Brexit negotiations — the border between Ireland and Northern Ireland.

Although May insists she won't, she could try to let the clock wind down toward the March 29 deadline to leave the European Union and use the threat of a no-deal Brexit — a prospect most Britons dread because of the economic disruption it would likely cause — to force Parliament to pass a version of her plan. But Corbyn has already labeled that "blackmail" and many consider it a bluff, betting no government would risk the economic damage of walking away from the giant EU market with no future arrangement.

The prime minister could also try to deliver a "softer" Brexit that would keep the U.K. closer to the European Union — for instance, by staying in the EU customs union. But that would enrage hard-line Brexiteers in her own party and would require support from other parties in Parliament.

In short, the prime minister has no good options — only bad and worse.

What's the European Union reaction to all this, and how will it proceed?

The EU is not happy that Britain's prime minister can't get the Brexit deal — on which both the EU and U.K. agreed — through her own Parliament. Brussels says the ball is in May's court and believes it is not the EU's job to help the U.K. solve its own domestic political problems. There is little sympathy for Britain's predicament.

The Leave campaign "lied to the people and what they [the public] have chosen is not possible," French President Emmanuel Macron said this week, referring to the rosy picture Brexit campaigners first painted of leaving the EU. "Good luck to the representatives of the nation, who have to implement a thing which doesn't exist."

Still, Brussels does not want a no-deal Brexit because it would hurt EU economies. It also does not want to be perceived as punishing the U.K. for leaving. The EU has repeatedly said it won't renegotiate the Brexit agreement. Nor does the EU want to extend the March 29 deadline if it's merely to give the U.K. more time to repeat the same old arguments in Westminster.

Even if a deadline extension were granted — and that's a big if, because it would require the consent of all 27 remaining countries — Brussels would want a specific plan from May on how she'd get a deal through Parliament rather than repeating her same failed strategy.

What has been the biggest sticking point in Brexit negotiations between the EU and the U.K.?

The big conundrum is the future of the Irish border, an issue that received scant attention in the lead-up to the 2016 Brexit referendum. The United Kingdom and Ireland are currently part of the same EU economy and the border between Northern Ireland, which is part of the U.K., and the Republic of Ireland is practically invisible. Travel is seamless. After March 29, though, Northern Ireland and Ireland will be in separate economies, which could require customs checks and border posts that could reignite political tensions stretching back to the days of Northern Ireland's "Troubles."

The EU and May's government have agreed to what they call temporary arrangements to avoid a "hard" border, at least until the two sides can reach a final agreement. Many Brexit supporters want a time limit to this "temporary arrangement" in case talks break down and the U.K. remains caught in the grip of the EU.

What is the possibility of a second referendum?

Once practically unthinkable, a second vote is now talked of as a genuine option. But it might only come to pass after all other avenues have been exhausted.

There are several factors to consider: First, May, whose administration drives the legislative agenda, opposes a second referendum. Second, Corbyn has also resisted a second referendum — his party's priority is to continue to try and force a new general election. And finally, even if a second referendum were to take place, it is not clear that the result would be different. A majority might still vote to leave EU — including those who would resent being asked the question again.