Accessibility links
How Strong Is The Islamic State In Syria? ISIS has lost almost all its territory, but it claimed a suicide bombing that killed four Americans. The extremist group is still believed to have thousands of fighters who have gone underground. 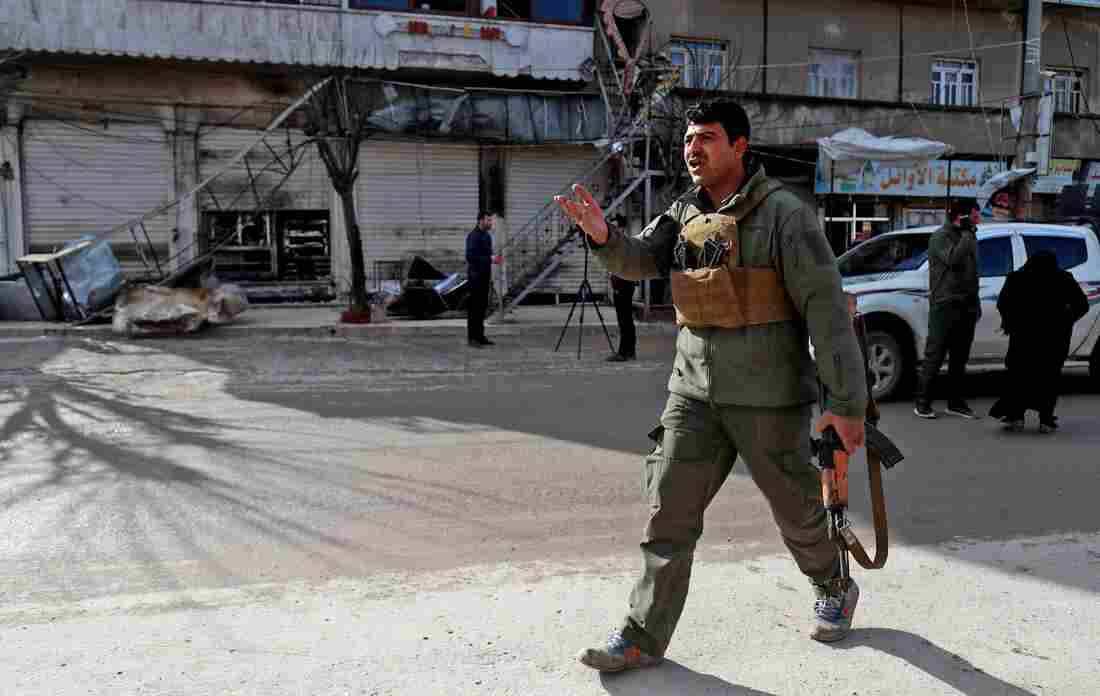 A security force member walks outside a shuttered restaurant Thursday in Manbij, Syria, the site of a suicide attack that killed more than a dozen people, including four Americans, a day earlier. The Islamic State claimed responsibility for the attack. Delil Souleiman /AFP/Getty Images hide caption 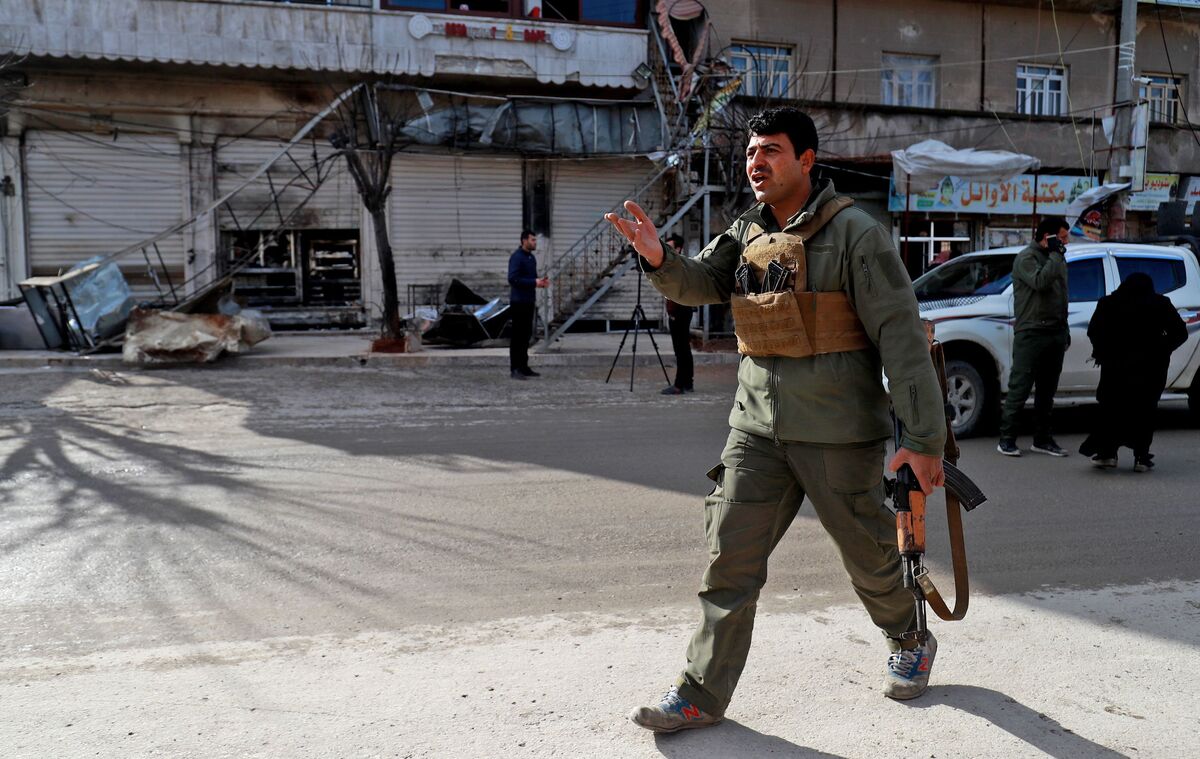 A security force member walks outside a shuttered restaurant Thursday in Manbij, Syria, the site of a suicide attack that killed more than a dozen people, including four Americans, a day earlier. The Islamic State claimed responsibility for the attack.

The Islamic State has jumped back into the headlines by claiming responsibility for a suicide bombing that killed four Americans and more than a dozen civilians at a restaurant in northern Syria.

The attack in the city of Manbij on Wednesday came less than a month after President Trump declared ISIS had been defeated and that it was time to bring U.S. troops home from Syria. Many military analysts, and even fellow Republicans, have pushed back against the president's claim that ISIS is a spent force.

"I strongly urge the president to forcefully respond [to Wednesday's bombing] and ensure we do not withdraw our troops until ISIS is completely destroyed," said Rep. Michael McCaul of Texas, the top Republican on the House Foreign Affairs Committee.

The attack raised a host of questions about the future of ISIS, the U.S. withdrawal and the wider war in Syria.

How strong is the Islamic State in Syria?

ISIS has lost the caliphate, or Islamic State, and almost all the territory it controlled in Syria (and Iraq) at its peak in 2014. However, many fighters are still believed to be in Syria; they've just gone underground.

Many are citizens of Syria and have nowhere else to go. In addition, relatively few foreign ISIS fighters have tried to return to their home countries elsewhere in the Middle East or in the West. The Pentagon and others have estimated ISIS may still have 20,000 to 30,000 members in Syria and Iraq combined.

For these reasons, many analysts believe ISIS retains the potential to mount a comeback, particularly as a guerrilla force waging small-scale attacks. 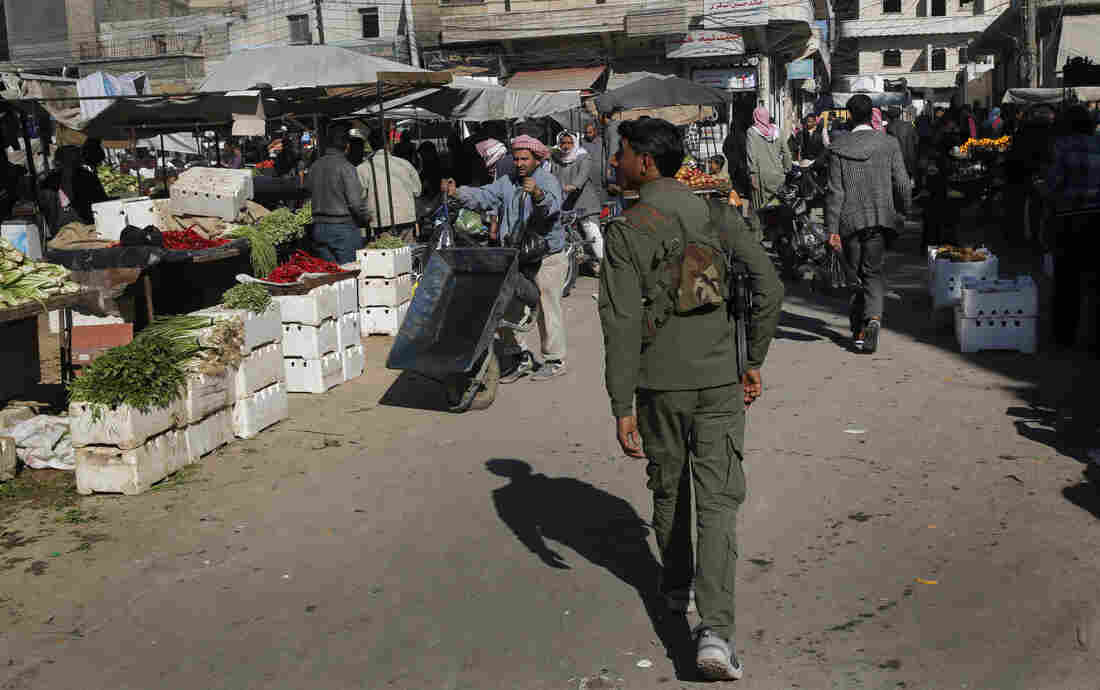 A member of the Kurdish security forces patrols a popular market in Manbij, Syria, last April. The city had been mostly calm since the Kurds and the U.S. drove the Islamic State out of the city in 2016. Hussein Malla/AP hide caption 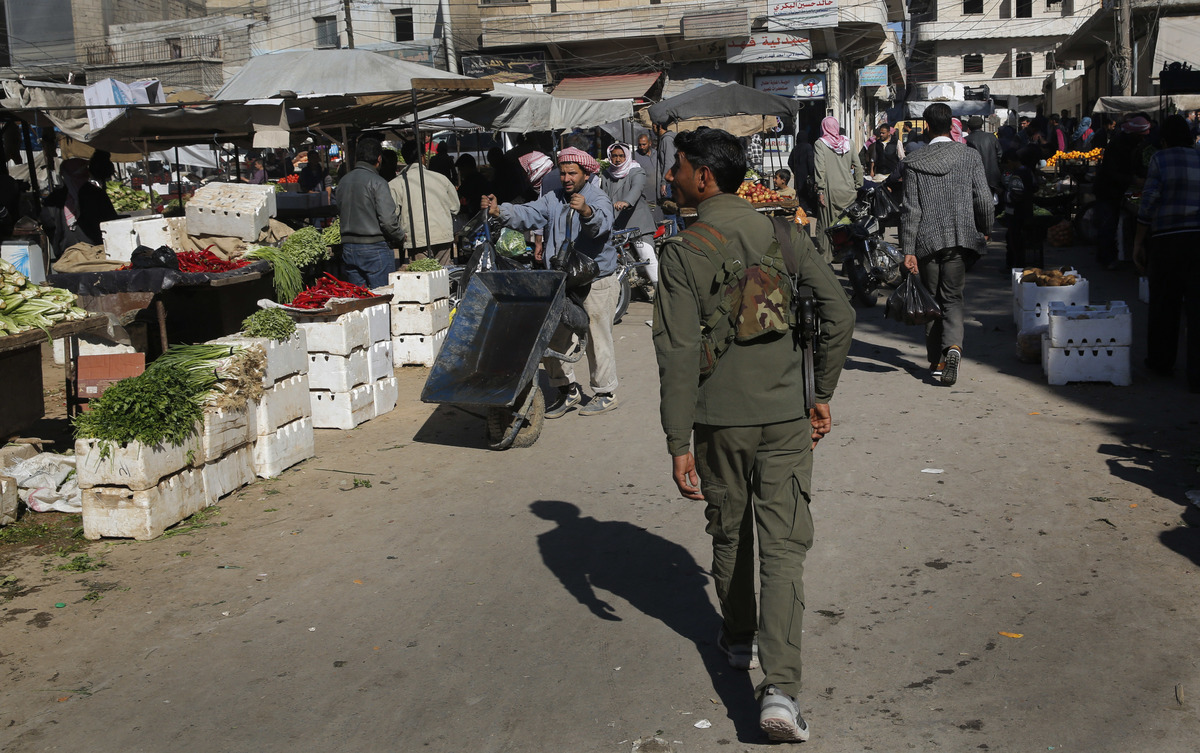 A member of the Kurdish security forces patrols a popular market in Manbij, Syria, last April. The city had been mostly calm since the Kurds and the U.S. drove the Islamic State out of the city in 2016.

Why is President Trump so determined to remove U.S. forces now?

The president has often boasted that he would hit hard at ISIS, and the U.S. military did step up the bombing campaign he inherited from President Barack Obama.

But Trump has also stressed repeatedly that he doesn't want the U.S. to be the world's policeman and that he intends to bring home U.S. troops. The U.S. force in Syria (around 2,000) is smaller than the ones in Iraq (about 5,000) and Afghanistan (about 14,000).

The president has not clearly articulated why he wants to pull out of Syria at a time when most of his own advisers appear to favor a more gradual approach.

Trump's Dec. 19 announcement on Syria caught nearly everyone by surprise, and caused allies and rivals alike to scramble to figure out how quickly a withdrawal will happen and what it means for those still fighting in Syria.

Why was Manbij a target?

Wednesday's attack showed ISIS could still strike in a place the U.S. and its Kurdish partners felt was under control. The U.S. and the Kurds drove ISIS out of the city in 2016, and its been seen as a relative success since then.

Manbij is small, with about 100,000 residents, but has had outsize importance because of its location. Turkey keeps a close eye on the city, which is just 20 miles south of its border. The Syrian government army and its allies are also nearby, and are always looking to reclaim territory the government held before the war erupted.

What would a comprehensive defeat of ISIS look like?

Many analysts point to three things. First, a military defeat that would drive ISIS from its last remaining pockets of territory in Syria's far east. U.S. commanders say they've been making progress but will likely need a couple more months.

Second, Syria needs a political settlement that ends the wider war and resolves questions about who will govern the country. The Kurds now hold the former ISIS stronghold in the northeast, but Syrian President Bashar Assad wants it back. At present, there's no prospect for an end to the war.

The third big challenge is to effectively end the appeal of ISIS's extremist ideology so that it can no longer keep attracting recruits and resources.

Are there parallels to the U.S. withdrawal from Iraq in 2011?

The circumstances aren't identical, but there are similarities. Obama removed U.S. forces from neighboring Iraq at the end of 2011, a time when the Iraqi government seemed to have a relatively firm control on the country.

The concern is that the U.S. is again pulling out before a radical group has been fully defeated, and that ISIS could regroup.

"I saw this in Iraq. And I'm now seeing it in Syria," said Republican Sen. Lindsey Graham of South Carolina.